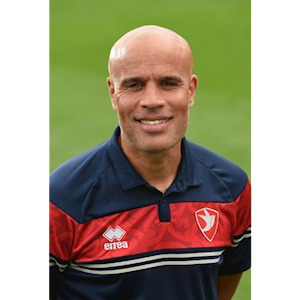 Marcus Bignot joined Cheltenham Town as a first team coach in the summer of 2022.

As a professional footballer, Bignot played primarily as a right-back and began his professional career in 1992 with Telford United.

Following a four-year spell with Telford, Bignot joined Kidderminster Harriers. In his only season at the club, he helped the team to win the Conference League Cup in 1997, and also finish runners-up in the Football Conference.

He then went on to help Ian Holloway's Queens-Park Rangers to a Football League Second Division second-place promotion in the 2003/04 campaign.

Following his retirement, Bignot jumped into management with his former team. In the 2015/16 season, Solihull won the National League North title, winning an impressive 60% of their games.

His success at the midlands-based club helped him to get management roles at Grimsby Town, Barrow, Chester and Guisely, and more recently had an interm manager role with Aston Villa's Women.