Cheltenham Town are delighted to confirm a new re-branded initiative for Under-14 season ticket holders, who will now become Young Robins during 2022/23.

Young Robins is a part of our 'History Makers' season ticket campaign and will entitle those who buy an Under-14 season ticket anywhere inside the stadium to some exciting additional benefits.

With Under-14 season tickets £50 in seating areas and £40 in standing areas (from £1.73 to £2.17 per game) Young Robins will get the following included alongside entry to all 23 home League One matches:

Click here to purchase a season ticket online on our new ticket system.

The introduction of Young Robins will see it replace the Junior Robins scheme going forward but there will be opportunities for Under-16s to watch Cheltenham Town for just £1 in 2022/23.

Our seven 'Kids for a Quid' matches were hugely popular last season, with over 3,600 taking advantage of the offer and this will return again in the upcoming campaign as we look to keep growing our fanbase.

Join us for a sixth season in League One, thanks to a record points haul and the club’s best ever finish under Michael Duff.

*Please note that Young Robins Under-14 season ticket holders must be born on or after September 1, 2008. 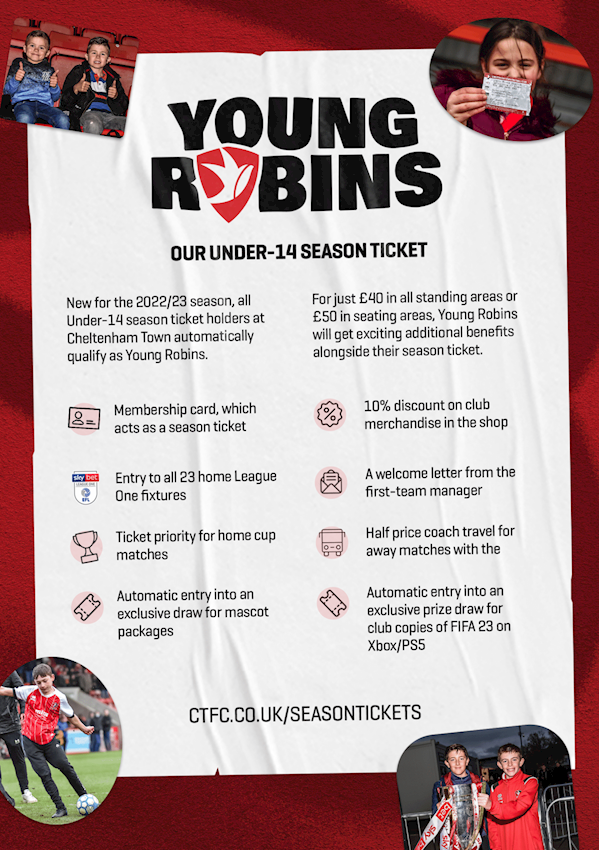