Our brand-new ‘history makers’ mural was formally unveiled at the Completely-Suzuki Stadium this afternoon.

The work, completed in April, was the centrepiece of the club’s season ticket campaign. In the end more than 1,700 season tickets were sold, a club record.

We collaborated with our principal partners at Mira Showers, commissioning Andy ‘Dice 67’ Davies – the founder of the Cheltenham Paint Festival – to create a tribute to the club’s greatest achievements.

This season marks the 40th anniversary of our first title win as a club, securing the Southern Premier Midland Division title at the end of the 1982/83 season under manager Alan Wood.

There have been a further four championships since, bringing the total of successes to five.

Those successes paved the way for the current crop of record breakers, preparing for a sixth campaign in League One which starts at the end of this month.

"Mira’s commitment to the club and local community is long-standing and the new mural is another visible demonstration of that," said Richard Morris, the club's head of commercial.

"Aesthetically it’s given the Stadium a real uplift and with a nod to both the past and present by way of our ‘history makers’.

"I hope it’s something the supporters will enjoy and resonate with when they visit the Completely-Suzuki Stadium this season.

"Partnerships and collaborations with fan experience and community engagement at their core is an area of focus for the club and we hope this will be the first of many over the coming months."

Lewis, the club’s record goalscorer, and May joined Craig Baker, the managing director at Mira Showers and Davies at today’s launch. Gloucestershire Live were on hand to mark the occasion with a special live broadcast from the wall.

"It's an absolute honour to be on the wall," said Alfie.

"It's probably not something I thought I'd see when I first signed but as an achievement it's amazing.

"It's a great feeling to drive in the car park and see yourself up there."

Dave Lewis bagged 290 goals in two spells across 13 years at the club, a record that's unlikely to be bettered.

"It's an absolute honour to be remembered this way, 40 years after we won the title," he said. 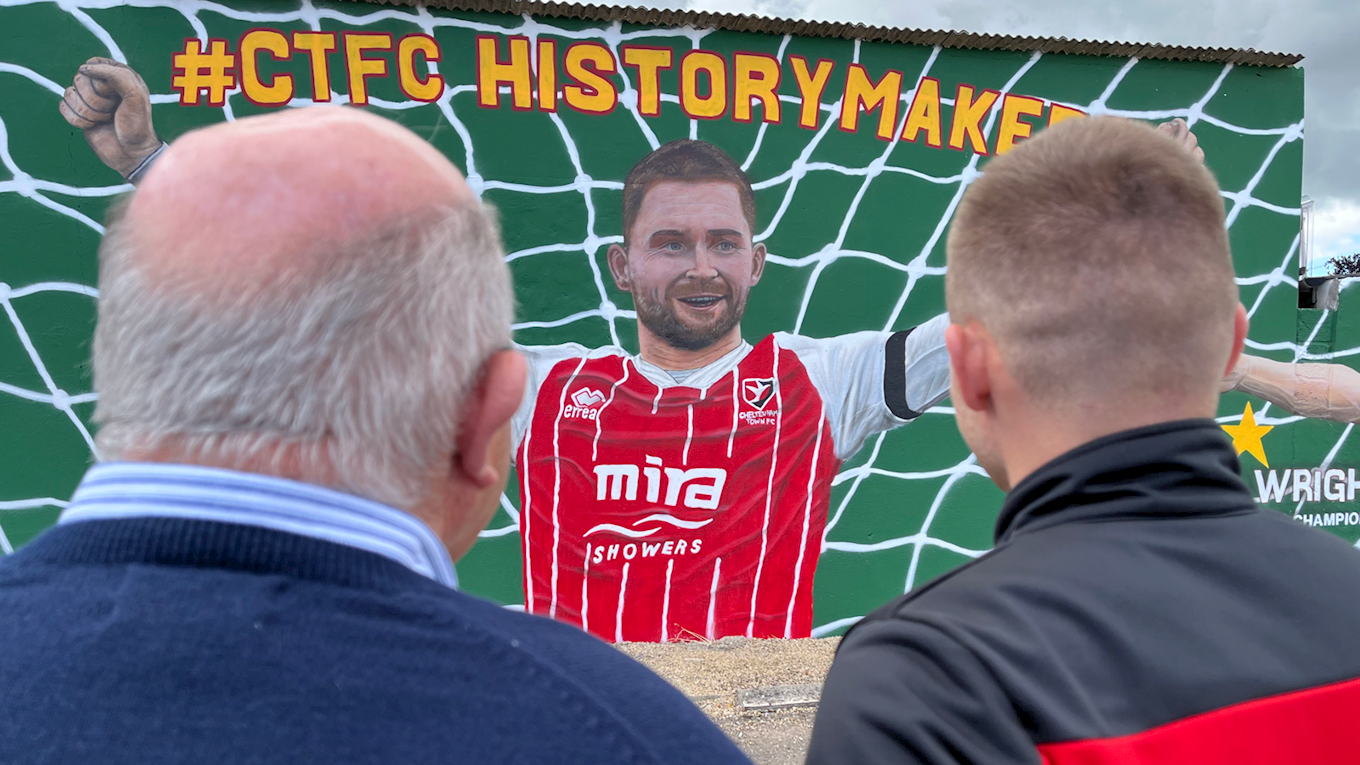 Craig Baker, Managing Director at Mira, was thrilled to support the project and hopes to explore new opportunities in the future.

"The mural was a great opportunity to extend our thanks, and our commitment to the club after 14 years as the clubs’ principal partner,” he said.

"When the chance to support this came along it was something we really wanted to do. It was slightly unusual and brought some attention to the club so it was a lovely thing."

"Mira celebrated its 100th birthday last year with the opening of our new event space, Space 100. As principal partners, offering the space for the club’s new head coach announcement was another great chance to show our support. We’ve been in this neck of the woods since 1937, so we've been a long-term neighbour to the club and part of the community, which has always been important to us, for a long time.

"With the mural we've been able to help the club to celebrate its 40 years of achievement, so there are many parallels. We're a business that employs around 600 associates here in Cheltenham and many are fans, even stewards. So being able to contribute to support this project meant a lot to all of us at Mira.

The names of all of our season ticket holders will be added to the wall on a special plaque to mark the record breaking campaign.

We will also be hosting the Cheltenham Paint Festival at the end of the month to work on a new wall, installed alongside the Cakebridge Place site.