It's another mid-table clash for Cheltenham Town on Saturday when Charlton Athletic are the visitors (kick-off: 3pm).

Last week's home meeting with Burton Albion ended all square, and this Saturday the Robins will be aiming to move further in front of Charlton who will be making their first ever League visit to the Jonny-Rocks Stadium after one previous trip in the League Cup.

This weekend's encounter is sure to be another challenging outing against a team littered with quality in all areas.

A large crowd will be in attendance so fans are advised to leave plenty of time to collect or purchase tickets on matchday. Tickets are available to buy online. Purchase before midnight on Friday to save £2 on tickets.

In the 14th minute of the match there will be a round of applause inside the stadium to remember Richard Allsopp, the former Robins Trust board member who sadly passed away in the summer of 2020. A dedicated and popular member of the Trust and Robins fans, Richard suffered from Noonan Syndrome, a rare condition that affects one in 2,500 new-born babies. There will also be a bucket collection for the Noonan Syndrome Association at the match.

There could be an opportunity for some of the club's January arrivals to be involved. Ben Williams, Reece Hutchinson, Aaron Ramsey and Charlie Brown (pictured) could make their debuts. Southampton loanee Dan Nlundulu meanwhile could make his second appearance after starting last Saturday's draw with Burton Albion.

George Lloyd has returned to the club but won't be involved due to injury. Dylan Barkers loan move to Leamington also rules him out. 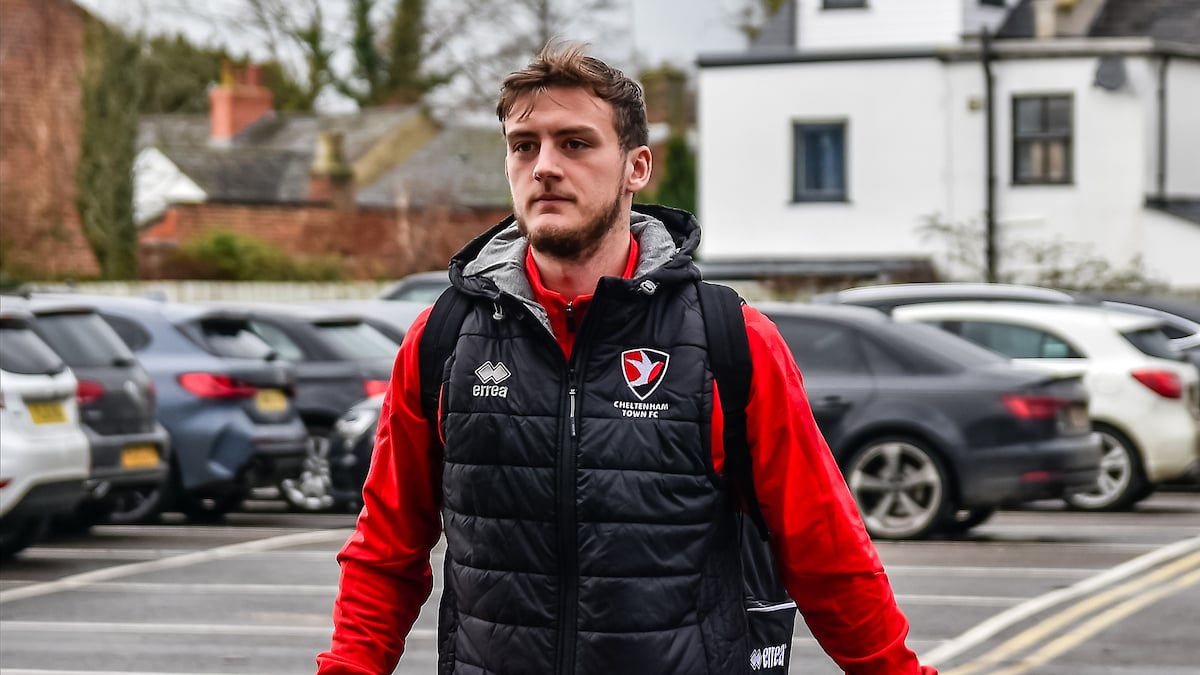 Michael Duff knows all too well the quality that Charlton possess in their ranks ahead of their visit on Saturday.

"Charlton against Cheltenham it's a big team against a little team so we'll have to be at it.

"They are a good team. They've got international footballers, people like Ben Watson on the bench who has won an FA Cup and the career that he's had. They've got quality throughout the squad."

New addition Ben Williams has also been speaking to the press ahead of a game where he could make his debut for the club.

Having lost their last three League One matches, Charlton find themselves 14 points off the play-off places and a league position behind Cheltenham going into this weekend's game.

Their latest outing was on Wednesday night when they travelled to Crewe Alexandra but suffered a 2-1 defeat.

Although not currently pushing towards the top end of the table they boast a squad with significant experience and quality for the level.

Further experience is provided by midfielder Alex Gilbey, while also in the same area of the pitch 36-year-old Ben Watson, who scored the winning goal for Wigan Athletic in the 2013 FA Cup final, offers the quality that saw him play most of his career in the top flight.

At the back Akin Famewo is on loan from Norwich City and significant experience is provided in the shape of Jason Pearce, who at 34, can boast a career spent playing for the likes of AFC Bournemoth, Portsmouth, Leeds United and Wigan.

The Camden born midfielder started his career at Tottenham Hotspur and following a series of loans at Swindon Town, Colchester United, Coventry City, Watford and Derby County he went onto feature permanently for Colchester again, as well as at Notts County.

He is assisted by another former Charlton player in the shape of Jason Euell. 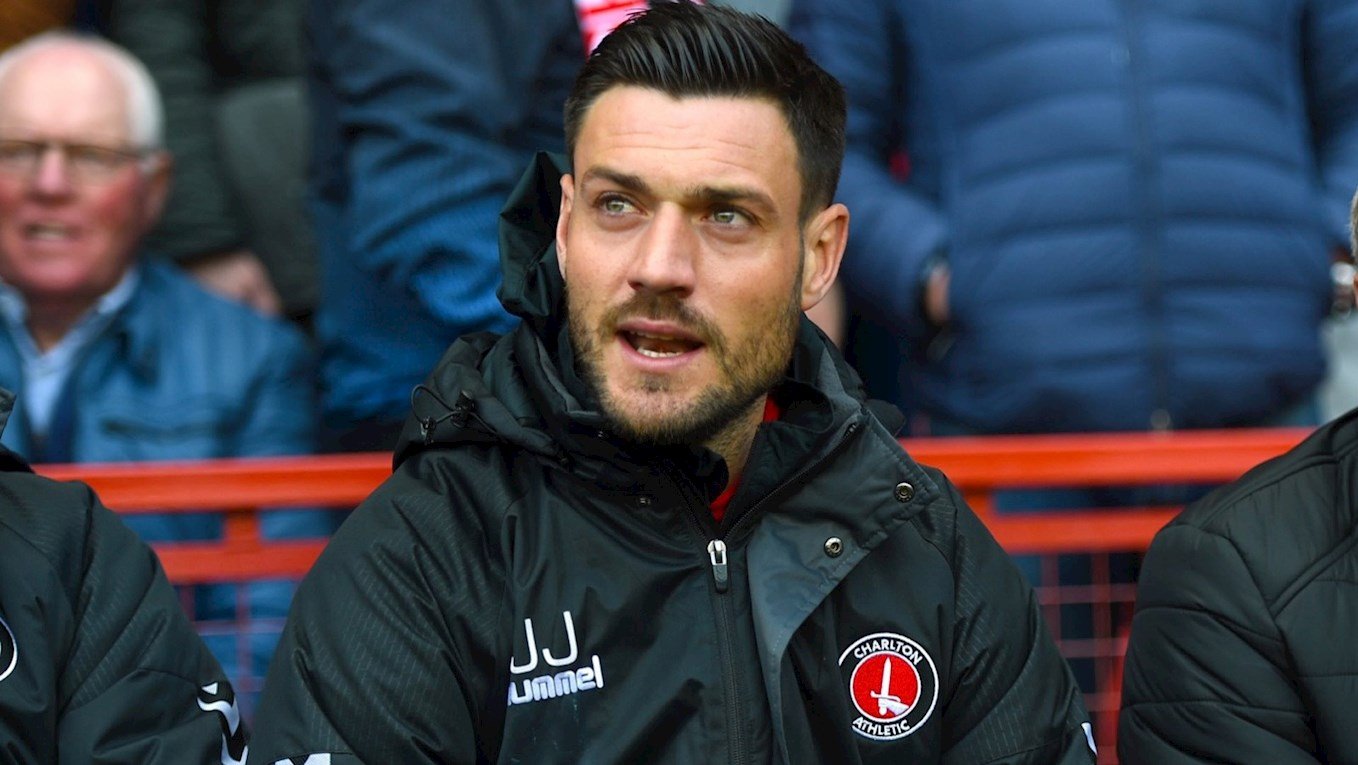 You can purchase tickets for the game online up to midday on Saturday. If you buy before midnight on Friday you can save £2 on each ticket.

Tickets are available to buy on the day though it's strongly recommended leaving plenty of time to do this before kick-off. Standing tickets can be bought from the matchday sales point in the car park, for the Autovillage Stand from the ticket office and for the Colin Farmer Stand next to the Parklands turnstiles.

Pre-paid tickets are available to collect for the Autovillage Stand, Paddock, Tunnel and Optimising IT Stand from the matchday sales and collection point in the car park. Colin Farmer Stand tickets can be collected next to the Parklands turnstiles.

The big interview in Saturday's match programme is with Alfie May as he reflects on the role he's had in the team this season and his progress from proving himself in non-league to making it in the Football League.

The programme is on sale around the stadium at a price of £3 and can also be bought online. 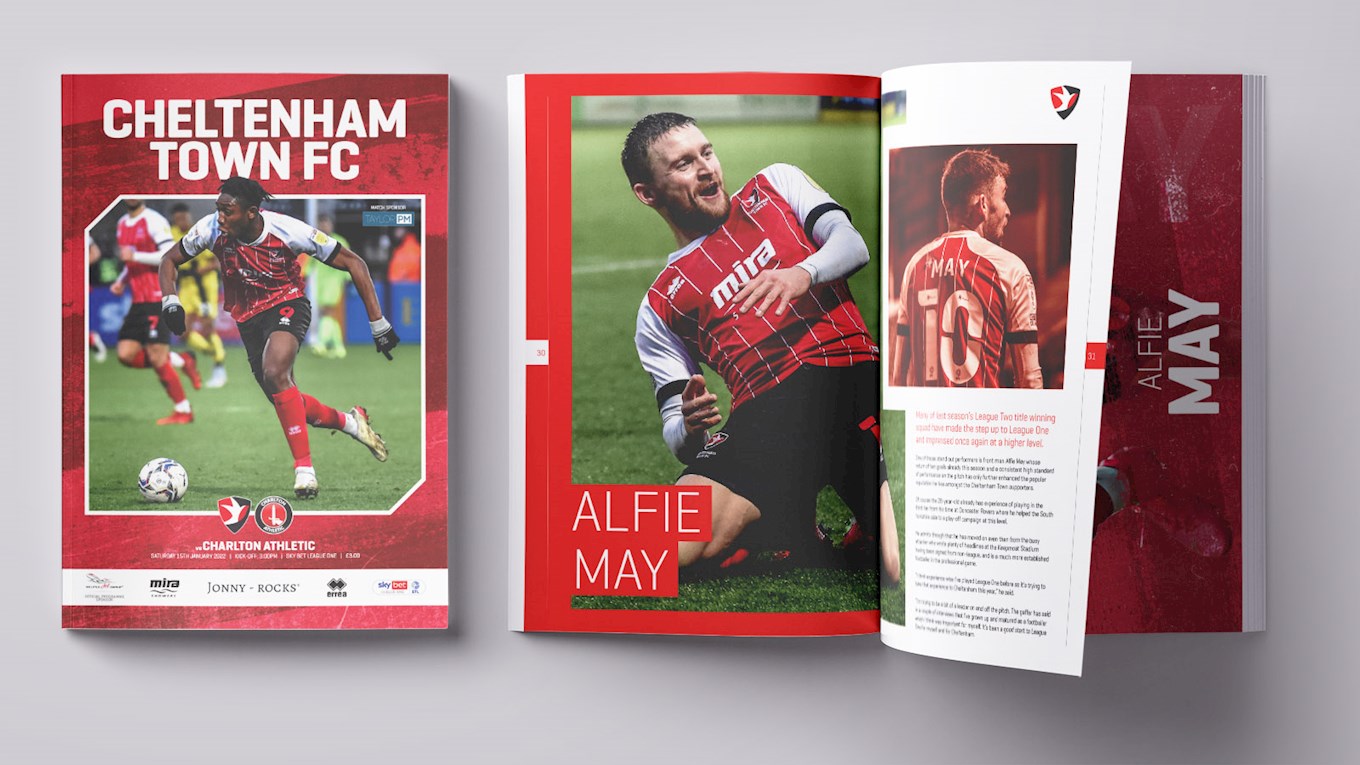 Website: Post-game visit the club website to read a match report and to see reaction from the management and squad to the match.

Highlights: Extended highlights will be available to watch on iFollow, plus look back on the action on the club's YouTube channel and on TV on Sky Sports and Quest. 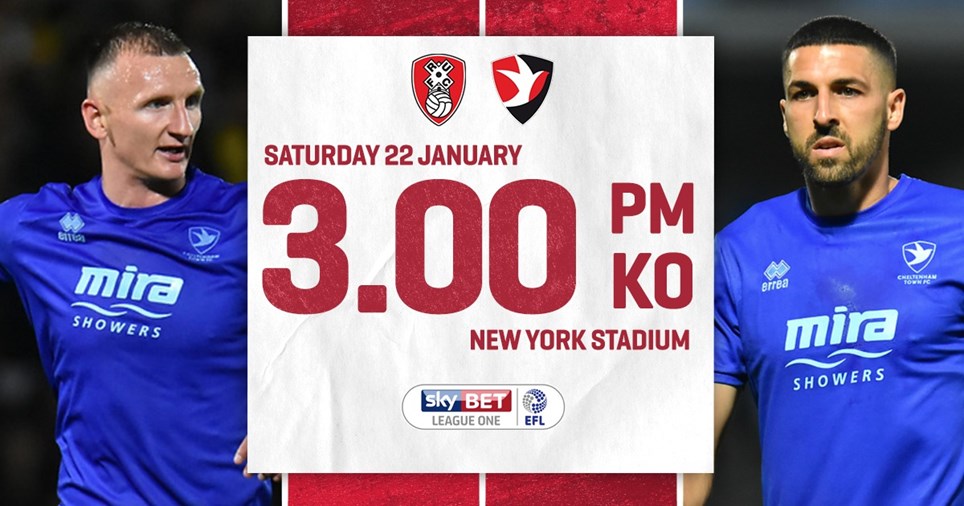 
It's another exciting challenge for Cheltenham Town on Saturday with an away trip to one of League One's leading sides in Rotherham United (kick-off: 3pm). 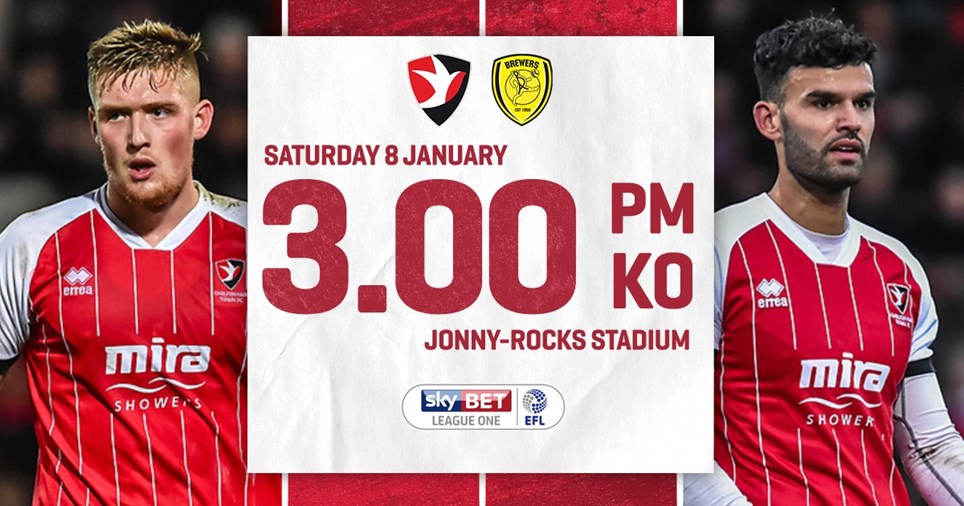 
The Jonny-Rocks Stadium plays host to Cheltenham Town for the first time in 2022 when Burton Albion visit on Saturday (kick-off: 3pm). 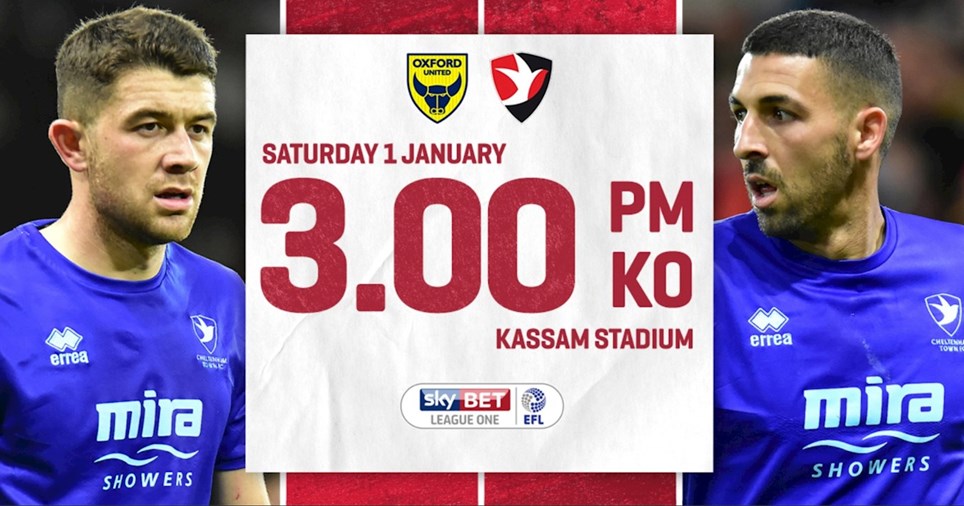 
The New Year begins with a short but tricky visit to Oxford United's Kassam Stadium on Saturday (kick-off: 3pm). 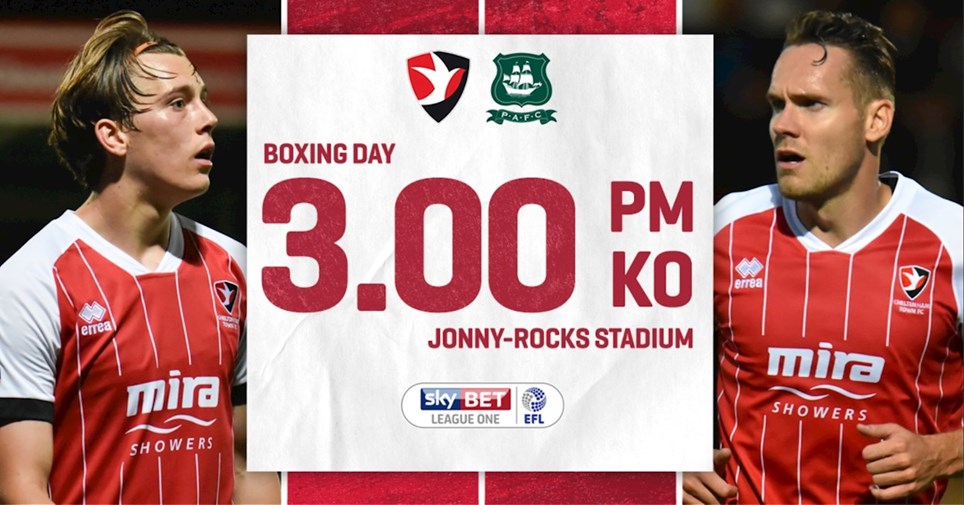