Kitmas is back, ensuring thousands of kids receive the gift of a football shirt on Christmas Day.

This year it’s more important than ever with families struggling to afford gifts due to rising energy bills and the cost-of-living crisis.

Once again, the club will be taking part in the initiative, working with Caring for Community and People’s (CCP) Hamper Scamper campaign to donate Cheltenham Town shirts to children in the local area.

This year, we want to double that number if we can, but we have just 12 days to hit our target as the CCP will begin distributing their parcels to local schools on December 13, the final week of term.

We're urging supporters and our partners to help us hit our target, if they're able to, through our Crowdfunder page.

Each supporter who donates at least one child's shirt (£25) to our Kitmas campaign will be entered into a prize draw to win a Cheltenham Town shirt, signed by the first team squad.

We're also urging local businesses to work alongside the club and our supporters by pledging four or more shirts (£100) to Kitmas. We'll enter each one into a prize draw to win four hospitality packages for a League One match in 2023.

"We are delighted to be supporting the Kitmas campaign again this year and have no doubt that our loyal supporters and commercial partners will come together to collectively have a positive impact in our local community this Christmas," said Richard Morris, Head of Commercial. 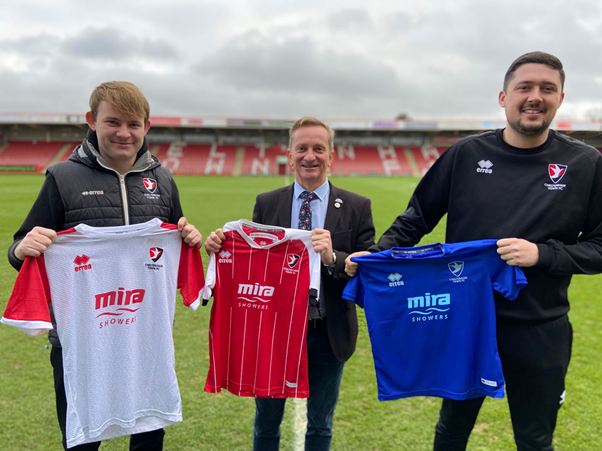 Kitmas was founded by football coach and activist Paul Watson and his wife Lizzie, with support from stand-up comedians Vix Leyton and Mark Watson. Their goal is to run this appeal every year and eventually to become a registered charity. Since they started in 2020, they have distributed over 3,000 shirts to young football fans with the help of Cheltenham Town, Bristol City, Forest Green Rovers, Exeter City and Frome Town.

Gary Lineker is a fan of Kitmas and tweeted his followers and last weekend TV host and comedian James Corden pledged £2,000 to the campaign, making national headlines. The gesture was covered in the national media. Comedian, Mark Watson – one of the founders – spoke to Sky News about the initiative (you can watch it below).

CCP is a registered charity (No.1043143) that exists to transform the lives of children, young people, families and vulnerable adults by preventing homelessness, strengthening families and promoting independence. With a head office in Cheltenham, they currently employ 220 staff, backed up by a team of 160 volunteers, currently delivering services and projects in Gloucestershire.

CCP's annual Hamper Scamper campaign seeks to relieve some of the financial and emotional burdens of the festive season on families and individuals who are already struggling. They believe that nobody should go without. Their aim is to encourage our community to come together to provide hope to those in need.

This year CCP will be distributing their parcels to local schools between December 13 and December 16.