Ellis Chapman is enjoying not just life back as a League One footballer, but the opportunities he's had so far as part of Cheltenham Town's first campaign at this level since the 2008/09 season.

Still aged only 20, he's featured 15 times already this season for the Robins in all competitions, and is now up to 85 senior career appearances overall after being handed his first team debut at a young age when at Lincoln City under former boss Danny Cowley.

Having already won promotion to League One twice in his career, the midfielder has been reflecting on his personal start to the campaign, the team's opening few months and a period in his youth career where he swapped Lincoln for Leicester while still at school.

You personally have started a lot of games so far?

I was saying to someone the other day that I've never really had a run of games and I've now got that. I'm enjoying it and I'm enjoying my football. That's all I want to do - any young player just wants to play football and have fun. I'm thankful to be given the opportunity whenever the games have come.

You've had to play in different types of midfield set-ups this season. How have you found adapting to those different parts of the system?

I think we've dealt with it pretty well. Sometimes you plan a way to set up and sometimes in games things happen and you might have to change it or you might start a game with a different formation. We've got really good players, good young players, and being a midfielder I think we've done well and hopefully we can keep doing that.

You are urged to get on the ball as a midfielder and to get the ball off our central defenders. Is that difficult to do against a higher level opposition and in front of big atmospheres too?

When you are playing against the top sides if we know it's going to be a challenge we need to make the games as tight and competitive as possible?

That's the difference I feel on the perspective of the contrast in leagues from League Two to League One - there's a lot more better teams and better players. You've got to be on it literally every single game. If you're not on it then these better teams and better players will punish you. That's what happened at Sunderland. We know every game is tough but we have to show a reaction.

Is it a big plus to be at the same level as Lincoln City? The same level you left them at to come to Cheltenham?

It's really good. I knew from the very start when I first joined Cheltenham we wanted to go places and we wanted to get promoted. Now that we've done that I'm really happy. League One football is a really good standard and hopefully we can kick on and keep doing what we're doing.

Earlier in your career you went to Leicester City. How did that come about?

I was at Lincoln since the age of nine till 13 or 14. I was doing really well and playing with higher ages. When I was 13 or 14 I played for the under-18s at Lincoln quite a few times. Leicester came about and I went there and they signed me from Lincoln as an under-14. I was an under-14 to under-16 at Leicester and then for personal reasons it just didn't work out and I wanted to come back. The time I had at Leicester was really good and it helped me develop as a player. It was a big step from Lincoln to Leicester when I first went but I really enjoyed it.

So you travelled down to join Leicester?

I was travelling down. I was still at school in Lincoln. I got my day release so I'd go to school in Lincoln on a Monday morning and get picked up at 12pm. I'd go and train, do my school work there that I'd been given, stay over in digs that night and then train on the Tuesday. I'd train again Thursday evening and then you've got your game on the Saturday. It wasn't 'you've got to train everyday' because I was still a young lad. It was quite hard as I was having to stay on top of my school work as well as travel and playing.

Did you enjoy that or was there a pressure with it?

I loved it. It's always been my dream to play football. I enjoyed it, it was something different for me. Being honest I didn't really enjoy school so I was happy to get out as much as I could! When I went there I still had to do my work, it wasn't like I was missing anything from school. I had to do my stuff one-on-one with a teacher they used to bring in.

If you include your senior football as well you've already had a lot of football experiences?

I think it's funny because even I sometimes forget my age. I'm still young, I'm 20, and I'm still learning a lot but I've managed to wrack up quite a few appearances so far. I think people forget my age and it's constantly a learning curve and hopefully I'm going to continue learning the older I get.

You can watch Chapman next in action on Saturday when Cheltenham host Accrington Stanley at the Jonny-Rocks Stadium with a 3pm kick-off.

It's Kids for a Quid for the next three home fixtures against Accrington, Morecambe and Chelsea under-21s when you buy before matchday. Buy tickets online or from the ticket office. 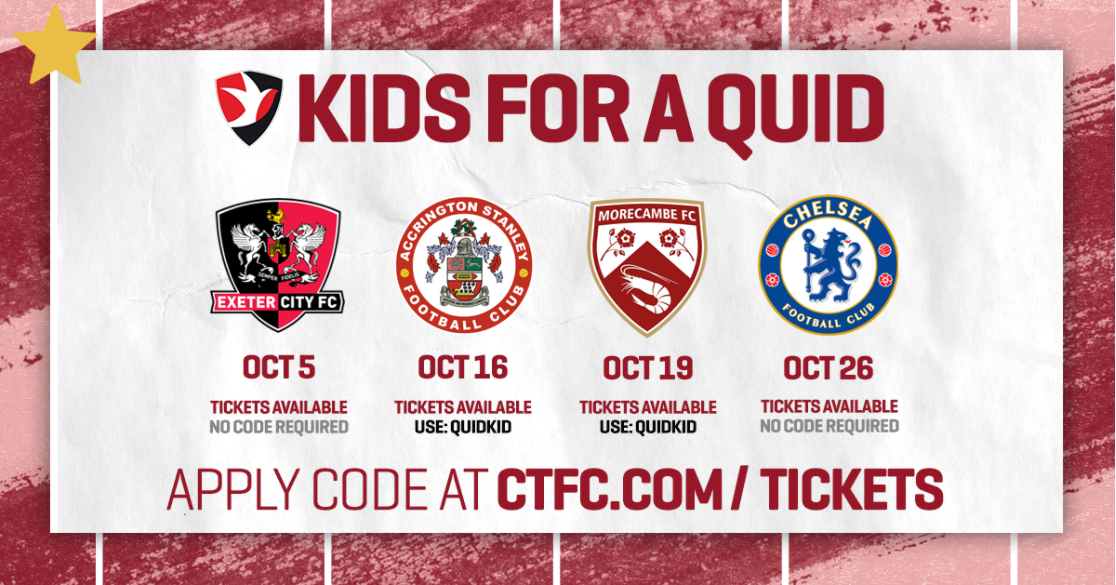