Goals from Brennan Denness-Barrett, Felix Miles and Connor Jakeways saw Cheltenham through to the third round of the FA Youth Cup in a goal-filled encounter at Evesham United resulted in a 4-2 win.

It was a fairly even start which saw Cheltenham only just enjoy the higher possession of the ball going forward, the away side came closest to the goal, albeit far less often, with Harvey Hughes crossing in on two occasions. Ben Hoy and Will Armitage were on hand to deal with both easily.

The majority of the away side’s advances came through Hughes on the left who was able to break down the wing multiple times in the second half.

Portsmouth grew into the game well, taking their share of the ball back after the ten minute mark and keeping Cheltenham at bay whilst getting forward well, but the home side were able to weather the storm for the first twenty minutes. 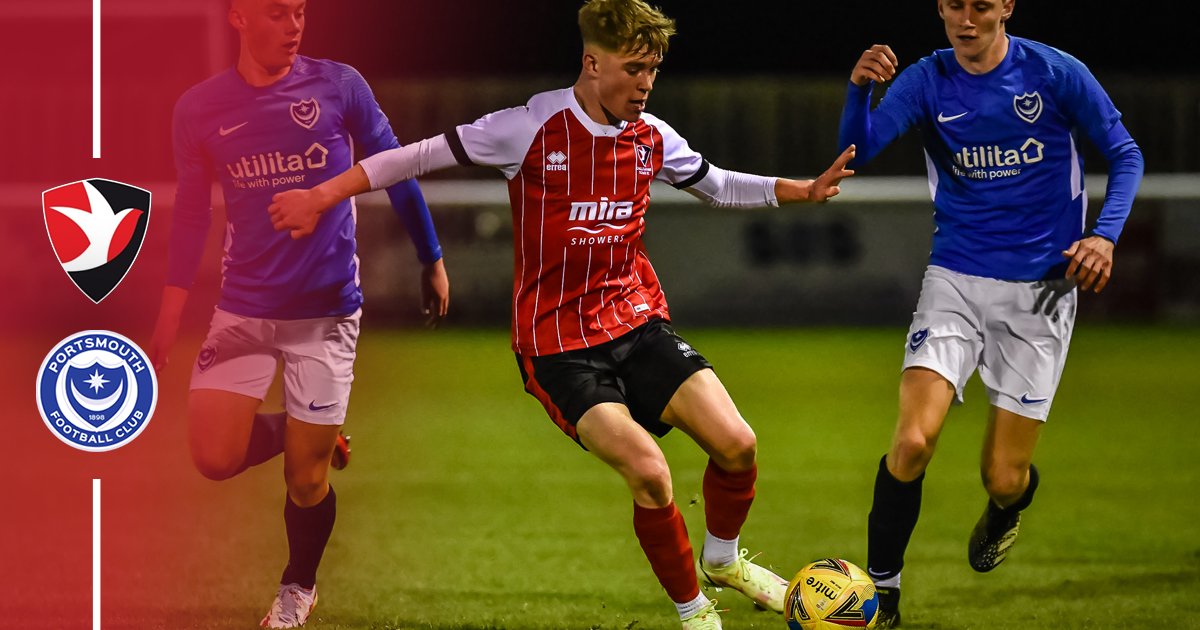 The first shot of the might went to Connor Jakeways who spotted the ‘keeper off his line but saw his effort on the half volley blocked by a Portsmouth defender less than a yard from him. Cheltenham saw their chances limited at the midpoint of the first half with the early pressure starting to wear off.

The visitors had a penalty shout on 28 minutes when Adulai Sambu’s attempted clearance was blocked and the ball fell to Elliot Simpson on the edge of the box. He ran through and shot wide but a slide tackle from the defender prompted the assistant to flag for a foul inside the area, the referee disagreed and Hoy restarted play from a goal kick.

Cheltenham took the lead just three minutes later when a one-on-one for Brennan Denness Barrett opened the scoring after he saw his initial effort saved well by Toby Steward, but was there to slot home the rebound to make it 1-0. Another good chance came soon after when Felix Miles went through down the left but saw his floated cut back gathered by Steward.

The second half saw a heated start with a poor tackle causing an aggressive reaction among the away side and numerous players coming together in the middle of the pitch. Joe Hunt picked up a booking for his part in the incident. 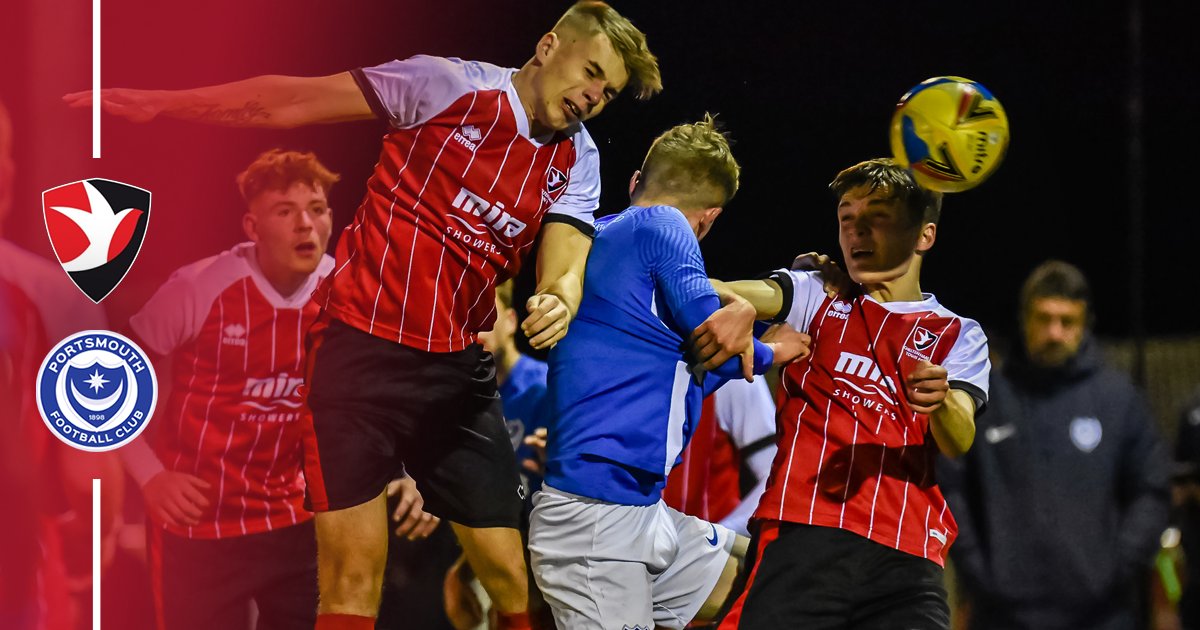 Denness-Barrett doubled the lead on the 49 minute mark, dispossessing the Portsmouth defender to go through one-on-one again, this time opting to fire past the 'keeper and finding the net at the first attempt.

Portsmouth's first effort of the second half came from Hughes who picked up the ball 25 yards out and looked to bend one in the top right corner. The long range shot didn’t bother Hoy in the Cheltenham net who saw it float high and wide of the goal.

It looked to be three on 56 minutes as Miles slotted home after pin-ball in the box and Portsmouth's failure to clear, but the linesman raised his flag and the goal was ruled out.

Denness-Barrett had two good chances for his hat-trick in the 61st and 63rd minutes. The first saw his shot from a squared ball stopped excellently by Steward who dived across the face of goal. The next saw him through on goal but more brave ‘keeping by Steward saw the shot-stopper clear the ball on the edge of the box.

The away side pulled one back on 67 minutes. A contentious corner was taken by Alfie Bridgman and slotted home by Dan Gifford.

Denness-Barrett came up against Steward once more just a few minutes later as their individual battle continued. This time the 'keeper came out on top to beat the striker to the ball.

Just under ten minutes later and it was all even, a long ball into the box saw Gifford compete with Hoy with Hoy appearing to grab the head of Gifford rather than the ball. A penalty was given and Gifford slotted the ball into the left corner.

Portsmouth had a great chance to win it with seven minutes to go when Cheltenham didn’t deal with a long ball and Maxwell Hunt won possession and went through against Hoy.

There was no way past the shot-stopper who dived bravely at the attackers feet. Another goal was ruled out with three minutes to go after Steward gathered Hunt’s free kick under little pressure and but was illagely dispossessed by Charlie Dashfield who picked up a yellow card for his efforts.

The 90 minutes ended all square and we headed to extra time in Evesham. 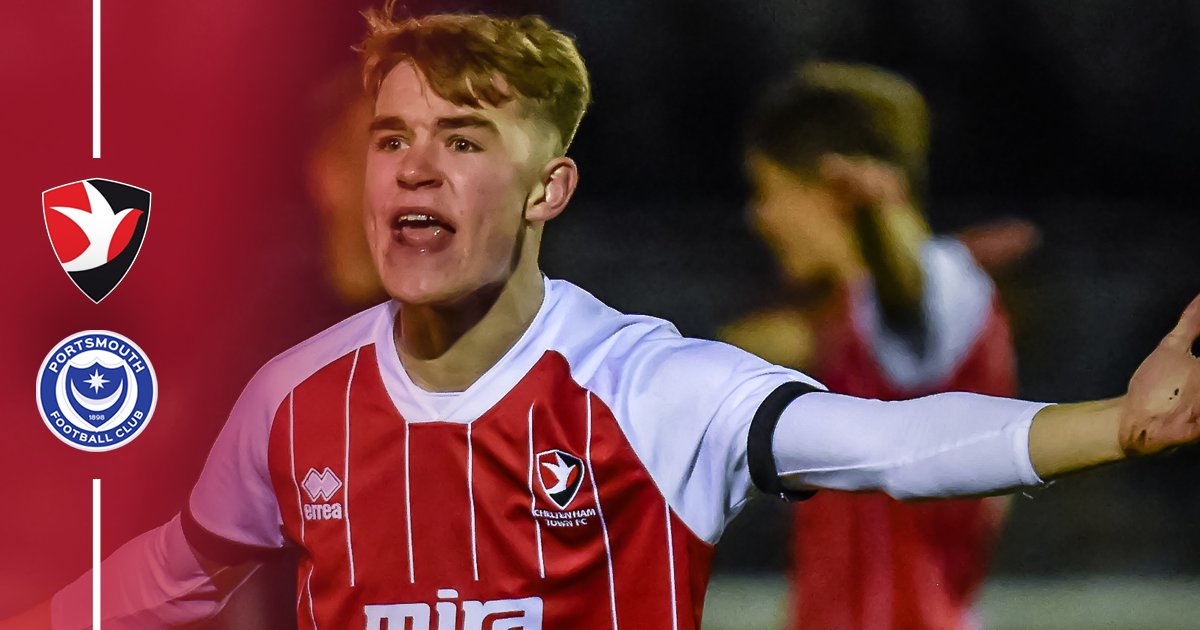 Three minutes in brought the first big chance when Dashfield went through in goal but more brave keeping from Steward saw him lose the ball and be denied Cheltenham’s third of the night in an ever-growing tense affair.

The 97th minute brought a moment of FA Youth Cup magic when Portsmouth cleared a corner and the ball fell to Connor Jakeways, who found the bottom right corner from 25 yards, volleying home Cheltenham's third to put the Robins back in the lead. Just a minute later Miles headed over the defender and around the goalkeeper to give himself space to slot home into an empty net and restore the home side’s two goal advantage.

It was 4-3 in the 105th minute as Gifford slotted home once again to convert Hughes’ free kick amid home calls for offside, the officials disagreed and the away side made it interesting once more.

The game started to get feisty in the second half of extra time with frustration and fatigue starting to show. Another coming together was quashed quickly by the officials as Cheltenham looked to defend their one goal lead with ten minutes to go.

Miles almost made it five when his free kick deflected off the wall and looped over the bar after Dashfield was taken out on the edge of the box by Harry Jewitt-White.

Portsmouth piled on the pressure towards the end with Harvey Laidlaw having a long-range effort deflected wide by Armitage. Two corners later and Tom Spencer cleared to give the defence some relief.

In the end, after 120 minutes, Haynes’ side did enough and the club booked their passage into the third round and book a meeting with former Robin Liam O’Neill's youngsters at Rugby Town.