A Southend United side who have taken points from four of their last five League Two games are the visitors to the Jonny-Rocks Stadium on Tuesday (kick-off: 7pm).

Struggling at the foot of the table for much of the season, Southend are showing really positive signs as they look to haul themselves away from relegation trouble.

In February alone they earned wins on their travels at Forest Green and Newport County AFC, while they also held top of the table Cambridge United and Salford City to goalless draws.

The game is all set to be a much tougher contest than the one Cheltenham encountered back in October, but after back-to-back away victories Michael Duff's charges will go into the game full of confidence.

Watch all of the action by purchasing a match pass on iFollow.

Having come through training there's a possibility midfielder Liam Sercombe could be back involved in the squad.

Missing though will be Alex Addai, Will Boyle, Ellis Chapman and Chris Clements - they are all carrying injuries.

Dropping down into League Two for the first time since 2015, Southend have again plummeted to the lower reaches of their league campaign, but the Shrimpers fans will be encouraged by the positive progress they're gradually making.

They endured a miserable start to the season and had to wait until mid-November for their first win. Since then though they've managed to drag themselves out of the bottom two and in February alone they showed, with their January additions, that they are more than capable of securing their place in League Two again.

In February they recorded wins over Newport County AFC and Forest Green, with draws also achieved against Cambridge United and Salford City. The only loss they suffered was against momentum building Bolton Wanderers.

Their goalkeeping situation ahead of Tuesday is an interesting one. Mark Oxley is out injured so they brought in Alex Bass on loan from Portsmouth on an emergency seven day loan for Saturday's draw with Salford. However he went off at half time due to an issue with a previous injury, so academy graduate Harry Seaden featured in the second half and he may be forced to start at the Jonny-Rocks.

Their midfield includes Frenchman Timothée Dieng, ex-Crawley Town man Ashley Nathaniel-George and AFC Bournemouth loanee Kyle Taylor who has been on loan from the Championship club since September. Experienced wide man Ricky Holmes joined towards the end of February and brings lots of Football League knowhow.

At the top of the pitch a January loan signing in the shape of Reeco Hackett-Fairchild could feature. Nigerian born Simeon Akinola has been given the opportunity in League Two this season after several goal scoring seasons in the National League.

Having led Weymouth to consecutive promotions from the Southern Premier to the National League, Mark Moseley made the jump into the Football League by being appointed as the Southend manager last summer.

The 39-year-old is steadily improving his team after a difficult start having agreed a three-year contract when he became boss.

As well as his success with Weymouth, he also managed the AFC Bournemouth under-21s side alongside this having spent a part of his playing career on the south coast.

A midfielder in his playing days, he also represented Aldershot Town, Exeter City, Grays Athletic, Stevenage, Hayes and Cambridge City, as well as a loan stint at Plymouth Argyle. 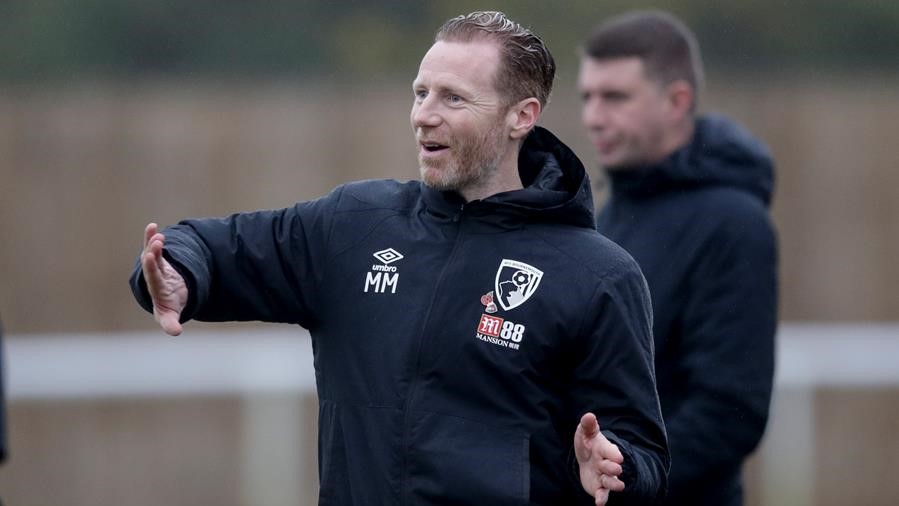 One to watch: Nathan Ferguson

The 25-year-old midfielder made the switch to Roots Hall in January and already he has found the back of the net twice for his new employers.

He joined on an 18-month deal from fellow League Two side Crawley Town.

Earlier on in his career he's featured in the Football League at Burton Albion and Port Vale, but has mostly experienced life in non-league circles with spells at Dulwich Hamlet, Grays Athletic and Billericay Town adding to his experience. 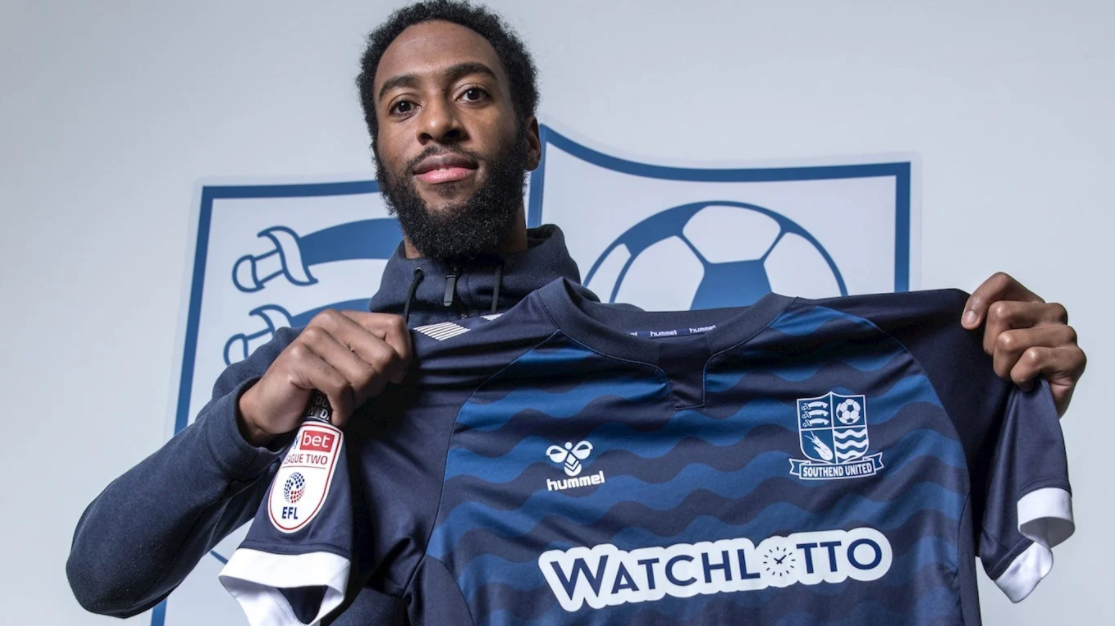 As always there's a print and digital copy of the match programme on sale on the club's online shop.

The 24 page print copy is priced at £2.50 and you can down download the digital version for £2.

Inside the programme there's a big interview with captain Ben Tozer plus other interviews with young pair George Lloyd and Callum Wright.

You can also read the latest thoughts from Michael Duff, find out about the night's opposition and check out the latest from around the club.

Get your print version online or download a digital copy from the shop. 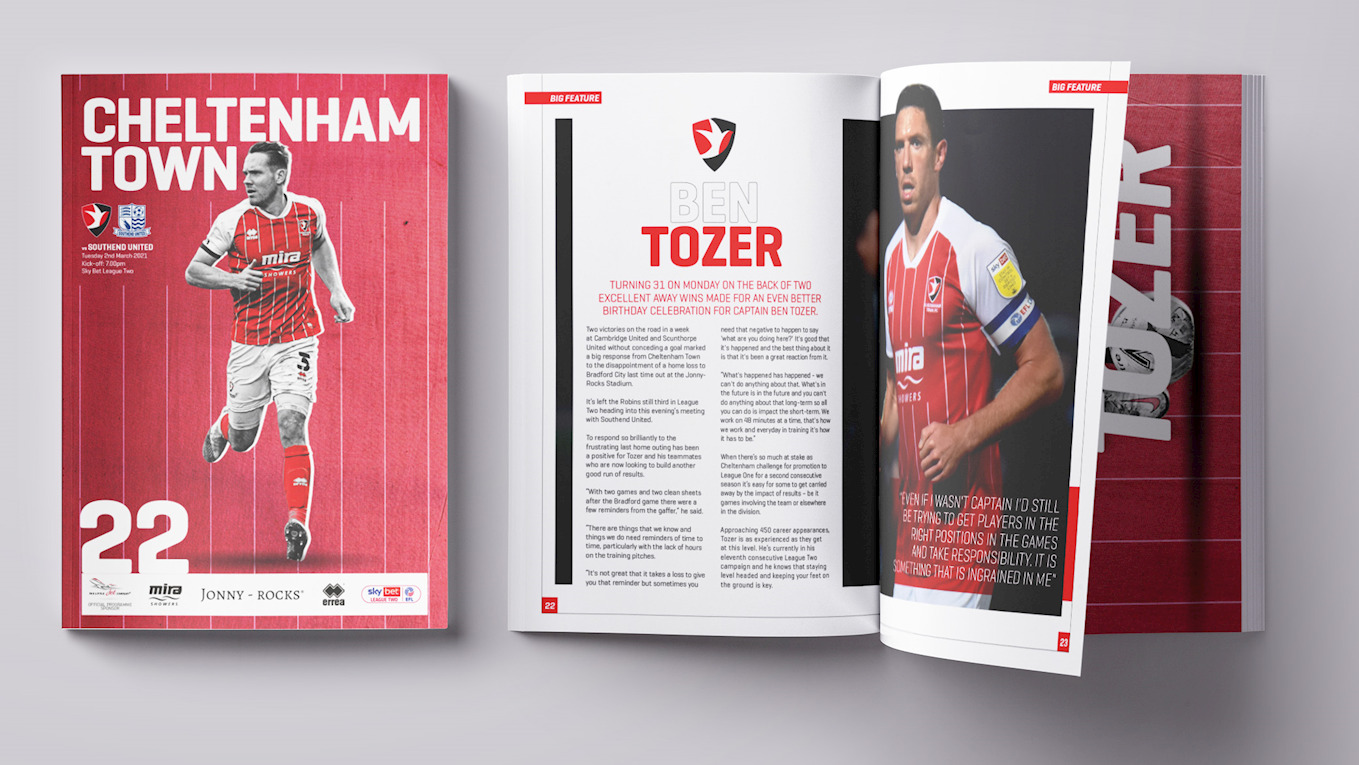 The whole match is available to watch live on iFollow with live commentary from BBC Radio Gloucestershire.

To watch the game, buy a match pass online before kick-off and subscribe to the full match coverage at a cost of £10. 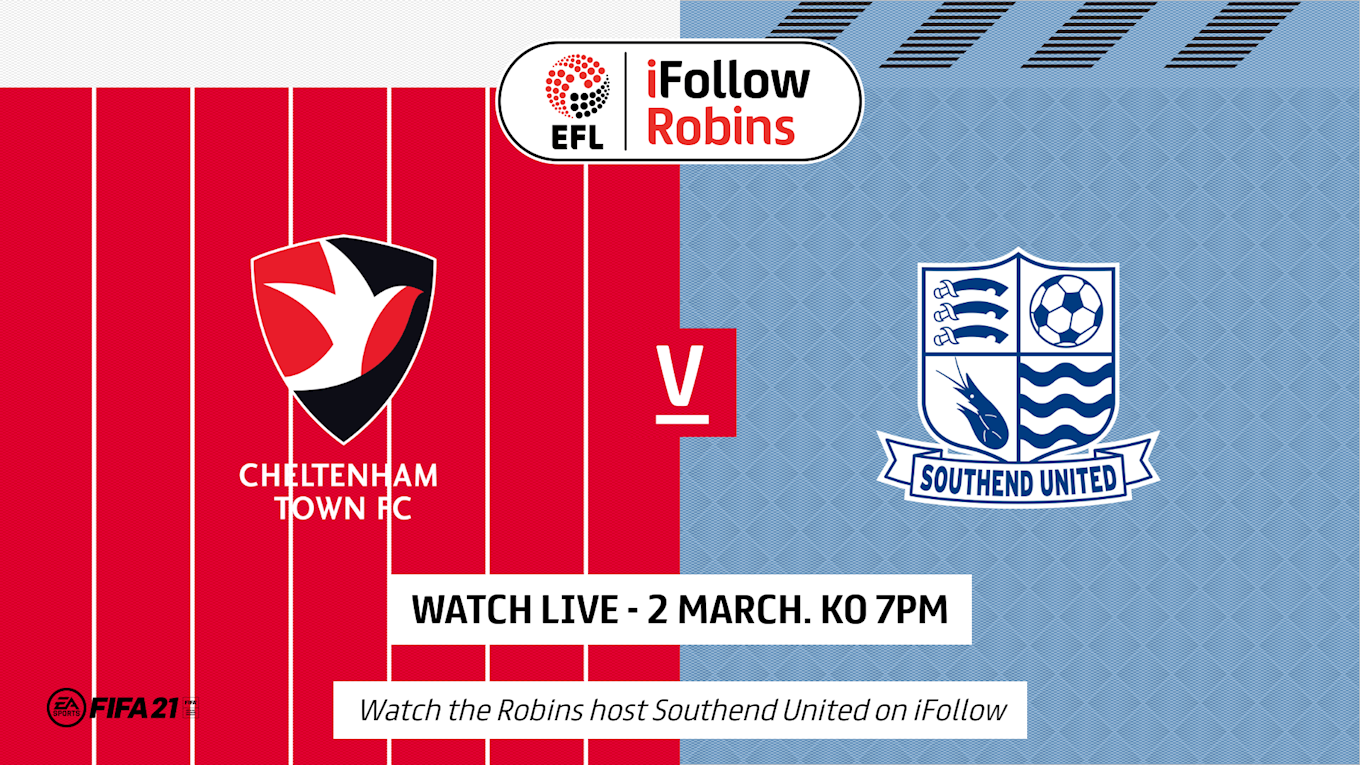 After the match read John Townley's match report on the club website, and see reaction from the post-match press conference with Michael Duff.

You'll be able to watch extended highlights on iFollow post-match too.