Josh Griffiths will be aiming to cap a week where he was called up to the England under-21s squad for their forthcoming UEFA Under-21 Championship matches with a positive result against Salford City on Saturday.

It's been a week of highs and lows for the 19-year-old. He was capped up to the Three Lions squad on Monday and then on Tuesday was a part of a Cheltenham side who were left frustrated after a 2-0 home defeat against Barrow.

He's not the first Robins loanee goalkeeper to earn an international call up in his time in Gloucestershire, with the youngster from West Bromwich Albion well aware of those who have done well while on loan at the Jonny-Rocks Stadium in the past.

"I know the story of Jack Butland," Griffiths said. "Booky (Steve Book) spoke to me about him and every now and again he comes up. If I could have the career that he's had then I'd be very happy. The likes of Dillon Phillips and other goalkeepers who have been at Cheltenham I know a lot about.

"It's about focusing on the present and playing well and wherever it takes me I'll go."

He is hoping like Butland and Phillips that his experiences at Cheltenham will go onto help him operate regularly at a higher level in the future.

"There have been loads of ups and downs this season - some bigger than others." he added. "But the experiences I'm getting now at 19 are great. I'm trying to impact the team as best I can. One week you're going to play well and one week you are going to make a mistake, that's just how goalkeeping can be. It's just trying to be as consistent as I can and I'm pretty happy with how it has gone this season."

So far this season his time in a Robins shirt has been very successful. Out of 40 games he's played in all competitions he's kept 18 clean sheets - almost achieving a clean sheet every other game.

"All goalkeepers want clean sheets. A lot of the games the back three or back five have been brilliant. They've kept it quiet but then there have been maybe four or five where I've had to make a save to earn them and that feels great. The gaffer always jokes with me about how many he wants at the end of the season but I'll keep that quiet for now."

As well as his personal progress he is also determined to earn some early honours in his career, though he knows any potential promotion dreams that could be achieved this season are still a long way off.

"To get that on your CV is great, but as cliche as it sounds you just have to take each half of football, each 45 or 48 minutes, and just win each half. Everyone knows what we're working towards and what the goal is. It's working on the process rather than the outcome at the moment." 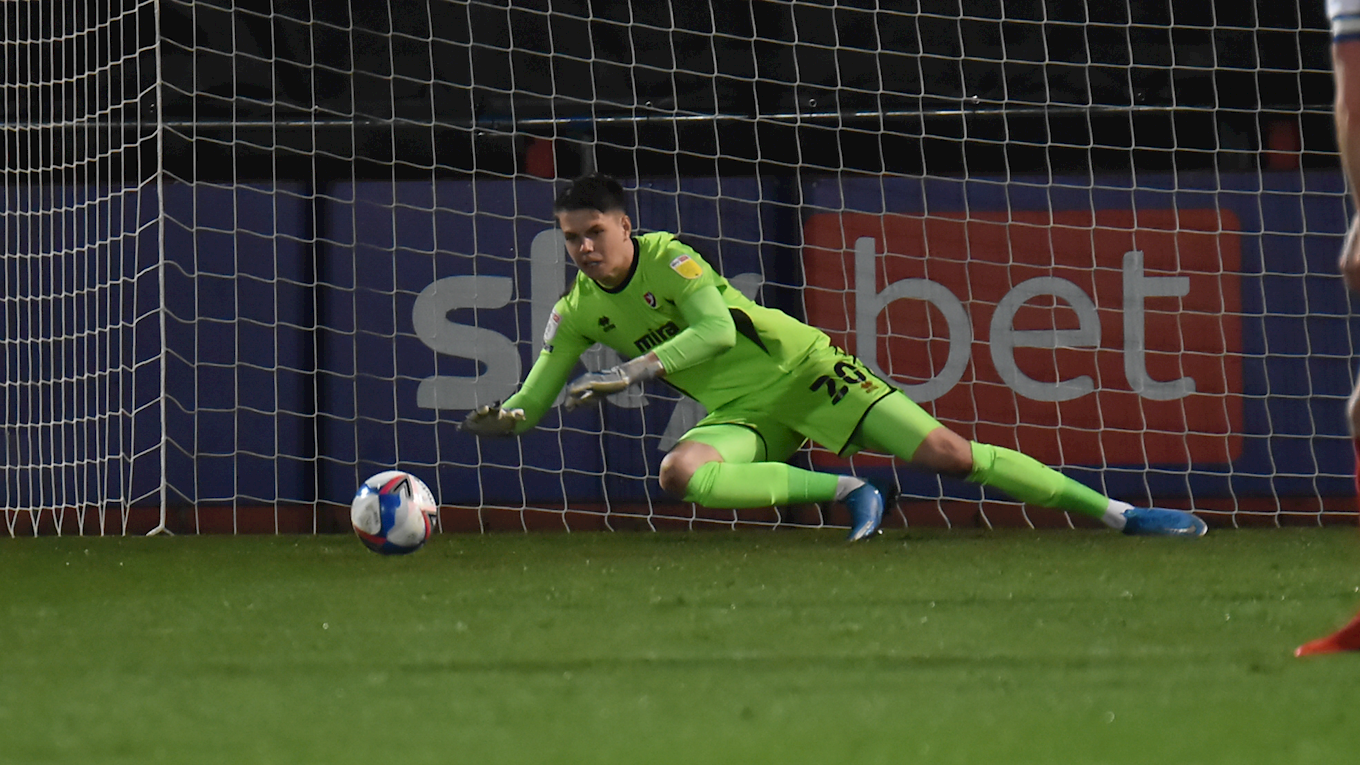 With his call up to the national under-21s squad he'll miss the away match at Morecambe later in March. Scott Flinders will be expected to come back into the side for that game at the Mazuma Stadium and he'll be pleased to know that while he's away there's a very capable man to don the gloves in his absence.

"Scott's been top class," he continued. "He's been brilliant with me on the pitch in terms of speaking to me and I always ask him what he thinks on certain goals or little bits of goalkeeping advice. He's a great guy off the pitch as well, he's good to be around, good to train with and hopefully we both challenge each other.

"He certainly challenges me and Max (Harris) as well and Booky, the whole goalkeeping team is brilliant. We obviously understand that only one can play but we all back each other whoever is going to play. It's a great group to be a part of."

This weekend Salford City visit the Jonny-Rocks Stadium for a 3pm kick-off on Saturday.

Looking to return to winning ways following the disappointment of Tuesday's 2-0 home loss to Barrow, Griffiths is hoping the team can respond positively, the same way they've done as a team and he has as an individual throughout the campaign.

"The team have bounced back really well. The Exeter game is a prime example. We lose at Mansfield on the Tuesday and then everyone is thinking that's a tough game at Exeter, but the team were brilliant. To bounce back is great and for myself as well, you've got to be mature about it.

"You can't be up really high one week and then down low, you've got to keep a happy medium. People look at how you react after mistakes and one thing I've always been taught as a kid is that if you make one focus on not making another one the next game and try and put it right."

Watch Saturday's match live online by buying a match pass on iFollow for £10.

You can read a feature on other Cheltenham players to have represented the club who have played for their country at under-21 level in Saturday's match programme. Buy the print copy from the club's online shop, or get a digital version on Apple, Android or via the MatchDay Digital app.