Everyone at Cheltenham Town Football Club was deeply saddened this week by the passing of the club’s former Head of Youth Development, Brian Forsbrook.

Brian joined the Robins in 2000 to lead the establishment of the club’s first ever Centre of Excellence, which later became the academy.

He brought vast experience to the role and very quickly the club was able to establish a network of teams, coaches, scouts, medical staff and administration support under his guidance.

Brian remained at Cheltenham Town until his retirement in 2009 and is fondly remembered by all those who worked with him. Director and club secretary Paul Godfrey commented:

“Brian was a gentle soul but he had a vast knowledge of football and was not afraid to fight his corner when needed. He had a great sense of humour and would laugh uncontrollably at some of the banter that went on. He was also very proud of his involvement with the club and when we won the play-offs in 2006 with David Bird, one of his youth team graduates in the team, I remember him being quite tearful on the lap of honour round the Millennium Stadium.

“His contribution to the club in laying the foundations for our present day academy was a very considerable one.” 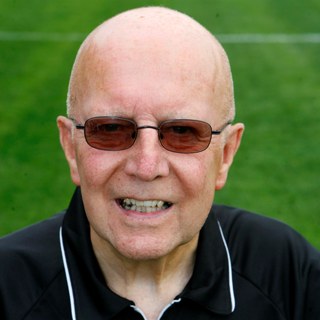 Former Cheltenham Town player Bob Bloomer, who worked with Brian as the club’s Under-18s coach for a number of years and is now a regional youth development officer for the EFL, added:

“I was obviously devastated to hear the sad news of Brian passing away. He was my first mentor on leaving the environment as a player behind and transitioning into a coach at Cheltenham Town.

“His support was constant and invaluable and has helped me get to where I am today. I will be forever grateful and indebted to him.

“I send my heartfelt condolences to his wife Valerie and want her to know how much he meant to me. A very nice man who I will remember with much fondness and will miss very much.