The countdown is on for England's opening game at this summer's Euro 2020 tournament.

We've challenged some of our first team players to select their best England XI from the squad Gareth Southgate has chosen for the competition.

Next up to select his starting XI is Lewis Freestone. The defender has opted for a 4-3-3 formation with a deep lying midfielder.

Take a look at who makes his England Euro 2020 XI and why he thinks they should be in the starting line-up:

Goalkeeper: Jordan Pickford - "I've picked him on past experience and he is great on the ball"

Right back: Kyle Walker - "He has great pace and he'd help Sancho in front of him"

Left back: Luke Shaw - "He's solid at both sides of the game and has the relationship with Harry Maguire"

Centre back: John Stones - "A composed ball player. He had a great season and has a relationship with Walker"

Centre back: Harry Maguire - "He'll lead the back line and is an aerial threat in both boxes"

Central midfielder: Mason Mount - "He has great quality and bits of magic to create stuff for us"

Left forward: Jack Grealish - "Cutting in on his right foot, coming into pockets to get the ball and winning loads of fouls which suits us with Maguire in the team"

Right forward: Jaden Sancho - "He has good pace and is direct. An out and out winger who will provide good crosses for Kane"

Centre forward: Harry Kane - "The best goal scorer who can score all types of goals. He can drop in to get the ball with runners going in behind when he does" 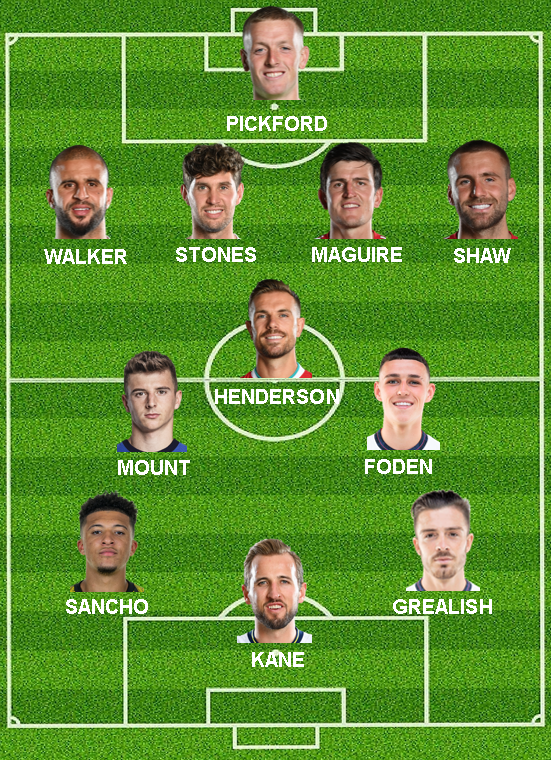