Peter Crouch produced a spectacular Sir Rod Stewart tribute before drawing a dream tie for Cheltenham, who take on Manchester City this Saturday in the Emirates FA Cup.

For the Raglan’s, a family of die hard Manchester United fans, like the famous Stewart song they would have been sailing.

Having been born in Wythenshawe, South Manchester, Charlie Raglan spent his formative years just five miles from Old Trafford. The 90s were a dominant era for the Red Devils, winning four of the first five Premier League seasons and a later famous treble before the turn of the millennium.

Raglan would have watched all that from a distance however, growing up in Tenerife before returning to England to kickstart his football career where I’m sure teammates would have started by asking have you ever seen the rain?

10 years on from his return to England, Raglan now he has the chance to take on Manchester City, with the support of his closest family and friends from afar:

“It’s massive for my family and friends who are predominantly Manchester United fans,” said Raglan, “From a personal point of view, I’d have had a lot of people who would have wanted to come and watch me and the other lads in such a big game. Manchester City are one of the best teams in the world right now. It will be a really good occasion and it’s one I’m certainly looking forward to.

“Growing up, Manchester United were the biggest and best team in the country so it made it a little bit easier to support them. Now I wouldn’t say City have taken over that mantlepiece completely, but they’re definitely back and a strong side.”

At any other time, Raglan would have been surrounded with that close group of family and friends to watch the draw but rest assured his phone was close at hand to hear the reactions to such a huge draw.

“Out of the ones still in the draw, you want a big one and obviously United and City are the two you look out for. We were first drawn out so my phone was going off straight away really. Family, friends, people that were really excited to see it and were hoping it was on telly which we now know it is.”

The real damper of such an occasion is down to the current times, with no fans able to attend a monumental evening at the Jonny-Rocks Stadium.

Having previously faced Burnley and Newcastle in the 4th Round, it’s been 15 years since the latter fixture and the prospect of playing a Premier League side, let alone one of Manchester City’s calibre, would have had fans raring to go.

Robins fans were able to return briefly in December, with an eight goal thriller against Exeter one of the standout moments of the season so far, and the 27-year-old believes their absence will be felt:

“It’s such a shame fans can’t be there. I thought about that the other day, in the games we have had fans this season, which was only a couple, we’ve probably had one of our best performances of the season which was Exeter at home.

“We didn’t start well but the fans gave us a lift, we reacted and we carried on going. We knew the fans were there, we kicked on and scored five goals at home against a good side. The fans definitely played their part that day. It’s a shame but it’s what comes with the times at the minute - hopefully we will come back again next year and get United or Liverpool!” 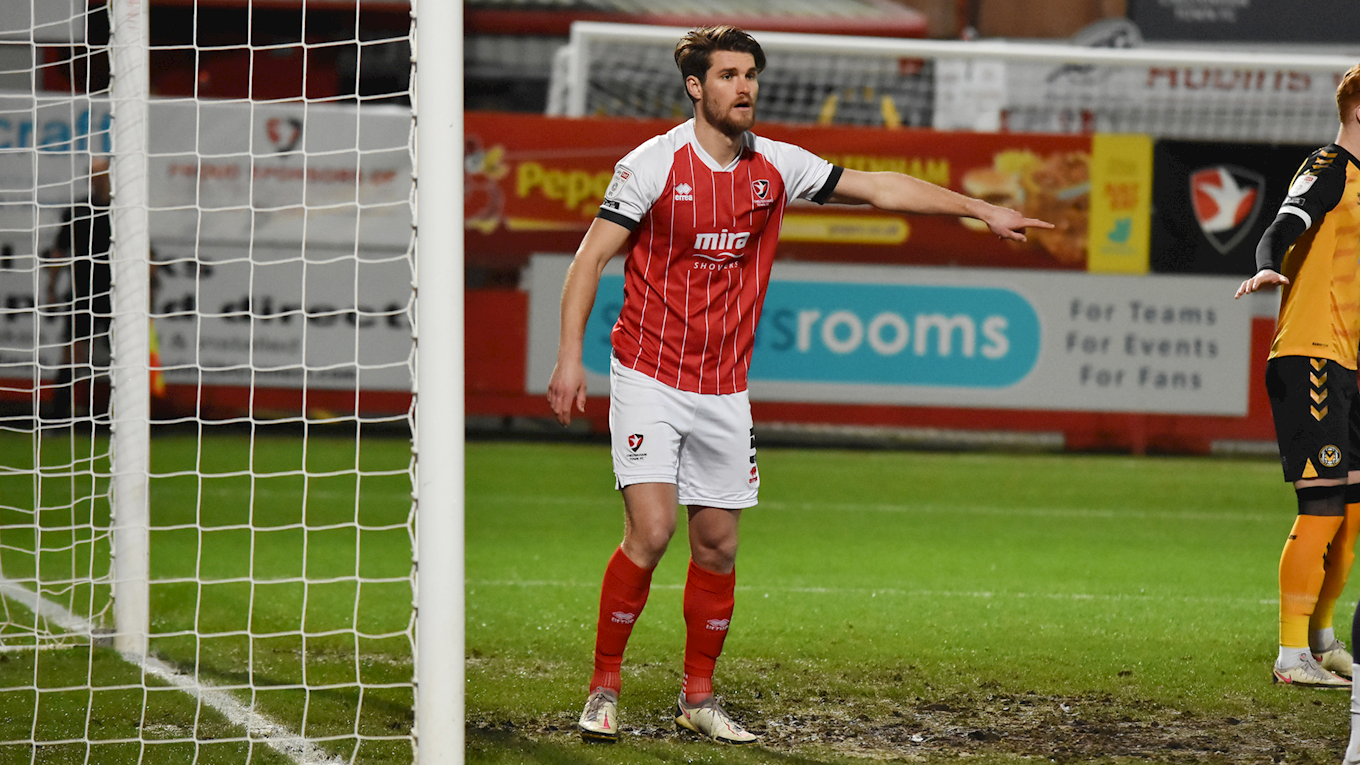 That’s where the magnificent efforts from both Cheltenham and Manchester City’s fan bases have come in, with digital ticket sales and fan fundraisers helping the club in the absence of what would have been a sell-out crowd.

“We want the fans there and they want to be in there to watch us play. It is such a shame on that front but going back to the times we are in and the financial implications - it’s great that we’ve managed to get this tie and secure the television money that comes with that.

“It is a bit more money for the club and the fans have absolutely played their part, going above and beyond to be able to raise that sort of money is phenomenal, with help from the City fans as well! They understand the state of the game so it’s great and the players are well aware of it, we are all for it and massively behind it.”

With eyes up and down the country focused on this game come 5:30 on Saturday, the Citizens certainly pose a completely different test to anything Cheltenham have faced so far this season. However, with 184 career appearances and counting, do City compare to anything Raglan has faced before?

“I’ve been lucky to play against a couple of really good sides like Leicester City a couple of years ago and that was just a pre-season game. Considering these would be seen as a level above Leicester City, it’s a difficult game. It’s still a football match though, as long as we can get up against people, put a few tackles in, you just never know.”

While manager Michael Duff referred to the game as a free hit, Raglan isn’t exactly buying it:

“Well he said the same when we played Crewe! It’s a bit different to playing Crewe who are a great side in their own right. I know what he means, when we played South Shields the pressure was on us because we are the team who play at a higher level and that’s it. If you win, everyone expects you to win so that will be what Manchester CIty are thinking.

“For us, we just have to go out there and give our best. Obviously we will do that, we know that if we are not at it then we will get severely punished - we want to be at the level we expect of ourselves and then some. I can’t say what the result might be but we will at least come off the pitch happy with our own performance.”

If Cheltenham are to cause an upset, they’ll be hoping to get the first goal as the aforementioned singer once said, the first cut is the deepest.