Cheltenham Town's FA Cup tie with Manchester City has brought the club media attention from across the world over the past seven days.

Just under six million people tuned in on BBC One in the UK to watch Michael Duff's side's magnificent performance against the Premier League big hitters.

International audiences also enjoyed one of the world's best teams trip to Gloucestershire, with social media publicity for the club at an all time high.

Here is our look back at some of the amazing media coverage the club has enjoyed while being in the spotlight for the fourth round appearance in the world famous competition.

Up to six million people tuned in to watch the tie on BBC One as Gary Lineker anchored the coverage alongside pundits Alan Shearer and Micah Richards with Steve Bower and Danny Murphy on commentary duties.

BeIn Sports were on hand to provide coverage across Europe, the Middle East, North America and Asia with Steve Book, Michael Duff and Alfie May all featuring on the channel. Sony India also broadcast the match in India.

Radio commentary on the night was provided by BBC Radio 5Live with Conor McNamara and Andy Reid in position in the Autovillage Stand, while TalkSport also covered the game with Sam Matterface and former England international Trevor Sinclair.

On top of that on Saturday there was a great feature with Duff, associate director Murry Toms and some of the club's media interns from the University of Gloucestershire's Sports Journalism course on Football Focus with Mark Clemmit. 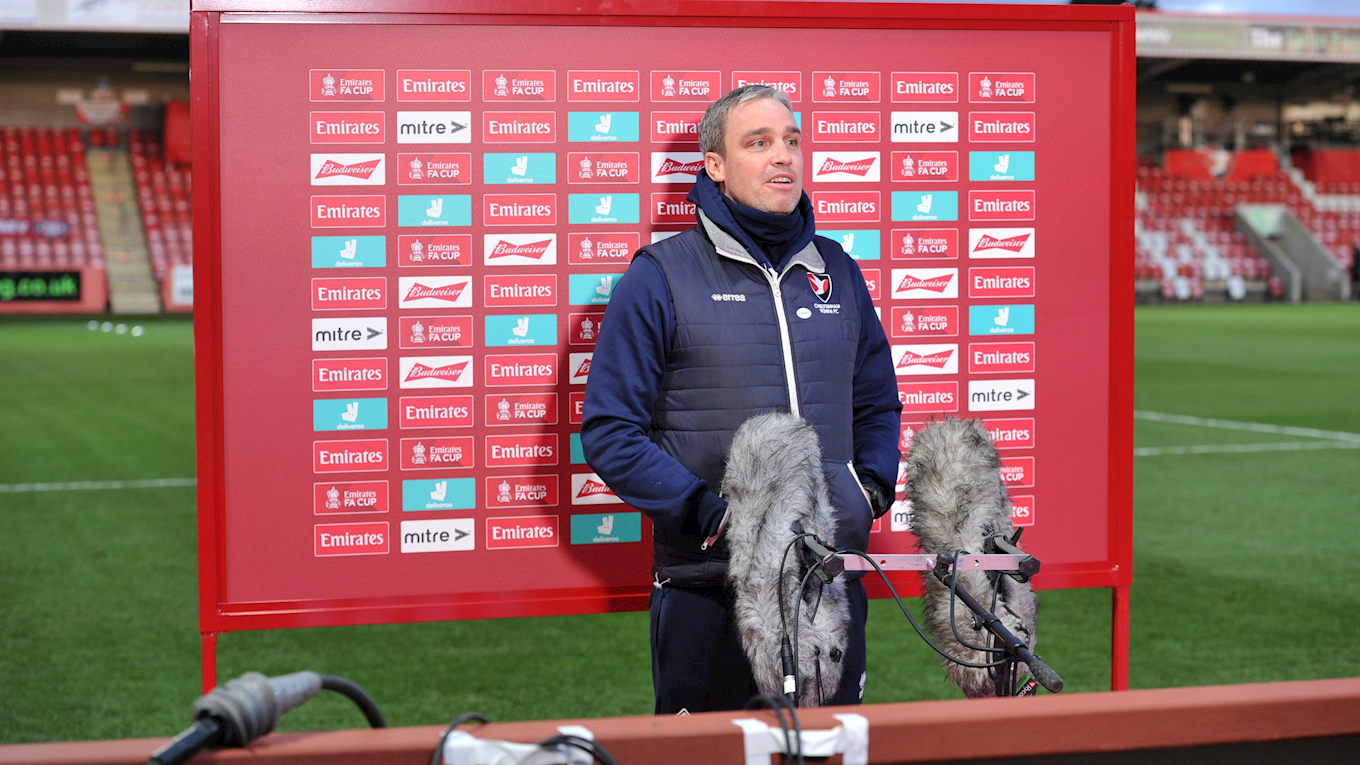 Tozer was also interviewed on TalkSport before the game and will feature on ths week's EFL podcast with Mark Clemmit.

Goalkeeper Josh Griffiths joined Sky Sports' Johnny Phillips for a special feature on Soccer Saturday on the day of the game.

Both Duff and Alfie May were guests on the FA Cup Preview Show which was broadcast internationally, while Duff also featured on Sky Sports News, TalkSport, and on BBC Radio 5Live throughout the weekend. He also appeared on UTV in Northern Ireland ahead of the game. 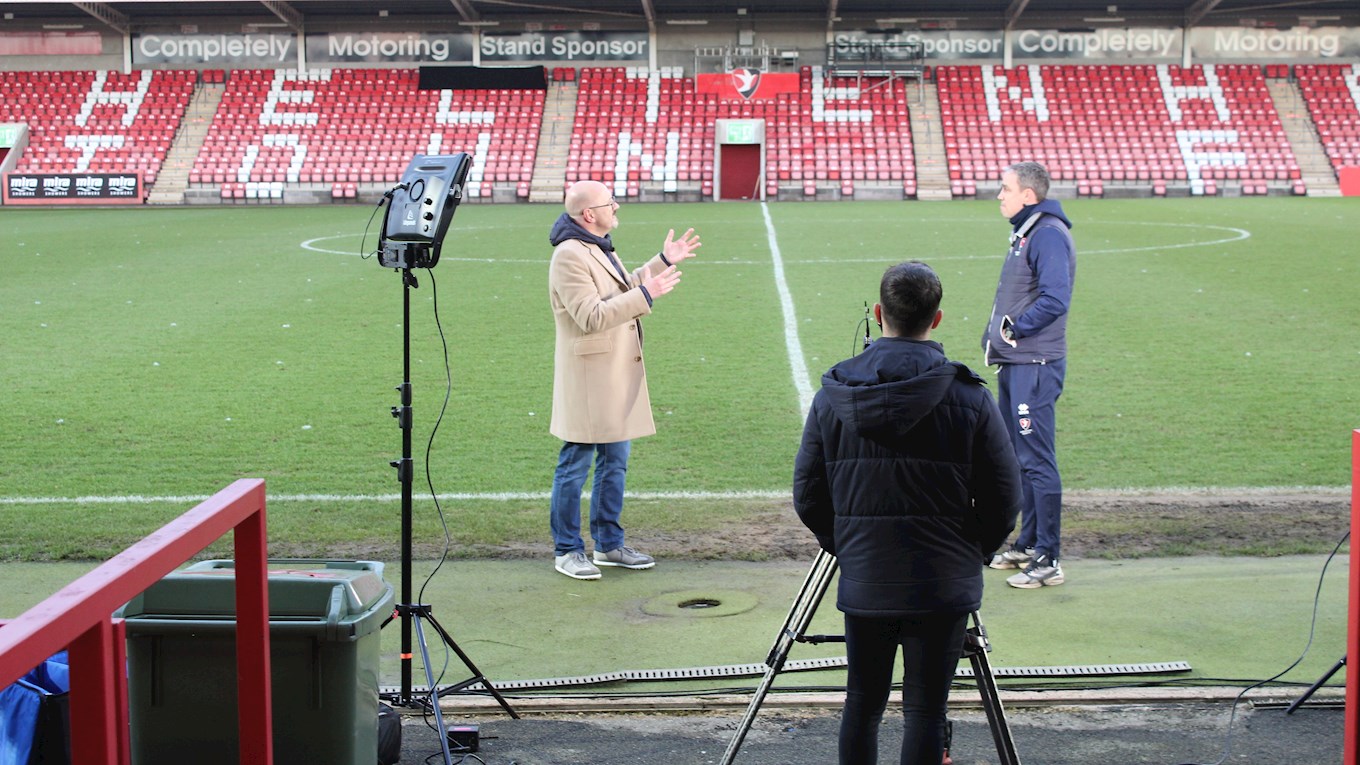 Duff's two sons, Tommy and Jack, also took part in a special feature to preview the game on BBC Points West while there's also been great coverage on ITV West Country across the weekend with Alfie May set to appear on both programmes on Monday evening to reflect on his goal and the game.

Chairman Andy Wilcox spoke at half time on BBC One, featured on Sky Sports News in the build up to the tie and also featured on BBC Radio Gloucestershire on Monday morning's breakfast programme.

The club enjoyed coverage across the national newspapers both before the game and on Sunday having run City close to one of the greatest upsets ever recorded in the competition.

Assistant boss Russell Milton, goalkeeper coach Steve Book and club secretary Paul Godfrey appeared in The Guardian speaking to Ben Fisher, with defender Will Boyle also on interview ahead of the match.

Irishman Sean Long captured the attention of the Irish media with the Irish Sun, Irish Examiner and 42.ie.com speaking to the wing back.

Chris Hussey was featured in The Sun discussing not only the occasion but also important issues around mental health and his new business that he has set up in Worcester.

Charlie Raglan was featured in The 'i' ahead of the game and also spoke to The Sun. He was also interviewed by Tom Roddy from The Times in the build up to the match.

Skipper Ben Tozer was also interviewed for a piece that featured in The 'i', while the defender also spoke to Neil Johnston for a special feature on the BBC Sport website. 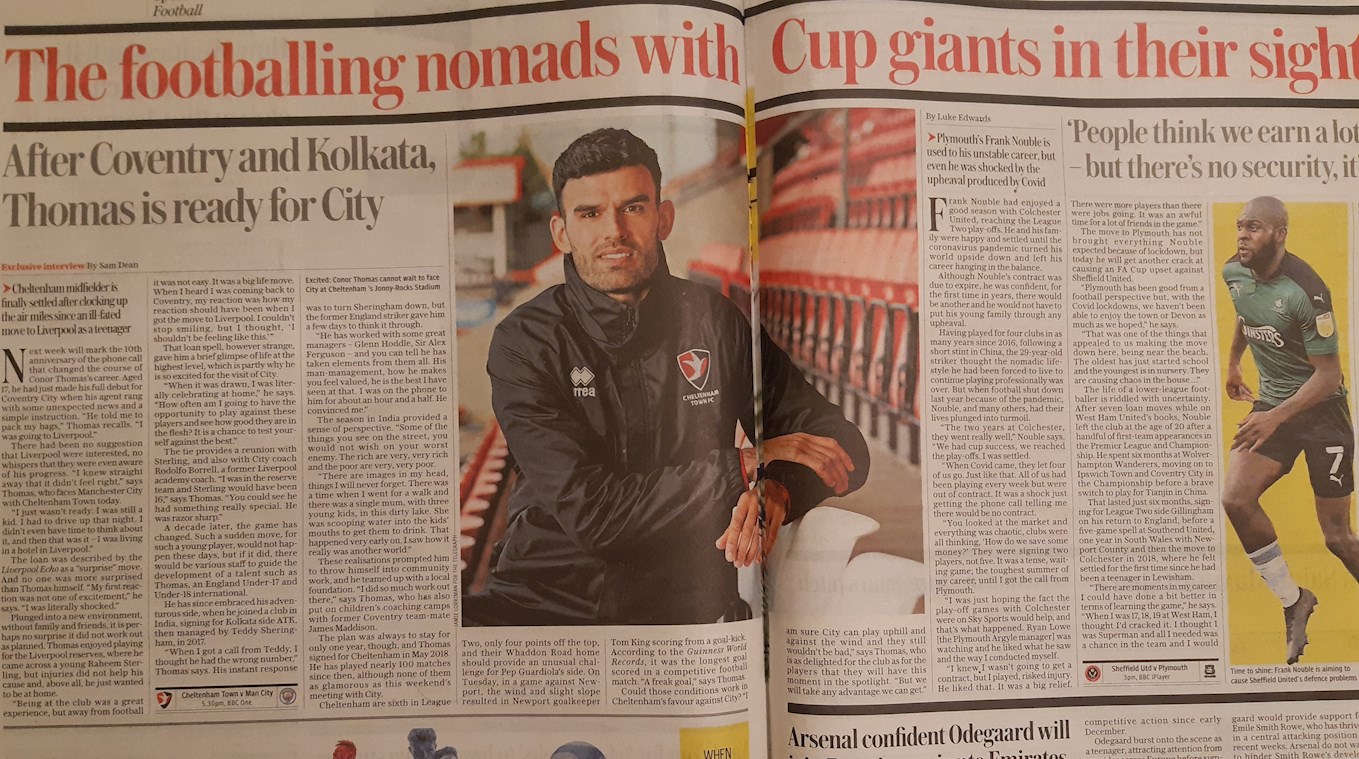 Midfield man Conor Thomas was featured heavily in the Telegraph detailing his story that's taken him from the start of his career to Cheltenham via a spell playing in India.

The Daily Mirror ran a interview with Matty Blair as he looks to follow in the footsteps of his father, Andy, a European Cup winner with Aston Villa in his playing days.

Manager Michael Duff was heavily featured in the papers. He spoke to Alex Spink for a piece in the Daily Mirror and was also in the Manchester Evening News ahead of the game. Matt Barlow from the Daily Mail also spoke to the Robins boss. BBC Northern Ireland also interviewed him ahead of the fixture.

There was also great coverage locally in the Gloucestershire Echo with special features looking back on Cheltenham's relationship with Man City, from Steve Book's uncle Tony, to former player Bill Gourlay.

Unsurprisingly the world's social media channels were soaking up the game with the possibility of Cheltenham being so close to pulling off a famous upset drawing plenty of attention.

The club's social media channels also saw numbers never seen before in the history of the club. An additional 3,000 new Instagram followers were gained alone during the 90 minutes, with thousands more following the club's Twitter account and liking the CTFC Facebook page.

Over the course of the tie on Twitter the club's account earned 14.5 million impressions, 12,500 mentions and over 530,000 profile visits.