Manchester City’s Premier League quality eventually told as Cheltenham Town’s FA Cup adventure was ended at the fourth round after falling to a 3-1 defeat at the Jonny-Rocks Stadium.

Cheltenham were looking to reach the FA Cup fifth round for just the second time in the club’s history, previously doing so almost a decade ago, in the 2001/2002 season.

In the club’s first ever competitive meeting with Man City, Alfie May opened the scoring in the second half before late goals from Phil Foden, Gabriel Jesus and Ferran Torres completed a City comeback.

Pep Guardiola’s side travelled to the Jonny-Rocks Stadium 16 games unbeaten in all competitions, having advanced through to the Champions League Round of 16 and winning eight Premier League games during that time.

Though Michael Duff’s Robins were in no mood to simply roll over against their vastly superior opposition.

Cheltenham started the game with attacking intent, by carving out an opening 90 seconds after kicking-off. Matty Blair, who was plying his trade in the Conference North a little over ten years ago, beat Eric Garcia in a footrace before sweeping across a menacing delivery in front of Zack Steffen’s goalmouth.

May nearly made enough of a connection with the ball to steer the ball goalwards, but after taking a knock for his troubles, City were able to alleviate Cheltenham’s early pressure.

Brazilian number nine, Jesus gave the hosts an even earlier scare inside the first minute of proceedings, but it was Benjamin Mendy who came the closest to opening the scoring at the Jonny-Rocks in the first-half.

Having retrieved a loose cross from the right flank, Mendy struck a volley back across goal which was sailing towards Josh Griffiths’ top corner if it wasn't for Ben Tozer’s miraculous intervention to clear the ball off the goal line with his head.

City’s growing dominance in the game continued to test the League Two outfit’s resilience, but goalkeeper Griffiths would make a crucial save to deny Torres on the 18th minute. The Spaniard latched onto Foden’s cross and looked destined to score, but Griffiths showed tremendous agility to get down to his left and deny him.

Foden himself has been involved in eight goals in his last eight FA Cup appearances, averaging a goal or assist every 64 minutes in the competition, but hosts Cheltenham held on to a half-time stalemate as a fireworks display lit up the Gloucestershire night sky.

Despite the lack of Cheltenham fans in the stadium, a party atmosphere has been brewing in these parts for several weeks since former England striker Peter Crouch pulled the club out of the hat, swiftly followed by the big hitters from the Etihad Stadium.

The Robins would play out one of the most glamorous fixtures in the club’s 134 years of history, with the odds firmly stacked against the hosts producing a memorable FA Cup upset.

Since losing against Wigan 0-1 in February 2018, Man City have won their last seven FA Cup games against sides from a lower division by an aggregate score of 26-4. While the Robins have lost all eight of their League Cup and FA Cup meetings with Premier League opponents.

Seven minutes into the second half and Cheltenham were reminded of the threat posed by their Premier League counterparts. Jesus evaded Cheltenham’s offside trap for the first time on the night, but squandered the opportunity to make full use of Foden’s slide-rule pass, by striking the post with his misplaced finish.

So often in FA Cup ties, it would be the minnows who’d pay for such missed opportunities, but on nights like these, Cheltenham were determined to make full use of the underdogs tag.

Duff’s side initiated a brave press to force Harwood-Bellis in turning the ball away for a throw-in inside his own half. Here was an opportunity to produce another chapter in Cheltenham Town's proud history.

Ben Tozer’s long throw-ins have regularly been exhibited in League Two this season, but keen to put his trademark into the FA Cup history books, he prepared to hurl the ball from his familiar launch pad.

Despite the several divisions that separate the two sides, on the night, there was little Man City could do to prevent Tozer’s dangerous delivery towards the six-yard box. Testament to the desire installed amongst the Cheltenham side, May made sure he was first to pounce on a loose ball to fire the Robins into an extraordinary lead.

Cheltenham's celebrations will live long in the memory but, for all the hard-yards put in by Duff’s side, City’s top flight quality would eventually show.

Foden’s goal in the 81st minute was shortly followed up by late goals from Jesus and Torres to complete the comeback.

Cheltenham will now turn their attention to League Two duty, as Oldham Athletic make the journey to the Jonny-Rocks Stadium on Tuesday evening (kick off 17:30). 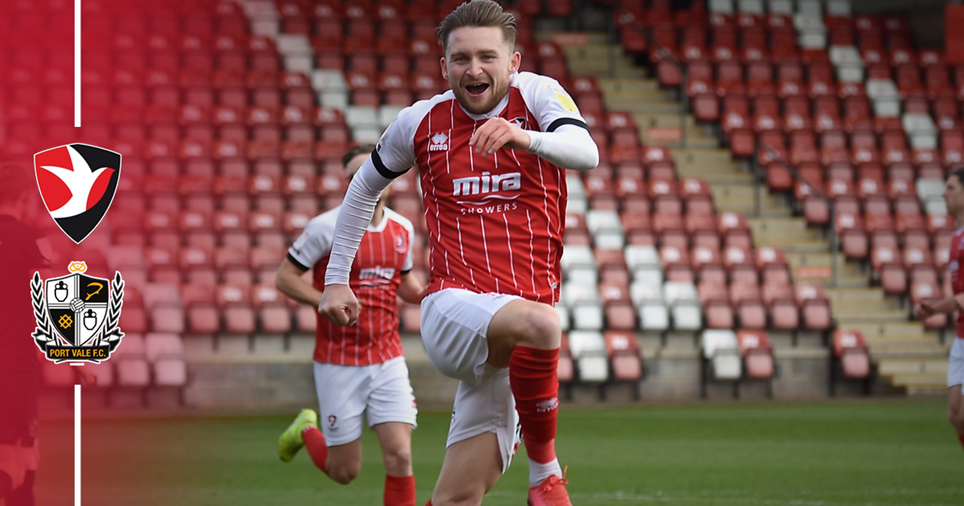 
Cheltenham Town have won a fourth League Two game in a row, after beating Port Vale 3-2 at the Jonny-Rocks Stadium. 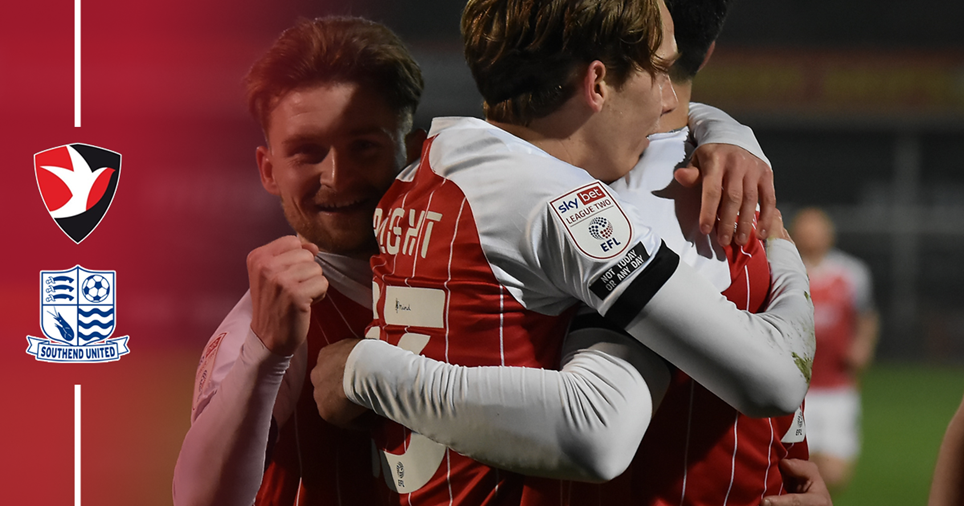 
Cheltenham Town have moved to the League Two summit after beating Southend United 1-0 at the Jonny-Rocks Stadium. 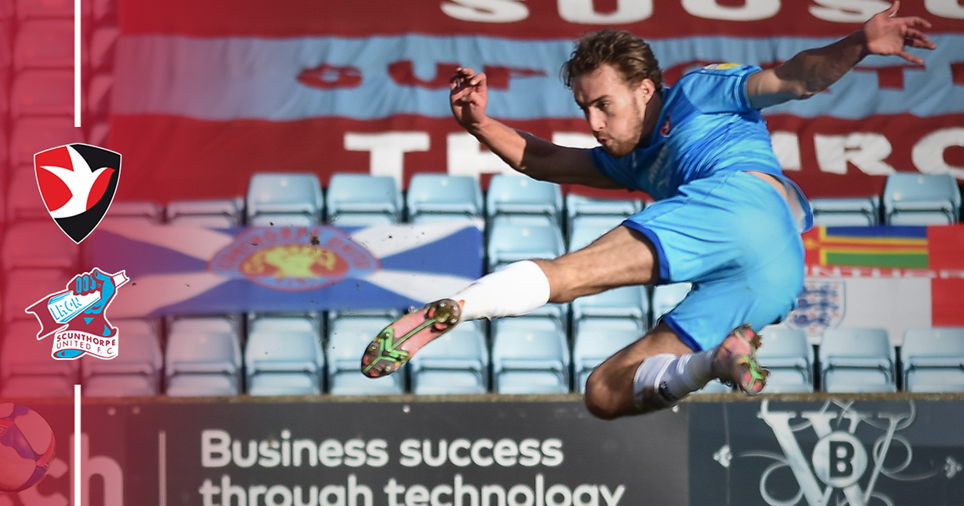 
Cheltenham Town's impressive form on their travels continued with this comfortable win at Scunthorpe United. 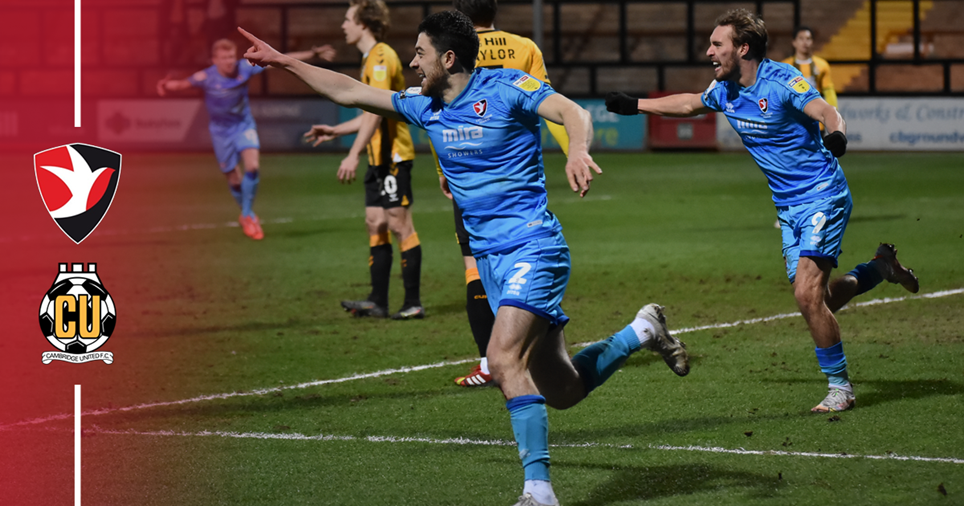