Josh Griffiths believes that Cheltenham’s week of self-isolation was “a blessing in disguise” as he looks ahead to a trip to Walsall on Tuesday evening.

Due to positive COVID-19 tests, two fixtures against Barrow AFC and Carlisle United were postponed as the players and staff were required to self-isolate, while Saturday's game at Walsall has been moved to Tuesday because of a frozen pitch on the weekend.

For Griffiths, he believes the mental and physical break could pay dividends later in the season.

“I think it was a blessing in disguise to have that week away to gather our thoughts and go back into the season to try and finish strong," he said.

“Everyone wants to be playing games and I’m sure the fans wanted to watch us play. It’s more of a mental break than anything as physically the lads are capable of playing Saturday and Tuesday every week. I definitely don’t think we get tired but it’s nice to have that mental break, set more goals and then regroup to go again.”

On loan from West Brom, this is Griffiths’ first experience of senior football and it’s a chance he has relished - making 31 appearances in all competitions so far this season and keeping 14 clean sheets.

“Yeah I am proud of it,” said the 19-year-old. “It’s a good record but I think at the moment you are just caught up with playing a game and immediately looking at the next one. At the end of the season, I’ll look back and think that was a good achievement. At the moment, it’s fully focused on the next game and trying to achieve something for the club at the end of the season.

“Truthfully there were no targets. It was just to come in and play well, that was all I set myself. As the clean sheets developed, I did look ahead of me to see who’s on the clean sheet table. You want to catch them! I don’t know where I am at the moment but it would be nice to finish at the top of that come the end of the season. Of course that would be good, but as long as we are winning that’s all that matters.” 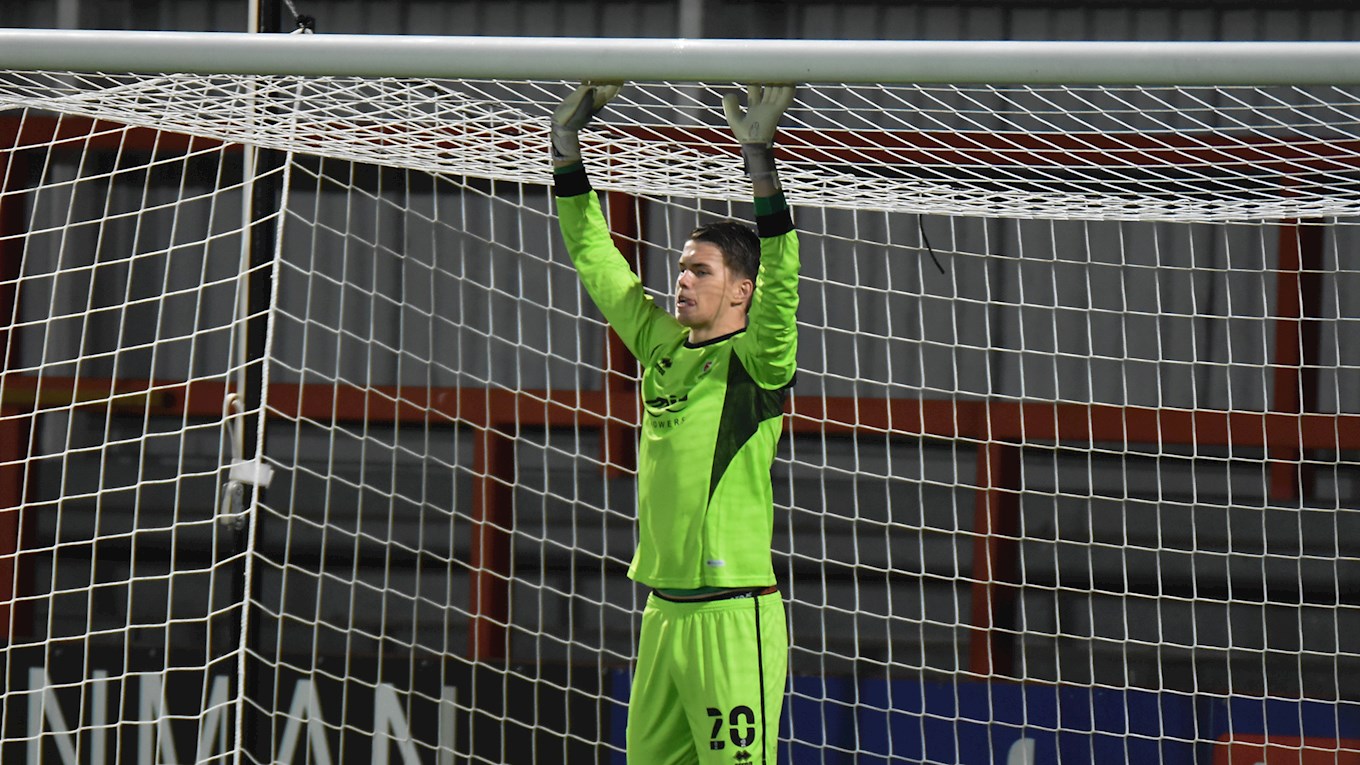 Arriving as young blood, Griffiths has not looked out of place in a defence packed with experience. It’s testament to the youngster, with the back five against Harrogate having an average age of 29, that decade difference is hardly noticeable.

However, it’s something that Griffiths recognises and has been using to his advantage since arriving at Cheltenham in August. Whether it be the players around him on the pitch or the experienced head of Scott Flinders keeping him on his toes:

“It’s definitely helped,” said Griffiths with enthusiasm. “Especially the first few weeks where I was settling in to my first season playing men’s football. I think playing alongside the likes of Toze (Ben Tozer), Boyley (Will Boyle), and Rags (Charlie Raglan), has been really good for me because they helped me through the first few games.

“Then it’s just natural as I started to build more confidence and then Scotty and Booky (Steve Book) have been great in giving me some tips and advice. It’s been quite easy to settle in. There’s always competition with Scotty and I think I’ve said it before but I hope I’m pushing him as much as he pushes me.

“Goalkeeping is a strange position, everyone knows of the goalkeepers union! Me, Scotty and Max (Harris) look out for each other. Whoever is playing, the other two would back them for sure.”

Watch Tuesday's match at Walsall online by purchasing an iFollow match pass for £10.