Goals from Connor Jakeways, Joe Hunt and Brennan Denness-Barrett saw Cheltenham safely into the fourth round of the FA Youth Cup.

It was an even start at Butlin Road in the third round tie between Rugby and Cheltenham with both sides enjoying their share of possession in increasingly poor conditions. Pete Haynes’ side had their first sight of goal after just five minutes when the hosts took their time to clear a cross but no one in a red shirt could reach in time.

The ten minute mark saw the visitors start to take control, moving the ball well in midfield and defence but being frustrated by the final ball, Rugby defending well in the opening stages. The hosts weren’t pegged back though, getting forward well and looking to be through on goal in the eleventh minute but the linesman’s flag stopped Mason Platts’ promising run.

On the 13th minute Cheltenham took the lead, Felix Miles being played through on goal and claiming he was taken out by the on rushing keeper but Brennan Denness-Barrett reacted quickest to slot home the opener, his third in two games in the FA Youth Cup.

The hosts had their best chance of the game at the 20 minute mark, Tyler Scott being played through only for Will Taylor to get his body in the way and steal the ball from the attacker.

Parsisson was called into action soon after, coming out bravely to smother a through ball. The hosts continued to pile on the pressure with Leo Stone going through down the Rugby left, the number ten saw his effort saved by Parsisson and Taylor was on had to fire the rebound out for a corner. The set piece put further pressure on the Cheltenham goal but Miles was on hand to clear to Denness-Barrett who won a free kick at the halfway line.

Parsisson was called into action again on the 30th minute, coming out to tackle Tyler Scott on the edge of the box, Platts’ picked up the ball and looked to have found the equaliser but Will Armitage was on hand to head the ball off the line.

Captain Joe Hunt doubled the lead after 42 minutes, picking up a loose ball in the box after good work from Dennis-Barrett to get the ball forward and create the chance for Hunt to fire past the defender and goalkeeper.

Half time saw Cheltenham go in at the break with a two goal lead, dealing well with the home side’s pressure to keep the ball out of the net and the clean sheet intact at half time.

Connor Jakeway’s made it three just three minutes into the second half, his shot from the right going all the way through and in at the back post to put the game to bed early on in the second half.

Five minutes later and it was four, Jakeways finding the same corner from the same side of the pitch, volleying home Hunt’s throw with the 'keeper having no chance to stop it. 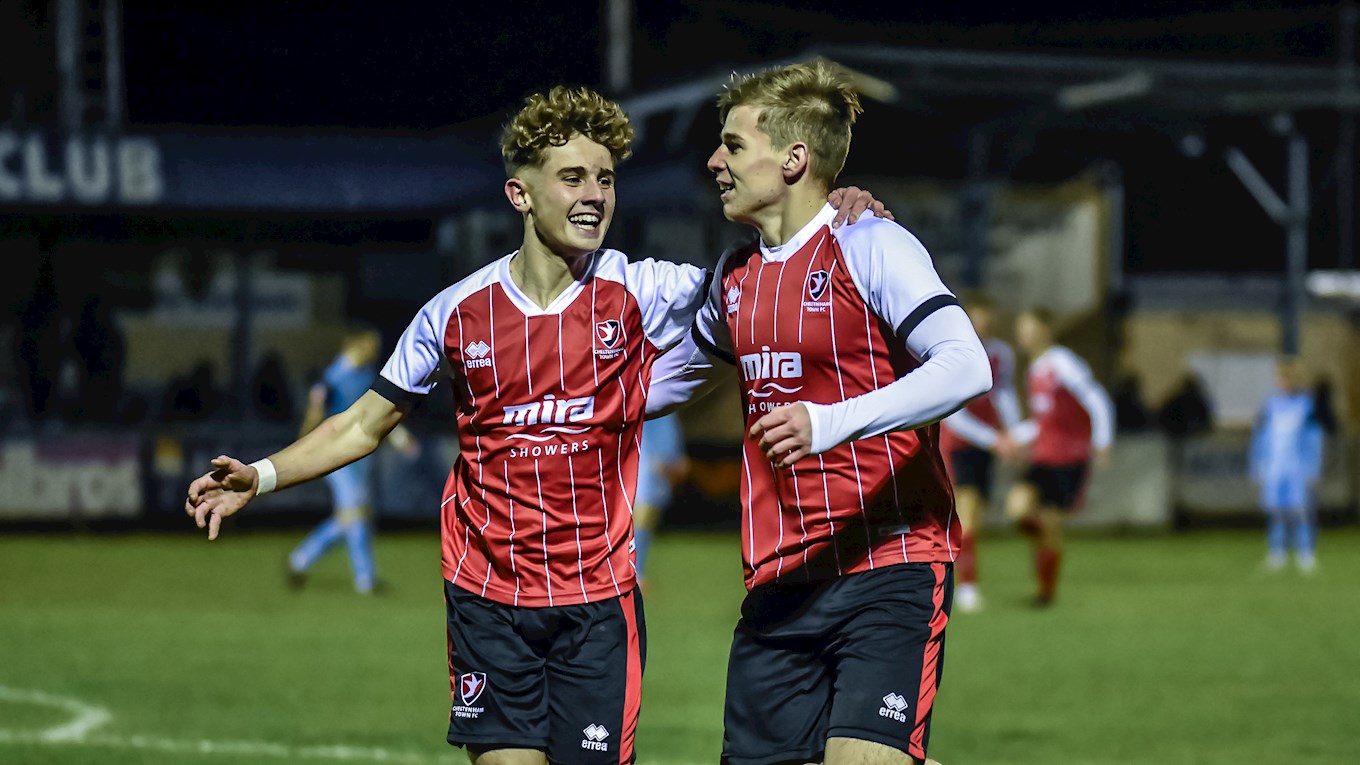 Rugby’s best chance since the restart came after Parsisson was beaten to the ball by Scott, but his attempted header saw the ball off the keeper for a corner, but the set piece came to nothing and Cheltenham were able to clear easily. The home side’s pressure started to wear off with Haynes’ professional set up proving to be the difference as the game waned on.

The host’s attacks became fewer and farther between as the second half progressed with Cheltenham taking control and halt any attacks soon on with the difference between leagues starting to show.

Rugby’s first chance of the second half came from Joe Taylor whose ball from 40 yards was on target but straight into Parsisson’s hands. Sam Bidcote had another long-range effort with fifteen to go but saw his volley sail above the crossbar.

The game slowed in the final quarter of an hour with both getting the ball forward but neither fashioning a real effort in goal with Rugby limited to long shots and the home side defending well enough to keep the Robins’ attackers at bay. Charlie Dashfield, Archie Woodall and Freddie Willcox took to the pitch late on with the result sealed with half an hour to go.

The last ten minutes went smoothly and quickly with a competitive start to the match slowed by the early second half goals, confirming the result and passage through to the fourth round for Cheltenham Town.