Sky Sports cameras and a second against third clash - the Good Friday meeting between Cheltenham Town and Tranmere Rovers is all set up perfectly for the Easter weekend (kick-off: 3pm).

The Super White Army head to the Jonny-Rocks Stadium as the League Two season falls into single figures on the fixture list.

It's an afternoon of football that promises plenty and the Robins are keen to bounce back from a frustrating loss last weekend at Morecambe against a Tranmere outfit who were competing in League One last season.

The game is live on the Sky Sports Football channel with coverage beginning at 2.30pm.

The club are delighted to have D3D4Football as digital match sponsors for the game.

Manager Michael Duff has a selection decision to make when it comes to his goalkeeper. Josh Griffiths returned to training on Thursday after his time away with the England under-21s squad at the UEFA European under-21 Championships, while experienced stopper Scott Flinders was involved last time out at Morecambe.

Charlie Raglan, George Lloyd and Will Boyle have been back in training as they look to be involved. Matty Blair and Lewis Freestone will be assessed after they both picked up knows last weekend.

Midfielder Chris Clements is definitely out with a hamstring injury.

Watch Michael Duff's Wednesday press conference previewing the game. Midfielder Callum Wright was also speaking to the media ahead of the game.

Following a difficult start to the season the installation of Keith Hill as manager in November has helped Tranmere move in an upward direction as they look to regain promotion to League One at the first time of asking.

Throughout January and February they enjoyed a fine run of form, and when it comes to League Two in their last 20 games they've lost only two times.

They are four unbeaten going into Friday's contest and in March also competed in the Papa John's Trophy final, only to lose at Wembley against League One Sunderland.

Experienced goalkeeper Joe Murphy will be expected to line-up for them this weekend. That's following an achilles injury to long-serving 'keeper Scott Davies last time out in their draw with Mansfield.

At the back Peter Clarke offers plenty of experience with the 39-year-old centre back having started his senior career back in 1999 at Everton. Alongside him former Crewe Alexandra man George Ray, Scotsman Calum Macdonald, long serving Liam Ridehalgh and Sid Nelson are potential defensive bodies too.

In midfield ex-Liverpool man Jay Spearing provides a platform, with the likes of Kieron Morris and Paul Lewis also offering a goal threat.

The presence of Liam Feeney also provides good quality, while Ali Crawford could feature - he is on loan from Bolton Wanderers having made the switch in January. Another January midfield arrival on loan, Nya Kirby, could be involved, while Otis Khan brings useful League Two experience and knows the level.

At the top of the pitch former England striker David Nugent brings a lot of experience. He joined in January on loan from Preston North End.

The appointment of former Cheltenham defender Keith Hill has proven to be a successful one so far. The 51-year-old brings plenty of Football League managerial experience into his role at Prenton Park and he's helped lead them up the League Two table.

He was a central defender in his playing days and turned out for Blackburn Rovers, Plymouth Argyle, Rochdale, Morecambe and Wrexham. His time at Cheltenham came during the 2001/02 season.

As a manager he's made his mark twice as boss of Rochdale, while he's also taken charge at Barnsley and Bolton Wanderers. 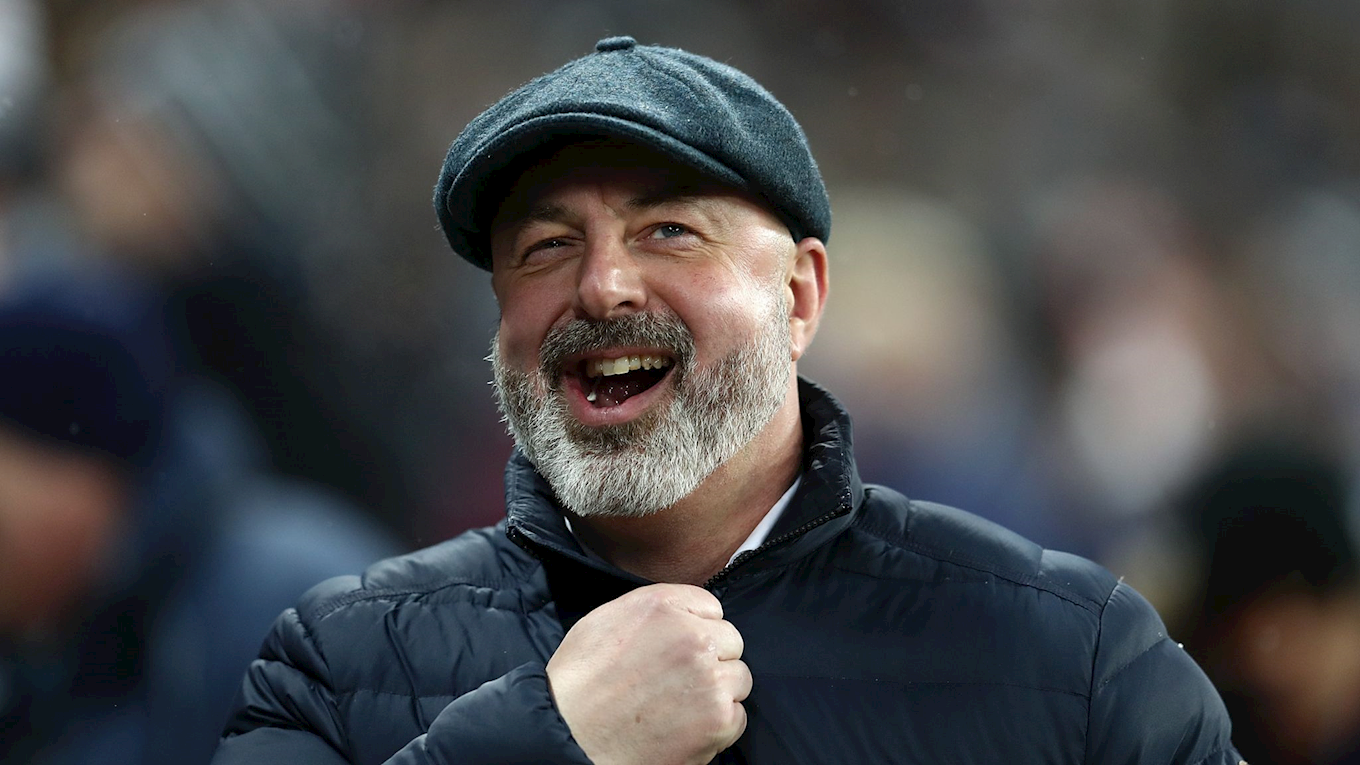 One to watch: Liam Feeney

Liam Feeny joined on loan from League One Blackpool at the beginning of the season. The 34-year-old is an attack minded wide midfielder who has enjoyed a career spent mostly at the top end of the Football League having started in non-league.

His career started at Hayes and he then moved to Salisbury City where his impressive form caught the eye of AFC Bournemouth.

After making over a century of appearances on the south coast he transferred to Millwall and has since gone onto represent Bolton, Blackburn Rovers, Ipswich Town and Cardiff City. 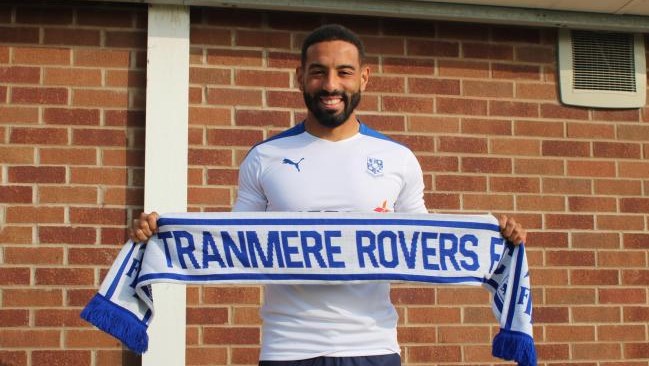 West Brom loanee Finn Azaz is the big interview in the match programme as he discusses the improvements he's made in his game having nearly completed a full season on loan at the Jonny-Rocks Stadium.

You can also catch the latest from the under-18s, Cheltenham Town Ladies Sammy Hallsworth, Michael Duff, the opposition and much more.

The programme is available to purchase in 24 page print format online from the club shop for £2.50.

It's also on sale digitally via the MatchDay Digital App in a 48 page edition for £1.99. Buy it from their website, or on Apple or Android. 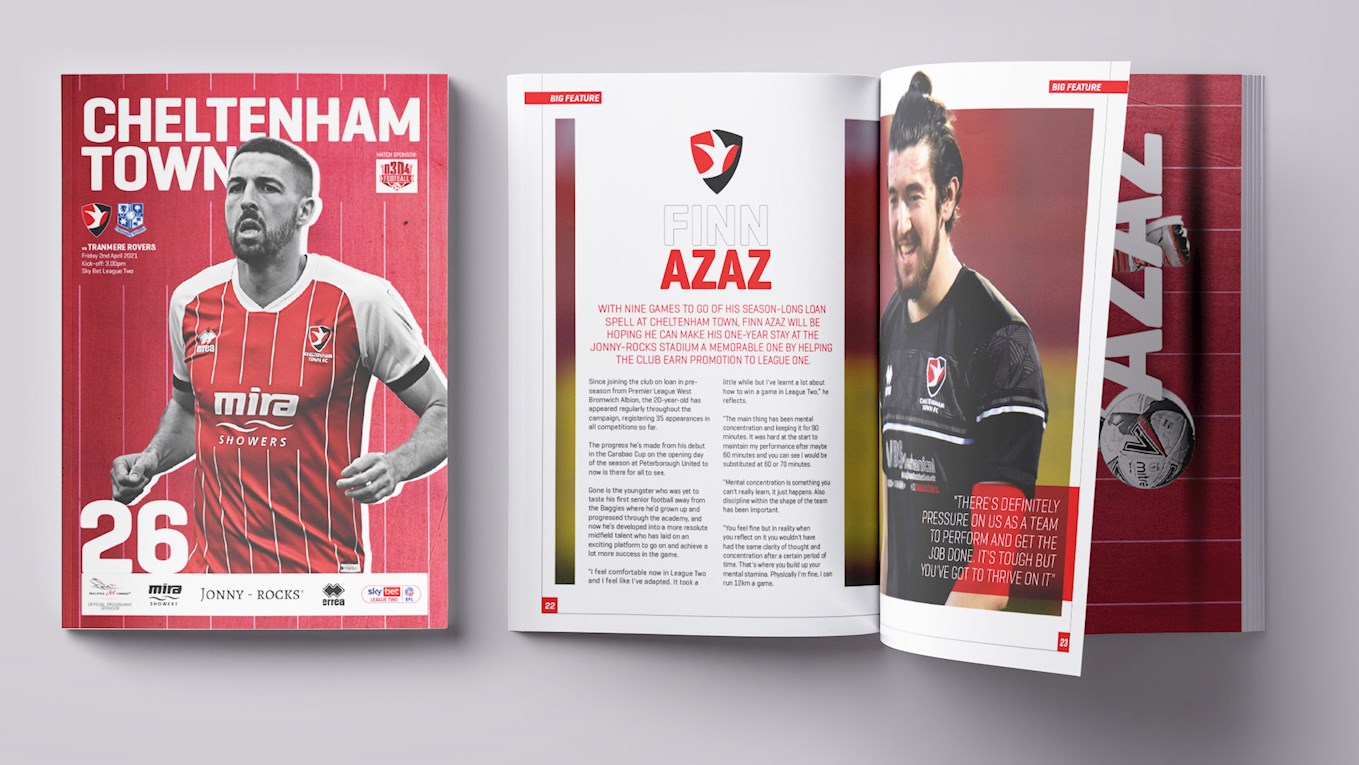 Sit back and enjoy watching Sky Sports' coverage on the Sky Sports Football channel. Coverage begins at 2.30pm and includes a pre-game interview with Ben Tozer.

An iFollow match pass is not available to purchase for the game. Fans watching abroad can access the match from this list of channels.

At the full time whistle visit the club website to read the match report and to watch Michael Duff's post-match press conference.

You'll be able to watch extended highlights on iFollow when they become available a few hours after the game.