Alfie May and his partner welcomed a new face into their family recently with the birth of their second son.

It's another cherished moment in what has been a special time in his career at his second Football League club.

He's looking to achieve the same promotion from League Two with Cheltenham as he did with Doncaster Rovers back in 2017 only months after signing for the Keepmoat Stadium side.

The 27-year-old has been reflecting on the newest addition to his family, adding to his goal tally of 12 this season, and his memories from automatic promotion success with Donny.

How have things been welcoming another new member to your family?

It's been a busy week. We've had mine and my missus' parents both there so it's been quite easy with them helping. It's been a nice week with a new little addition to the family. I think my missus over the last 20 months has been pregnant for 18 months, so she's had a hard two years with the pandemic and being pregnant. But we've got two little boys now and it's amazing.

Because of covid when you had your first boy last season you couldn't have your parents around. Has it been nice to have them with you this time?

It has because this time around we were allowed a support bubble. We didn't know about it and I don't think a lot of people who are pregnant know about it. So this time it was easy but last time was tough being the first child as well. We didn't have a clue about parenting! This time we probably wanted it around the other way in terms of help last year but it's one of those things. It's been emotional but it's been amazing.

Probably the first baby did affect in terms of being in Cheltenham. We couldn't do anything and we couldn't go and visit people. My missus being pregnant for the first time it was horrible to leave her because she had nothing to do in the day if I was in training. I'm a massive worrier myself anyway, so that was in the back of my mind. But this one I think it's been free flowing and quite easy and my missus has done an unbelievable job with it. She is so strong and I can see in the birth of my children how strong women are. It's amazing what they go through during the pregnancy with the morning sickness, the tiredness and then being at home with kids itself. It's hard so my hat goes off to women. 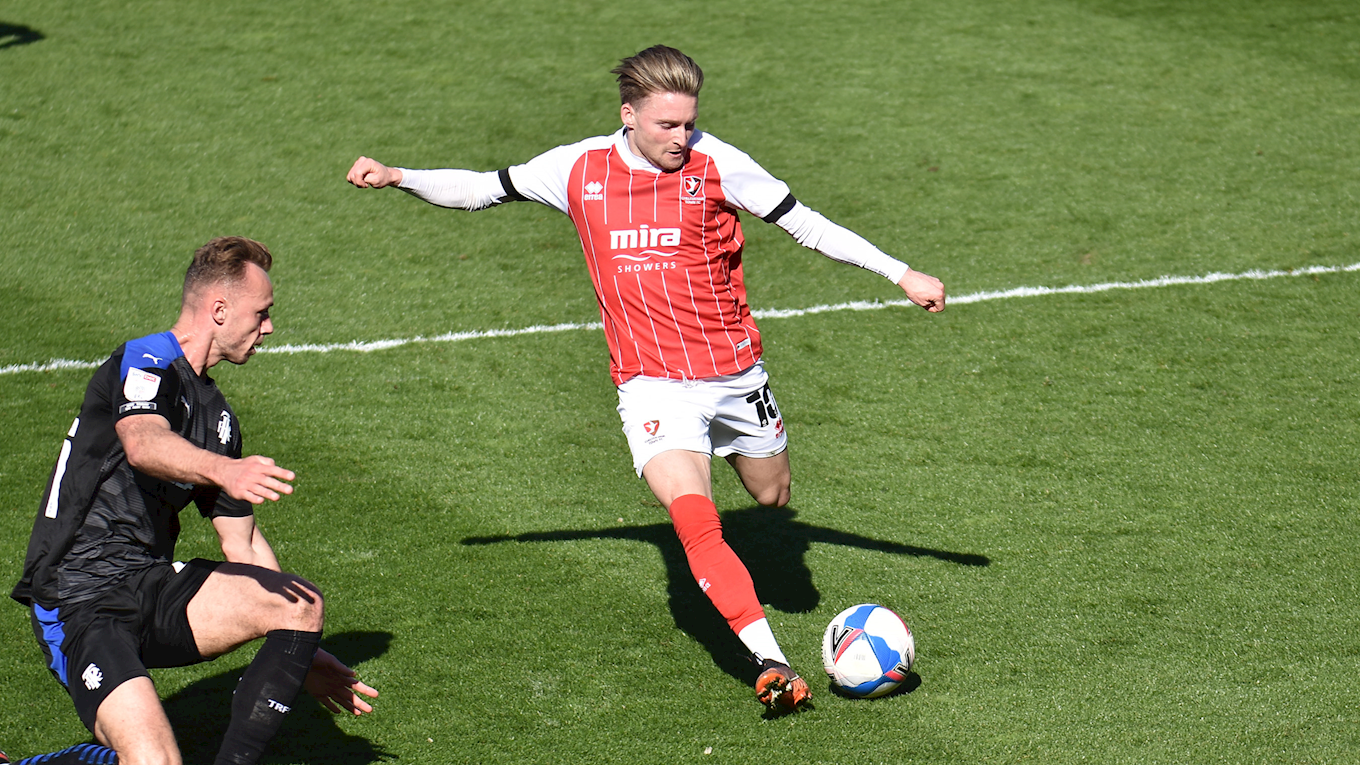 You scored in the 4-0 win over Tranmere. Was it nice to do that in front of the TV cameras again?

It's nice to score in front of the cameras but I want more goals and I'm just going to keep chipping away now until the end of the season and see how many I finish on and try and do the important stuff for the team. It's not about myself or others, it's about us as a group now, and to kick on and get that promotion that we want.

You had to run in behind to score the goal against Tranmere. Are those positions you want to find yourself in more often?

That's the type of player I am. I want to be on the shoulder. We spoke as strikers and for the Monday game at Grimsby me and Sam (Smith) were offside in the first half a couple of times. We just want to be on the end of the shoulder. We know what defenders we play against and we just want to be running towards the goal. It's frustrating if we're offside for the team because we know the ball is just going to be lumped into the big man up front, so it's important for us to stay onside but that is a big thing in my game - running in behind and chasing loose balls.

How have you found playing with Sam Smith since he came in at the end of January?

Sam's been superb. He's not the target man that people think he is. He's got great feet and he competes very well. I just try and gamble off him as much as I can and his hold up play is brilliant. He's got a few goals since he's been here and he has been a good signing. Hopefully we can stay together and get as many goals as we can. 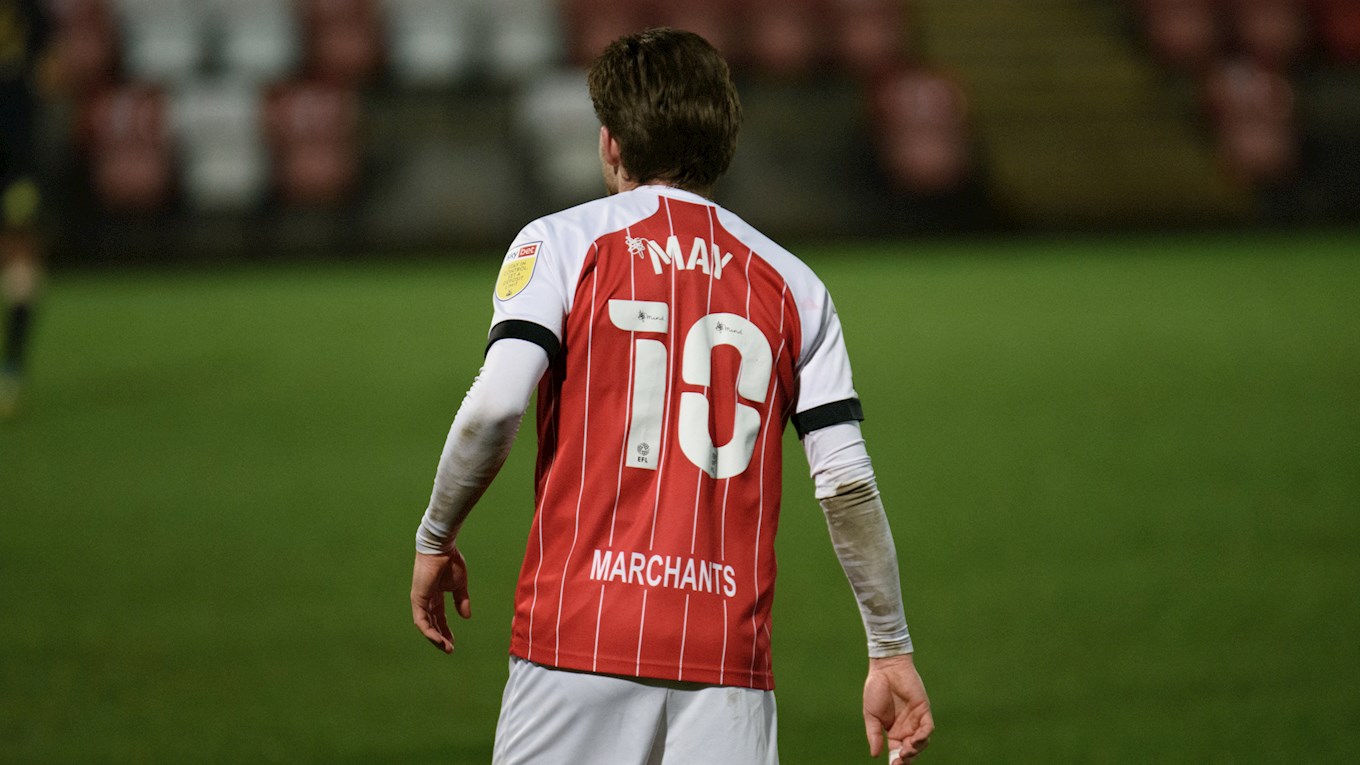 You have achieved automatic promotion out of League Two before when you signed for Doncaster Rovers. What are your memories of that?

I joined in January and we got promoted at the end of April at Mansfield. We had about four games left and at Mansfield Tommy Rowe scored with a header. I remember more so the pitch invasion after. I've played non-league and you'd never get a pitch invasion. You'd probably have maximum 300 fans, sometimes on a Tuesday night you'd get a man and his dog there on his own. When you see that I was trying to get out because I saw our players going into the changing room but I was still buzzing because I've just joined a team and got promotion straight onto my CV. I remember the security guards dragging me out and there were so many fans in there. I got in and necked a few bottles of champagne and squirted them about. It was a good feeling and as the gaffer says it is that 15 minutes at the end of the season when you achieve something, it's only 15 minutes long and then we're back at it with a new season.

In terms of achieving promotion with Cheltenham, because you've been a part of the project long-term will that feel special?

It doesn't come around often getting promoted, winning titles and finals. Football is a short career so to get promoted now with Cheltenham and the games that I've played and the goals that I've scored it means I've given something to the team. It would mean a lot and you can celebrate with your family. It's these kinds of things that when your kids are older you can show your kids that you've won League Two twice, if we win it, and things like that. It's emotional because football is an emotional game. It's a great game and the end goal is to be promoted.