Cheltenham Town Ladies striker Jade Grove is confident that the Robinesses can pull off an FA Cup upset at the weekend against Gillingham Women.

Grove, 20, is CTLFC’s top goal scorer this season, and she believes the team can pull off an upset against higher league opposition.

She said: “We are confident. We are always confident going into games. We think we can put up a really good fight.

“If you look at the Portsmouth game, we did really well to get to 0-0 at full-time, and we are aiming to go out in the same fashion with the same fight and hunger against Gillingham.

“We want to give it our all and see how it goes.”

It’s been a crazy week for Tom Davies’ side. The Robinesses were defeated 2-0 (aet) against Portsmouth Women in third round last weekend.

However, were reinstated back into the competition, after it was discovered that Pompey fielded an ineligible player.

Striker Grove summed up how this week has gone so far for the side ahead of the third-round clash against The Gills.

“It’s been crazy,” the 20-year-old reflected. “It’s been a rollercoaster of emotions. We didn’t realise until Tuesday at training that we’d be playing them on Sunday.

“So, when everyone found out, everyone was buzzing and so excited. The energy around training and the group chat was amazing and we are ready for Sunday.”

The magnitude of this tie has been amplified for a few reasons. The first being the winner of this tie plays the mighty Arsenal Women in the next round. A mouth-watering tie for the victor to look forward too.

Secondly, this game is being played at the Jonny-Rocks Stadium which leaves an excited feeling amongst Grove and the rest of the team.

“I am really excited to play at a bigger stadium,” the 20-year-old stated. “For me, I have never played at the stadium before, but I know that a few of the girls have.

“Originally, we didn’t know that we would be playing there, so when we were told, we all got more excited.

“It’s a great opportunity to play at the men’s stadium, so we are just buzzing.”

One aspect of the performance that the Robinesses will be looking to improve upon at the weekend is their play in the final third of the pitch. 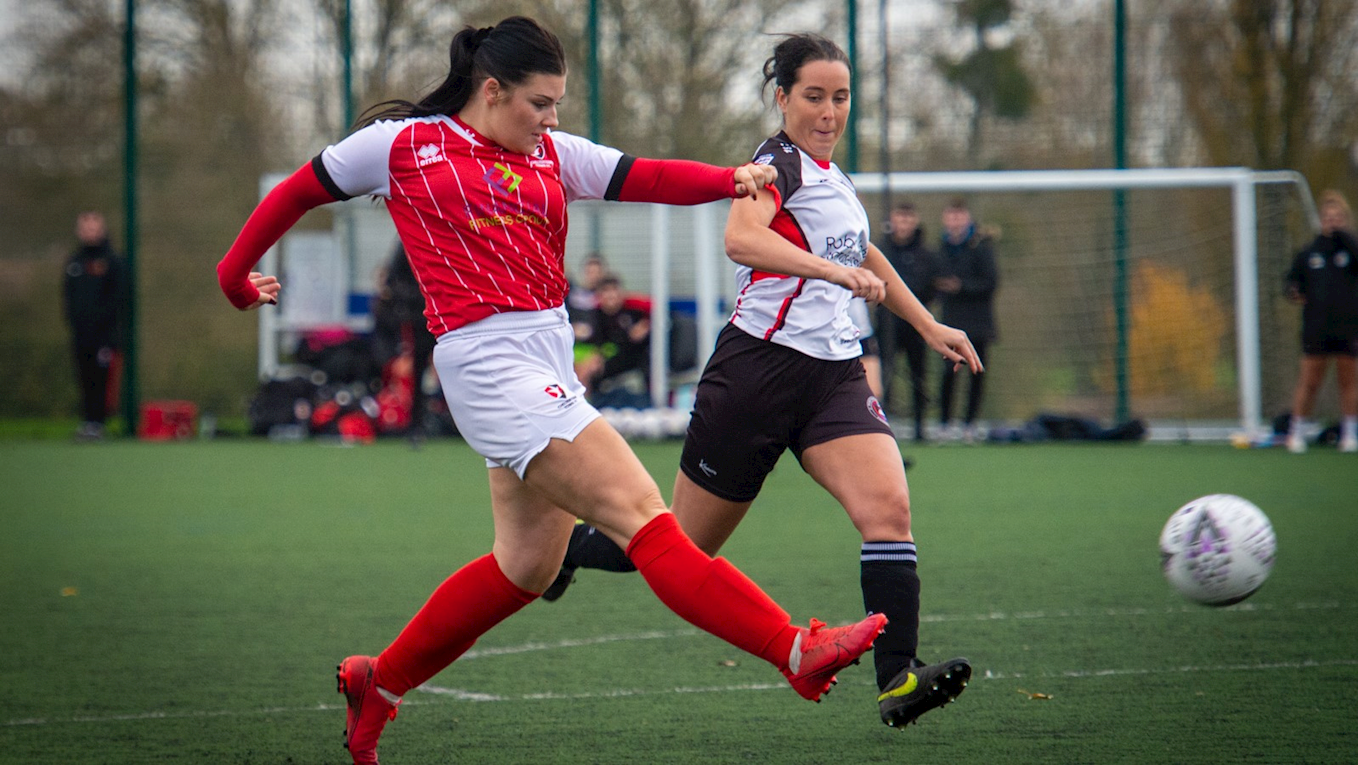 When asked about a fan criticism on social media in relation to lacking composure in the final third against Portsmouth, Grove was aware of the problem and is eager for herself and the rest of the team to put this right at the weekend.

Grove explained: “It’s definitely what we see as a team. I think in the final third we rush and don’t play as we do in the other two thirds of the pitch.

“But all we can do is just keep going. We realise it needs improving, and as a result we do a lot of training with finishing.

“And we just know that we need to relax in the final third at take the opportunities, so yes we are on it.”

In preparation for arguably the biggest game in the club’s history to date, the ex-Aston Villa striker gave us an insight into how this week has been different compared to any other regular week.

“I think it’s been normal in terms of we wanted to just train properly and give it all,” Grove explained.

“But it’s a bit different because everyone is fired up and even more ready to go, because it’s a second chance that we have been offered, so everyone wants to make the most out of it and give it their all.

“We did have ITV at training this week, which made it feel a lot more important so that was nice to see.”

We don’t know how long this unforgettable FA Cup will last for, but regardless of the outcome on the weekend, the Robinesses have made memories that no one will forget.

When asked about her favourite moment of this year’s cup run, the most recent game was the standout highlight for Grove.

The 20-year-old said: “I think as the games have progressed through the competitions; it’s been a lot more difficult each game we play. But my favourite moment- it’s a difficult one for me.

“Maybe the most recent game against Portsmouth. We put everything we had into that game, and I think everyone did everything they could.

“I know that Robyn Levett unfortunately got injured, but she and every player on our team was amazing for all the effort we put into that game.

“And even with the result at the end, everyone was proud despite the loss because we all came off that pitch knowing that we gave it our all.

“The Exeter game was a close second for me with the penalty shoot-out and the resilience to get through Exeter time after conceding so late in the second half.

“But the Portsmouth one just about edges it as it was against a side in the league above, and we took them to extra-time which was an incredible effort from everyone involved.”

Kick-off for this afternoon's match is at 2pm and you can watch it live online on this YouTube stream.