Cheltenham Town Ladies manager Tom Davies admitted that it was a ‘tough one to take’ after his side were defeated 2-1 (AET) against Gillingham Women in the third round of the FA Cup.

A goal in the second half of extra-time from Otesha Charles means it will be Gillingham who face Arsenal Women in the fourth round next weekend.

This defeat now ends the Robinesses season, and manager Davies was left deflated but proud of his side after the game.

He said: “It’s a tough one to take. Late goals in extra time are always going to be that way. It’s difficult for the team as well, they put everything into it. After last week’s disappointment, again they’ve gone into extra time and worked really, really hard.

“It’s about the performances and how we feel afterwards, and we put in a really strong performance against a strong side in the tier above, so we’ve got to take the positives from that.”

Taking two higher league opponents to extra-time for the second time this week has taken its toll on everyone at the club.

“It’s difficult for the staff too,” Davies joked. “I think my legs are gone just from standing.

“It’s on a bigger pitch as well and they worked really hard, we changed shape a couple of times. 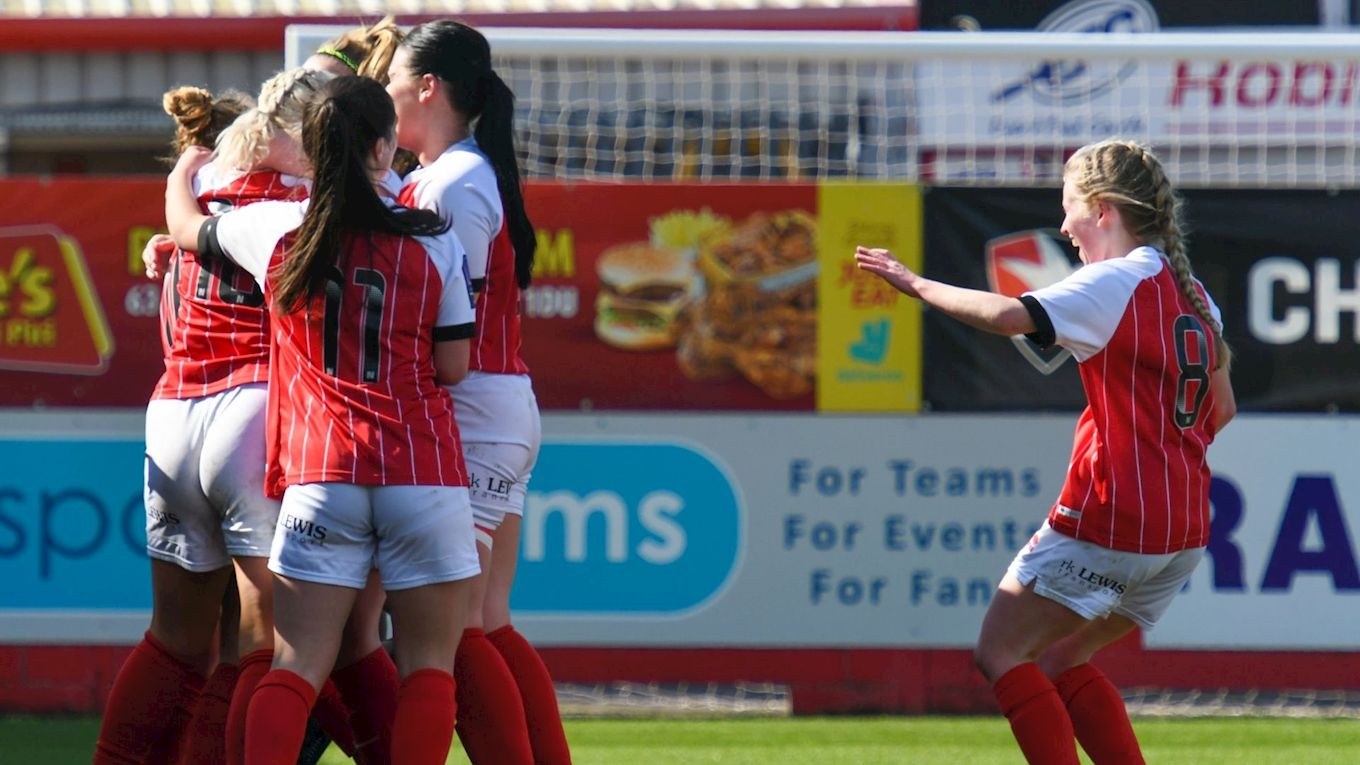 “Going from doing 120 minutes last week, to doing 120 minutes again and some players have played all the way through that, it’s really difficult, especially as we’re only two weeks back into training now, but it shows the professionalism of the players and the fact they’ve kept themselves ticking over.

“They’ve been doing the exercise plans and we’ve not taken any physical injuries due to the workload, which shows they’ve kept themselves ticking over.

“It’s testament to the players and the work rate that they’ve done during lockdown to prepare, and they’ve just missed out on that tiny bit of quality in the end.”

The work rate for the Robinesses had to be there from the start of the game with the visitors coming out of the traps fast early on at the Jonny-Rocks Stadium.

After weathering an early storm of Gillingham pressure, CTLFC took the impetus and from their first attack in the game in the seventh minute, had two shots blocked inside the box.

A key to taking the Portsmouth game into extra-time was the rock-solid performances of all defenders in the defence, and in the first half, you could tell they were all on it from the get-go.

Mai Butler, Billie Haynes and Sammy Hallsworth all making vital blocks and interceptions within the first 25 minutes of the game to prevent the away side notching an early lead here in Gloucestershire.

In fact, it was one of the defenders mentioned above who nearly nodded Cheltenham in front from a corner.

A beautiful delivery into the box was met by the head of Butler, but her goalbound effort was parried over the bar by Davies in the Gills goal.

An even contest looked to serve up a 0-0 scoreline going into the break, but two golden chances for the visitors nearly prevented this happening.

The first came in the 31st minute after a miscommunication at the back between Ripley and Butler from a free kick presented Grffin an open net to head into, but her effort went wide of the post.

The second came right before half-time in similar fashion from a set piece. This time, a Griffin free kick was hooked onto the bar by an unmarked Wills in the box.

Fortunately, the Robinesses survived and went into the break on even terms. Could they regroup again and cause the visitors a few more problems in the second half?

That’s exactly what they did, and even better, CTLFC managed to take the lead after Butler was able to keep alive a free-kick situation and lay it off to Billie Haynes whose cross was turned into the back of the next to make it 1-0.

Gillingham would draw level though with a long-range chipped effort from Keogh evading the reach of Ripley in the Cheltenham goal, as the visitors responded quickly after going behind.

Academy graduate Sophie Griffiths was brought into the fold before the 90 minutes was up.

Appearing from the bench for a televised FA Cup game at the Jonny-Rocks Stadium would have been an amazing experience for the young player like Sophie and all the other players in the team.

“It was absolutely amazing,” Griffiths said. “I mean look at it - it’s crazy standing on this pitch.

“Just to experience being on this pitch and playing at the stadium is something that you won’t always get the chance to do.

“So, I just feel really fortunate for having this opportunity to play on this pitch with this team.” 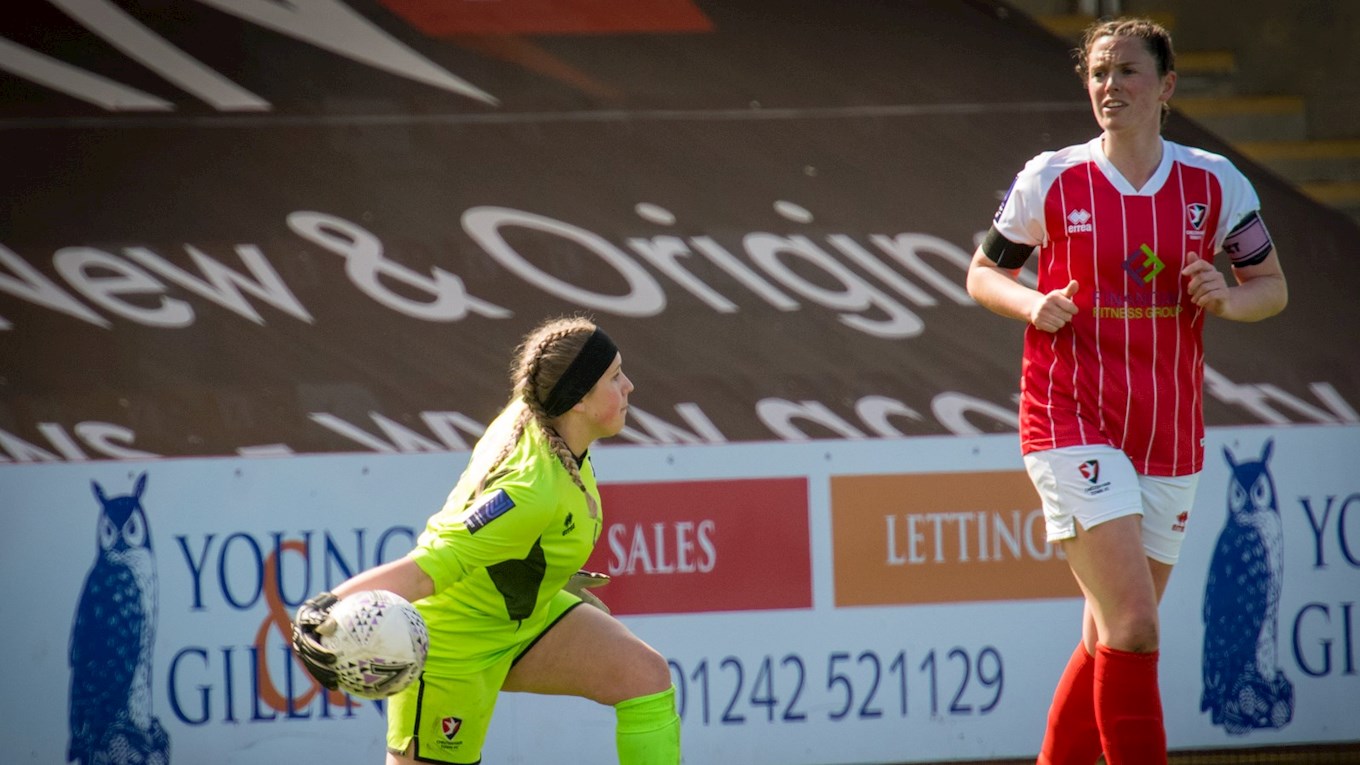 Extra-time loomed on the horizon yet again for the Robinesses and tiredness was going to be a factor that would inevitably affect the players going into an additional 30 minutes.

The visitors pounced on this and were able to nick a winner in the 111th minute, when Charles’ deflected effort bypassed Ripley in the Cheltenham goal at the near post.

Charles shined for the visitors and was a worthy match winner, securing her team's place in the next round against Arsenal, while for Cheltenham it'll be a case of regrouping and going again as preparations begin for next season.

Boss Davies said: “We’re going straight back into training, which feels horrible to say after they’ve done what they’ve done!

“We’ll go back into training next week, keep looking at ways to improve tactically and technically. Also, we’ll look at ways to keep bringing the group together, that’s really important.

“We’re going to keep going. It’s important we build off what we’ve done and keep moving in the right direction to give us the best possible platform when we come into pre-season and next season.

“I know there’s applications in terms of people moving up and people moving around so we’ll sit tight and wait and see what happens there.

“Our ambitions will be the same - we’re going to go into every game unified and make sure we improve our performances week in, week out and try and win every game.

“If we can do that, fantastic and if we don’t, we’ll keep learning.”

You can watch the game back if you missed it on our YouTube Live Stream, with commentary being provided by media assistant Eve Edmondson and Cheltenham Town Ladies defender Sam Morris.