Cheltenham Town bowed out of this season's FA Youth Cup at the second round stage after defeat by Exeter City.

The young Robins were edged out after an entertaining match that ebbed and flowed in testing conditions at St James Park.

Two fine goals by Callum Ebanks took the contest into extra time where the Devon side eked out the decisive moment to progress to the third round.

"The lads deserve a lot of credit for the character they've shown tonight," said the Under-18s manager Pete Haynes.

"We came with a certain game plan but conditions meant we had to adapt and the players deserve praise for the way they went about it.

"The desire and attitude when we went behind to get back into the game was great, and they're the fundamentals that any footballer needs.

"Credit to Exeter City, and we wish them well in the next round."

Haynes' side acquitted themselves well in horrendous weather, starting with far more purpose than they did in the hard-fought first round win against Tuffley Rovers.

What a couple of days Ebanks has had. He had made his full debut in the Papa Johns Trophy tie against Norwich City at the Jonny-Rocks Stadium 24 hours earlier and here he opened the scoring inside two minutes with a fine finish.

But the home side responded well and struck the woodwork moments before Sonny Cox met Ellis Johnson's cross from the left with a firm header to get back on terms.

Cox called Jake Parsisson into a low save on the half-hour while Felix Miles tested Jack Arthur, the Grecians' number one, with a dipping free-kick with half-time approaching.

Miles produced the first meaningful chance of the second period on the hour when he turned his marker and shot from distance, drawing a smart stop by Arthur. Ebanks then volleyed over from 20 yards and went on to have a decent shout for a penalty, but the referee waved away his strong claims.

At the other end there was a great chance for Nelson Iseguan with 18 minutes remaining, racing onto a diagonal ball by Michael Lilley but the pacey striker headed wide under pressure from Will Ramsey.

Exeter restored their lead 16 minutes from time through a wonderful strike by Cox from 25 yards, beating Parsisson flying to his right.

But Ebanks notched his second of the night four minutes from time, forcing it home though a crowded penalty area after a Joe Hunt corner from the left. 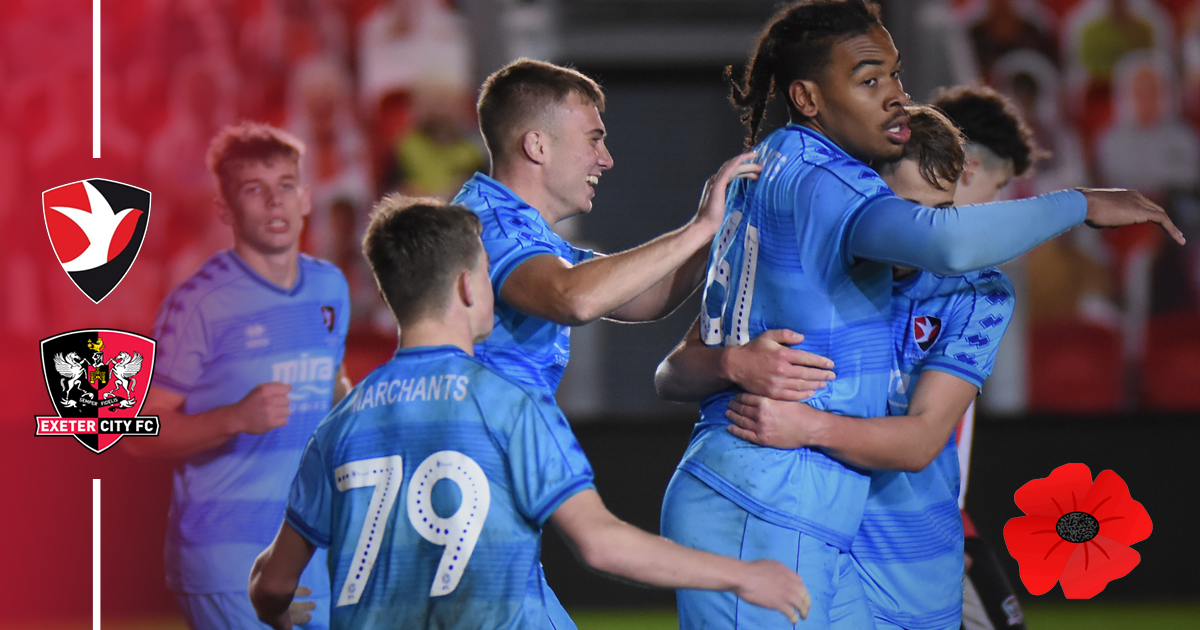 Extra time followed despite a golden opportunity for Joe Wragg on the stroke of time, dragging across goal and inches wide. The substitute miscued an effort in the opening exchanges of extra time and it dropped over the bar with Parsisson wrong footed.

Then Arthur denied Ebanks with a decent save and Iseguan was a whisker away from adding Exeter's third as the game opened up.

The hosts won it two minutes before the half-way point of extra time when Ellis Johnson picked up play on the edge of the Robins' box and drilled it past Parsisson.

The Robins rallied late and substitute Rio Spencer came close to taking the game to penalties with a 20 yarder, but Arthur turned it around the post. Liam Atwell, another replacement, also tested Arthur from a tight angle but the Exeter number one was equal to it.