Cheltenham Town's new online series, The Boot Zoom, looking back at some of the most memorable matches in the club's history with those who took part in them features Bob Bloomer, Steve Book and Jason Eaton in the latest episode 22 years to the day since the Robins won the FA Trophy at Wembley.

The trio join the Gloucestershire Echo's Jon Palmer for a fascinating chat recalling some of their memories from the 1997/98 season which ended in Trophy winning glory under manager Steve Cotterill at the world famous venue.

Watch on above as they describe the journey through the season and competition, as after a two-legged semi-final win over Dover Athletic, they clinched a place in the prestigious final to take on Southport.

It was one of the first major title successes for the club and was a part of the magnificent journey that saw Cotterill lead the Robins through the divisions to the Football League a year later.

Remembering that famous day at Wembley

The whole town was gripped by football fever like never before as the Robins reached their first major final.

Victories over Enfield, Rushden & Diamonds, Ashton United, Hayes and Dover Athletic took Steve Cotterill’s side to Wembley for the climax of what was already the finest season in the club’s history.

The build-up to the big occasion created a buzz around the town with tickets selling like hotcakes and interest spreading across the whole of Gloucestershire.

Cotterill, the home-grown hero who had masterminded Cheltenham’s remarkable transformation, was only 33 years and 10 months, making him one of the youngest managers ever to lead a side out at the home of football.

The match was refereed by Gary Willard, who walked off the pitch for four minutes in the Premiership match between Barnsley and Liverpool at Oakwell earlier that season.

The teams were presented to guest of honour World Cup hero Roger Hunt, just 24 hours after the FA Cup final when Arsenal defeated Newcastle United 2-0 as Arsene Wenger became the first foreign manager to win the double at the end of his second season in charge of the Gunners.

After all the hype, the day of the game finally arrived and in true cup final tradition, it was gloriously sunny weather.

The match itself was by no means a classic, but it was nonetheless a memorable day for the 18,000 or so Robins fans who made the trip to north west London, leaving Cheltenham like a ghost town. 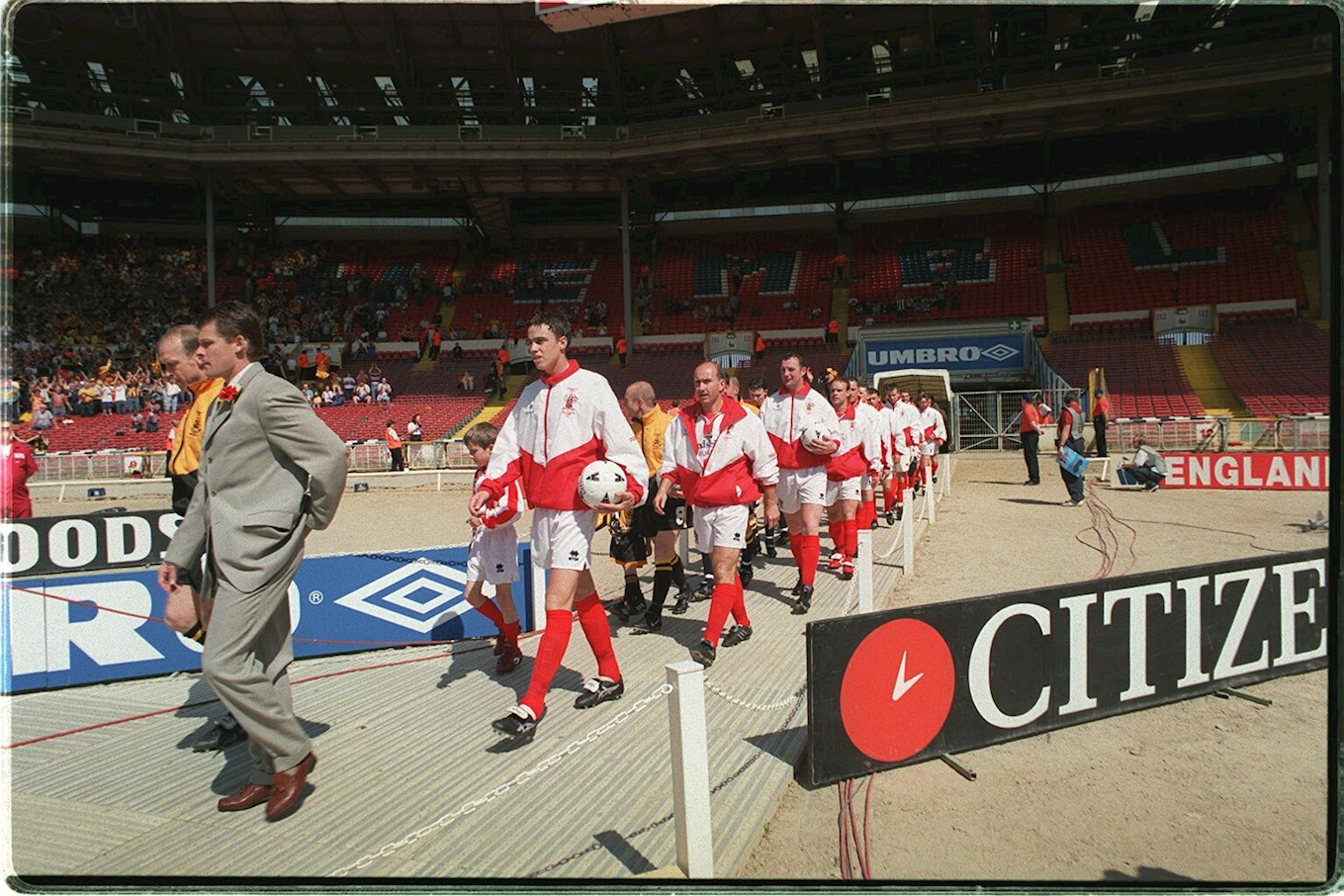 Southport had overcame Slough Town in the semi-finals, 2-1 on aggregate.

The Sandgrounders finished 16th in the Conference and 28 points behind runners-up Cheltenham and began the final as firm underdogs.

Big match nerves appeared to have affected some of the players and there were uncharacteristic mistakes aplenty.

Brian Ross wasted a chance for Southport in the 63rd minute, when he evaded the challenge of Mark Freeman and was faced with only Book to beat.

Book did well to make himself big and gave Ross very little of the goal to aim for and the chance was gone.

Book capped a fine first season with an outstanding display on the big stage. 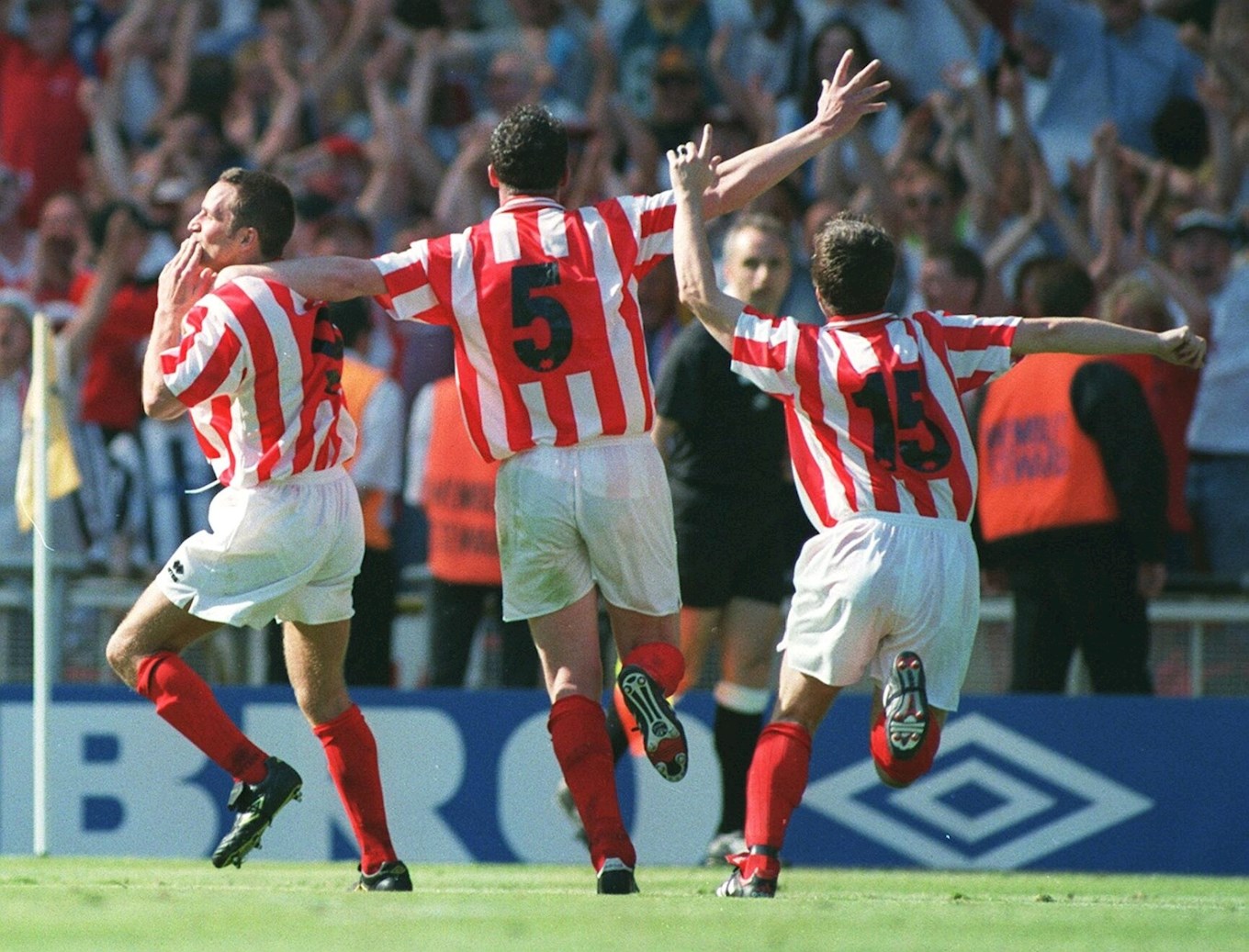 With 11 minutes to go, Cheltenham made the breakthrough and two substitutes were involved in the lead up to the goal.

First Jimmy Smith, who had replaced Keith Knight, teased Ged Kielty on the right wing and after some fancy footwork, the diminutive Scot was fouled by the Southport defender.

Russell Milton, on in place of Walker, floated in one of his trademark free-kicks, which was flicked on by Jamie Victory for Jason Eaton to head the ball past Billy Stewart and into the back of the net to send the Robins fans wild.

Skipper Chris Banks climbed the 39 steps to collect the Trophy and the unprecedented celebrations began.

Craig Armstrong, Steve Guinan and John Finnigan look back on the 2005/06 promotion season