Chairman Arthur Hayward was pacing around Pittville Park as a penalty from Brian Hughes took Cheltenham Town into the top level of non-league football.

The Robins were led into a national division for the first time in their history by 29-year-old manager John Murphy.

Their main challengers for the Southern League Premier Division title were King’s Lynn and Crawley Town.

After a glorious Mark Boyland hat-trick fired Murphy’s men to a 3-2 win over rivals Gloucester City, helping to send the Tigers down, Cheltenham went into the final day needing to beat Alvechurch to secure promotion.

Several members of the squad were carrying injuries, but they completed the job with a 2-1 victory thanks to Boyland’s opener and Player of the Year Hughes’ penalty.

The afternoon of May 4, 1985 was so tense that Hayward was unable to watch and as the all-important spot kick was converted he had left Whaddon Road.

“I’ll swear Brian Hughes’ knees were knocking when he walked up to take it,” Murphy said.

Hughes and Boyland scored 58 goals between them in all competitions during a campaign that also saw Cheltenham reach the final of the Southern League Cup, where they were defeated over two legs by Fisher Athletic.

Nick Jordan and Steve Abbley were the wide men, with Hughes joined in the centre of midfield by the ultra-competitive Ray Baverstock.

The regular back four consisted of skipper Paul Collicutt at centre-half next to Stuart Cornes, with Clive Boxall and Steve Scarrott the full-backs, in front of goalkeeper Dave Moss.

Welsh “revelation” and Smiths Industries employee Neil Goff also played an important role in midfield, even if he did miss the Gloucester clash at Horton Road due to turning up at Whaddon Road and not having any transport to carry him to the other end of the Golden Valley.

“We had a group of ambitious players all desperately keen to play for the club,” said Murphy, who is now on the board of directors at Whaddon Road.

“Most of them are household names for Cheltenham fans, 35 years on.

“You could never achieve anything unless you had almost the whole squad pulling in the right direction and we had a great group of characters who were together on and off the pitch.” 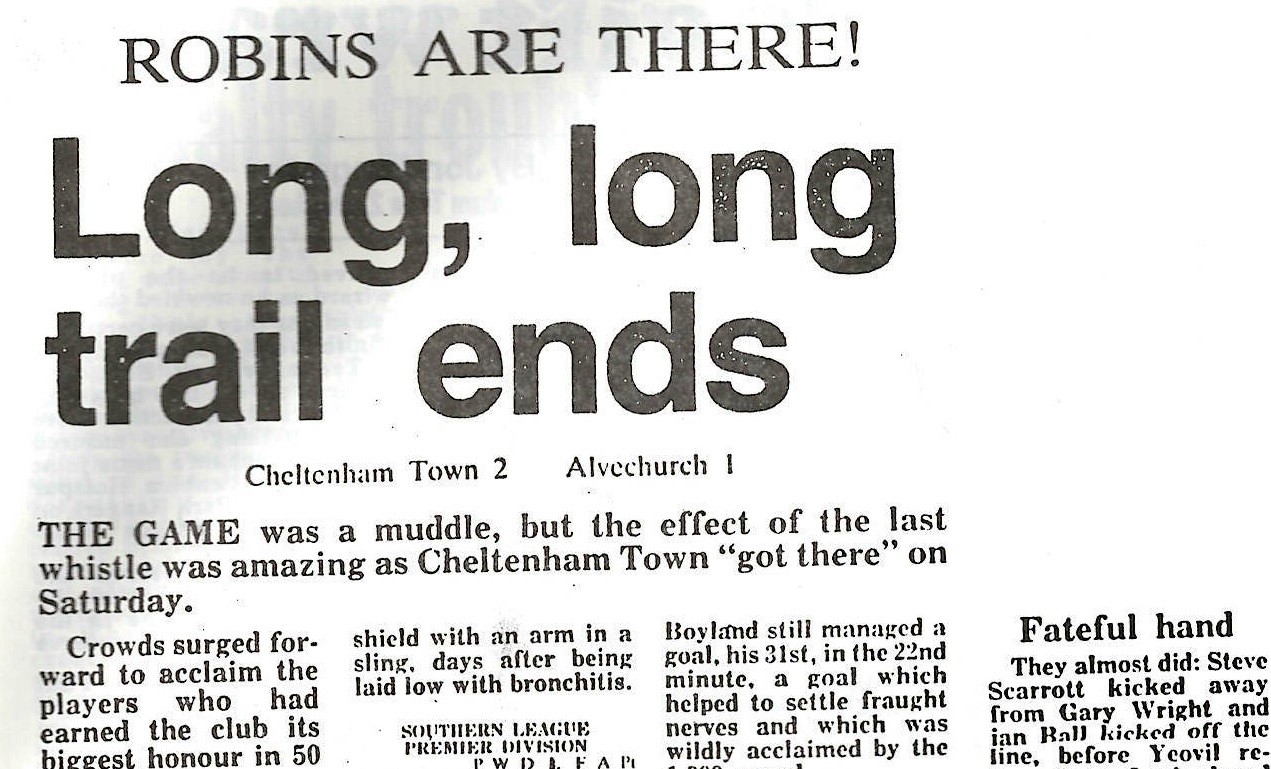 Cheltenham had won the Southern League Midland Division title at the first attempt in 1982/83 under boss Alan Wood.

Murphy took over and in the summer of 1984, he brought in Boyland from Banbury United and former Swindon Town man Hughes from Torquay United.

“Five or six had been at Swindon and their professionalism ebbed onto those who hadn’t been full-time,” Murphy said.

“Quite a few wanted that chance in the pro game and we could give them the opportunity to make a step up.

“Baverstock would run through a brick wall for you, while Boyland was a class above and should have been a professional footballer.”

Murphy took on the role of manager at the age of 29, assisted by record scorer Dave Lewis and all-time leading appearance maker Roger Thorndale.

He had to combine running a team trying to win promotion with a demanding job at GCHQ and a young family.

“I am pleased with the career I had, but it was nowhere what it should have been due to football,” he said.

“But I would never change that because I made lifelong friends, many of whom I still speak to now on a weekly basis.

“I’d often go to the ground early and do an hour’s work before heading to GCHQ.

“Then I’d return to the ground at lunchtime, go back to work and then drive to somewhere like Altrincham in the evening to watch a game because there was no scouting system then.

Having been a team mate of many of his players, Murphy needed to exert his authority after becoming manager as he reluctantly reduced his own playing time to focus on leading.

“I was strong-willed and I was a bit of a tea cup thrower in those days, shouting and bawling because defeat and me didn’t get on,” he said.

“I remember after one bad result saying to the players ‘you got Alan Wood the sack, but you don’t do the same to me, so decide if you want to be here or not’.

“I knew the players so well and there was a level of mirth and enjoyment, but we always knew when we had to get down to business.

“The focus was on physical fitness, desire and attitude.

“They gave me a level of respect and knew where I was coming from, even if once I remember Steve Abbley telling me my team talks were too long!”

Due to their knockout competition exploits and some poor weather, Cheltenham were left with a backlog of fixtures, but Murphy was always confident they would pull through in the final weeks.

“There were no times when I didn’t think we’d be in the frame, even though I knew King’s Lynn were a good side,” Murphy said.

“Boyland scored a screamer in a 1-0 win at Alvechurch (on April 10) and I was confident we’d do it then.

“On the final day, myself and the Alvechurch manager were at loggerheads for 90 minutes and I was very argumentative then.

“I knew our quality would shine through and we got the penalty, which he maintained shouldn’t have been given.

“That was the start of something for the club because we were now going in with the big boys.”

Collicutt, with whom Murphy had attended Cleeve School, dislocated his shoulder during the Alvechurch game.

He went to hospital to have it put back in place before returning to lift the shield, complete with sling.

As the players celebrated, Murphy had agreed two new signings by 7pm that evening.

“On reflection, I turned the players around too quickly but it was down to my desire to push, push, push,” he said.

“I was pleased the group had something to show for their efforts, but straight away I was thinking about what was on the horizon, so the celebrations were somewhat muted.

“I was so pleased for Arthur and the board because at Cheltenham we are always trying to punch above our weight and we never had any serious money.” 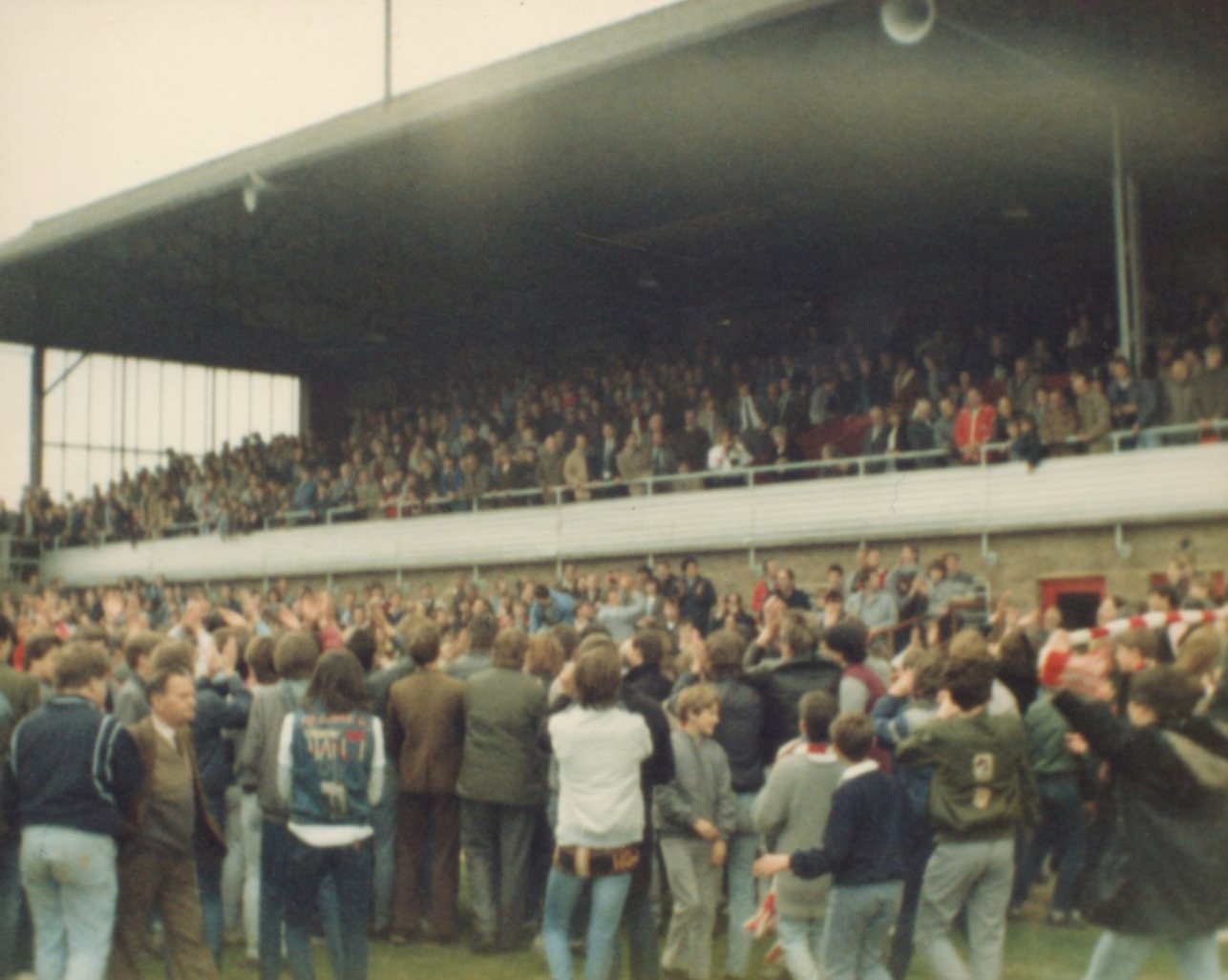 Murphy and his squad did go on a post-season trip to the Belgian city of Ostend to toast their historic achievement.

“We had to be careful because it was not long after the Heysel Stadium disaster and we weren’t sure what sort of reception we’d get as an English team,” Murphy said.

“I remember the Telegraph phoning me about that, but we managed to enjoy the trip and the celebrations.

“It was a terrifically strong social group, who enjoyed each other’s company.

“Looking back, they liked a drink and maybe you could say that was unprofessional, but it was part and parcel of the culture of football.

“We had things in harmony on and off the pitch and our quality of football was never in question.”

Murphy and his wife Jean now cover the main reception at Whaddon Road before home games and if any of the players who were part of the 1984/85 squad pop in, there is always a warm smile.

“We’ve had a lot of the lads back as guests in recent seasons and because we achieved something together, it’ll always be special,” he said.

“I’ll always remember what those players did for the club and we’ve all remained close friends to this day.”

Tonight at 7pm visit the club website to watch our finale to our Champions Weekend as John Murphy, Paul Collicutt and Mark Boyland take part in a Zoom group chat to recall their memories of the 1985 title exactly 35 years on.

Watch the 1999 Conference title winners Zoom group chat online. Keith Knight, Michael Duff and Dave Norton look back on that success in getting promoted to the Football League for the first time.