Keith Knight had people knocking on his front door after he set up the goal that took Cheltenham Town into the Football League.

They simply wanted to congratulate him on the achievement, as one of the few local lads who helped Cheltenham-born manager Steve Cotterill lift the club into the full-time ranks for the first time.

“The phone hasn’t stopped either,” Knight told the Gloucestershire Echo.

The winger made eight Conference starts, along with 15 substitute appearances, scoring the only goal of the game in the top-of-the-table clash with Rushden & Diamonds at Whaddon Road on November 28.

He also netted to earn a point at Barrow on March 6, when Mark Freeman was sent off.

But Knight guaranteed his place in Robins’ folklore by setting up Duff’s historic moment.

“If I had not gone on from the bench, we wouldn’t have won the game,” Knight said.

“They were the happiest two years of my football career, with the FA Trophy win the previous season.

“That was the best side Cheltenham had ever had and the dressing room was on a par with anything I’d known.

“What we did was beyond our wildest dreams. We sat down at the beginning and said we had a chance to win it because we had a stronger squad and with additions it could be stronger.

“The important thing was to consolidate because we didn’t want to be a one-season wonder.” 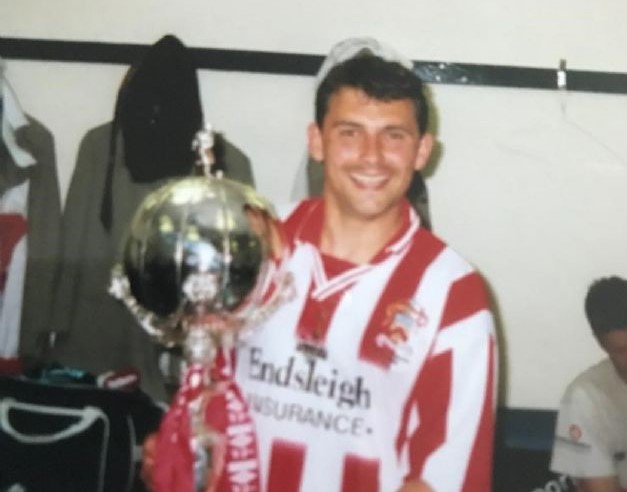 After an earlier spell with his hometown club, Knight played 50 games for Reading before joining Veendam in the Dutch League.

Job and family commitments prevented him returning to the full-time game with Cheltenham and he joined Worcester City ahead of the 1999/00 campaign.

While Knight had experienced professional football before, Duff’s rise through the divisions was only just beginning.

The club’s greatest youth product, who returned to manage them in September 2018, was 21 when he scored the most significant goal of a career that saw him win promotion to the Premier League three times with Burnley.

“I wasn’t even going to go up for the free-kick and the only reason I did was because Bob Bloomer told me to go and get my head on it,” he said.

“I didn’t know where the ball was at first. I just knew I had headed something.

“When I saw it hit the net I couldn’t tell you where I went. I just remember a pile of bodies on top of me.”

Right-back Duff set up Neil Grayson’s headed goal that night and he also provided the assist for Mark Freeman’s equaliser at Rushden earlier in the same month as Cheltenham scored twice in the final seconds to claim a famous 2-1 victory.

“The corner was going to be played short and I normally would have left it for Russell Milton, who was running over,” Duff said.

“But I thought hell, there’s only a minute or so to go so I went for it and delivered the cross and Boka got on the end of it.

“That was the game that changed it, as everyone knows.

“I feel I did all right that season and was more consistent than I had been the previous year.” 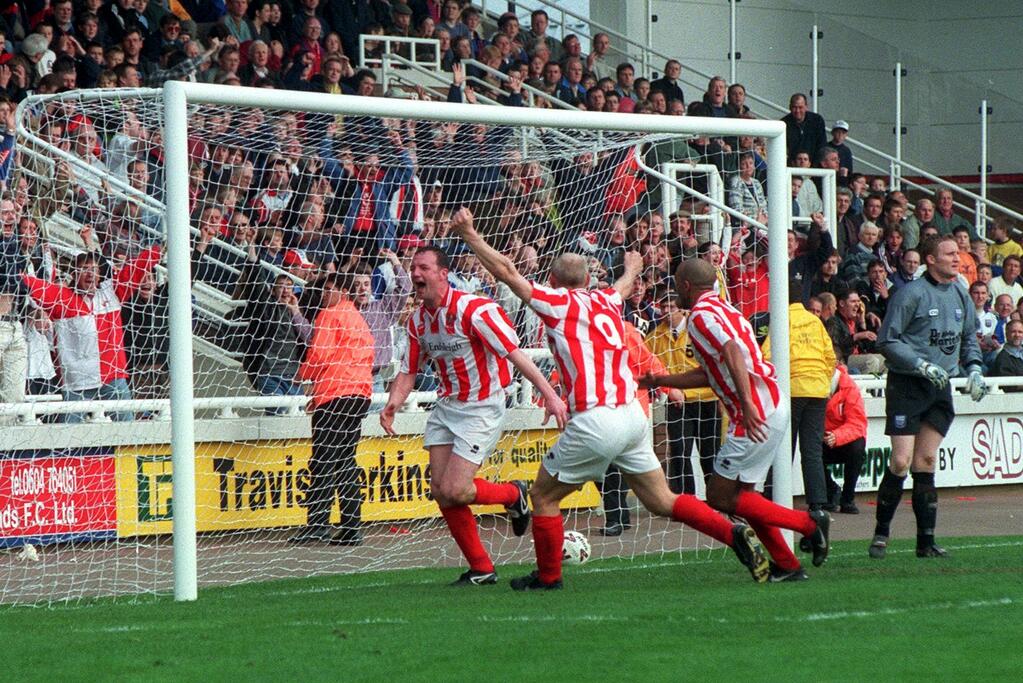 Duff had suffered setbacks at Nottingham Forest, Darlington and Swindon Town before making it at Cheltenham and Liverpool were among the clubs to watch him in 1998/99.

“By the time I broke through at Cheltenham I was 6ft 2in and probably 11 and a half stone.

“I didn’t have the same problem most of the other players had. They were all trying to lose weight, while I was trying to put it on.”

One of the summer signings made by Cotterill after the 1998 Trophy triumph was midfielder David Norton.

He became the third of the ‘Hereford Four’ after Neil Grayson and John Brough, with Richard Walker still to come.

While Knight knew he wouldn’t be going into the Football League with Cheltenham, Norton had an extremely difficult decision to make.

The 34-year-old could not play in the Football League again due to an insurance pay-out when he retired from the full-time game through injury.

He was offered a coaching role by Cotterill, but in the end decided to continue playing and switched to Yeovil Town.

“What Steve Cotterill and Cheltenham Town have done has put back into me the desire to play football,” he told the Echo.

“I’ve always had a love and passion for the game, but I thought I might never play again after the operation I had the previous season.

“I’ve always wanted to play the highest standard I can, but whether there are 10,000 people watching or 10, you still get that buzz.”

Watch our Champions Weekend preview taking a look at all three of our 1985, 1999 and 2016 title victories 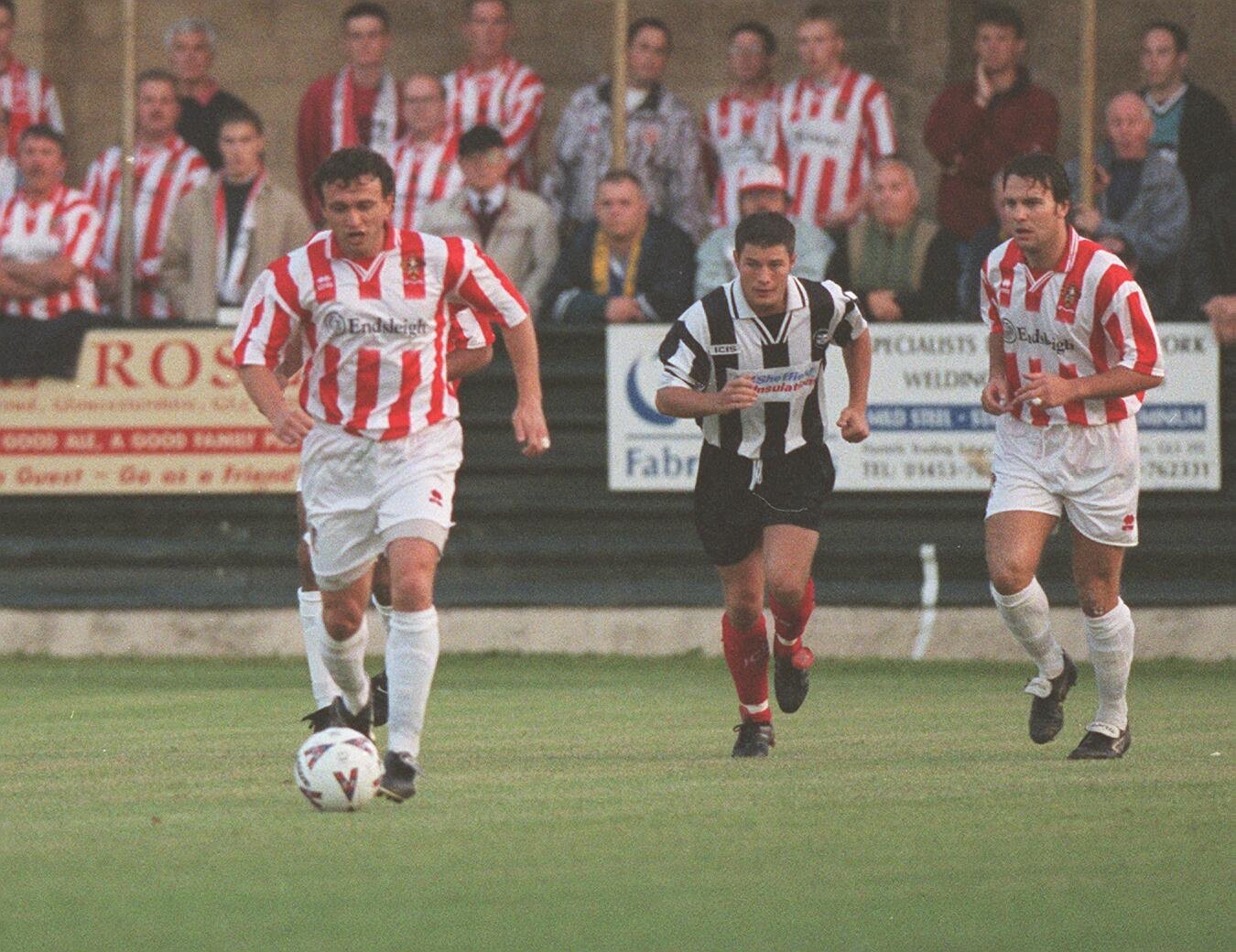 Norton, who had been relegated from the League at Hereford in 1997, travelled from his home in Nottingham for training twice and week that season, establishing himself as a vital member of the team.

“I added a bit of experience in the middle of the park and in the early part of the season Lee Howells and I were playing quite well,” he said. “And with Clive Walker just in front of us, it gave us more attacking options.

“It was a long and hard season and my biggest problem was dealing with the late nights and early mornings.

“I ended up rearranging my work around football and it was all worth it. It was the first time I won a championship and I’d never known anything like it.”