Paul Collicutt needed assistance to lift the Southern League championship shield after Cheltenham Town’s 2-1 home win over Alvechurch secured the title on May 4, 1985.

The Robins’ skipper would normally have made light work of the giant memento, but on this occasion he only had the use of one arm.

Nobody could deny he enjoyed his moment to savour at Whaddon Road, considering what he had gone through during the final weeks of the campaign.

Cheltenham were forced to play eight games in 14 days due to a fixture backlog caused by their exploits in the Southern League Cup.

They lost the final over two legs to Fisher Athletic, but they achieved their primary goal of top spot in the Premier Division, earning a first promotion to what was then known as the Gola League.

“I ended up in hospital,” he said. “Stuart Cornes, my centre-back partner, was taken out by an elbow and cut his head open.

“I decided to go in hard on the lad that did it and he fell on top of me and I put my shoulder out.

“I’d dislocated it at Windsor & Eton in the FA Cup the previous season and it went again.

“I ended up at hospital in Birmingham, but I remember watching the end of the game and Steve Cotterill filling in at centre-back because we’d lost two of our back four.”

After being patched up, Collicutt battled on as Cheltenham approached their heavily congested schedule, helping them to RS Southampton and his old club Trowbridge Town.

He was then struck down with tonsillitis, causing him to miss a thrilling 3-2 derby victory over Gloucester City, with Boyland scoring a hat-trick at Horton Road.

“I remember being in bed and listening on the radio, but I had a temperature and was as white as a sheet,” he said.

“I felt so weak and unusually for me I had to take a couple of days off work sick too.

“We had Fisher at home the next day and I missed that one too, leaving us with Alvechurch at home in the decider on the last day.”

Collicutt was far from 100 per cent, but he declared himself fit for selection after a lengthy discussion with manager John Murphy.

“That last week was horrendous and I hadn’t trained, but I was desperate to play because everyone knew what a big game it was and it really brought the town alive,” he said.

“Anybody and everybody was talking about it and there was a big crowd, which seemed a lot more than the official figure of 1,999 to me.

“All the players’ families were there too as we tried to finish off the job.”

Collicutt duly reclaimed his starting place in defence, but after around half an hour he dislocated his shoulder again.

“I rushed off to hospital in a taxi with my mum because my dad refused to leave the ground, he was that engrossed in the match!” he said.

“I was X-rayed and if I remember correctly, it was Bert Williams our trainer who actually popped it back in.

“I rushed back to the ground, still in my kit, with my arm in a sling and I can remember catching the last few minutes of the game.”

Goals from Boyland and Brian Hughes, from the penalty spot, sealed a 2-1 victory as Cheltenham made history by securing promotion to a national division for the first time in their 98-year history.

“We were on our knees by the end of that season, but we did it and I remember it being a relief,” Collicutt said.

“It was a phenomenal achievement considering the number of games we had to fit in just to get the Alvechurch game in that position.

“The camaraderie was tip top and that got us through a few sticky spells we had earlier in the season.

“I needed help lifting that shield because physically I just couldn’t do it, but I remember going up into the main stand and the crowd piling onto the pitch.” 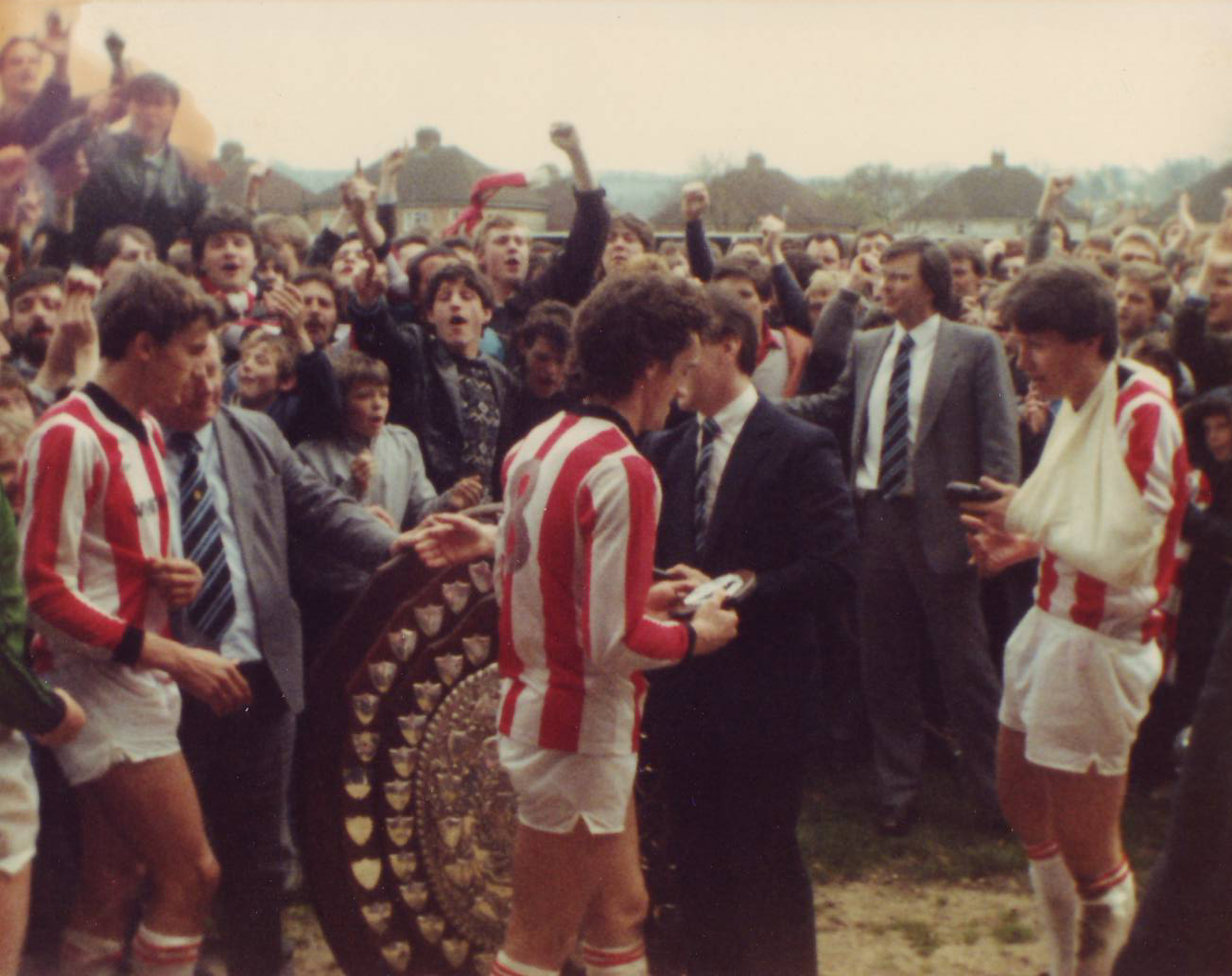 Boyland’s final day strike took his tally for the season to 31 and the front man’s goalscoring achievements earned his skipper a small cash bonus along with his champions’ medal.

“I remember chatting to one of the directors Dave Hudd in the bar one night,” Collicutt said.

“We had a lot of social drinking in those days, especially after games.

“I told Dave that Boylo would hit 30 goals, but he wouldn’t have it, so we made a little bet and I won a few quid.”

Attacking midfielder Hughes contributed 26 goals and was named Supporters’ Player of the Year.

“It was Hughesey’s best ever season without doubt and he had a knack of ghosting in and snatching winners from nowhere,” Collicutt said.

The squad were promised a week away to mark their achievements, but in the end they had to settle for a weekend in the Belgian city of Ostend.

“We had a good laugh and most of the lads went,” Collicutt said.

“I have some good memories that I’ll take to the grave from that trip and from that season.

“We had good times on and off the pitch, with quite a few locally-based lads and in terms of the spirit within the side, you’d struggle to find anything better than that.”

Visit the club website at 7pm this evening to watch a special Zoom chat with Paul, John Murphy and Mark Boyland revisiting their 1985 title success.

Watch the champions of 1999, including Keith Knight, Dave Norton and Michael Duff looking back on that title victory from their Zoom group chat for Champions Weekend.

Take a look back at the players from our 2016 title celebrating our most recent league win. Kyle Storer, Daniel Parslow, Dan Holman and Danny Wright grouped together to revisit the National League title success.