Owen Evans has already raced to ten appearances as a Cheltenham Town player since his mid-January loan signing from Wigan Athletic.

The 23-year-old arrived at the club from the Championship outfit to replace injured goalkeeper Scott Flinders on an agreement until the end of the season having spent the first half of the campaign at Macclesfield Town.

It's the sixth loan spell of his career as he aims to help Cheltenham push for promotion into League One for the third time in the club's history.

Having enjoyed the first few weeks of his time as a Robins player, the shot-stopper sat down to look back on his first six weeks in Gloucestershire, how he almost joined the club as a teenager, his time in the Wales set-up and the benefits of time spent out on loan while trying to get game time as a goalkeeper.

What has impressed you so far of what you’ve seen of Cheltenham Town?

Everything really. The lads have been quality on and off the field – the staff, management, I can’t complain about anything really.

How quickly have you learnt the style of play?

Fairly quickly I like to think. It suits me with the way I like to play with the ball at my feet. The lads quality helps me tremendously and I think it’s starting to come together game by game.

Has your ability with the ball at your feet helped to develop the team a bit more since they can use you in that sort of way?

Possibly. I’m a different type of ‘keeper to Scotty. You can see why he’s loved by all the staff and players. He’s a great lad and a great ‘keeper as well. I am comfortable with my feet, and the lads may look to pass back to me and try different angles to try and get out.

The recent matches against Carlisle United and Leyton Orient were played in the rain and in a swirling wind. What has that been like to play in as a goalkeeper?

It is not ideal at all. I’d rather it be freezing cold than a blistering wind. At Carlisle I thought I dealt quite well with it and obviously got the win and the clean sheet. Against Leyton Orient not so well for obvious reasons but that’s the way it goes sometimes. The lads did well, dug in, and got the win on both occasions so I can’t really complain in terms of that. It’s difficult for ‘keepers to get any flow into the game in terms of distribution and dealing with shots means it can complicate the easiest of shots.

You’ve been playing in League Two week in week out this season. Is it a different pressure playing for a team towards the top of the table compared to Macclesfield given the other pressures that they have?

Of course both have got their pressures. Coming in here to Cheltenham we’re working hard to try and get the points and keep the pressure on the top three. I feel like we can push for top three rather than settle for play-offs. That is the general feeling around the place and I think it’s possible so we need to get as many points as possible throughout the remaining games.

Not many people will know but when you were a youngster you spent a bit of time training here at Cheltenham?

When I was an under-16 at Hereford United they had money problems there which meant it didn’t look like they were going to offer scholars so I came to Cheltenham for two or three months to train. I trained at Hartpury and it was a good experience. I enjoyed it but Hereford then turned out to have a scholarship programme so I ended up getting a scholar there so that’s why I was away from Cheltenham. It could have been a different story.

You eventually moved to Wigan Athletic. How did that come about from being at Hereford United?

The goalkeeper coach at Hereford United when I was an under-15 and under-16 got a job at Wigan. When I was a first year scholar Hereford had money problems and they disbanded the youth team after one year. Lads weren’t getting paid and it was poor conditions. I asked him if he knew anywhere and he said to come to Wigan and I’ll get you a trial. I impressed and managed to get a second year scholar and continued on from there.

What happened at Hereford United was terrible for the club but was it one of those strange circumstances where for an individual like yourself it ended up being a new avenue that’s worked out well?

Yeah exactly. They call it silver linings but I think I would’ve been happy to be at Hereford but then I saw the opportunity to push for a Championship club and I worked hard every time I was in training there and it has continued to pay off. I’ve just got to continue to work hard and be grateful that I have had that opportunity to be up there. 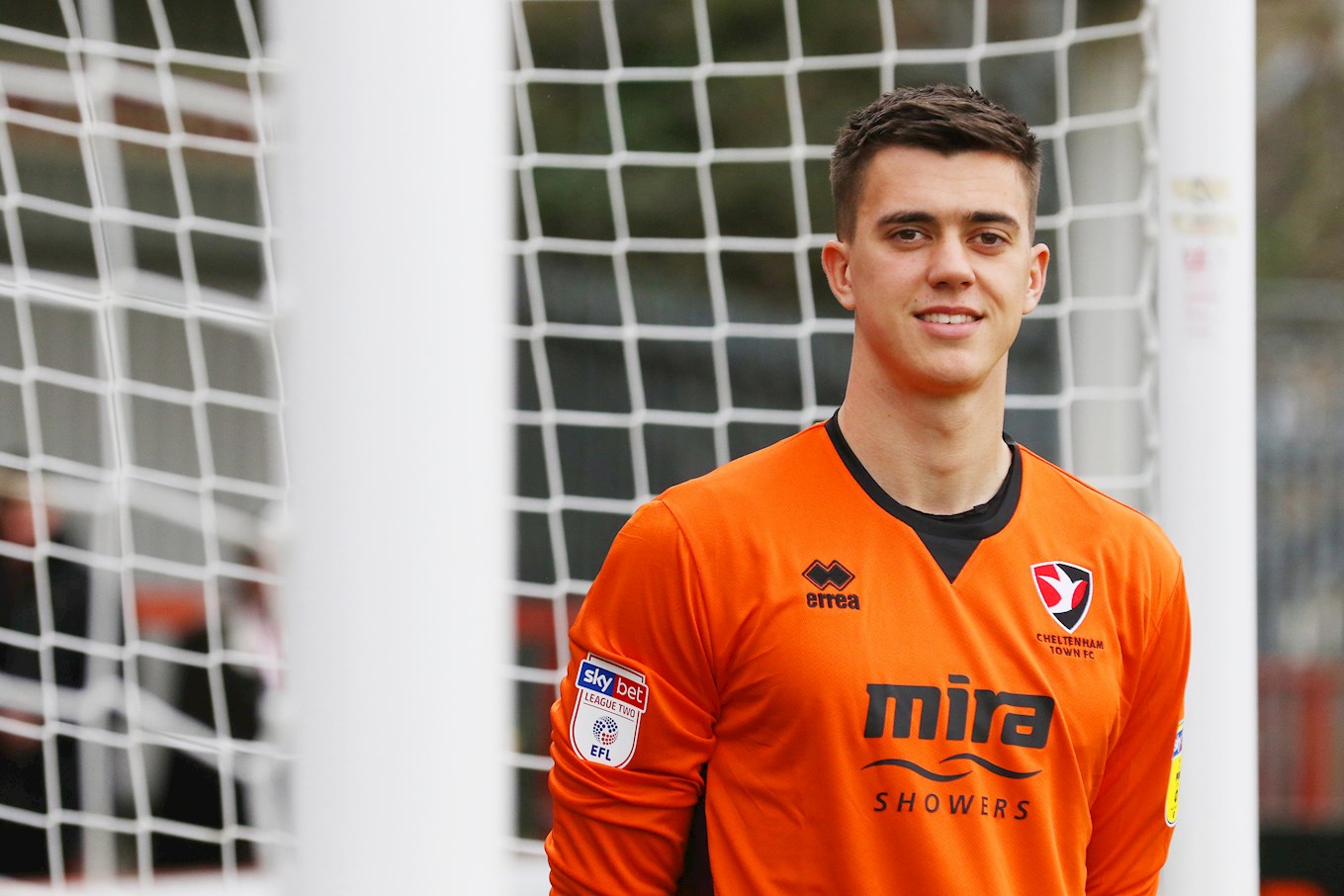 The big thing for young goalkeepers is going out and getting games on loan. Witton Albion, Rhyl, North Ferriby United and Sutton United have all been clubs you’ve played for in non-league. Have they all been crucial learning experiences given they’re all different clubs to one another?

I learnt different things at every different club. Some of them were longer than others for different reasons. I was at Rhyl the longest I think in terms of the amount of games I played. It is the best way for young ‘keepers to learn, to get into men’s football as soon as possible and dealing with the pressures. That’s what goalkeeping is, dealing with and performing under pressure, and hopefully winning points for your team.

Do you feel like you’ve now got a lot of playing experience under your belt?

I’ve been lucky. Wigan have pushed me to get as many games as possible. They see potential in terms of I could be a League goalkeeper which I am aiming for. Whatever league that might be I want to be as high as possible. You can only reach so much in terms of under-23s games. They do serve a purpose, they are beneficial, but it gets to a point where you have to get as many men’s football games under your belt. It has been fairly spread out but I think I’ve managed to accumulate a few amount of games now. Hopefully at the end of this season I should have hopefully 50 League games under my belt which will be really good going into the summer.

You’ve got international experience with the Wales under-21s. How have you found representing your country?

I had my first call up for the under-21s and it had been a while since I’d had the under-19s call up so I was wondering whether a call would come again. When it did come I was over the moon and every training camp and every trip we did I was just happy to be there with some great young footballers with a few who have gone into the first team and play regularly in the first team for Wales – it’s been great to see them doing so well. It has been an honour and to get two or three caps at the end of the campaign was an honour and I was really pleased to be involved.

How does it work with the Wales set-up in terms of them knowing that players like yourself are out there and available?

Have you trained with Ryan Giggs’ senior squad as well?

Yes I had a training camp in the summer in Portugal before they had their qualifiers. It was a great five or six days out there and a real honour to be involved with some of the big names. Hopefully I can get there again soon.

By playing games hopefully you’ll get those opportunities again but especially in tournament football there’s always the chance to be even a second or third choice?

I’m taking it game by game. I want to do well every single game I play – especially at Cheltenham now. If that opportunity comes along whether it’s to be fourth choice and train or try to get involved a bit more I’ll be happy if that call comes. I’m just trying to perform well as much as possible and hopefully try and earn my way in.

It’s a big end to the season. The crowds are building at the Jonny-Rocks Stadium – is it exciting to be a part of?

Of course you can sense it with each passing week and with each positive result. We’ve had a few negative results but I think all of the lads are excited and looking forward to it. The training intensity is there, everyone is still working hard in the gym, on the pitch and off the pitch. It should make for an exciting end to the season and hopefully we’ll be right amongst it.

Evans will be in action again on Saturday as the Robins look to make is six straight wins with another tough fixture against Port Vale at the Jonny-Rocks Stadium.

Tickets for the game are on sale from the ticket office on Thursday and Friday between 10am and 3pm, while they're also available to purchase at any time online.