Over three months on from the cessation of the regular League Two season, Cheltenham Town return to action on Thursday night for the first leg of the League Two play-off semi-finals against Northampton Town (kick-off: 7.45pm).

The Robins will take to the field at the PTS Academy Stadium for the first of the semi-final legs in the unique circumstances of playing one of the biggest matches in the club's history in front of zero supporters.

The impact of the covid-19 pandemic means very sadly that supporters will not be admitted to fixtures for the foreseeable future, but Michael Duff's side will head out into battle on Thursday knowing that they will be being backed across the world by thousands of Cheltenham supporters willing them on to achieve promotion to League One for the third time in the club's history by the end of June.

Opponents Northampton will provide a huge test, just as they have done when the two teams met during the regular season, but having enjoyed a fantastic season the Robins will travel with confidence to Northamptonshire as they aim to be the fourth team from League Two to join next season's crop of League One clubs.

Supporters are reminded that Thursday's match is being strictly played behind closed doors. No supporters will be able to get into the match and it's strongly advised that you do not make the trip to be outside the stadium.

You can catch full coverage of the match on Sky Sports, or alternatively you can tune in on the radio by listening to BBC Radio Gloucestershire or TalkSport.

Michael Duff explained in his press conference on Tuesday that some players were carrying niggles, however it's a fully fit squad that are making the trip.

Having not played in over three months competitively it's expected that Duff will be required to use the full depth of his squad across the two legs.

For captain Ben Tozer it is a return to a club he spent five years with across a permanent spell and two loan stints.

All players currently on loan to the club are available to play.

Watch Duff's press conference with the media from Tuesday:

Northampton secured 7th position and the final play-off spot at the curtailment of the regular season.

They are looking to get back into League One - a level they were last at two seasons ago - with former England international Keith Curle (pictured) in charge in the dugout.

His squad boasts plenty of Football League experience and depth too, which could prove important given the circumstances in which these play-off fixtures have come about.

David Cornell has been their regular man in goal this season. The Welsh stopper had been displaced briefly before the lockdown however by powerful stopper Steve Arnold so Curle may opt to stick with former Forest Green man Arnold. 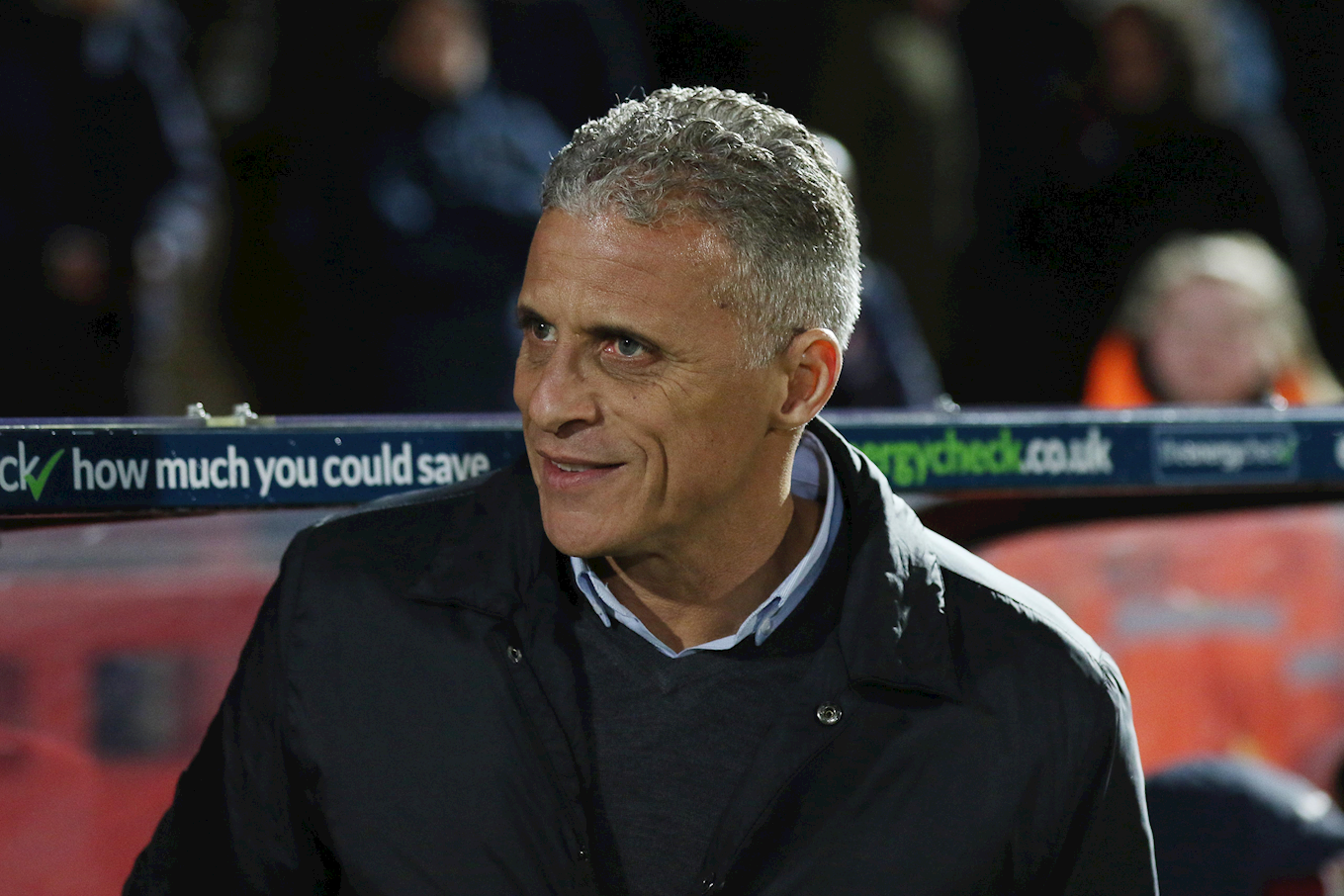 In defence Wiltshire born Jordan Turnbull has featured regularly this season and his last goal for the Cobblers came in the 1-1 draw at the PTS Academy Stadium in late December. Charlie Goode similarly has been a consistent pick in their back line. Ex-Cheltenham loanee Lloyd Jones is on loan from Luton - he represented the Robins back in 2015 in a temporary stint from Liverpool.

Their wide areas are boosted by the experienced Nicky Adams. He won promotion out of this level with Bury last season and is a threat when it comes to deliveries into the box. January signing Mark Marshall is another possible candidate to feature out wide, as is ex-Stevenage man Joe Martin or Paul Anderson among others.

In the middle of the park they could turn to the experience of 36-year-old Alan McCormack or possibly former Bristol Rovers man Chris Lines who helped the Pirates achieve back-to-back promotions from the National League to League One in recent years. Ryan Watson is younger but still brings good League experience.

Their physical presence up top offers a real threat. At 6'5'' Harry Smith provides a strong challenge, while Vadaine Oliver can also hold the ball up with his strength.

The long-serving and nimble Sam Hoskins is their leading goal scorer and plays just off the front line however will miss the first leg due to suspension. Nevertheless, Callum Morton, on loan from West Bromwich Albion, is a lively addition to their attacking set-up since he arrived at the Cobblers in January.

This is Thursday's opponents first play-off match since they lost the League Two play-off final to Bradford City at Wembley in the 2012/13 campaign.

The first clash between the two clubs was the final match of 2019 at the PTS Academy Stadium in between Boxing Day and New Year's Day.

Academy product George Lloyd was hauled down just a couple of minutes in after he latched onto the end of a Jacob Greaves forward pass.

Conor Thomas stepped up to coolly stroke the Robins ahead in front of the travelling supporters.

Northampton hit back though when they levelled through Jordan Turnbull's close-range finish after a Nicky Adams free kick had been parried by Scott Flinders.

Alex Addai was sent off in the last seconds of the game in stoppage time for reacting to Cobblers defender Charlie Goode.

Watch back the highlights from that match at the Cobblers home earlier in the season:

The second meeting this season took place on a Tuesday night at the Jonny-Rocks Stadium and was one of the last matches both sides played before the season was eventually ended because of the coronavirus.

On that night it was Northampton's time to take an early lead. Ryan Watson found the bottom corner to break the deadlock.

And victory was secured for Michael Duff's men in the closing minutes. A corner delivery wasn't cleared by the visitors and Luke Varney was on hand to prod home to snatch all three points.

Revisit that clash with the highlights from the last night game at the Jonny-Rocks Stadium:

Enjoy a special discount with Pepe's

We've teamed up with our friends at Pepe's Piri Piri in Cheltenham to offer supporters a discount on orders for our play-off semi-final ties with Northampton.

Fans can enjoy a 20% discount when ordering with Pepe's over both the phone and via their app when spending over £15.

To take advantage of this offer you need to use the code CTFC at the payment screen when making your order. The offer is not valid with any other discounted items, deals or extras, and is only available on the nights the play-off semi-finals are taking place.

Get involved in the action!

We know you can't be there but we still want to make sure we're hearing from the supporters during the match.

On Monday for the second leg over 1,000 foamex cut-outs with supporters faces will grace the Jonny-Rocks Stadium, but for the first leg we want to see how you're watching the game and want to receive your messages showing your support for the team.

Make sure you tweet @CTFCofficial with your messages of support and pictures and we'll share as many as we can!

The match is being shown exclusively on Sky Sports and is available on Sky channel 403. It is not available to watch on iFollow.

You can listen to radio commentary on BBC Radio Gloucestershire, while there's also coverage on TalkSport.

Stay up to date with the scores, in game photos and key moments by following @CTFCofficial on Twitter.

After the match check out the club website to read the match report and for reaction. 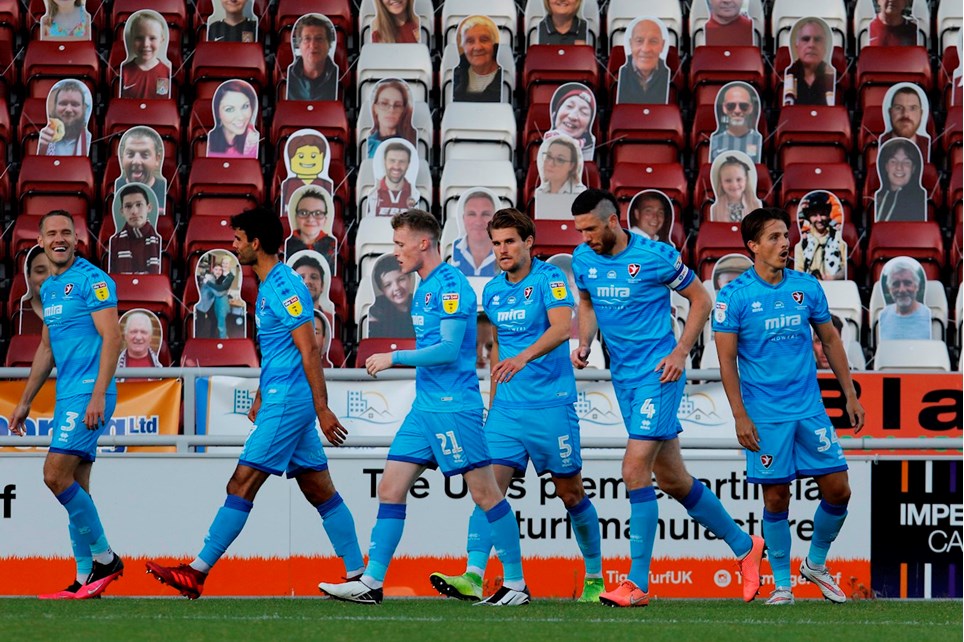 
It's all focus on the Jonny-Rocks Stadium this evening as the League Two play-off semi-finals come to their conclusion with Cheltenham Town and visitors Northampton Town battling it out for a chance... 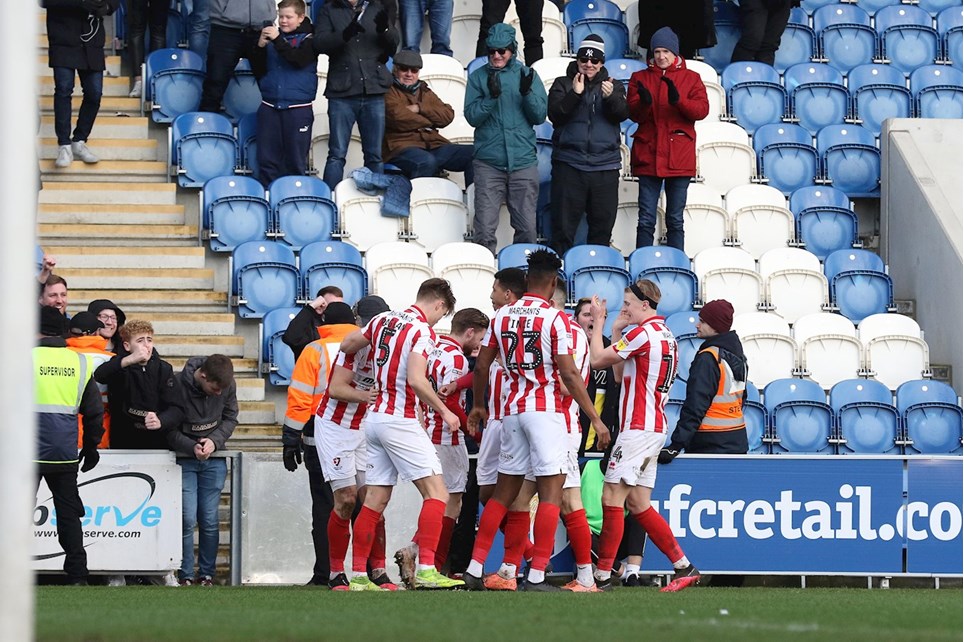 
The challenging games keep on coming for Michael Duff's Cheltenham Town side as seventh place Port Vale are the visitors to the Jonny-Rocks Stadium this Saturday (kick-off: 3pm). 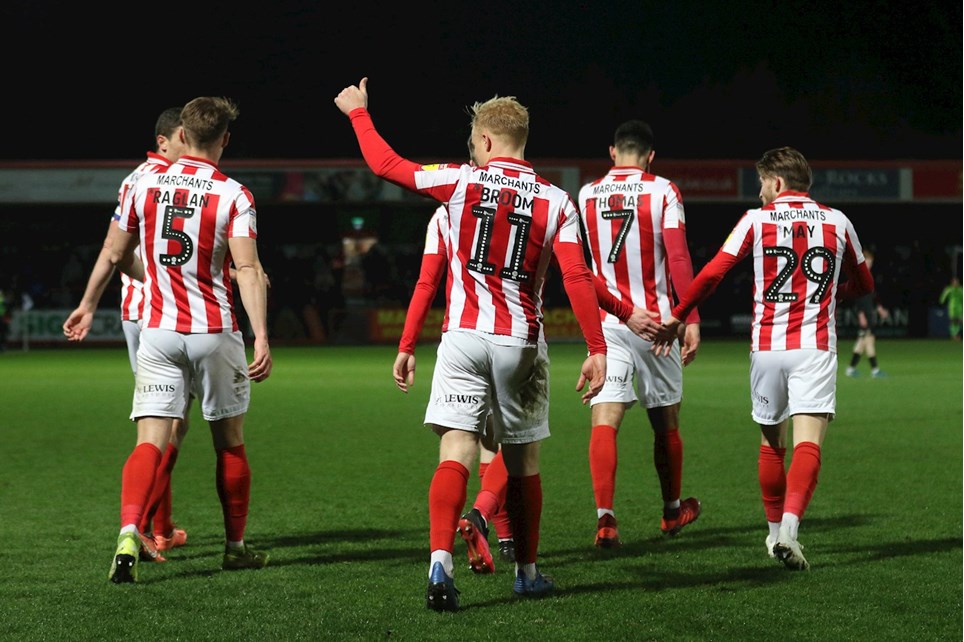 
After a run of three straight home matches Cheltenham Town are on the road on Saturday with a visit to the JobServe Community Stadium to take on Colchester United (kick-off: 3pm). 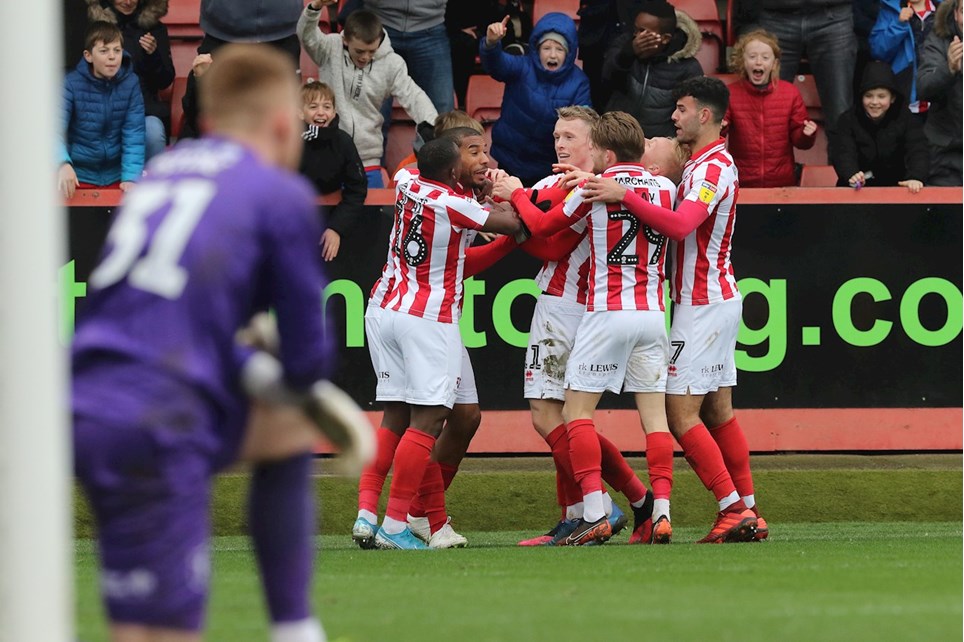 
The first of three challenging games against teams in and around the League Two play-offs sees Northampton Town visit the Jonny-Rocks Stadium on Tuesday night (kick-off: 7.45pm).