Michael Duff is pleased with the positivity and progress that has been made with his Cheltenham Town squad since they returned to training at the start of the month ahead of the League Two play-offs.

It's been confirmed that his team will take on Northampton Town in a two-legged play-off semi-final after clubs in the division voted to formally end the 2019/20 season today - subsequently seeing the Robins finish fourth in League Two on points per game.

Duff's charges join Exeter City, Colchester United and semi-final opponents Northampton in the play-off mix with a Wembley final, scheduled for Monday 29 June, set to decide who will follow Swindon Town, Crewe Alexandra and Plymouth Argyle into League One for the 2020/21 season.

"It's positive," Duff claimed when describing the mood in the camp. "People are looking forward to it now. Everyone just wants to finish the job. We reported for pre-season nearly a year ago - we were in I think 25 or 26 June. We're in June again now. There's a lot of hard work that's gone into this season.

"I'm sure we're exactly the same as the other three teams, we'll be doing everything we can, preparing the best we can, in not ideal circumstances. The situation is the situation and we're trying to finish the job off. Ultimately there's going to be one team that are going to get promoted out of League Two and we want to make sure it is us."

His side played a behind closed doors fixture against Championship opposition today in what is the first match minutes the team have enjoyed since their final fixture on 7 March against Port Vale, and he was very happy with what he saw.

"It was a really good workout," he added. "Everyone got 60 minutes against good opposition in Cardiff. There was some really good football played. Everyone seems to have come through it unscathed which is a bonus because it's obviously a bit sooner than what we'd normally do. 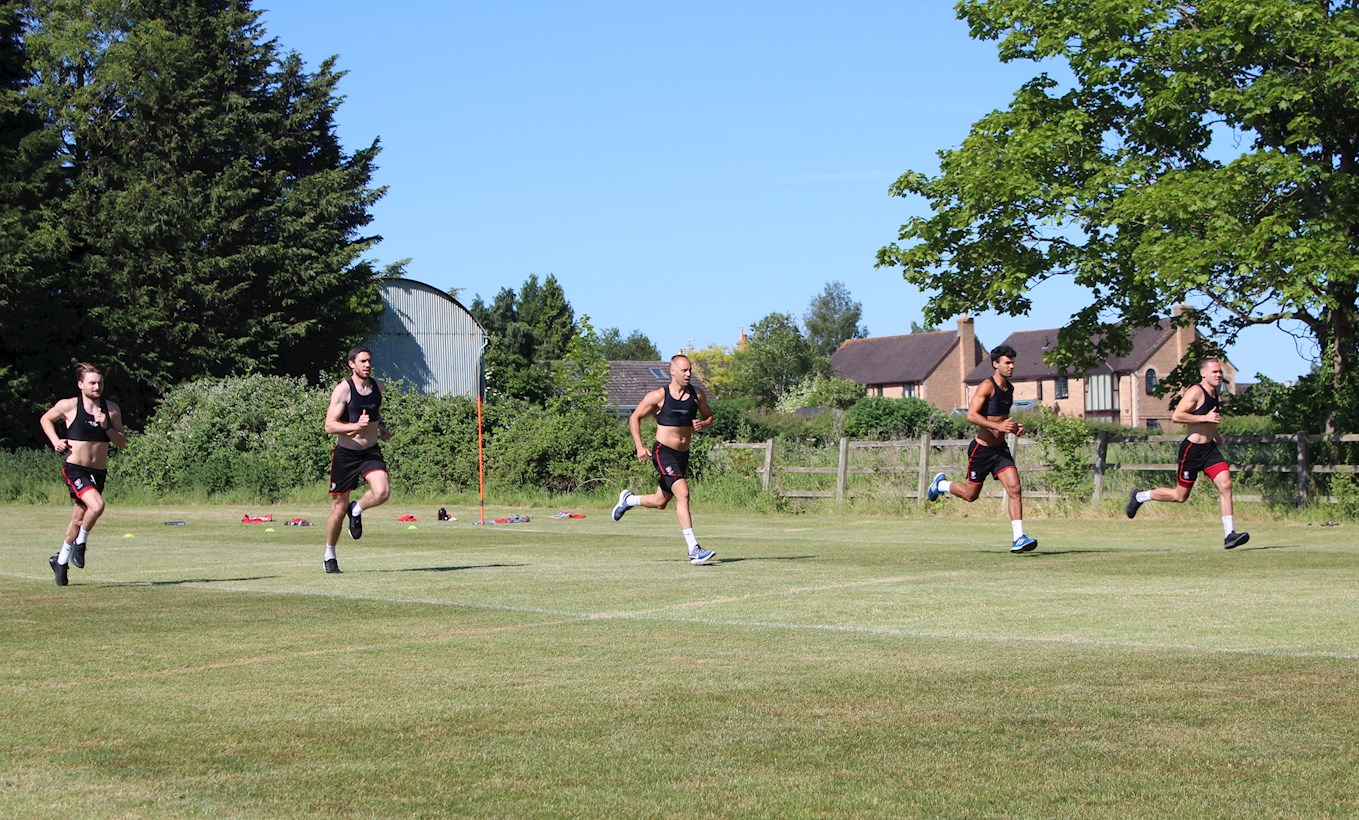 "We wouldn't normally ramp it up this quickly with the situation we're in and the time scale we're on. Hopefully it gives the lads confidence because there would have been a little bit of nerves. The really pleasing thing was there was some really good football played.

"We've gone from returning to training on Monday, of which Monday and Tuesday they weren't allowed to go near each other, to a week later playing an hour against a Championship team. That's a really steep curve that you wouldn't normally get to.

"You'd normally periodise it more but everyone is in the same boat so it's trying to get them as fit as we can and as mentally resilient as we can. You don't want to go into today and break five or six but I think that the players will feel a lot better for getting it done now. Their bodies have proved they can do it against tough opposition as well. Cardiff have got some good players as well and ultimately there was some really good football played which I was happy with."

It's now nine days until his team take to the field for the play-off semi-finals first leg at Northampton on Thursday 18 June.

There's still a huge amount of work to be done but he is of the view that his team is moving in the right direction.

"It's constantly adapting - it changes from day-to-day. You're reacting off the players, each session, even with games. We've had games pencilled in and they've been cancelled.

"We're in the same boat as everyone else so the difficulty we've had is the fact we've got to thank Neil Harris and Cardiff for coming up to us as a Championship club. A lot of them are playing each other - the top two leagues are playing each other. For them to travel to us to give us a game at our ground gives us as feel of what it might look like in terms of distancing while in the changing room and the subs being sat in different areas and things. That's why we wanted to do it. It was a bit of a dry run."

Get behind the team for the League Two play-offs by purchasing a cut-out for our 'Fill the Paddock' campaign for the play-offs. Buy one online and be part of the artificial support at the Jonny-Rocks Stadium for the second leg of our play-off semi-final.