Ten days after last running out on the turf at The Alexandra Stadium against Crewe, Cheltenham Town return to League Two action this evening with a trip to Bradford City (kick-off: 7.45pm).

An unbeaten run away from home that stretched all the way back to September finally came to an end in that last outing at Crewe, and this evening represents a good opportunity to restart another run against the Bantams who are one place and two points ahead in the table having played two games more.

Tonight's opposition haven't won in their last five league games, but despite that boast the second best home record in the division behind league leaders Swindon Town who have played one home game more than them.

It's another bruising challenge in what's sure to be a dramatic second half of the season but Cheltenham will travel to the Utilita Stadium tonight hoping to make it a season double over Bradford having recorded three points over them back in September.

They join a squad that is otherwise missing goalkeeper Scott Flinders - who will miss the remainder of the campaign as he recovers from a broken leg.

Watch Michael Duff's press conference ahead of the game below:

On his return to fitness Luke Varney has also been previewing this evening's clash.

Former top flight side Bradford City may not have been in the best run of form of late, but their home record this season shows they are a very difficult side to get past on home soil.

New goalkeeping addition Luke McGee has signed on loan this month from Portsmouth and is the likely starter with the gloves for them tonight.

In front of him their defence features the likes of Ben Richards-Everton, who has won promotion out of this division before with Accrington Stanley, and Wales international Adam Henley who has two caps to his name having spent the first part of his career with Blackburn Rovers. Non-league product Connor Wood could also be involved.

The Bantams midfield may feature the likes of Jake Reeves, Peterborough United loanee Callum Cooke, and another loanee who knows this level very well in the shape of Jamie Devitt. He's with Bradford on a temporary deal from Blackpool who snapped him up from Carlisle United at the end of last season. 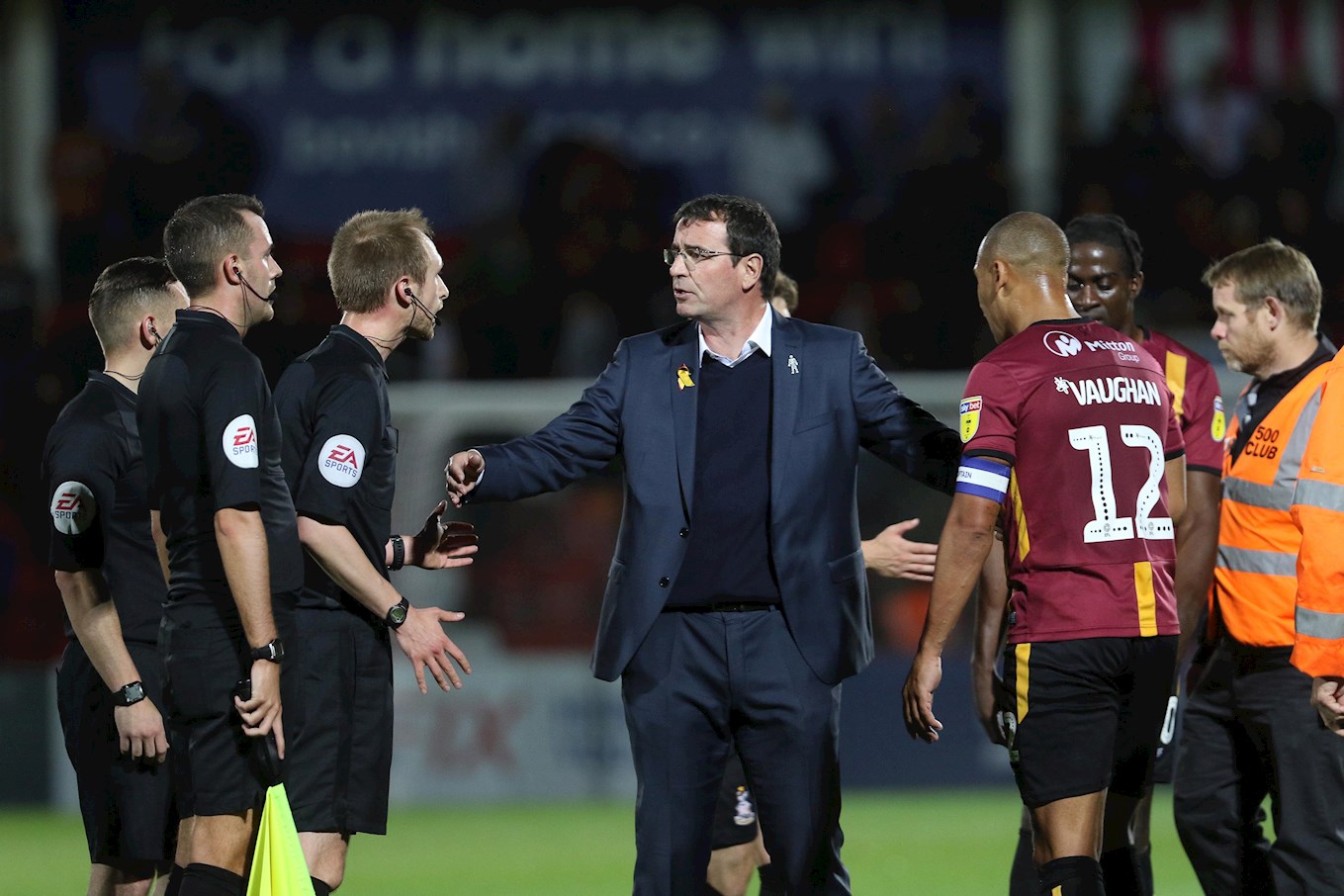 At the top of the pitch their forward line boasts a number of big names at this level. Northern Ireland international Shay McCartan helped Lincoln City gain promotion from this league last season having been on loan from Bradford, while Eoin Doyle has notably been back in their colours after his loan at Swindon came to an end this month.

Former Everton hit man James Vaughan is their leading goal scorer, though he's not featured in their last two matches, and the sizeable Clayton Donaldson can prove awkward to deal with for defenders - he was representing Bolton Wanderers in the Championship last term.

In Gary Bowyer they have an experienced head in charge. He's won promotion from this level before while in charge of Blackpool and has also spent time as manager at Blackburn Rovers following a playing career cut short due to injury which took in time at Nottingham Forest and Rotherham, having started with current Hellenic Premier Division leaders Westfields in Herefordshire before making the short move to Hereford United as his first senior club.

All five goals in a 3-2 win came in the second half with Bradford getting the first through Jermaine Anderson as they broke from a Robins corner on the counter-attack. 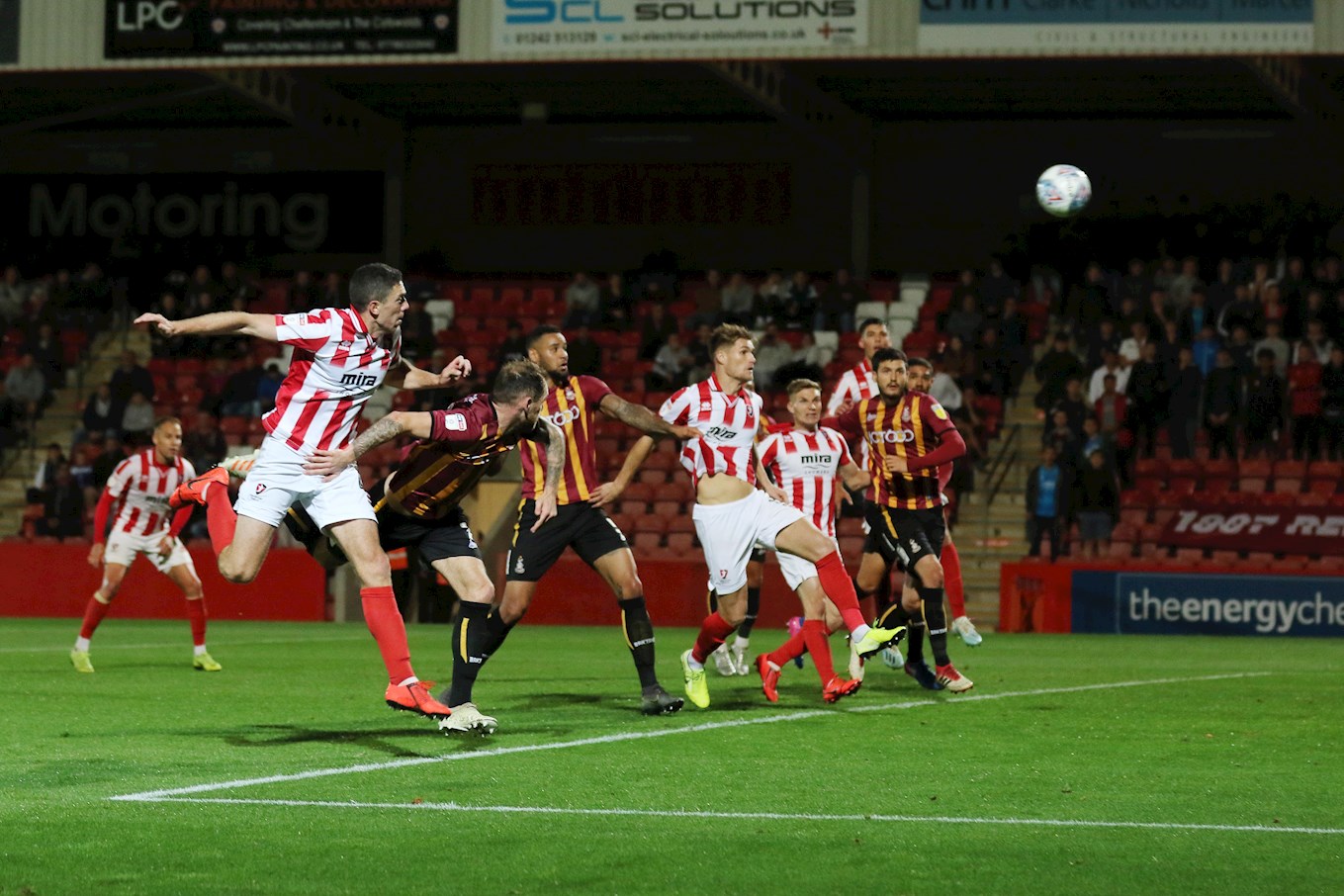 Bristol Rovers loanee Gavin Reilly levelled with a well-taken finish minutes later, and the Robins then took the lead when Jake Doyle-Hayes hammered in for his first goal for the club.

Bradford were back on level terms on 76 minutes however. Ben Richards-Everton headed home a Harry Pritchard free kick to draw parity.

But there was to be one late twist as Tozer's glancing header flew in past Richard O'Donnell to secure an excellent home win.

The ticket office is open this morning selling tickets for the game. Advance ticket prices are:

These rise in price if you are buying on the night.

Supporters booked on the Travel Club coach are reminded that it leaves for the game at 2pm from the Jonny-Rocks Stadium.

You can check out full match coverage of tonight's fixture by watching online with iFollow.

All you have to do is purchase a match pass in advance for £10 and you can check out the whole game on whatever device you prefer to use. 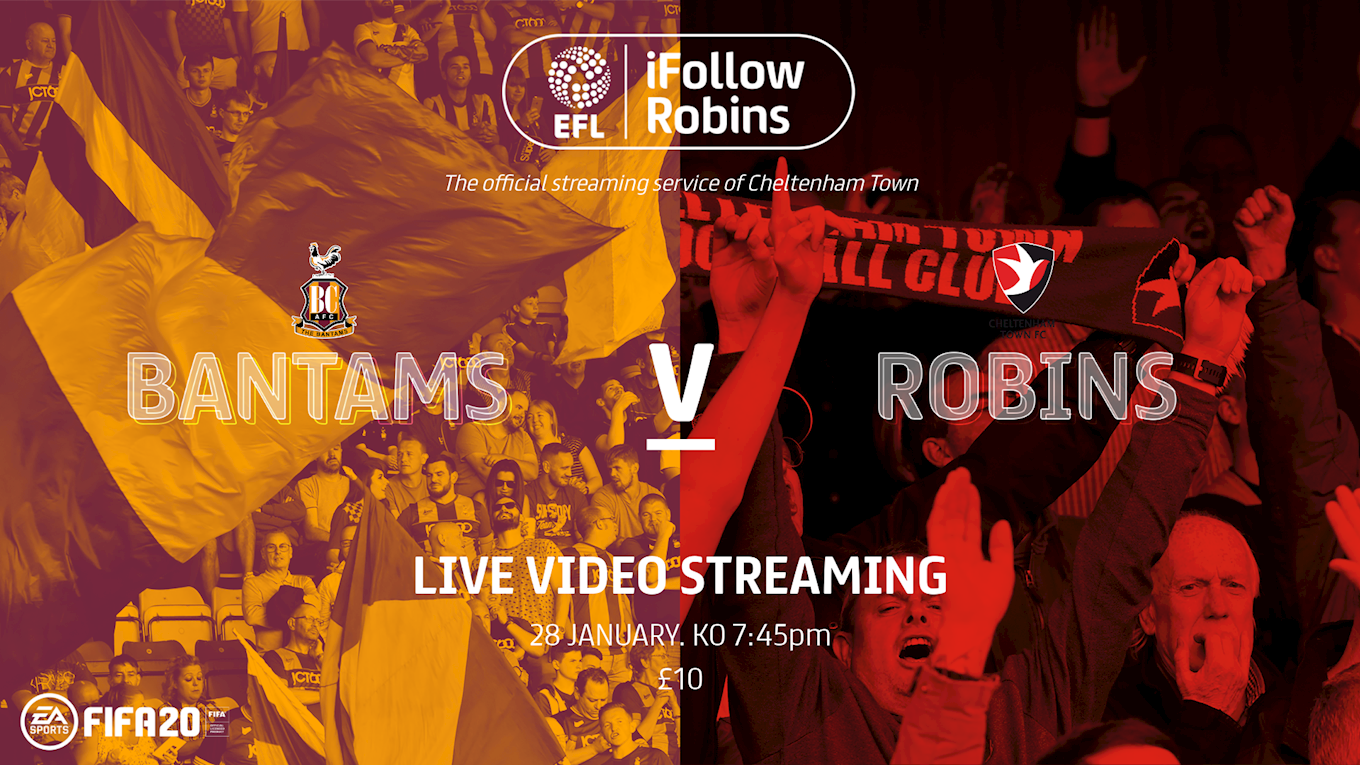 On social media follow the game this evening by following @CTFCofficial on Twitter. Score updates and team news will also be available on Facebook at facebook.com/ctfcofficial.

After the game visit the club website to read a match report and to see reaction from manager Michael Duff to the result.

Highlights will be available on iFollow and on the club's YouTube channel post-match.