Cheltenham Town will make a little bit of club history in the match against Leyton Orient next month.

For the first time in 56 years the Robins will sport a special all-white kit as the home side against the east Londoners on Saturday, February 15.

The joint-initiative is designed to celebrate the life of Hollie Gazzard, who was murdered by her ex-partner in February 2014.

The Hollie Gazzard Trust is the club’s charity partner for the 2019-20 season and a series of events have been planned to drive awareness of the charity’s important work on the day. We will also work together to raise as much money as we can for the fantastic cause.

The Trust work to reduce domestic violence and promote healthy relationships to schools and colleges and will be working with the players and staff in the coming weeks and months. 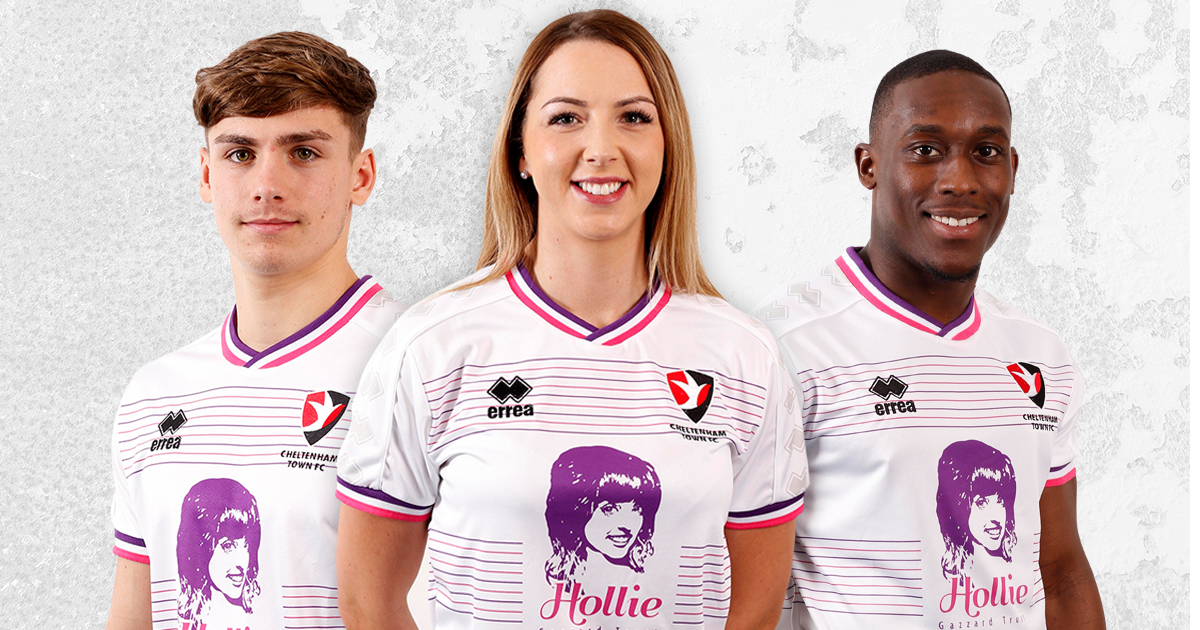 The unique one-off kit is all white with a purple and pink trim to reflect the striking brand colours of the Trust. Inside the neck of the shirt is one of Hollie’s favourite quotes: Smile often, think big. It will form the theme of our celebration on the matchday.

Mira Showers, Marchants Coaches and RK Lewis have generously donated their sponsorships to the charity’s partners in order to raise even more money.

The club has invited members of the Cheltenham Town Ladies Youth squads to join us on the day, becoming our ‘Flying Squad’ to form a guard of honour as the players take to the field.

An army of volunteers will be on hand to rattle buckets around the ground and the 1887 Red Army will pay a tribute of their own with a banner shortly before kick-off. After the match, legend DJ Shippers will be playing in the main bar to finish the day with a party.

The supporters will be able to select their player of the match towards the end of the game on social media and we will be auctioning their shirt in the main bar immediately after the final whistle, hosted by broadcaster Tom Watt.

The remainder of the matchworn shirts will be auctioned online by our partners AMS Auctions, who have kindly agreed to play their part in this initiative and we also thank them for their support. Full details will be released in the build up to the game. 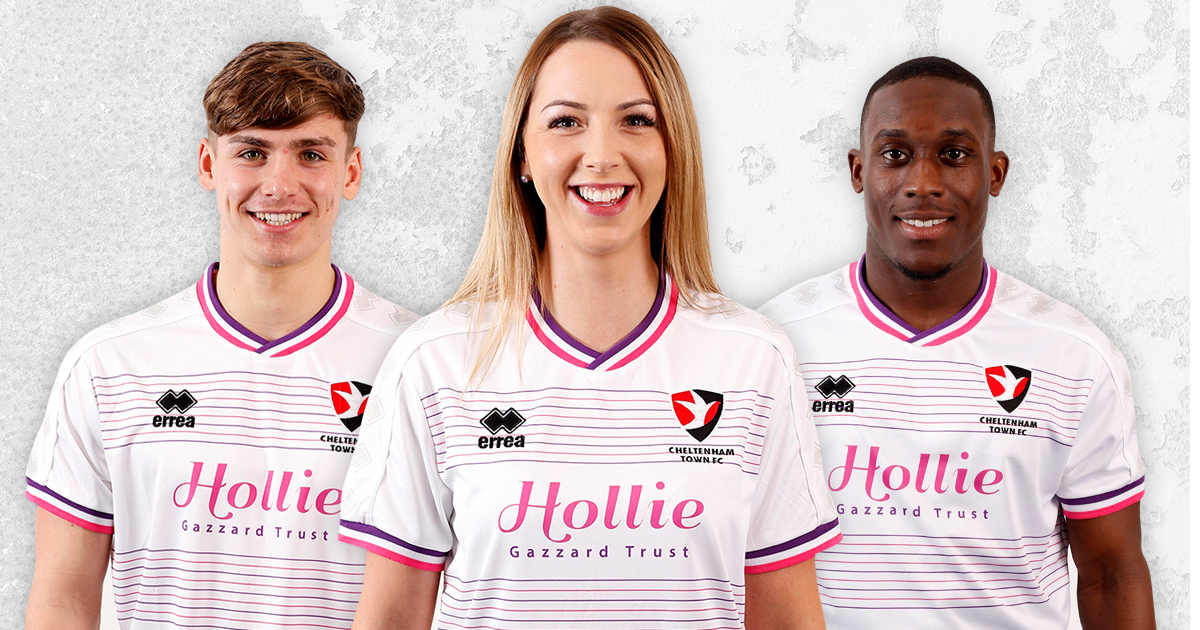 A very limited run of the shirts has been produced for sale both by the club and the Hollie Gazzard Trust. There are two designs, one of which features Hollie’s face. That design will be available through the Trust.

Michael Duff's side will be playing in the shirt without the face against Leyton Orient and these are available to buy now through the club's online shop, and the club shop from tomorrow morning onwards. The profits from the sales will be passed to the Hollie Gazzard Trust. Details about the sales through the charity will be shared in due course.

Michael Duff’s side will train in the special kit on the Thursday (February 13) before the important League Two match at the Jonny-Rocks Stadium.

John Finnigan, the club’s Commercial Manager, has been working closely with the charity over the season and has been instrumental in pulling the event together.

“Football has the power to really make a difference in its communities and we want to do as much as we can to drive awareness of the Hollie Gazzard Trust’s vital work.

“I’ve seen first hand how dedicated their team is tirelessly improving people’s lives and that’s why it’s important we support them as much as we can as a club.

“They are an inspiration to us and we want to use our platform for real good in our community, and I hope our fans will really get behind this initiative.” 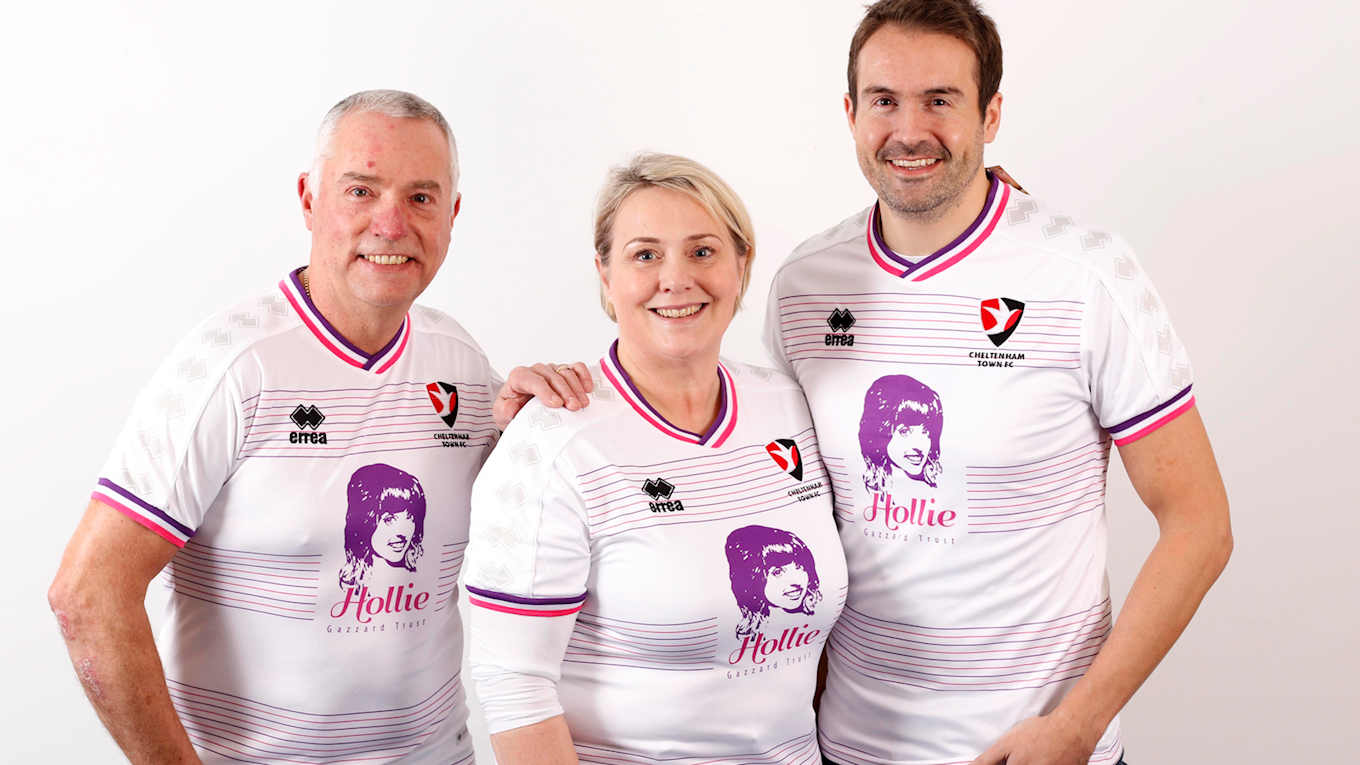 The Hollie Gazzard Trust was set up by Hollie’s parents, Nick (pictured above with Klara Sudbury and David Jordan from the charity) and Mandy, and her sister Chloe. Nick made 45 appearances for the Robins in total, scoring 14 goals between 1983 and 1987 before a knee injury curtailed his career.

Nick has campaigned tirelessly to make sure people are safe and tried to raise awareness of knife crime, stalking, domestic abuse and abusive relationships.

“This is an incredible gesture from the club and we are looking forward to the day,” he said.

“They are having one hell of a season and it promises to be a good game. Leyton Orient sadly lost their manager to a heart attack in the close season and Cheltenham were their first game after. The club gave them a special flag so there is good feeling between the clubs.”

Cheltenham Town supporters made national headlines back in August when they crowdfunded a flag to pay tribute to their late manager Justin Edinburgh at The Breyer Group Stadium.

The Robins last wore an all-white home kit during an eventful four-year period in the early 1960s. It saw the club initially relegated from the Southern League Premier Division in 1962. Tommy Cavanagh began that fateful campaign as the manager but he was later replaced by Arch Anderson, who couldn’t prevent relegation.

The Scot though led the Robins back to Southern League Premier Division two years later after which, Cheltenham returned to stripes in 1964. Since then the only white kits have been away ones, the last of which was used against West Ham United at Upton Park in 2013.