Following a three month spell on the sidelines between October and December, Tahvon Campbell has been back in the Cheltenham Town starting XI of late, starting in the last three matches.

The forward celebrated his 23rd birthday last Friday and led the line alongside new signing Alfie May once again in the victory over Walsall at the Jonny-Rocks Stadium.

It's been a welcome return to Michael Duff's team after the Birmingham born attacker endured a frustrating start to his time at the club.

Now he's looking to put that frustration behind him and push on with making an impact in his first season at the club this term.

You've been back in the starting XI of late. Does that help to build your confidence back up after a frustrating campaign personally for you so far?

It has been tough and I’m just trying to get a rhythm back going. Joining a new team I’ve played at a few teams over the last two or three years and every team has got a different style. There are different requirements so what I’m asked to do is different every time. But right now I feel like I understand what’s wanted from me here and I am just going to try and deliver that now.

The manager has spoken recently about the different strengths you bring to the team. What do you feel you bring?

I feel like with me on the pitch I am always going to try and go towards goal whether that’s me taking shots or me playing somebody in. Strength, skill, I’m just going to try and be direct when I play and go for goal.

You had the frustration of your knee injury which kept you out for a number of weeks. How did that happen and what happened to get you back to fitness?

The weird thing is I don’t actually know how it happened. I had a scan because I was struggling with it for a little bit while I was still playing. I was playing some games, training as well, and I had a niggle. It was playing on my mind so we went and had the scan and found out it was worse than I thought it was. We ended up pulling me out and it took a while to get back right but I’m pain free right now so I’m happy with that.

What has the messaging been from the manager to yourself?

He has told me how he wants me to play from an attacking and defending point of view. He’s kept it quite simple for me but the main thing is to work hard, run in behind and score goals. That’s what I’m going to try and do. 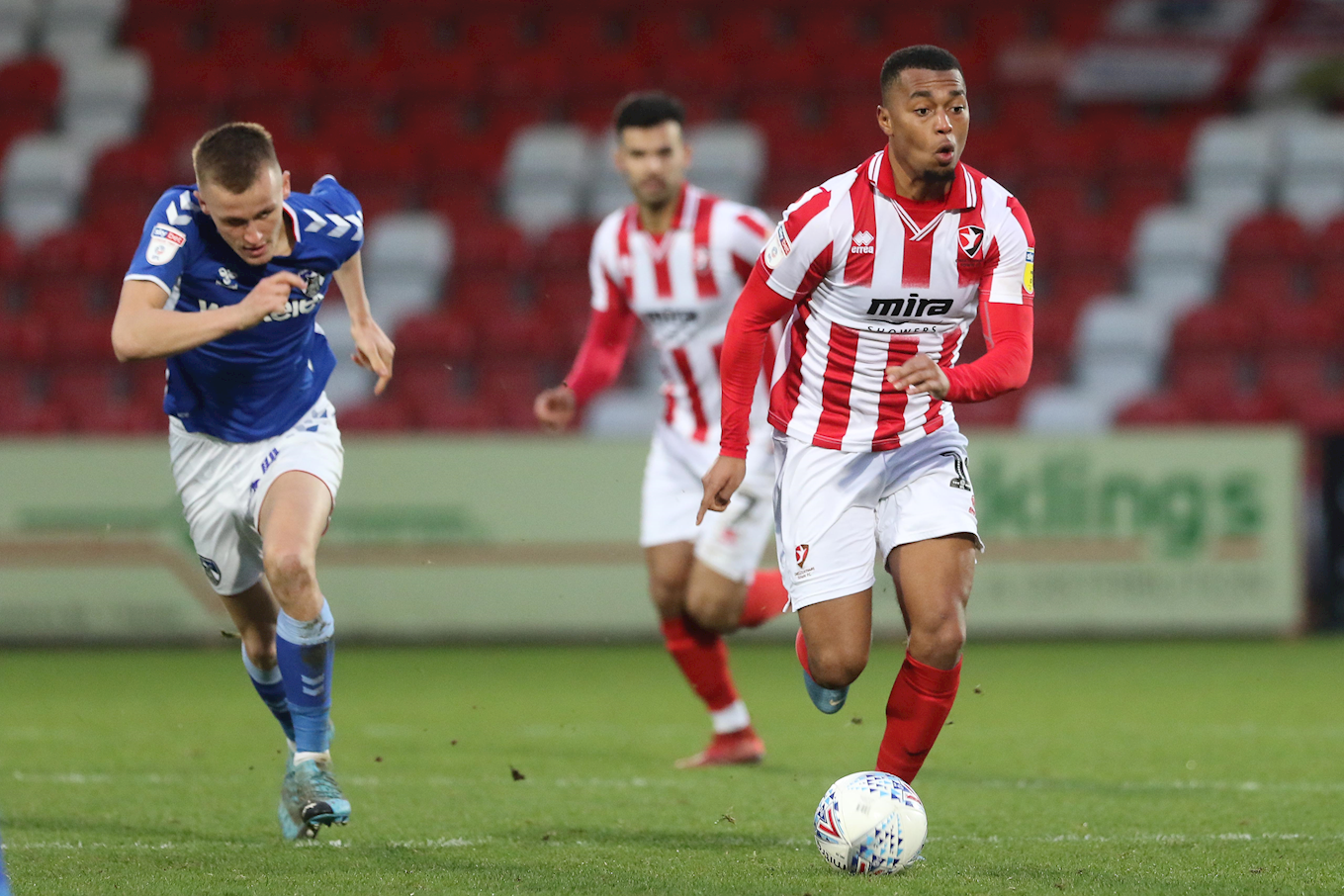 Looking back you came through the ranks at West Bromwich Albion. How would you sum up your time at the Hawthorns?

I really enjoyed my time there. Growing up where I come from it helped me in more ways than just football. They gave me somewhere to be when it might have been a bit dangerous for me to be on the streets where I’m from. It was good in that sense but I was learning new things, trying new things, and met loads of different people – lifetime friends – and I feel like I developed a lot of my skill and I enjoyed it there.

From a young age you were sent out on loan to various clubs whether that was Solihull Moors, Notts County, Yeovil Town or Kidderminster Harriers. What was it like going out to so many different clubs?

I didn’t play much reserve football or under-23s. They just told me to go out on loan straight away to get the experience and I was fortunate enough to have clubs that were wanting to take me at that age. I played some game time in the National League, moved up and played in League Two and have played in League Two from the age of 18 upwards. I still need to get regular game time in terms of starts and get my numbers up and have a breakthrough season as they say. Hopefully it is this one coming into the second half of the season.

Your final loan spell was at Forest Green who you joined permanently afterwards. Was it a natural decision to make that move after your West Brom contract came to an end?

At the time when I went on loan there I did feel comfortable. I knew the manager and I knew they wanted to take me on a permanent once my contract was finished. It wasn’t really hard for me, I never looked anywhere else because I was happy to go back there. In the end it didn’t work out the way I wanted it to with me giving my all and still struggling to find game time so I went out on loan to Gillingham.

You ended up getting loaned up a league to League One with Gillingham. How did that transfer come about at the end of the January transfer window?

I knew about it maybe two or three days before deadline day. I wasn’t sure if I wanted to go because I didn’t know if I’d play and I was thinking whether to go to a team in the same league and try and get somewhere where there was more guaranteed games, even though you can’t guarantee games. My agent let me know they were interested and I thought why not challenge myself?

A free agent in the summer, Cheltenham Town came calling. How did your move to the Jonny-Rocks Stadium happen?

When I found out I came and met the manager twice before I signed to talk about the club and for me to learn more and for him to learn more about me as a person as well. Once that happened I was happy to go ahead with the deal.

Campbell will next be in action for Cheltenham on Saturday when the team travel to Crewe Alexandra for a third against fourth place clash in League Two. Kick-off at The Alexandra Stadium is at 3pm.

Tickets and away travel for the match are on sale from the ticket office on a Tuesday, Thursday and Friday between 10am and 3pm.