Cheltenham Town will make history on Saturday by sporting a special all-white kit for the first time in 56 years for the visit of Leyton Orient to the Jonny-Rocks Stadium (kick-off: 3pm).

A joint-initiative with the club's season charity partners, The Hollie Gazzard Trust, will see the club celebrate the life of Hollie Gazzard, who was murdered by her ex-partner in February 2014, while raising awareness of the work the charity set up in Hollie's name do to reduce domestic violence and promote healthy relationships.

The day has been supported by opponents Leyton Orient, who have themselves generously donated £500 to the charity.

Hollie's dad, Nick, was a player for Cheltenham during the 1980s. He made 45 appearances scoring 14 goals before a knee injury curtailed his career. Now the charity which he has founded will take centre stage on Saturday in what is another crucial afternoon for the Robins as they look to follow up Tuesday's fine midweek win at Carlisle United.

Tickets for Saturday's match are available to buy online, while they're also on sale at the turnstiles.

George Lloyd and Scott Flinders are the only absentees through injury. Chris Clements could return after a recent illness.

Defender Will Boyle has also been speaking to the media ahead of the match.

Saturday's match is raising awareness of charity partners The Hollie Gazzard Trust, the great work they do, and to spread the message further to make sure people are safe and are aware of the dangers of knife crime, stalking, domestic abuse and abusive relationships.

For this game only Cheltenham will wear an all-white kit which has the Hollie Gazzard Trust logo emblazoned across the front. Fans can purchase the kit from the club shop.

On Saturday there will be bucket collections taking place, the Robins Trust 1-to-100 tickets will see all profits made donated to the charity, and the club has changed all of its social media GIFs and graphics to reflect the colours of the charity which you'll also be able to see on the big screen inside the stadium.

The big screen will also be showing the charity's campaign videos, while the 1887 Red Army will proudly display a large flag with Hollie's face on in Block 7 of the Colin Farmer Stand ahead of kick-off. 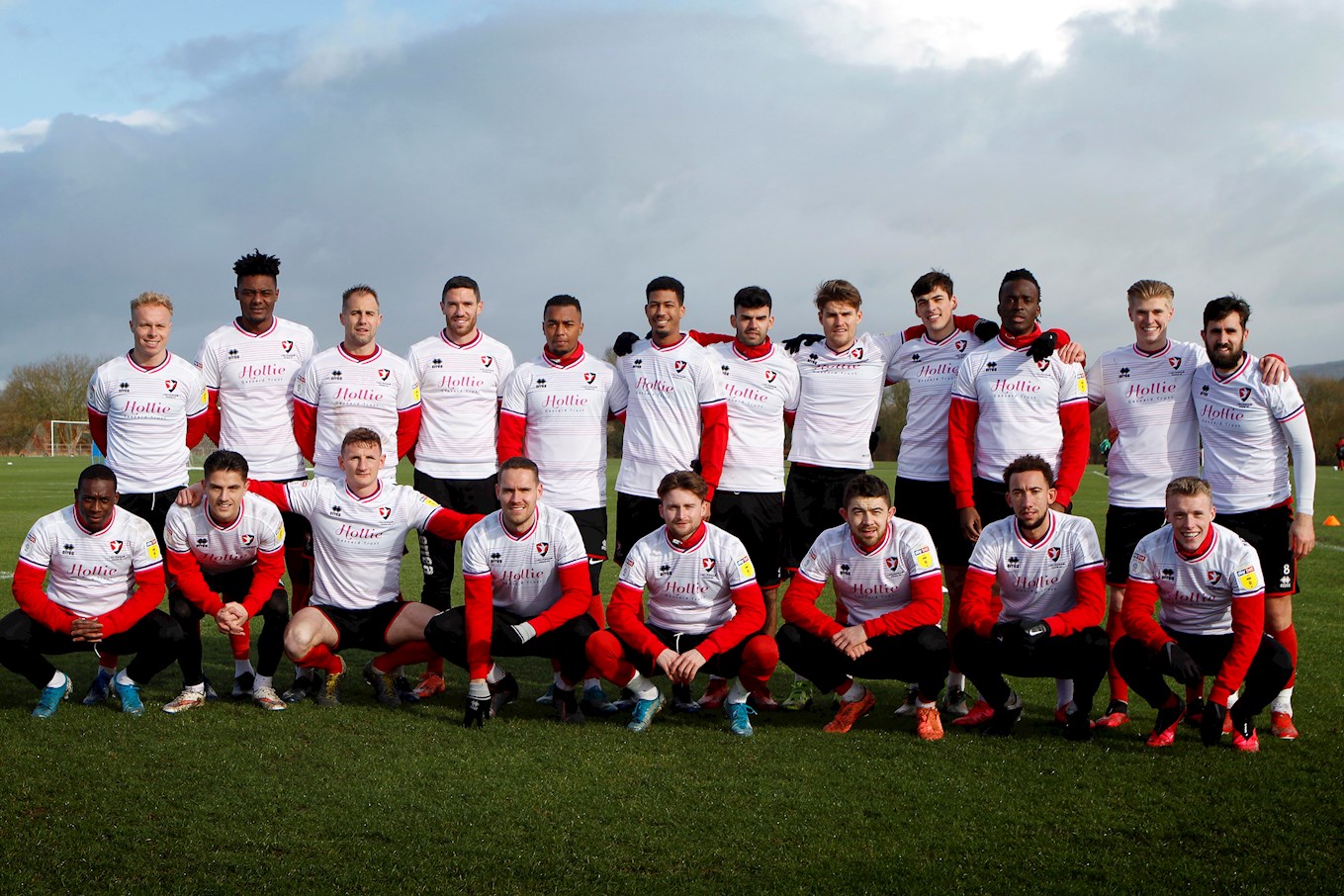 Players from Cheltenham Town Ladies Youth will form a guard of honour for the two teams when they enter the pitch with guests from Rowanfield School also watching the game.

Towards the end of the game fans on Twitter will be selecting a matchworn shirt to be auctioned off in the Robins Nest bar after the match. The auction will take place at 5.30pm.

The remainder of the squad's kits will be auctioned off by club partners AMS Auctions as of Tuesday morning.

The day will end with DJ Shippers playing tunes in the Robins Nest until 9pm for supporters who want to enjoy the rest of a big matchday at the Jonny-Rocks Stadium.

Orient have won three of their last five games, including a victory in midweek over Mansfield Town, and they sit sixth in the form table in League Two.

He leads a side that includes former Swindon Town loanee goalkeeper Lawrence Vigouroux who is back in English football after a spell playing in Chile.

Their defensive unit includes ex-Cambridge United man Josh Coulson who at 31 is one of the most experienced players and leads the team as captain. Youth product Dan Happe is another who could be involved. 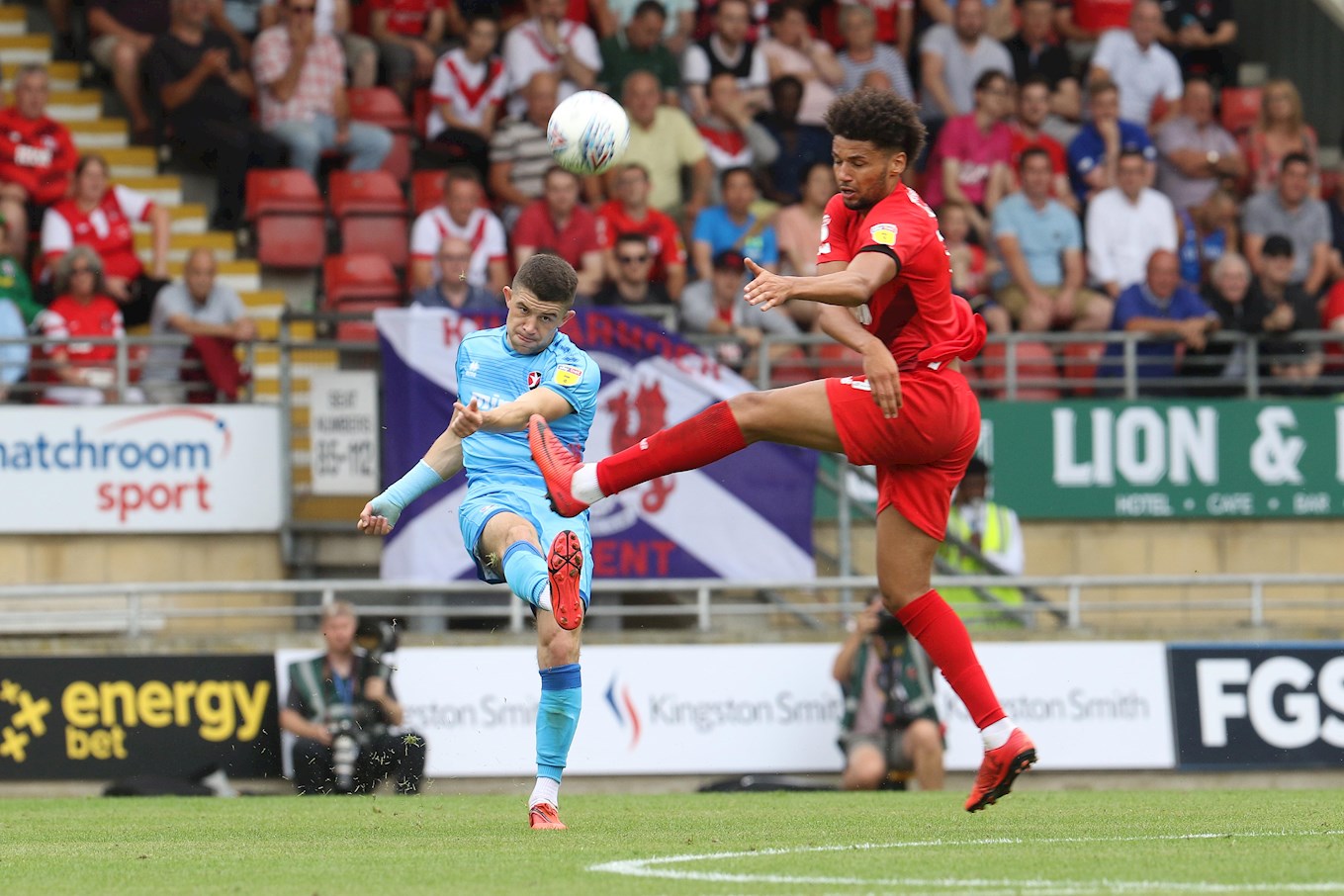 In midfield their January recruitment of Mali international Ousseynou Cissé on a loan transfer from Gillingham has helped to anchor the middle of the pitch.

Others like ex-Motherwell man Craig Clay and former Cheltenham midfielder James Dayton are possibilities in the middle of the pitch, while 18-year-old Hector Kyprianou could be one they look to as well as Josh Wright.

The Robins will have to be on it to defend their lively attack. January signing Danny Johnson is a dangerous finisher, Connor Wilkinson offers a physical presence and Lee Angol was previously part of the set-up at Peterborough United, Mansfield and Lincoln. Former Brighton & Hove Albion youngster Jordan Maguire-Drew is also someone they can turn to up top.

It is Orient's first trip to this part of Gloucestershire since the opening day of the 2016/17 season when they secured a 1-1 draw.

Buy tickets online with the ticket office open from midday on Saturday. Tickets are also available on all turnstiles on the day.

Tickets and away travel for the upcoming away match at Colchester United on Saturday 29 February are available, as well as tickets for upcoming home fixtures against Mansfield Town and Northampton Town.

The club shop is open from midday too selling match programmes and merchandise, including the special on the day Hollie Gazzard Trust shirts.

Former Robins goalkeeper Shane Higgs will be back at the Jonny-Rocks Stadium on Saturday as a guest of the club.

Higgs made over 240 appearances in his time at Cheltenham over the course of a decade after starting his career at Bristol Rovers before having a spell in between at Worcester City.

After his success as a Robins 'keeper he transferred to Leeds United before ending his career at Northampton Town.

Higgs will be meeting supporters on Saturday and will be presented to the fans at half time. 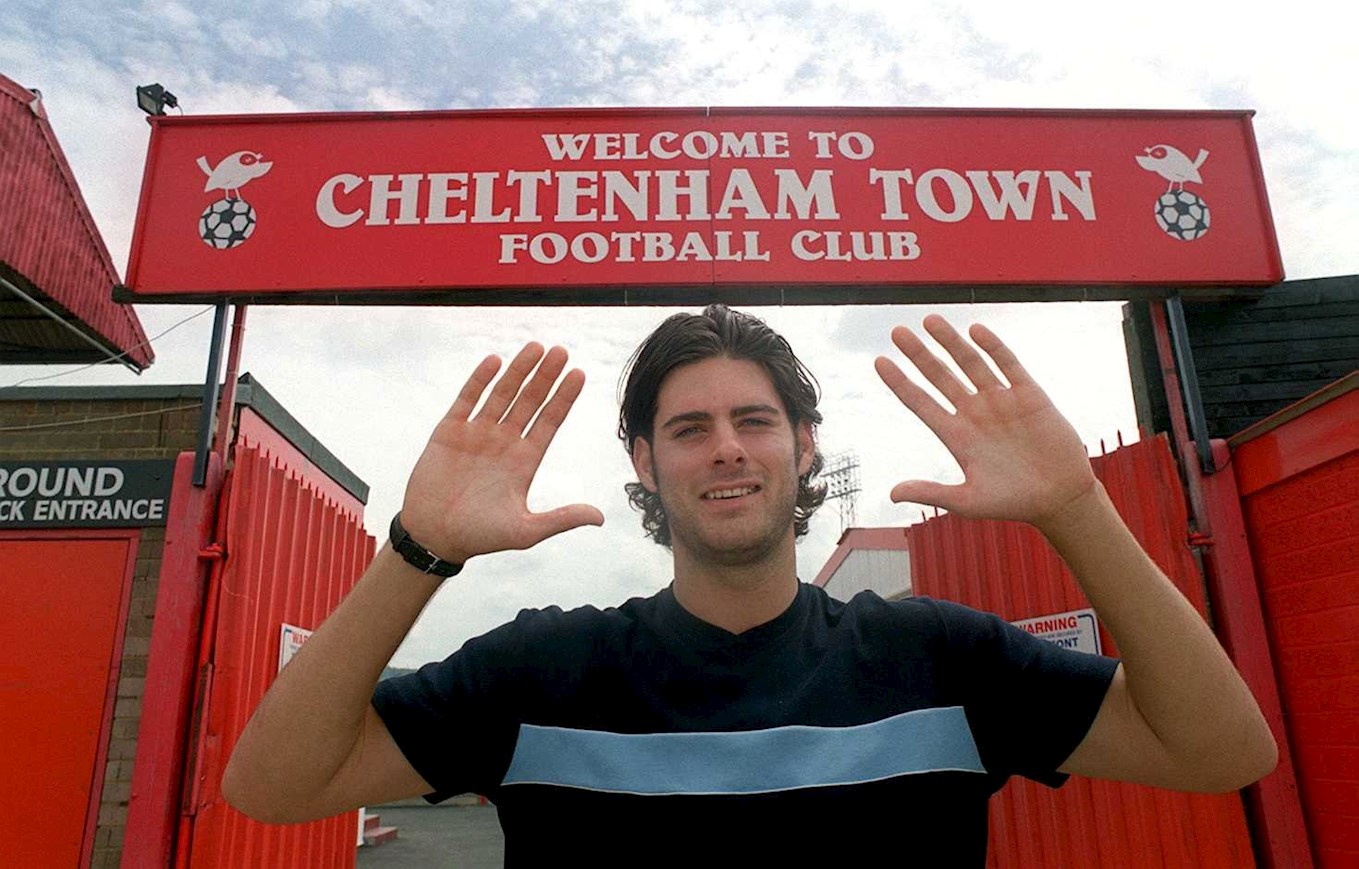 Chris Hussey is the big interview as the wing back discusses having to adapt his role in the team and the progress his former club Sheffield United have made, having been a part of the start of their resurgence towards the Premier League.

Luke Varney is also on interview in the programme while Alfie May answers the quickfire questions.

Under-18s forward Dan Stevens reveals how he's finding life as a first year scholar at the club, Michael Duff pens his regular notes and Jon Palmer from the Gloucestershire Echo speaks to Hannah Marshall as the Cheltenham Town Ladies player gets set to move abroad to play.

Saturday's match programme is on sale around the stadium for £3 and is also on sale at the club shop and online. 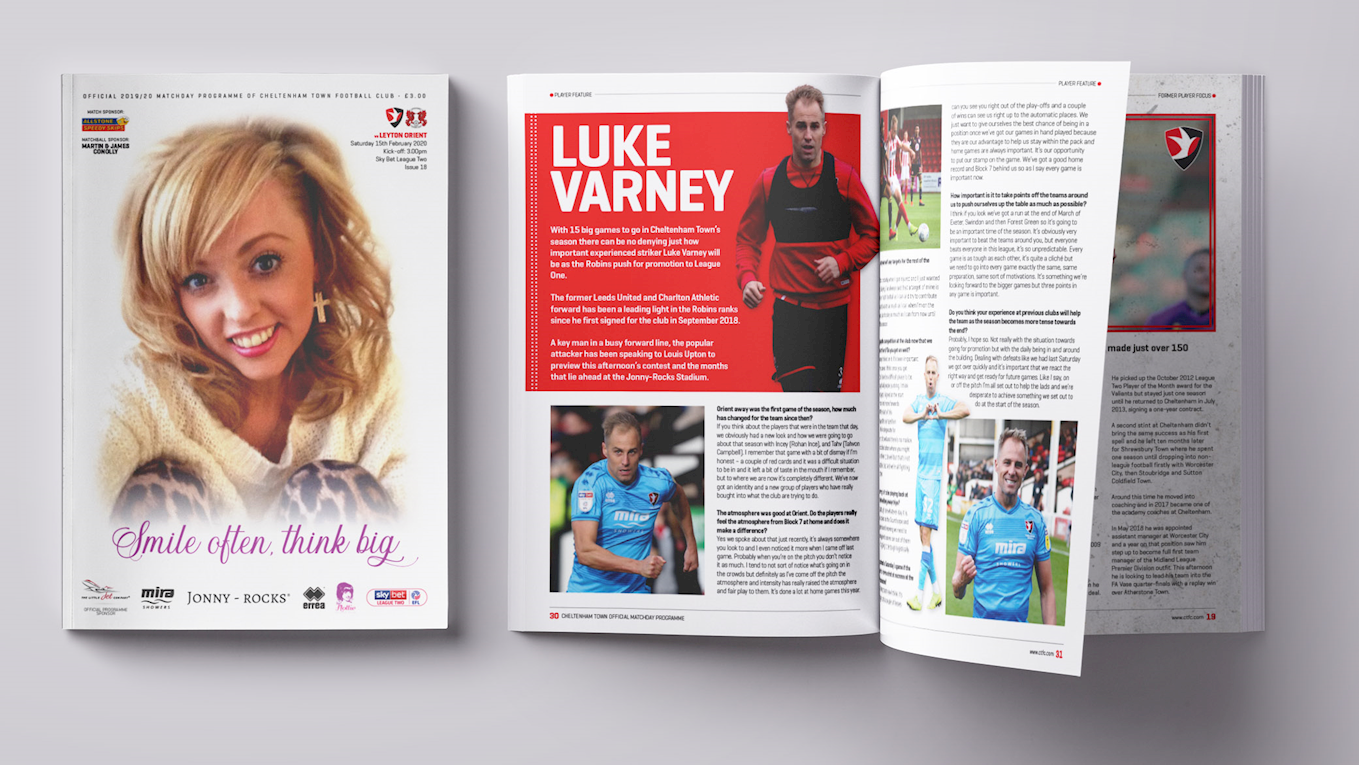 Stay up to date by following @CTFCofficial on Twitter for team news, match updates and photos. You can also visit the club's Facebook page for team news and score updates.

Listen to match commentary by tuning in online via iFollow. You can purchase an audio match pass for £2.50.

Post-match visit the club website to read a match report and to see the reaction from the manager.