The Robins make the long trip north to Cumbria hoping to quickly follow up the disappointment of Saturday's loss at Scunthorpe with a good performance to add to the points total that has seen Michael Duff's side acquire a play-off spot with 16 games left to go this season.

The defeat at Scunny has left the squad desperate to get back out on the pitch so they can respond quickly.

Carlisle, as they have so often proved in the past, will provide a stern test. However with three consecutive home games coming up the Robins will be hoping they can make an impression on the road ahead of the next away match at Colchester United at the end of the month.

George Lloyd and Scott Flinders remain out of action due to injuries. Chris Clements has returned to training following a recent illness.

Rhys Lovett is back in contention after his recent loan spell at Tiverton Town came to an end.

Defender Charlie Raglan has also been looking ahead to Tuesday's encounter.

Unbeaten in five games, Carlisle have shown some positive recent signs on the form front as they look to push further up the League Two table.

The Cumbrians occupy 20th spot in League Two ahead of Tuesday's meeting but are showing signs of progress under Head Coach Chris Beech who has been in position since late November at Brunton Park.

On Saturday they held league leaders Swindon Town to a 1-1 draw, while in their last five games they've also drawn with Mansfield Town and Oldham Athletic, as well as recording wins over Walsall and Forest Green - the latter being a 4-1 midweek success.

In goalkeeper Adam Collin they have a hugely experienced shot-stopper who also serves as their captain. The 35-year-old, who was born in nearby Penrith, is in the second spell of his career with Carlisle.

Defensively ex-Everton youngster Gethin Jones, former Millwall man Byron Webster and January arrival Nick Anderton from Blackpool have all contributed to limiting the goals that have been conceded in their recent unbeaten run.

In midfield experience comes from the influence of Mike Jones and Sheffield United loanee Nathan Thomas, with Elliott Watt and Jack Bridge also options in this department.

A warm Tuesday night back in August, in what was only Cheltenham's second home match of the season, saw two first half goals earn the Robins a 2-0 win over Tuesday's opponents.

It was 2-0 on the stroke of half time when Chris Clements stunning pass fed Luke Varney, and the experienced hit man finished confidently to seal what would be a second consecutive home win.

Revisit the highlights from that game below:

Supporters can purchase tickets ahead of the trip from the ticket office in advance.

They are also available from Carlisle this evening. Prices go up by £3 in all categories except for children tickets.

Robins fans booked on the Travel Club coach are advised it'll be leaving for the game from the Jonny-Rocks Stadium car park at 12.30pm.

Watch the game live on iFollow

Tuesday's match is being broadcast live on iFollow. Pay only £10 to watch the whole match live.

It's available to stream on your computer, tablet or smartphone.

Purchase a match pass for £10 and don't miss any of the action from the comfort of your own home or if you are out and on the move. 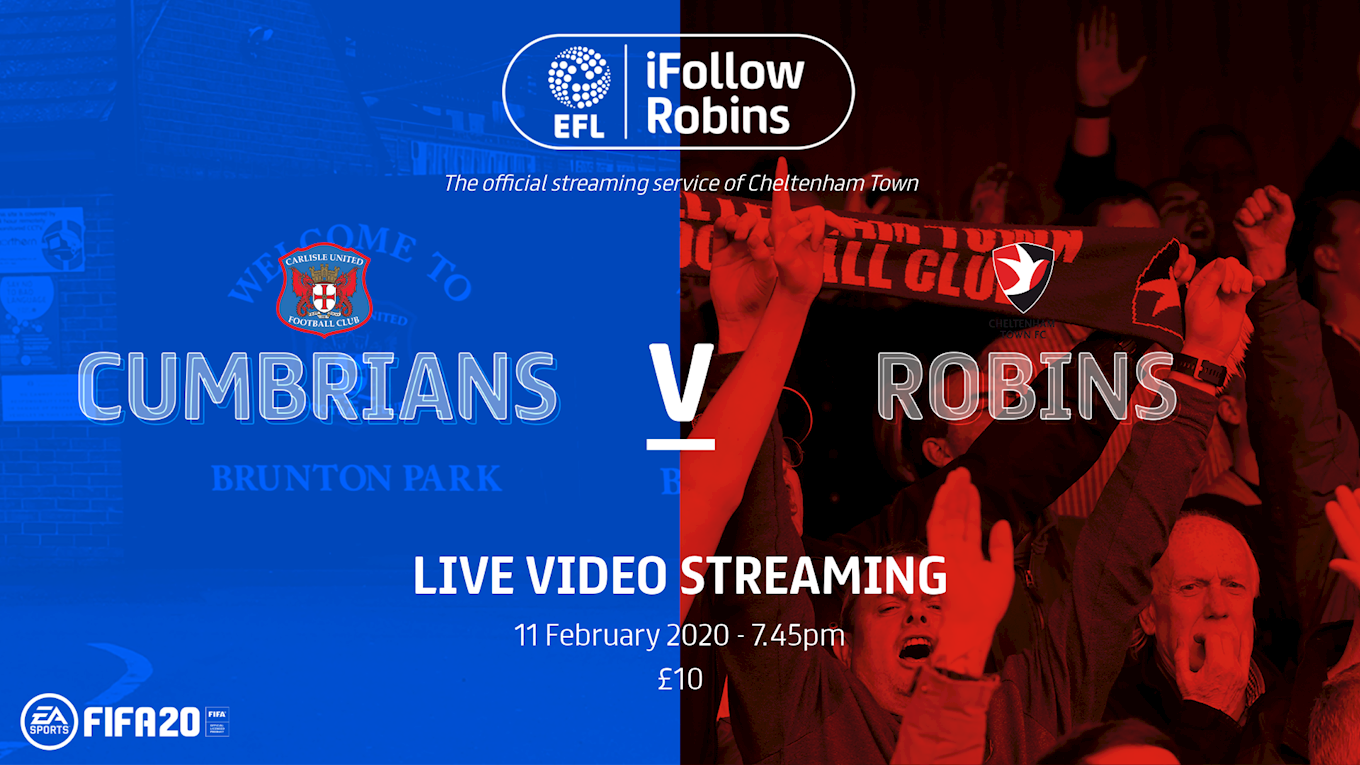 Check out updates throughout the night on social media by following @CTFCofficial on Twitter. You can also view score updates on the club's Facebook page.

Watch the match by purchasing a match pass on iFollow for £10. Listen to full match commentary too with an audio match pass.

Post-match you can check out the club website to read a report and see reaction from the manager and one of the players.