The Ladies are on course to win the county competition once again after securing a double figure win against a team operating three divisions below them.

Having been left frustrated by postponements throughout the season because of bad weather, an opportunity to showcase his team’s talents on a 3G pitch was a welcome sight for Cheal as his team look to record one of their highest ever league finishes in the FA Women’s National League South West Division this season.

There are a few leagues apart between yourselves and Pucklechurch and that obviously showed. Is that what you expected in many ways?

It’s always tough to motivate as a group of players a fixture like that but the girls did it really well to be honest. We had a few things to say at half time about conditioning the game to their level and they did that second half. It’s just about getting through it as bad as that sounds really. We aren’t able to mix up the squads in this cup so we’ve gone full strength and unfortunately the leagues do show. It is still a good run out and it’s needed before next week.

How did you see the mindset of your squad going into the game and perhaps when they were in it as well?

It’s been quite a difficult few weeks. We’ve been using a lot of the younger ones and since they couldn’t play we had 12 available because three or four of them are cup tied and had played for the reserves. The mindset was just really about getting minutes into legs and being really positive with everything that we did. They’ve done that tonight. A lot of the goals were very good goals which even at our level would be right for that level so we’re happy with the performance overall.

How have you found the situation with the bad weather and the impact it has had on your season?

It is the worst because you can’t get into a rhythm. I think we’ve worked out that we’ve got 13 left with now the cup fixtures added in. That’s a lot of games to fit in before the end of May. It’s going to be coming thick and fast and we’ll be expecting high levels from players for those games, whereas they’d normally be spread out and you’d get through the odd blip. We’re now expecting them to perform at a high level. There’s no let up for us really and second is hopefully still on the cards – that’s our aim.

With your technical ability do artificial surfaces actually suit you in terms of being able to use the ball better than perhaps on a grass surface at times?

We love Saracens but we would choose this over anything any day. It suits our technical players and you can see the speed that we have going forward that they love playing on this as well. These pitches have become the norm for anyone really so any time we get the opportunity to play on them we will. We were saying actually before half time that if it was on a grass pitch tonight it would have been a much lower score line because it becomes a lot easier for opposition. It’s always brilliant to play here and play on 3G.

There were many stand out performances against Pucklechurch, but Georgia Brown (pictured) in the middle of the park justified why she has earned a call up to the Scotland under-19s squad. What have you made of her call up?

It’s been great to be a part of her journey. She was watched by England last year, missed out on that opportunity and has really snatched at this one and learnt probably from last season. It caps off a really positive year for her as a player. She’s got two or three years now within that age group to really develop. She’ll go onto bigger and better things and we’re just delighted to be a part of that. 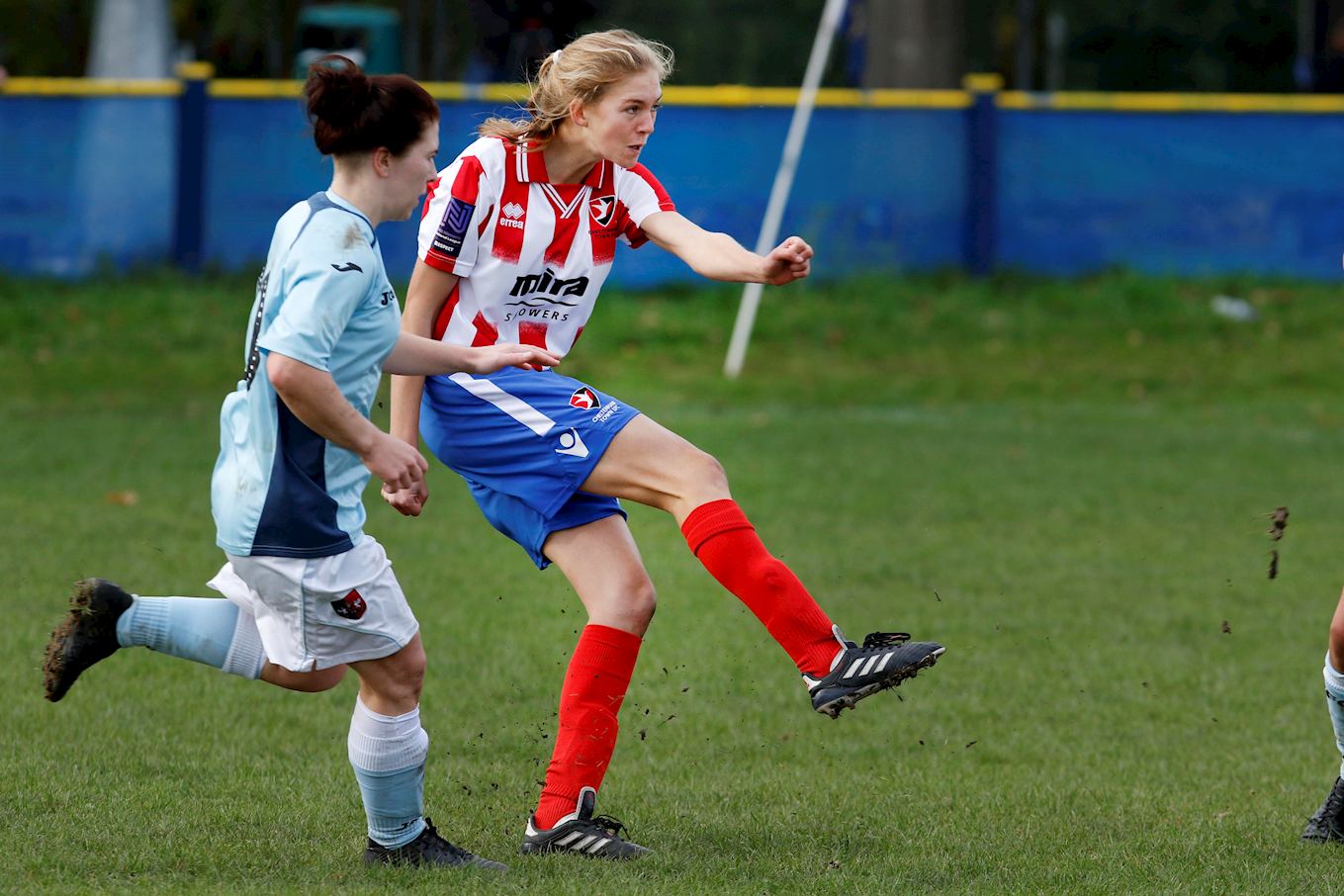 She’s still very young but she plays more maturely than she did a few months ago?

She’s 17 years old and she was 15 when she initially came to us and turned 16 before she made her debut. She’s still got a lot to learn and a lot to grow into. Her technical ability will continue to flourish. She’s fantastic, mature beyond her years, and a real player that hopefully we can keep an eye on moving forward at a bigger and better level pretty soon.

Sarah King has just returned from international duty with England Colleges and came on and affected the game, particularly in a forward position in the second half. What have you made of her coming off the plane and straight into it?

She had three games in three days which we were mindful of – very similar to Georgia last year where Georgia burnt out around this time last season. We’ve made the decision that we’ll look after Sarah and learn from that scenario from last year with Georgia. Sarah is brilliant. She wants to play every minute of every game, as does any young player, but we’ve got to look after her and we’re going to tailor her training so we can get the best out of her matches. The young ones are an example for everyone.

Swindon Town next time out – that’s a fairly local test compared to some of the games you have to travel to?

It is always nice to play the local ones. It was originally scheduled to be a midweek fixture but is now coming on a Sunday. It’ll be an exciting one. Local derbies are always the best ones and Swindon is no bigger really. For the likes of Georgia and Sarah their local team really – it’s a team that they grew up playing for. A lot of our players have a lot of history between the two clubs so it’ll be a good one. Hopefully we can get quite a few through the door and it’s back to League action.

Sunday's fixture against Swindon Town Ladies will be taking place at All Saints Academy on Blaisdon Way (GL51 0WH) on the 3G surface.

Check out the latest league table from the FA Women's South West Division One.