A win which means that the club receive a valuable cash sum of around £900.

Makeshift wing-back for this game Billie Haynes opened the scoring for the Robinesses in the 34th minute, but a penalty in added time meant that the Robinesses had to do it the hard way.

Post-match, manager Tom Davies was "lost for words" on what unfolded on the pitch.

“And everyone who’s come of the pitch has said that. A penalty shoot-out is never the nicest way to win, but it’s difficult when that has to be the situation.

“No matter what could have happened in the penalty shoot-out, I let the side know how well they played today and we know where we are at as a team.

“It was great to be back and nice to win the penalty shoot-out.”

The Gloucestershire based side arrived at a rather rainy Exeter full of positivity and hope as Davies’ side were looking to continue the positive winning momentum which was halted by the second lockdown.

Manager Davies adopted a new formation looking to outsmart Exeter City to a place in round two.

And you could tell that the team knew how to deal with Exeter’s early attacking threats with the diligent defending that was on display at the Exwick Sports Hub.

The counter-attack was the key for the Robinesses to make the breakthrough in this heated contest on the South Coast.

Jade Grove and Billie Haynes’ combination down the left resulted in the latter powering her effort beyond the onrushing goalkeeper and into the back of the net to make it 1-0.

1-0 was the score going into half-time, with the Robinesses having control of proceedings but fully expecting Exeter to go up another gear in the second half.

Unsurprisingly the hosts found that higher gear and ramped up the pressure on the visiting Robinesses as the second half progressed.

This also wasn’t helped by the fact that forward Jade Grove was badly injured after being shoved into the fence surrounding the pitch by one of the Grecian players.

From first viewing it looked like Grove dislocated her shoulder, but scans soon will reveal the extent of how bad the injury was.

Unfortunately, despite her best efforts to continue, the in form striker just couldn’t go through the pain no more with forward Lauren Kayll coming on in her place.

“She looked in pain,” Davies explained when describing Groves' injury. “I’m not quite sure what the situation is at the moment. I think we are going to take her to hospital and get her checked out.”

He went on to add: “We will see how she is after that and hopefully assess things more when we find out more.”

Three wonderful saves from goalkeeper Robyn Levett kept Cheltenham in command for what looked like being a priceless 1-0 victory.

However, a misjudged tackle in the 89th minute from defender Sammy Hallsworth on Exeter’s Connie Pengelly offered the home side a lifeline from the penalty spot.

A lifeline which was taken by Abbie Britton who slotted her effort into the back of the Cheltenham net despite the best efforts of Levett to keep the penalty strike out.

It was all then about the mentality of the team. Could they pick themselves up or would they fold in this situation conceding an equaliser so late on?

The answer to this question came about in added time with Abby Bevan scoring what looked like the winning goal. But after deliberation with the linesman, the goal was ruled out for Lauren Kayll’s apparent involvement from an offside position.This being despite the forward not making a direct move towards the ball when the ball was played in behind the defence. 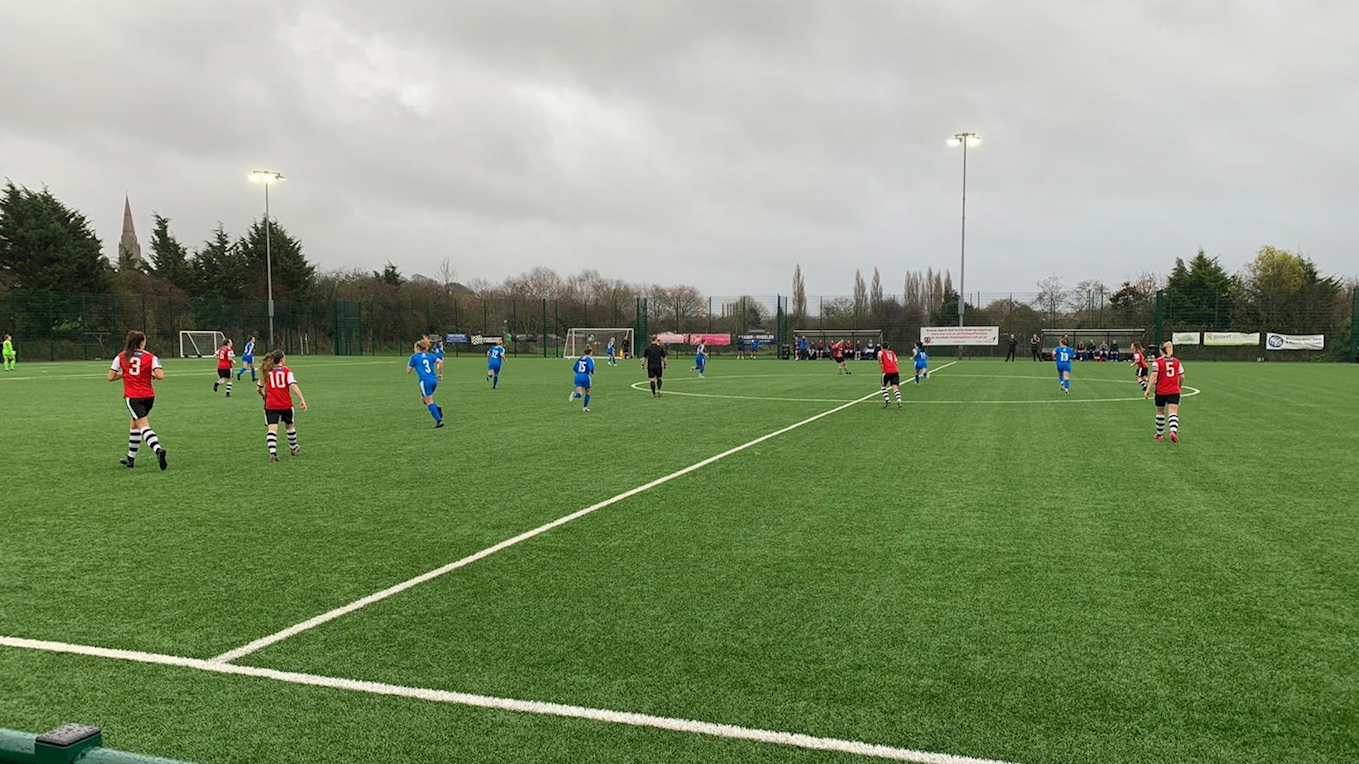 It was a decision which infuriated Davies at the time and all the Cheltenham fans who made the long journey down to Devon.

“I think it’s difficult to explain what went on there,” Davies said. “They have obviously flagged for Lauren being offside on the fact of being involved in the play.

“It’s unfortunate as we really built in a really good way and Lauren made her first run and checked back to make sure that she was onside, and the ball was played to somebody else.

“Abby’s made a fantastic run and a fantastic finish, and we thought that was enough, but unfortunately Lauren was seen to be engaging in play so we have to take it.

“Even if it’s positive or negative, we had to move on and as I’ve said, the group were fantastic and we responded really well.

“We didn’t just sit back after that. We brushed ourselves down and went again and worked really hard, so it is what it is.”

With that being another decision going against Cheltenham, it just felt like it was going to be one of those days where everything went against the Robinesses.

But Davies’ side were determined not to let that happen. They were close to retaking the lead when a goalkeeper mishap gave Sarah King a big chance to make it 2-1, however, the forwards goal bound effort was blocked by an Exeter defender near enough on her own goal line.

Then it was Cheltenham’s turn to suffer a scare with Britton’s shot from outside the box hitting the base of the post.

Despite it being end to end, no team could find a goal in extra time, resulting in the contest going to a penalty shoot-out.

Amazingly, Cheltenham scored all their penalties with all of Charlotte Criddle, Billie Haynes, Rebecca Halford and Abby Bevan keeping their composure from the spot.

This meant that goalkeeper Levett either had to save one or hope that an Exeter player would miss it in order for the Robinesses to go through.

Coincidentally both instances happened. Levett saved Exeter’s fourth penalty, and the penalty to keep the Grecians in the shoot-out was missed by Anthea Kaptein to the delight of everyone associated with Cheltenham.

A big victory with big financial implications which will help the club during these difficult covid times where finances are tight.

More money will be available to compete for when the Robinesses compete in the second round of the Vitality Women’s FA Cup. They have been drawn to take on Portsmouth in the next stage of the competition.

In terms of the next game for Cheltenham, Davies’ side face the daunting task of taking on runaway league leaders Southampton FC at the Big Local Stadium.

The date for the game is Sunday December 20, with kick-off being at 2pm.