Bolton Wanderers are the visitors to the Jonny-Rocks Stadium on Tuesday night for Cheltenham Town's penultimate home game of 2020 (kick-off: 7.45pm).

Unbeaten in six League Two outings, a Bolton side looking to bounce straight back into League One will provide a stern test as supporters once again return to see the Robins in action.

The Trotters boast a squad full of experienced and promotion winning players at this level.

However with an eye on top spot, and with confidence high, Michael Duff's men will fancy their chances on home soil of producing another good performance.

With an increased number of fans set to attend the fixture, please can all supporters before making the trip read the matchday information about the game, and remember to bring a face covering, otherwise you will be denied entry.

If you are not in attendance at the game but still want to see the action unfold you can purchase a match pass to watch the whole match online with iFollow.

All players came through Saturday's draw at Salford okay which means only Conor Thomas, Chris Clements and Sean Long will be missing from the squad. Scott Flinders also trained on Monday after picking up an injury in training on Friday.

Watch Michael Duff's press conference as he previewed the game on Monday.

Tuesday's opposition boast a number of strong names at League Two level. Their squad includes players who have played further up the pyramid too, including goalkeeper Matt Gilks, who previously spent time at Blackpool at the top level.

The 38-year-old is a former teammate of Michael Duff's at Burnley and has recently come into the Bolton side having displaced Billy Crellin, the 20-year-old on loan from Fleetwood Town.

Their defensive structure includes another Blackpool man in the shape of 34-year-old Alex Baptiste, Welshman Gethin Jones, Irishman Ryan Delaney and the likes of Luton Town loanee Peter Kioso, though he may be unavailable through injury, and summer signing Jamie Mascoll.

Further up the pitch in midfield the threat carried by Antoni Sarcevic will have to be noted. He helped Plymouth Argyle into League One from the fourth tier last season, while Ali Crawford, a former teammate of Alfie May and Matty Blair's at Doncaster Rovers last season, also keeps them ticking.

Ian Evatt took charge at Bolton in the summer after leaving his post at Barrow who he had led to promotion to the Football League as National League winners last term.

The 39-year-old's first initial spell as a manager was as caretaker at Chesterfield but he couldn't stop the Spireites from being relegated out of the EFL in his time in charge.

He ended his playing days with Chesterfield too, spending five seasons with them at the end of a career as a central defender that saw him turn out for the likes of Derby County, Northampton, QPR and Blackpool.

His assistant is ex-Sheffield Wednesday man Peter Atherton who was also his number two at Barrow. 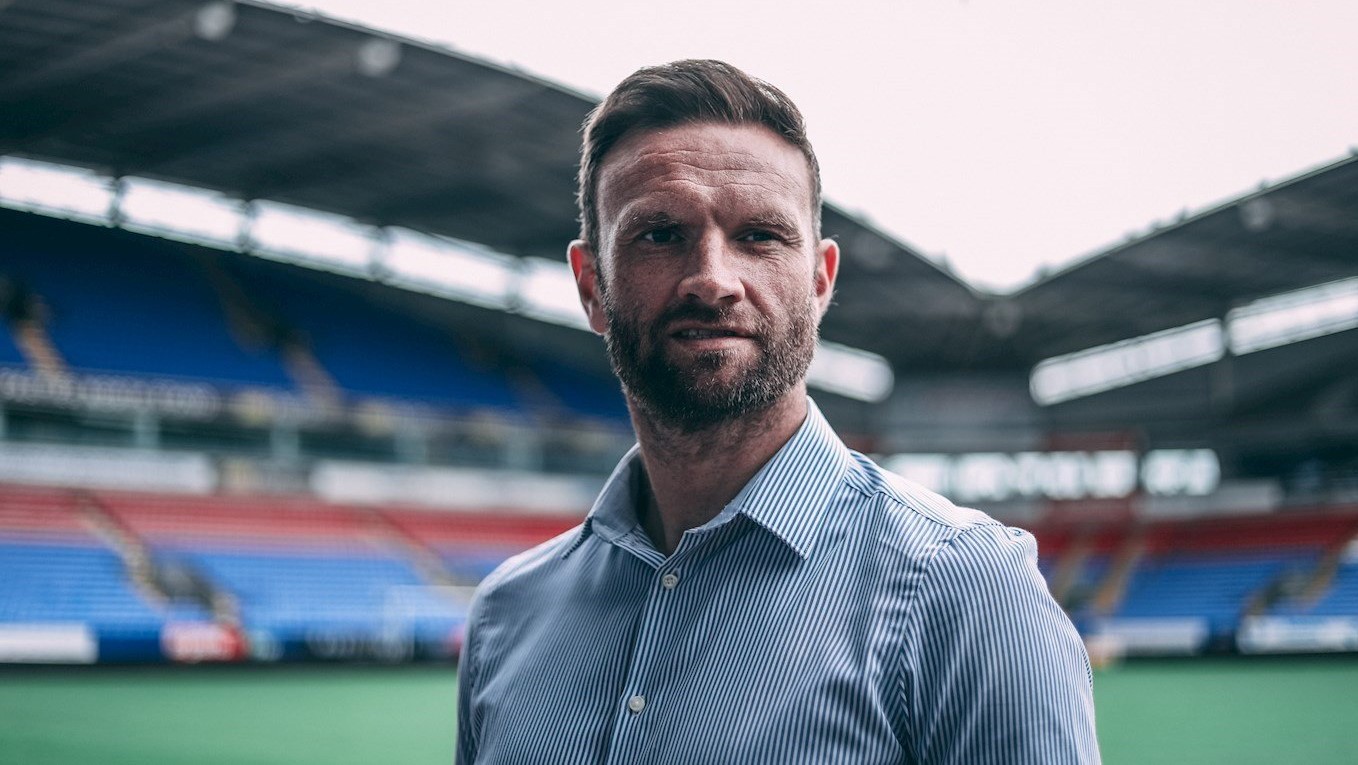 One to watch: Eoin Doyle

Last season's top goal scorer in League Two elected to stay in the division by joining Bolton in the summer from Swindon Town where his goals had helped the Wiltshire club gain promotion to League One.

He signed a three year deal upon his arrival at Bolton with the Irishman boasting extensive Football League knowhow from spells at Bradford City, Portsmouth, Oldham Athletic, Cardiff City and Chesterfield previously.

He has also played in Scotland with Hibernian having started his playing days in his home country of Ireland where he represented Shelbourne, Shamrock Rovers and Sligo Rovers.

So far this season he has eight goals to his name and has found the back of the net in his last three appearances. 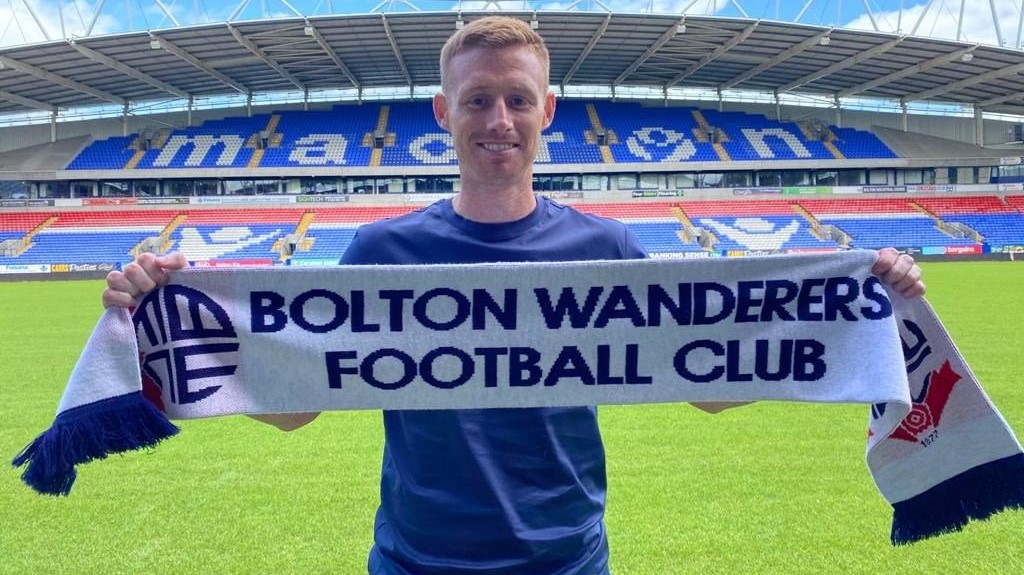 The match programme for Tuesday's game is available to buy online and can be purchased as either a 24 page print copy or a 48 page digital edition.

Inside the programme the big interview is with on loan goalkeeper Josh Griffiths as he reflects on his time at the club so far, why loan football is so crucial for him, his experiences as part of the England youth set-up and trying to plot a way through to the first team at parent club West Brom.

You can also read interviews with George Lloyd and Matty Blair while under-18s midfielder Connor Jakeways features from the academy.

There's also the latest thoughts from Michael Duff, a look back at the only previous meeting with Bolton, our regular quiz, the latest from Cheltenham Town Ladies and more.

The programme can be bought online for £2.50 for a print version and £2 for a digital copy. A limited number will also be available to buy from the temporary club shop in the main bar for attending supporters. 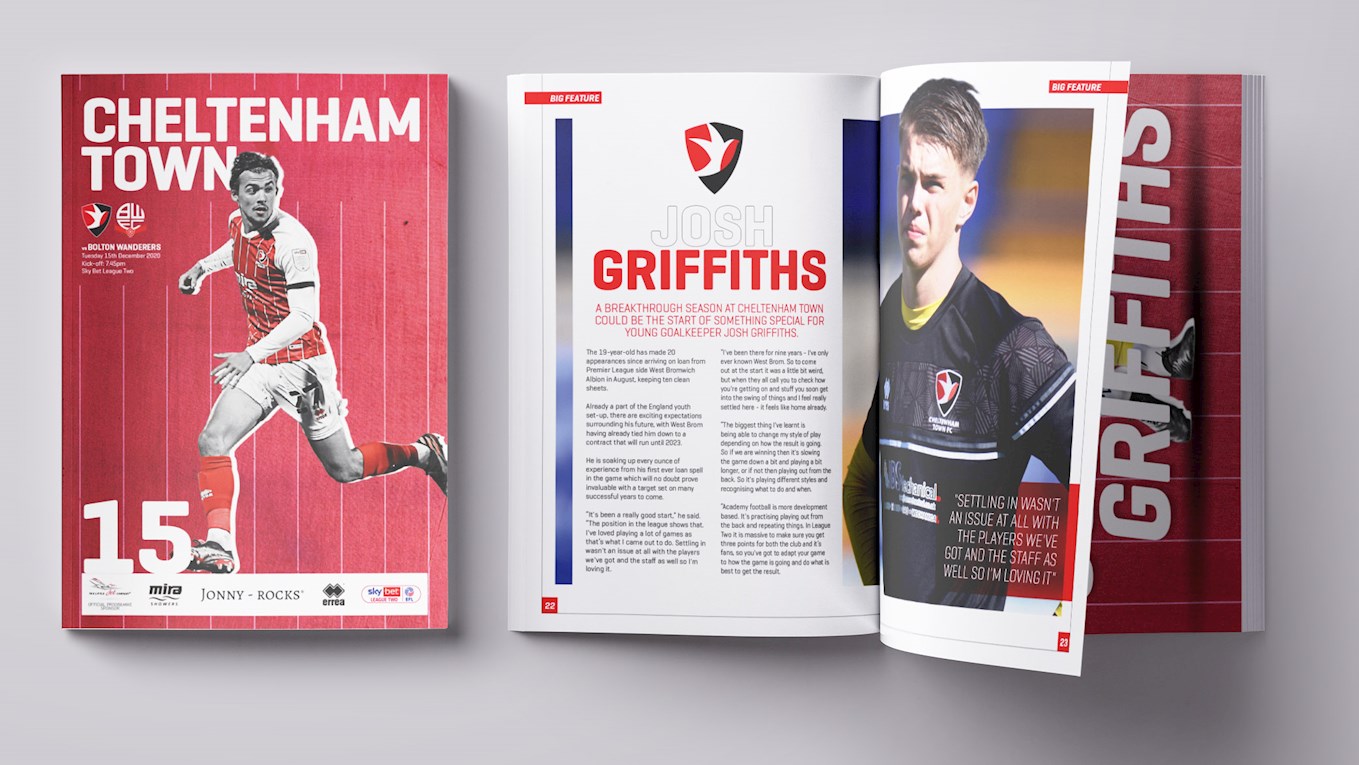 With tickets sold out for the fixture, the best way to keep an eye on all of the action is by purchasing a match pass for iFollow.

You can subscribe online and watch the game from the comfort of your own home. A pass is available to buy online for £10. 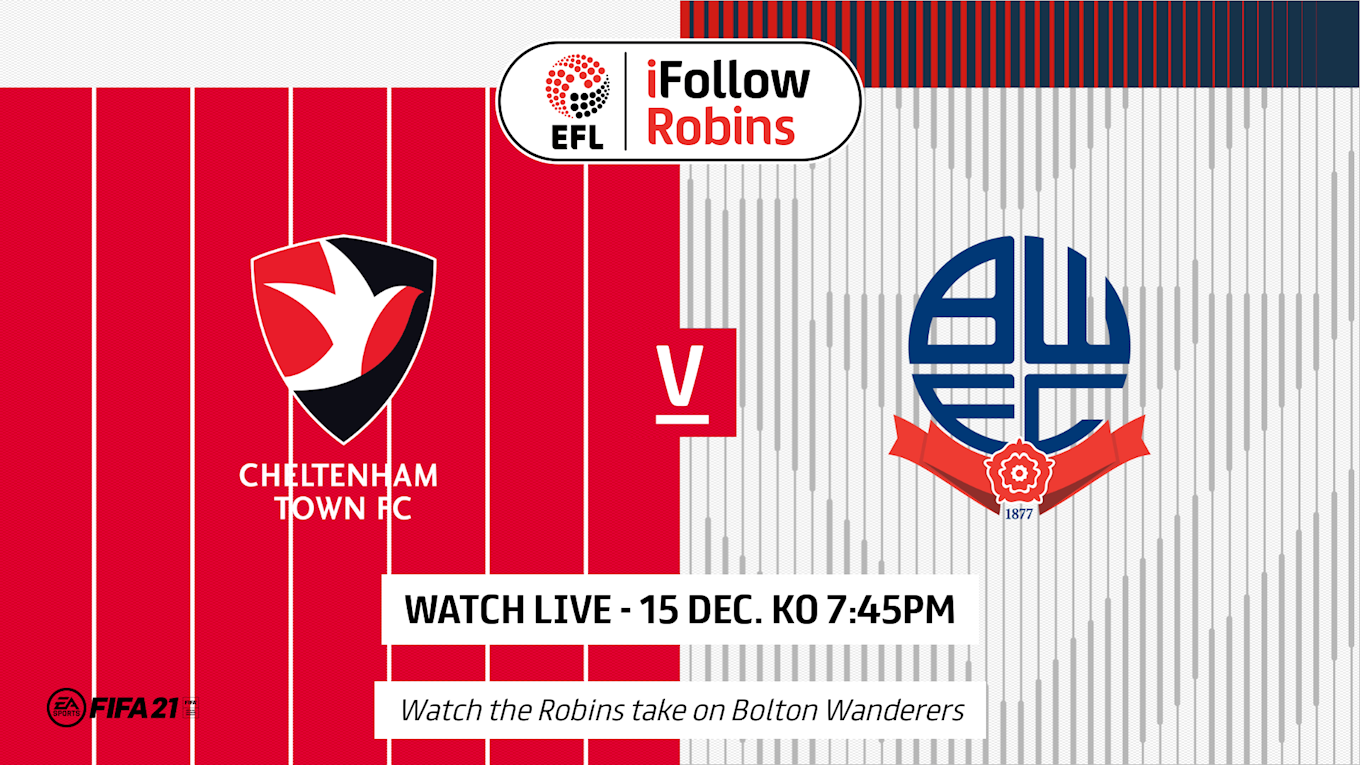 Post-match visit the club website to read a match report and to hear reaction to the result.

After the game you can also view extended highlights on iFollow - online and on the EFL iFollow app.