Josh Griffiths recently registered his tenth clean sheet for Cheltenham Town since joining the club on a season-long loan deal from West Bromwich Albion in the summer.

The highly thought of 19-year-old has been Cheltenham's incumbment between the posts since he arrived in Gloucestershire for his first loan spell away from the Hawthorns.

He reached the ten clean sheets milestone in the goalless draw at Salford City having made 22 appearances in all competitions for the Robins so far.

The Herefordshire based stopper has been sitting down to discuss his time at the Jonny-Rocks Stadium, his experiences as part of the goalkeeping set up at Premier League West Brom and his international ambitions following his recent involvement with the England under-20s squad in November.

How would you assess your time at Cheltenham so far?

It's been a really good start. The position in the league shows that. I've loved playing a lot of games which is obviously what I came out to do. Settling in wasn't an issue at all with the players we've got and the staff as well so I'm loving it.

The biggest thing I've learnt is being able to change my style of play depending on how the result is going in that game. So if we are winning then it's slowing the game down a bit and playing a bit longer, or if not then playing out from the back. So it's playing different styles and recognising when you can play out and when you can't.

In academy football would it be the same thing over and over as opposed to being able to adapt your style?

Yes academy football is more development based. It's practicising your playing out from the back and repeating things. In League Two it is massive to get three points for the club and fans so you've got to adapt your game to how the game is going and do what is best to get the result.

Has anything surprised you from your time at Cheltenham so far?

I wouldn't say surprised me no. Your thoughts before you come out to League Two is that it's very direct and some people say the standard is not as good as what you're used to but I disagree with that massively. I think a lot of teams look to play good football and I've been really impressed with the standard. Each team has different qualities so every game so far this season has been a massive challenge and I'm sure that will stay the same. 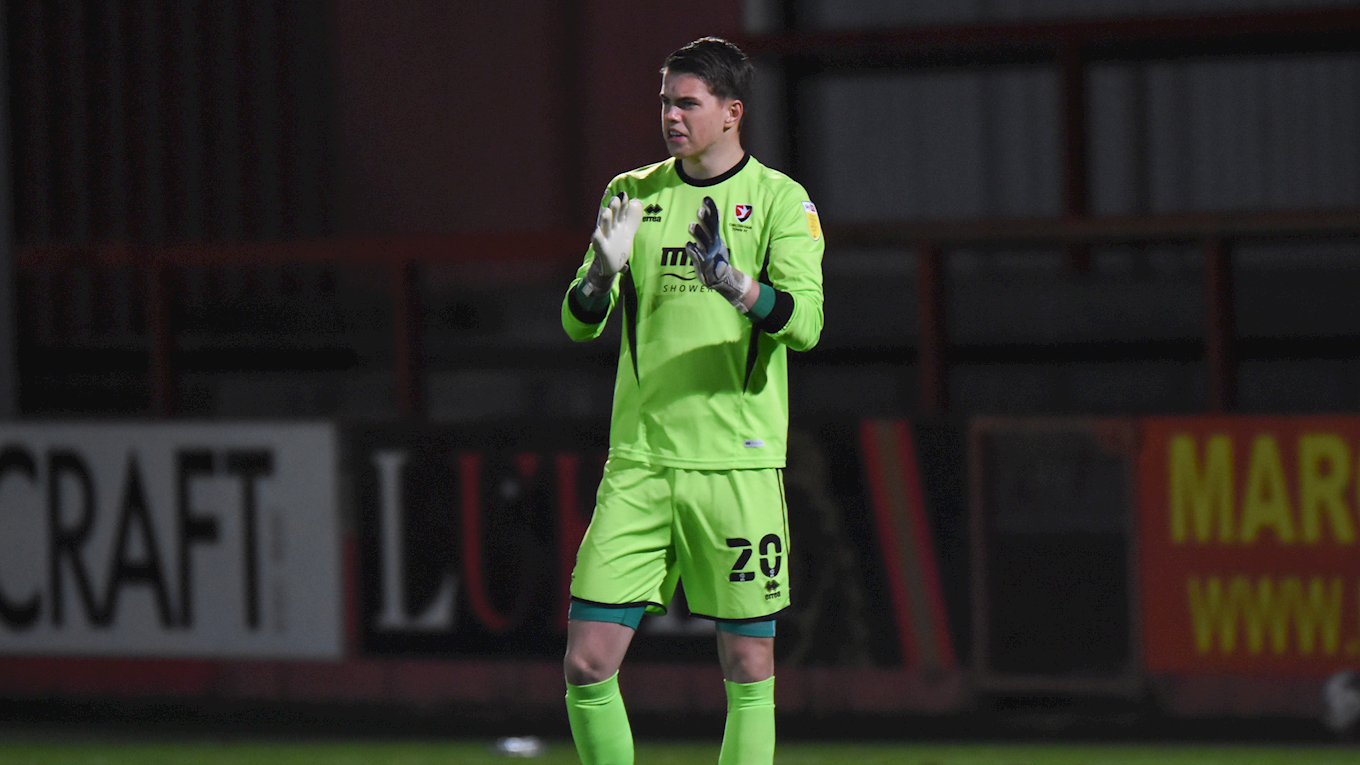 Suddenly with Scott Flinders coming back fit there's increased competition for your spot. How have you found having another goalkeeper pushing you for your spot?

I think it's a positive to have competition. I can only speak for myself but me and Scotty get on really well. He's been great with me ever since I've come in and now he's back into training it's great for me. He's pushing me and I like to think I'm pushing him to improve.

As a goalkeeping team are you quite a team have you found so far?

Yes definitely. We always work hard and get our work done but then we can have a laugh and a joke as well. Booky (Steve Book), Max (Harris), everyone has been great, and we all push each other to improve.

How back at West Brom have you found working with Sam Johnstone, Jonathan Bond, David Button and Alex Palmer? That's quite a big contingent of quality goalkeepers?

Obviously I didn't work with David Button last year because he came in. But Bondy, Sam and Alex have all been great. Alex came out to League Two last year and did really well and that's sort of inspired me to come out and emulate what he did. Sam and Bondy have always been really good with me. They always come out of their way to make sure I'm alright and I still speak to them now as well as Boaz Myhill and Garry Walsh and all the other coaches. They've kept a keen interest in how I'm getting on.

How do you find working with Garry Walsh and Boaz Myhill?

Boaz recently came into the coaching so I worked with him all last season and he's been really good with me just giving me game tips because he's played as well as Walshy. They've both got qualities, I worked with Walshy every day last year and I think I improved massively under him in terms of my kicking and my crossing. I can't speak highly enough of them, they've both been great.

Is it strange being away from West Brom? You're still connected to it but you are elsewhere?

It is strange. I've been there for nine years - I've only ever known West Brom. So to come out at the start it was a little bit weird, but when they all call you to check how you're getting on and stuff you soon get into the swing of things and I feel really settled here - it feels like home already. 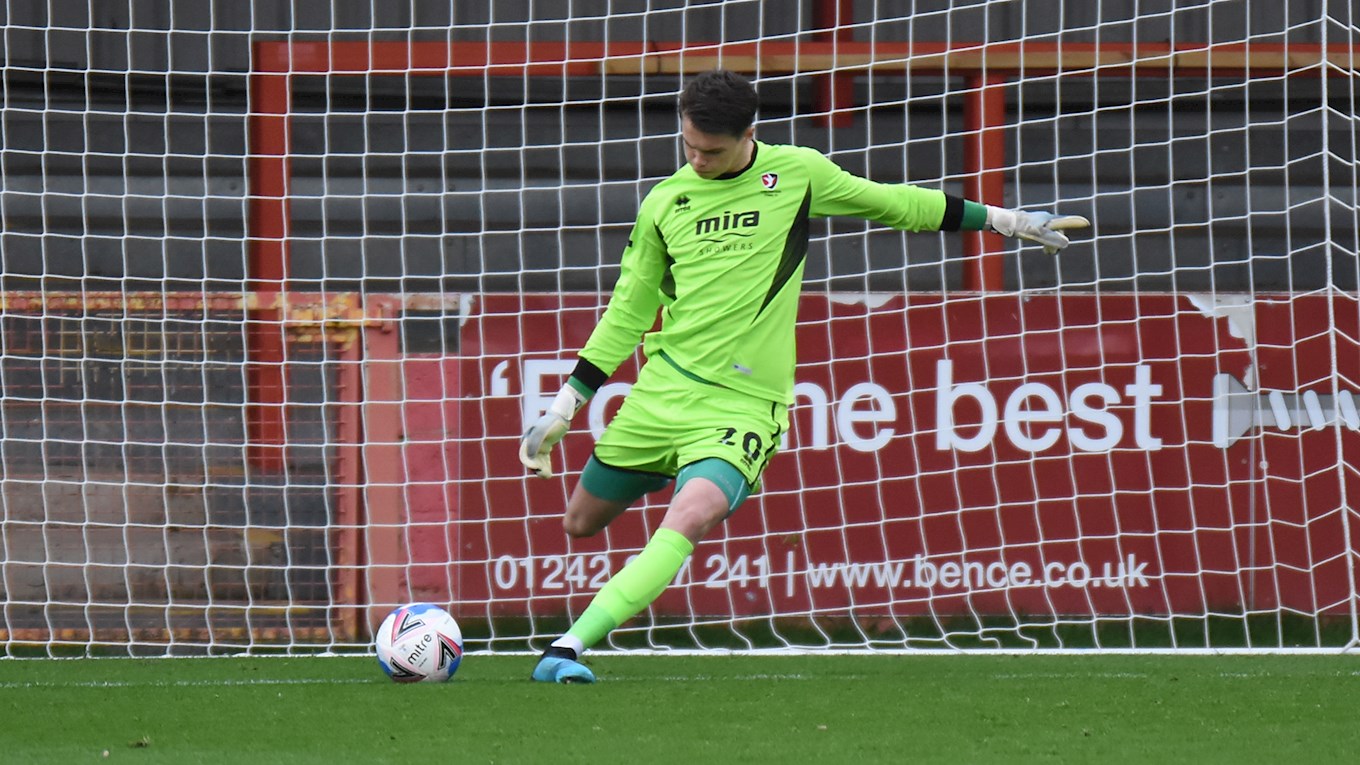 Top flight clubs have large goalkeeping departments with plenty of options. Is it hard to see the pathway through that when there's quite a lot in front of you?

Yes in a way. West Brom have a history of producing a lot of goalkeepers but not many that have played for the West Brom senior team. A lot of them get sold on or go out on loan. So I want to be the first one to go right the way through the academy and play in the first team. I think you do see a pathway, you see young lads making their debuts, and it always takes a bit longer for a goalkeeper to mature so I do see a pathway.

What did you get up to in your recent time with the England under-20s squad?

The international games got cancelled due to the pandemic so we had a four day training camp which was really good. We've got a World Cup at the end of this season so my plan is to be involved in that squad. Then we played a friendly game which was good to get used to the team. It was a good productive four days work.

You've been involved in the younger age groups before?

Do you tend to know the rest of the other players when you do that or is it all brand new every time?

The first time I went I probably knew one other lad but the more you go you see familiar faces. A lot of the lads often get called back.