Luke Varney is confident that if the club's League Two season were to resume when safe to do so that him and his teammates have the strength to fulfil all the remaining fixtures.

With the covid-19 pandemic having brought football to a halt for over a month now, it's still uncertain times when it comes to knowing when the remaining ten games still to be played this season may eventually happen.

There have been suggestions of a condensed period when matches could be fitted in and the experienced forward feels there's depth in the squad to certainly make it possible.

"If we were talking halfway through a season I think it would be too much but we can get this in," he said when speaking on the 'We Can't Read' Cheltenham Town podcast.

"I said to my wife we were due to play Friday and Monday over Easter so that was two games gone in a few days. I'm sure with the squad we've got and the situation I'm sure teams would agree to get it done as quick as possible because we all want a little bit of a break before we go into next year. I suppose we have to adhere to the government and what the rules are - we all have to buy into that and do the best we can."

The possibility of playing behind closed doors to get matches completed is an idea that has been suggested by some and Varney admits not having the backing of the supporters would be disappointing.

"To be honest most of the clubs I've been at I've had to play for the reserves so I've played a few games behind closed doors!" he joked.

"It would be difficult for us because obviously our fans are very important to us. I know it is a bit of a cliche but they are our 12th man - especially at home we've got a great home record. Maybe away from home it might be a good thing for us but especially at the Jonny-Rocks it'll be difficult if that's going to be the case. If it is the case and we have to adhere to that we'll do whatever is suitable." 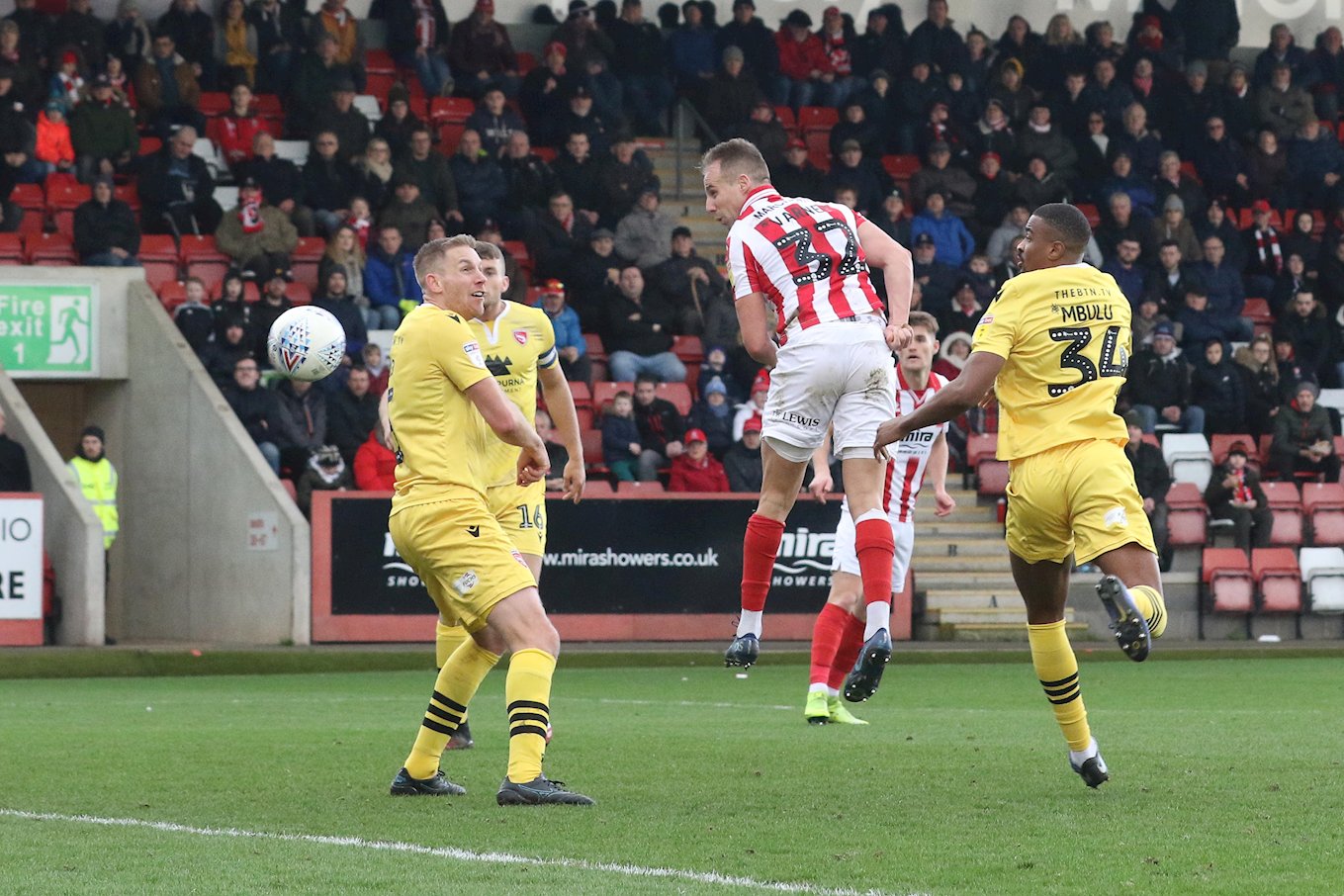 Home based training footage a number of weeks back showed Varney keeping up his fitness with a range of shirts in the background from players he's played against during a career that's seen him feature at the highest level in the Premier League.

There are a number of big names Varney has managed to snag at the full time whistle, particularly from his time spent with Blackpool in the top flight.

"I played against them but didn't get anywhere near most of them! I managed to get their shirts after the game. I'm a bit gutted now because I only did it for four or five games whereas really I wish I'd done it every game. I'm pleased with the ones I got and they're good memories - I can look back and think about those games. It's a memorable part of my career.

"I got the Gerrard one after the Liverpool game and winning there. I think the Yaya Toure one came after I gave away a penalty against him so I think he felt sorry for me! Fabregas I can remember we got brought off at the same time which was handy, so I asked him as we were going off.

"I've got a few that are sentimental - I've got a Wes Brown one that people may not think is a great shirt to have but I scored against Man United when I was at Crewe. I had about 50 odd people there that game so that was quite sentimental for me. I've got a Smalling one on my wall when I was captain for Burton in the EFL Cup at Old Trafford so again that was a bit special."

Ahead of the pause to the season Varney was carrying an injury that had ruled him out of the last played game against Port Vale, though he says he's now ready to go and wasn't too far away from being fit before the season was suspended.

"I wouldn't have been far off being fit for that Cambridge game," he continued. "I think I may have just been a few days short for that. I was due to start high speed running the week commencing that game so I was quite close to returning. Although people say it was nice because you were injured I wasn't that far off anyway so I'm in good shape. I always look after myself anyway. It's hard to replicate the football fitness. I'm in good shape myself physically. If I can keep doing my fitness work and keeping myself busy then that's the best way really.

"I've been here before when I was out of contract before I came to Cheltenham. I had five or six months on my own and I kept on it which I look back now and I'm really pleased that I was able to do that because it was quite a challenge for me and quite testing when lads were back pre-season and I was without a club."

Speaking on the 'We Can't Read' podcast, Varney also reflected on the jump he made from non-league Quorn to Football League Crewe in the early 2000s - a move that ignited a career that still at the age of 37 sees him playing League football.

"When I look back now I got released at Leicester just before the YTS forms were given out. I missed out on all of the coaching side and the academy side but I do think it has put me in good stead for life. I've experienced what it's like to work. You look now at players and they get released and they've never seen that side of it. I used to run to work for my fitness, run back, and go training. I still drive past and it's all been changed into flats and developments so it's disappointing that that's happened but I look back and I think to myself it definitely stuck me in good stead for going forward.

"I speak to the chairman at Quorn all the time about the situation. I think they wanted to take me on loan initially or just have me a couple of weeks training. The Quorn chairman was adamant that wasn't going to happen - he said if you want him you can take him. Maybe if I had gone up there on trial it might not have paid off because I can remember getting the signing done and I needed to bulk up. I lifted my first weight and I think I fell over - the lads were laughing their heads off at me.

"It didn't take me too long - I suffered a shoulder injury quite early and I was really worried about that but Dario (Gradi) gave me an extra year to let me get back going and I soon developed. I was quite lucky really. Playing for Quorn was in a men's league and I was used to getting kicked about because I was quite slight and quite quick and it really helped me adapt. The jump in level was quite huge but I still managed to score on my debut!

"You look now and Jamie Vardy has set an academy up so there's something similar but they are all at a bit of a higher level than I was. There are players now that are getting plucked out of these leagues. I say to the chairman all the time at Quorn, if you see one that's a rough diamond get them on a contract because they're just so hungry. You look at Vardy and he came from a similar background. They are just so hungry to do well and so determined.

"For me coming from a working background I was so desperate to do well in the game. I say to a lot of young players, you never know who is watching because the game I got picked up on the Crewe assistant manager was watching his son play. I was playing in that game and managed to score. He wasn't coming to watch me, it was literally luck of the draw. They told me they were coming to watch me the next game and I was terrible. I think we drew 0-0 and I thought that was probably it, but fortunately for me I did enough in the game before so we ended up getting it sorted."