Today's previously scheduled trip down the A419 to take on Swindon Town may not have gone ahead as previously planned due to the covid-19 pandemic, so we've decided to take a look back at all of the two clubs previous Football League encounters.

Since the clubs first came head-to-head with one another in the 2002/03 campaign, it's been a fairly healthy rivalry for Cheltenham having recorded 10 wins, 5 draws and only 2 defeats in encounters across league, FA Cup and Football League Trophy action.

Take a look back at each game in chronological order to see how the clubs, who are only 30 miles apart have fared against one another in the past.

Alex Addai's stunning individual finish helped Cheltenham into the FA Cup second round with a replay win at the County Ground on 19 November. The forward scored five minutes into the second half to confirm another all-League Two contest against Port Vale at the next stage of the competition.

Earlier, Scott Flinders had saved a penalty from Michael Doughty in the first half. Doughty and Jerry Yates also hit the woodwork for the home team but they couldn't find a way through. 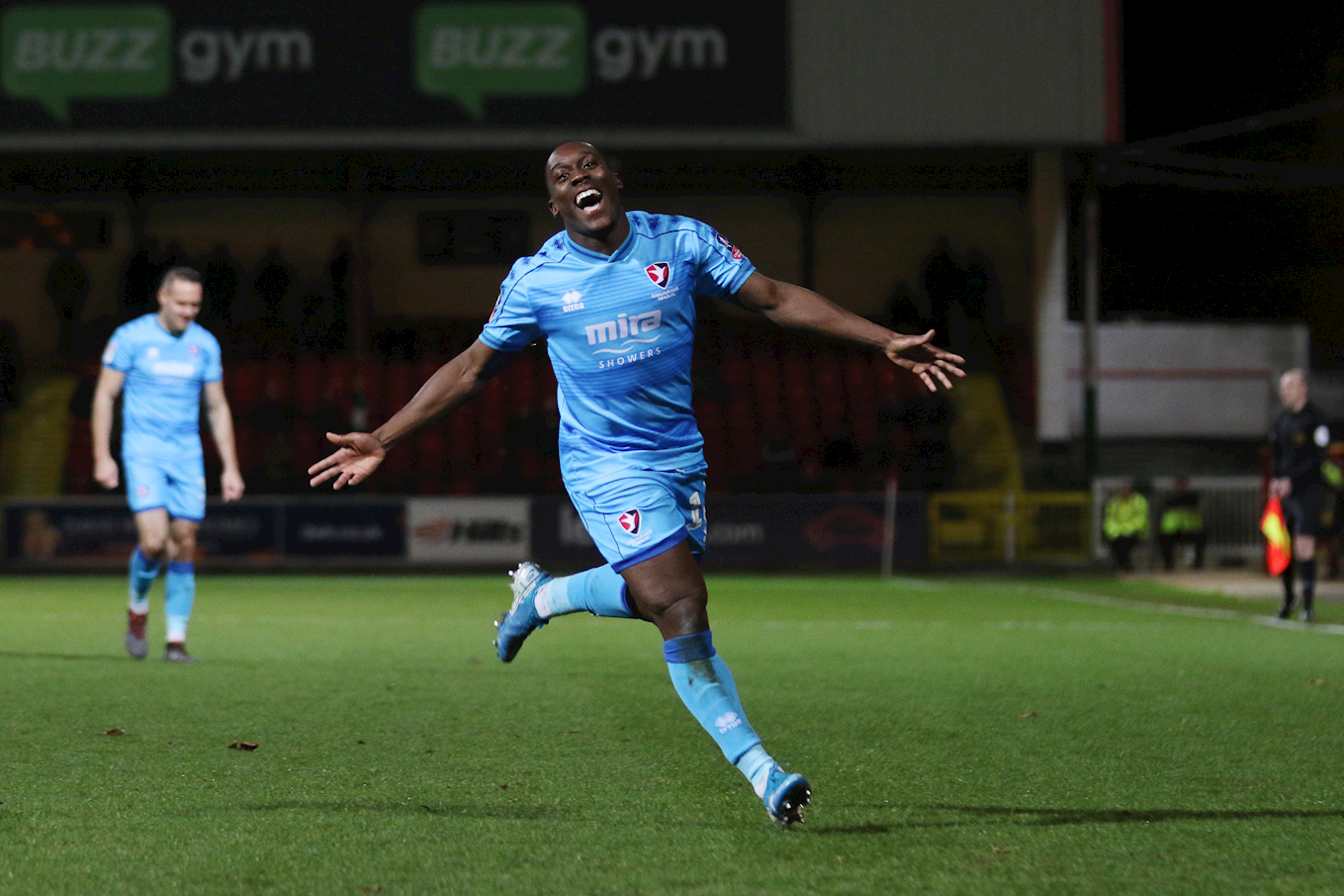 Jerry Yates' goal on 91 minutes looked to have sealed Swindon's place in the second round of the FA Cup, only for Cheltenham to go down the other end and equalise on 93 minutes.

Yates hit the post in the second half but eventually did find the breakthrough. However Swindon's celebration were short lived as Addai popped up to hammer in past Steven Benda to set up a replay ten days later. 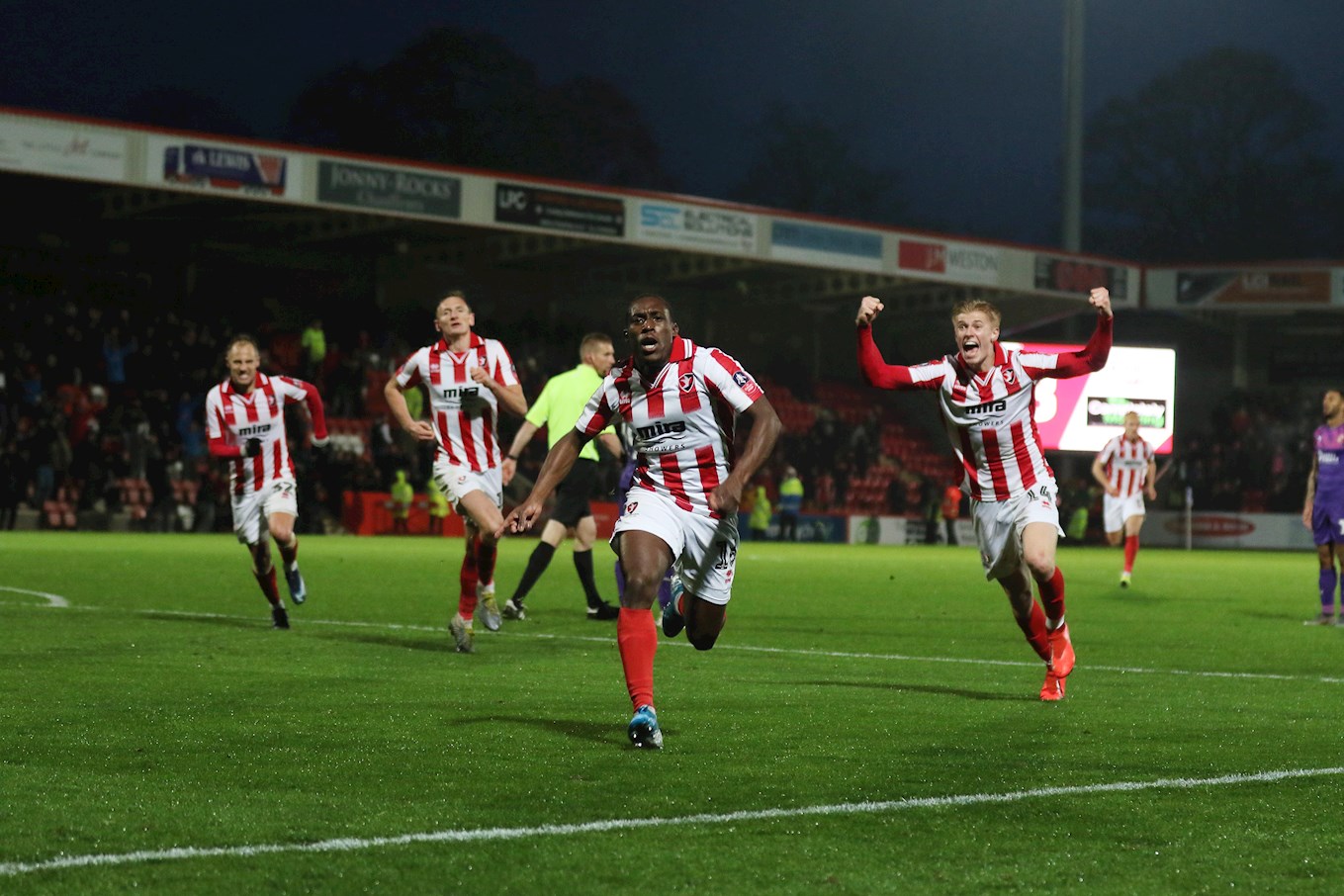 The first of three meetings so far between the Robins and Swindon this season saw Michael Duff's charges twice come from behind to earn a 2-2 draw in August.

Eoin Doyle's early opener was cancelled out by Chris Hussey against his former club, while after Doyle had restored Swindon's lead it was Luke Varney shortly before half time who again drew Cheltenham level.

Swindon had Michael Doughty sent off in the second half for a late tackle on Chris Clements. 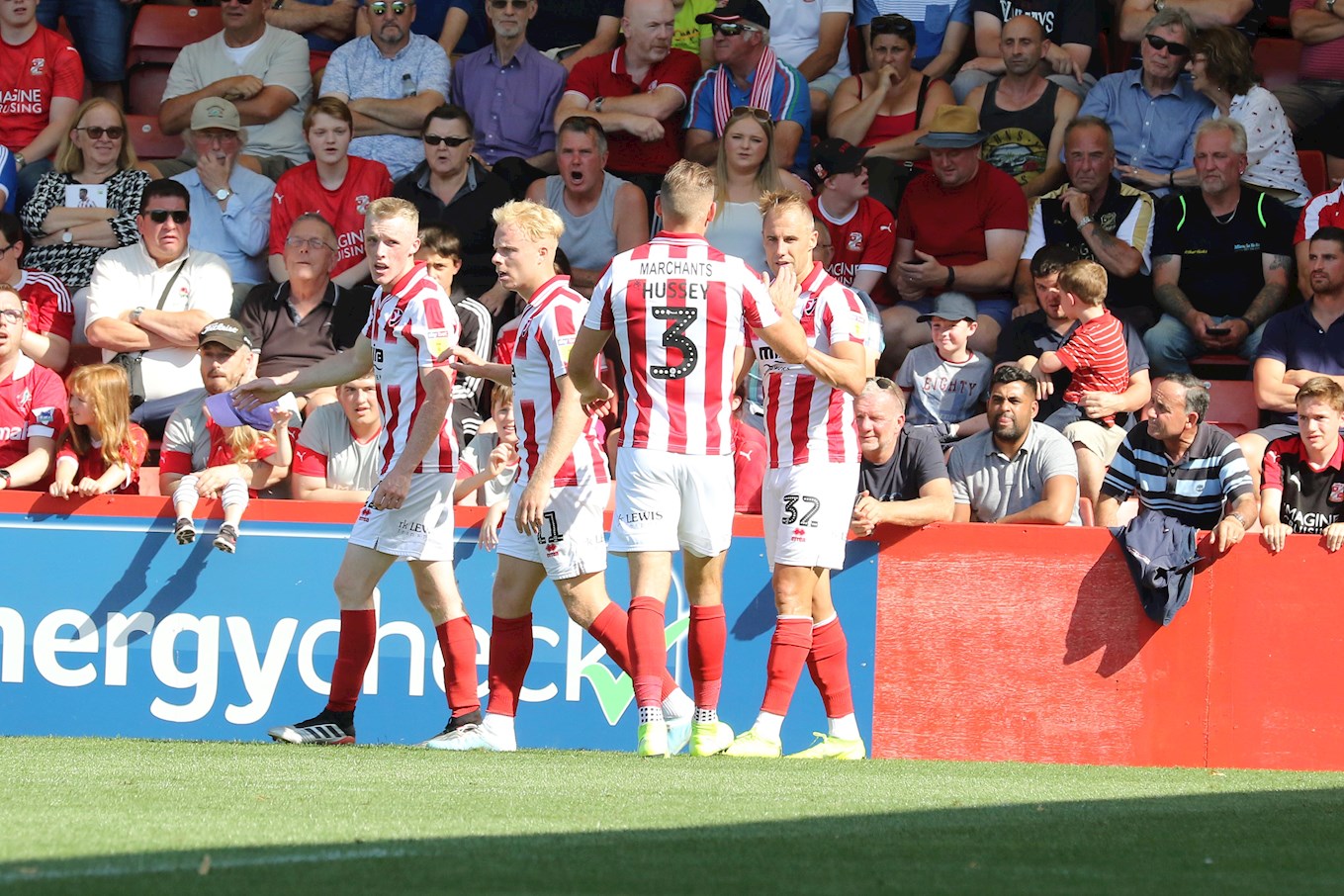 Despite threatening a late scare, Cheltenham held on for three points in the final home match of the 2018/19 season.

The Robins raced into a first half three goal lead. Luke Woolfenden scored an own goal to break the deadlock, while Billy Waters struck on the half hour mark and then Kevin Dawson shortly after.

Swindon got back in the contest late on when Theo Robinson netted, while Marc Richards also scored but it was Michael Duff's men who held onto three points. 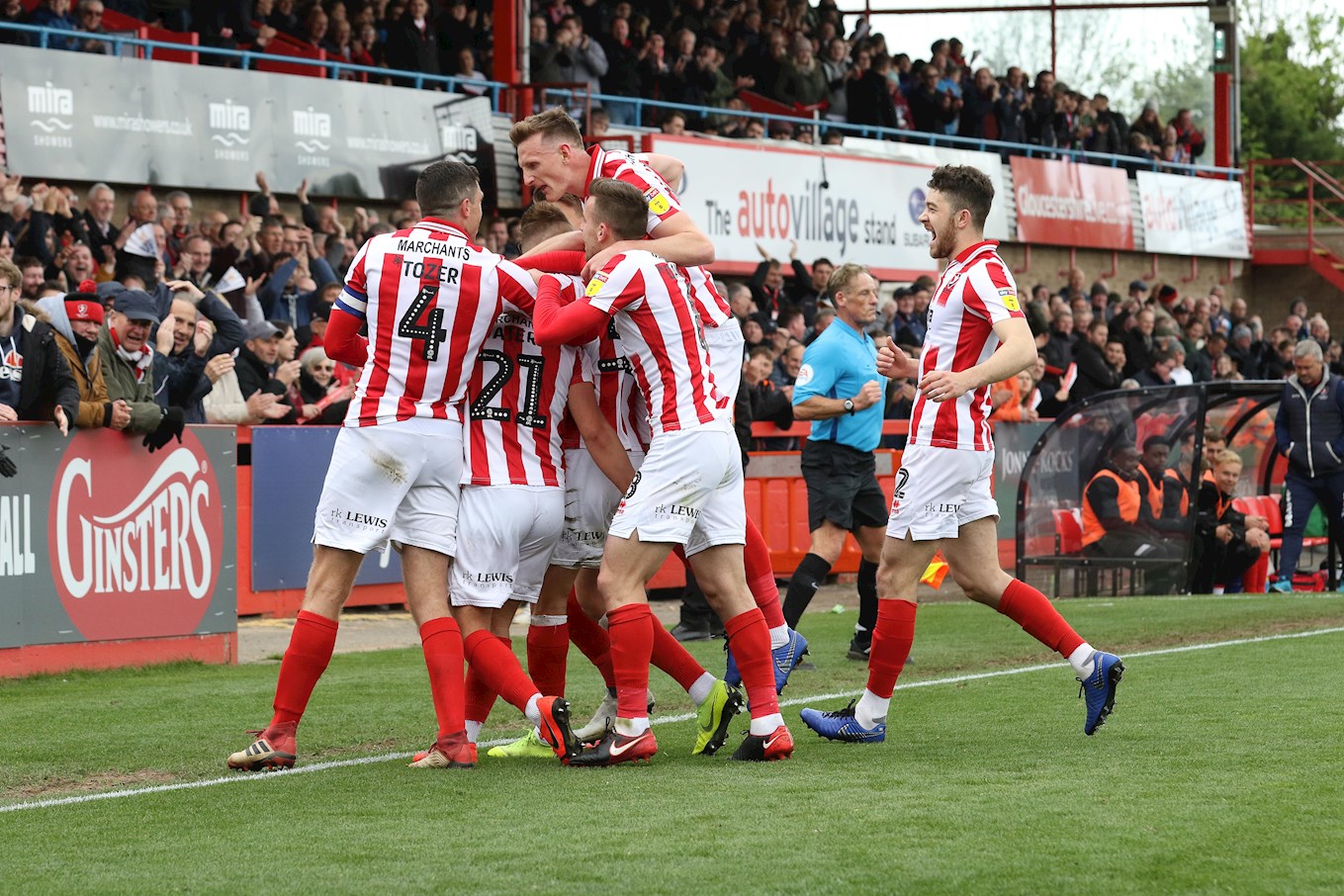 The first meeting between the two clubs in the 2018/19 season proved largely uneventful as both teams settled for a point three days before Christmas.

Matty Taylor's free kick saw Scott Flinders forced into a save but there was otherwise little to report with James Dunne also firing off target for the hosts. 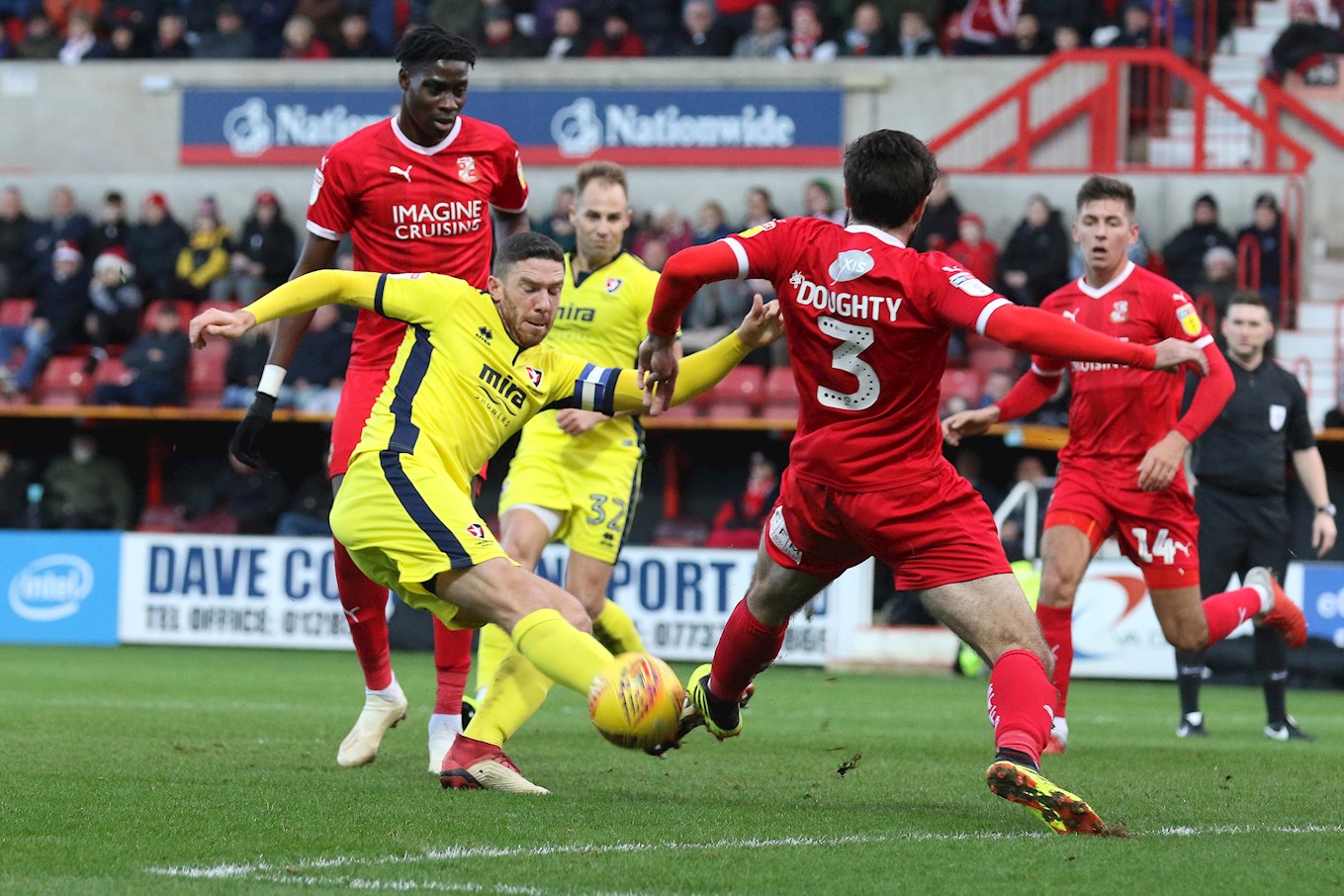 Cheltenham made it three straight wins over Swindon with a 3-0 away win.

Jake Andrews free kick set Gary Johnson's side on their way. Mo Eisa then doubled the score line shortly into the second half, while the forward capped the win when he added a third midway through the half. 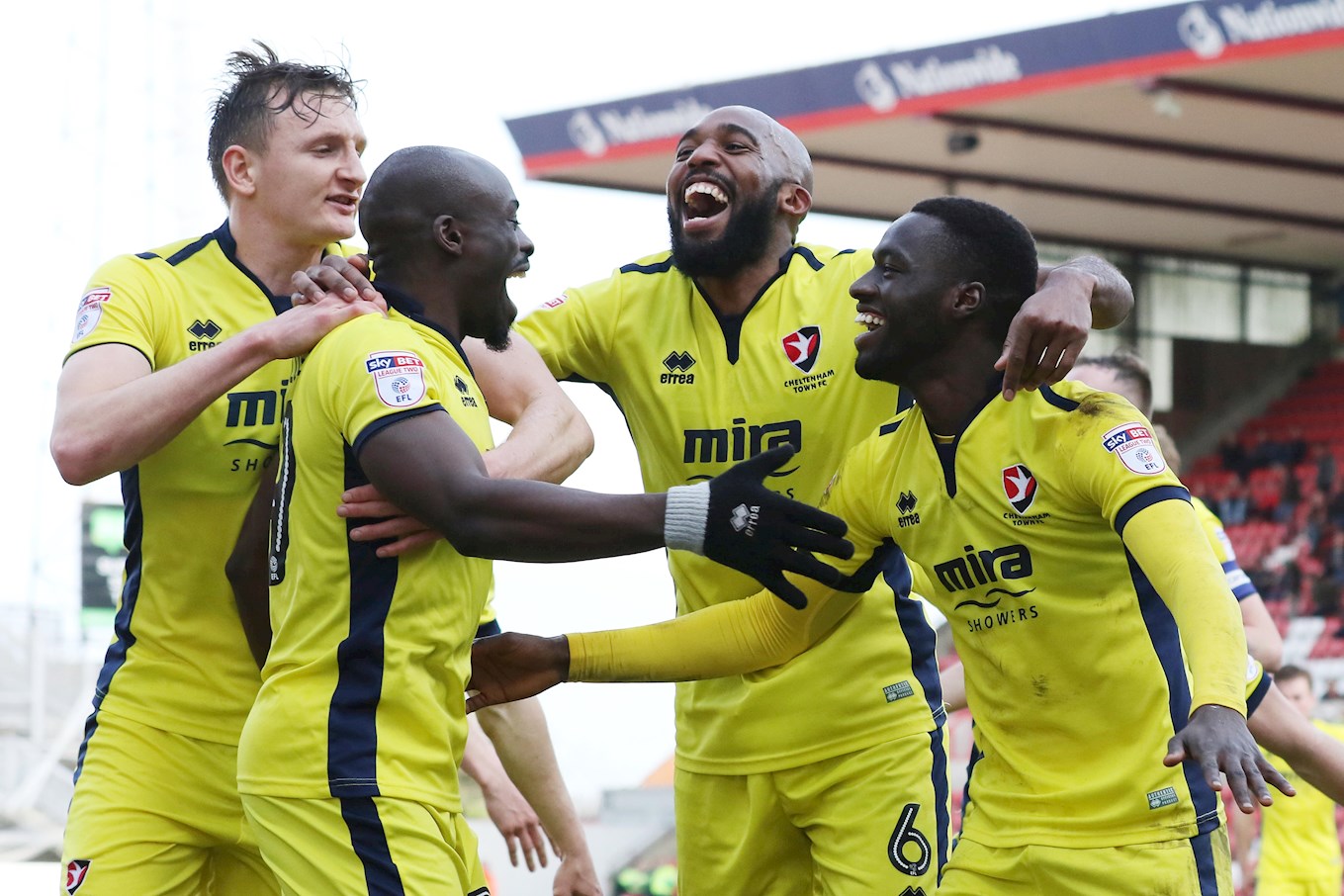 Danny Wright made up for his seeing a second half penalty saved by scoring a stoppage time winner in the first meeting between Cheltenham and Swindon for three years.

Scottish striker Brian Graham finished off Harry Pell's cross to give Gary Johnson's men the lead, however Swindon drew parity in the second half via Matt Preston.

Wright was then denied from the spot by Reice Charles-Cook's diving save, but he made up for his penalty error with the winner in stoppage time. 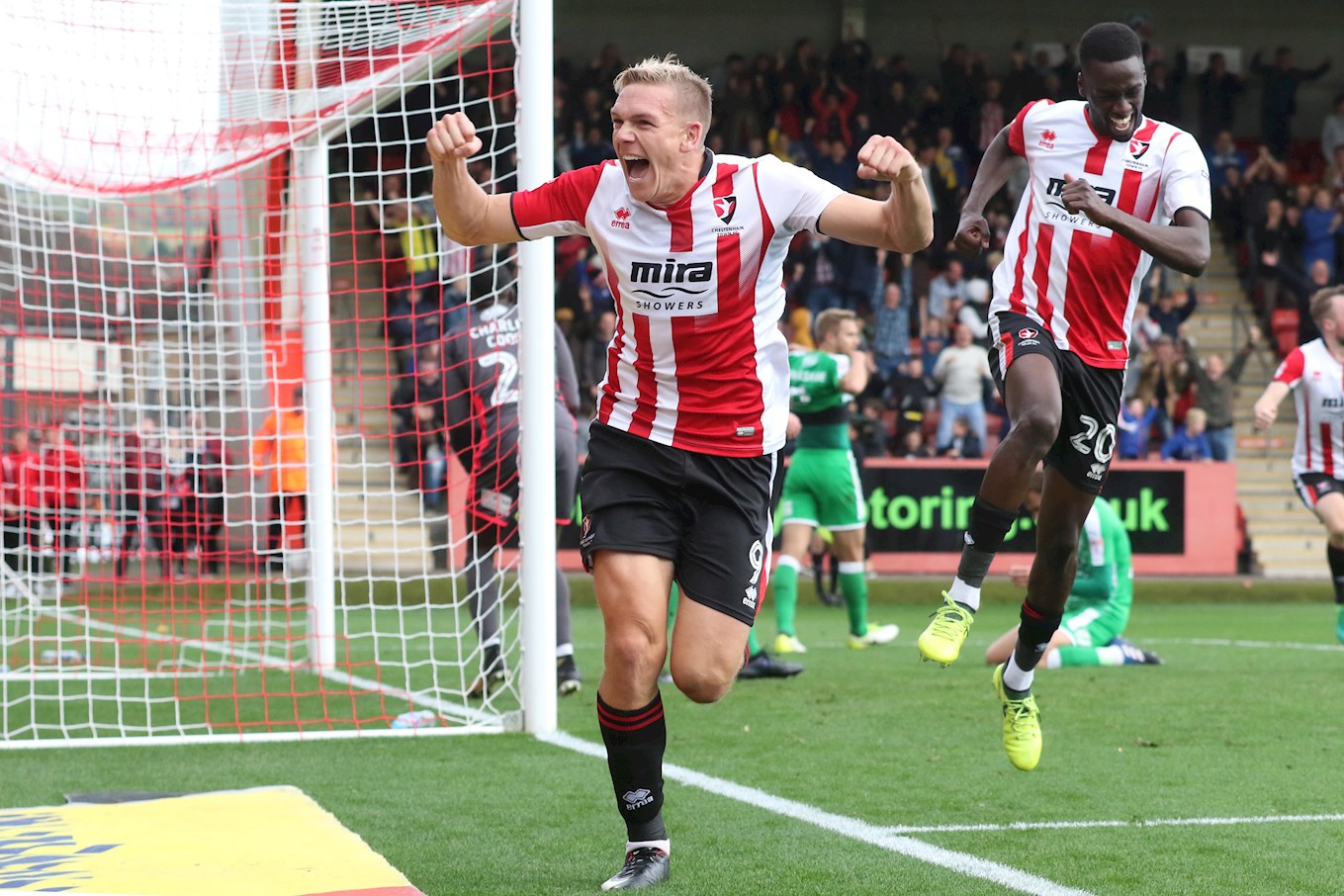 A League One Swindon side made the visit to the Abbey Stadium for a first ever FA Cup tie between the two clubs and were soundly beaten.

Swindon, under the management of Mark Cooper, fell behind when Byron Harrison scored his first of his three goals on the day. Terry Gornell made it 2-0 before half time.

After the break Harrison got his second, midfielder Matt Richards added a fourth and Harrison wrapped up the win with Cheltenham's fifth and his third in the last ten minutes. 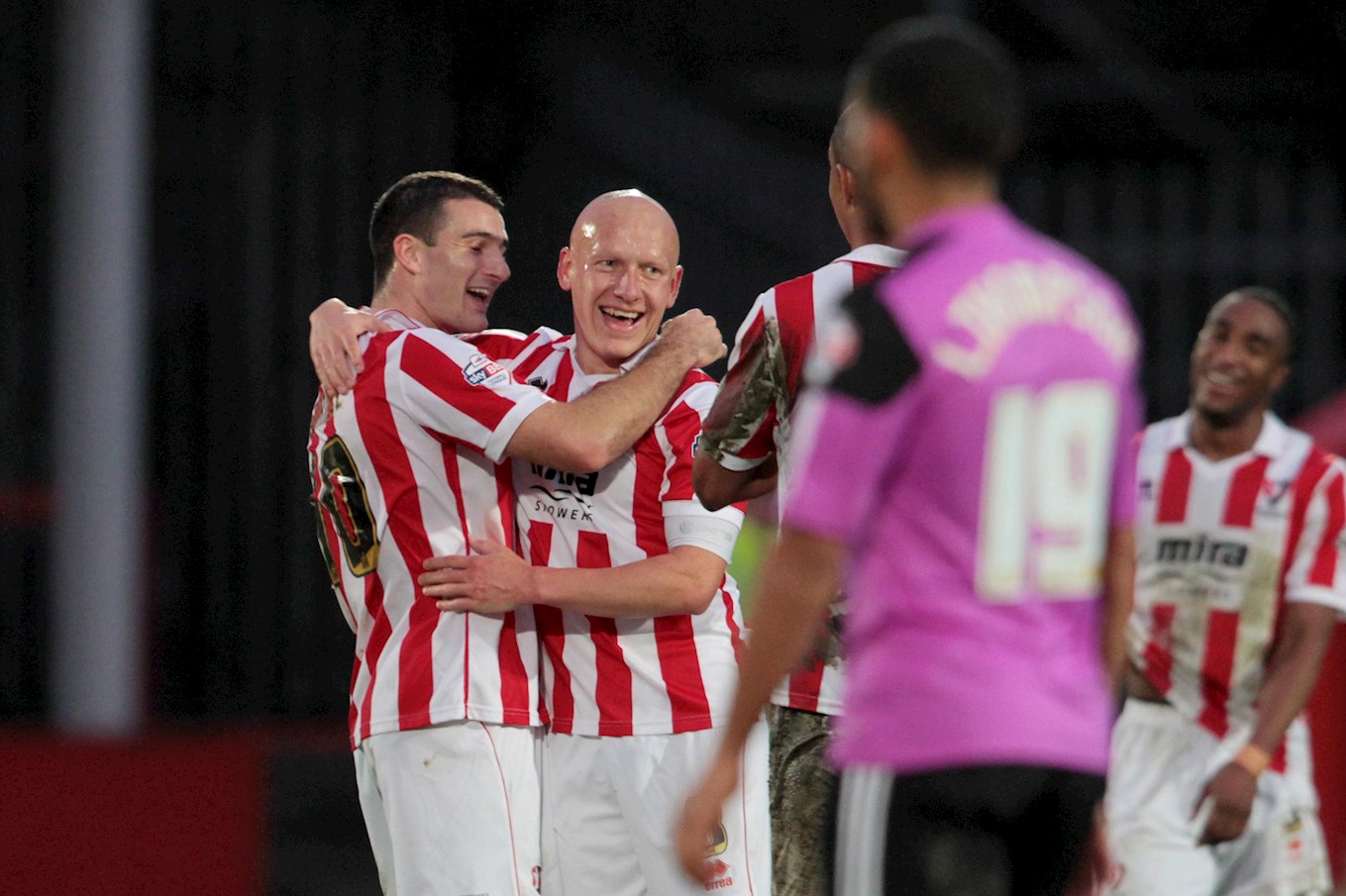 Future Cheltenham striker Paul Benson inflicted the club's only ever League Two loss to Swindon with his first half goal at the County Ground.

Swindon were flying at the top of the division under the management of Paolo Di Canio and could have gone behind had Daryl Duffy not seen his spot kick saved by Wes Foderingham.

Benson then stabbed home on 35 minutes for the matches only goal. The striker almost grabbed a second in the second half but on loan future England goalkeeper Jack Butland made a great save. 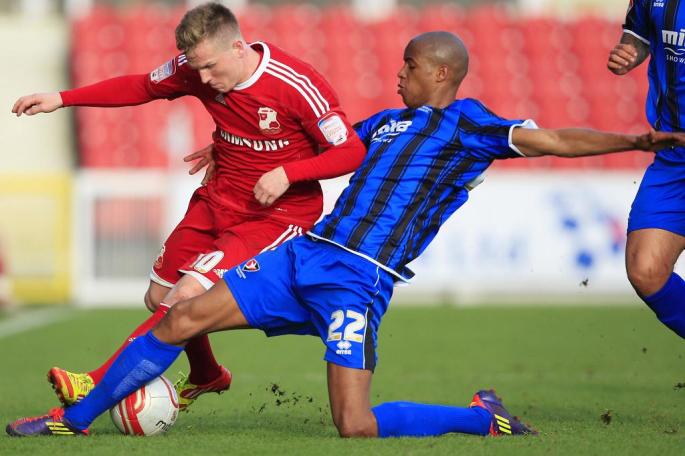 Alan McCormack hit the post early on for the visitors but Elliott (pictured) scored the games only goal shortly into the second half.

James Spencer was red carded for an elbow on Aden Flint in the final ten minutes but despite that Cheltenham held on.

Struggling at the bottom of the League One table, Cheltenham collected a point on the road at Swindon who themselves were looking to pull away from relegation trouble.

Future Wales international Hal Robson-Kanu gave them the lead just after the half hour mark, only to see Elvis Hammond (pictured) immediately level.

Hammond then doubled his tally to give Cheltenham the lead, however Swindon hit back when Kevin Amankwaah netted on 66 minutes, heading in from a Robson-Kanu corner. 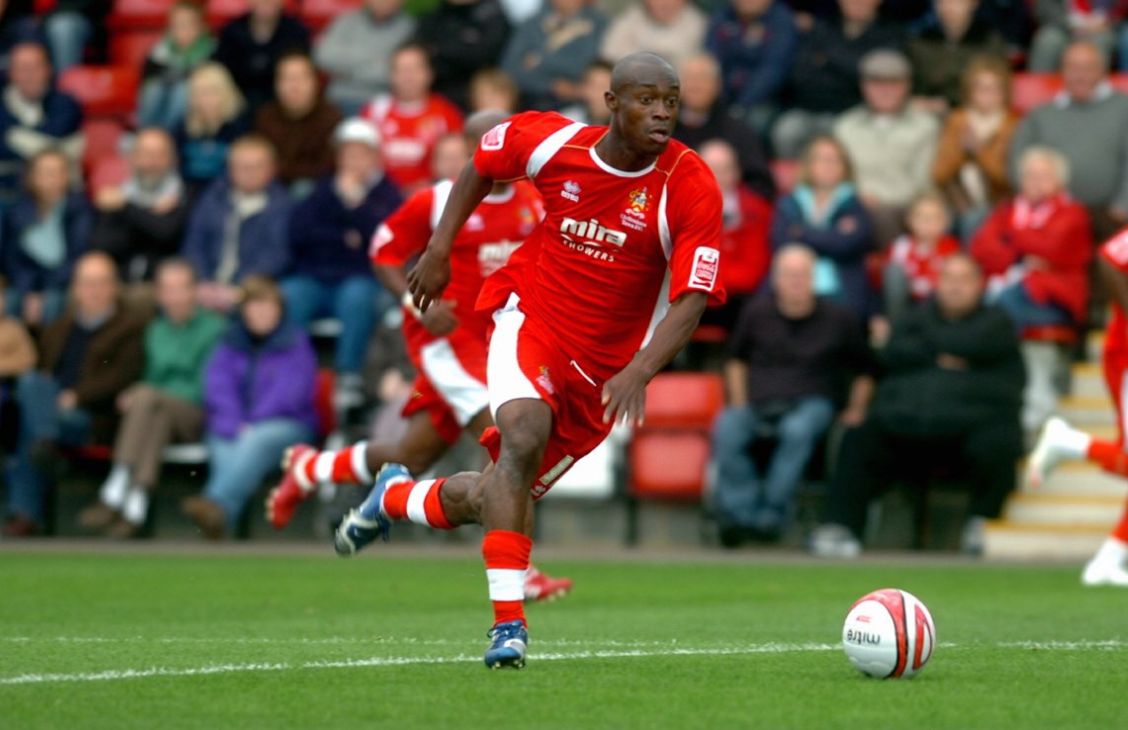 Ben Gill scored and was then red carded seven minutes later as Cheltenham earned an opening month of the season League One victory over Swindon.

The midfielder slid in a Barry Hayles assist to break the deadlock, while Jennison Myrie-Williams' header from an Alex Russell cross sealed victory.

Swindon earned their first ever win over Cheltenham with a comprehensive home performance as they scored three times without reply.

Their first was scored by Simon Cox, while Billy Paynter made it 2-0 when he got in on the end of a cross.

It was 3-0 when Christian Roberts, appearing as a substitute, found the bottom corner.

The two teams one and only Football League Trophy meeting saw Cheltenham claim victory, with the current Robins skipper scoring an own goal for Swindon having just broken through the ranks of the Wiltshire club.

Jennison Myrie-Williams broke the deadlock in the first half and the lead was double three minutes later when Craig Reid made it 2-0.

Blair Sturrock pulled a goal back for Swindon, but an own goal from Ben Tozer secured Cheltenham's win.

Blair Sturrock saw his first half goal for Swindon cancelled out by a fine Ashley Vincent strike.

Sturrock got on the end of a cross from Sofiane Zaaboub to give Swindon the lead in this League One tussle, however Vincent ensured the game ended level when he hammered in from 25 yards during the second half. 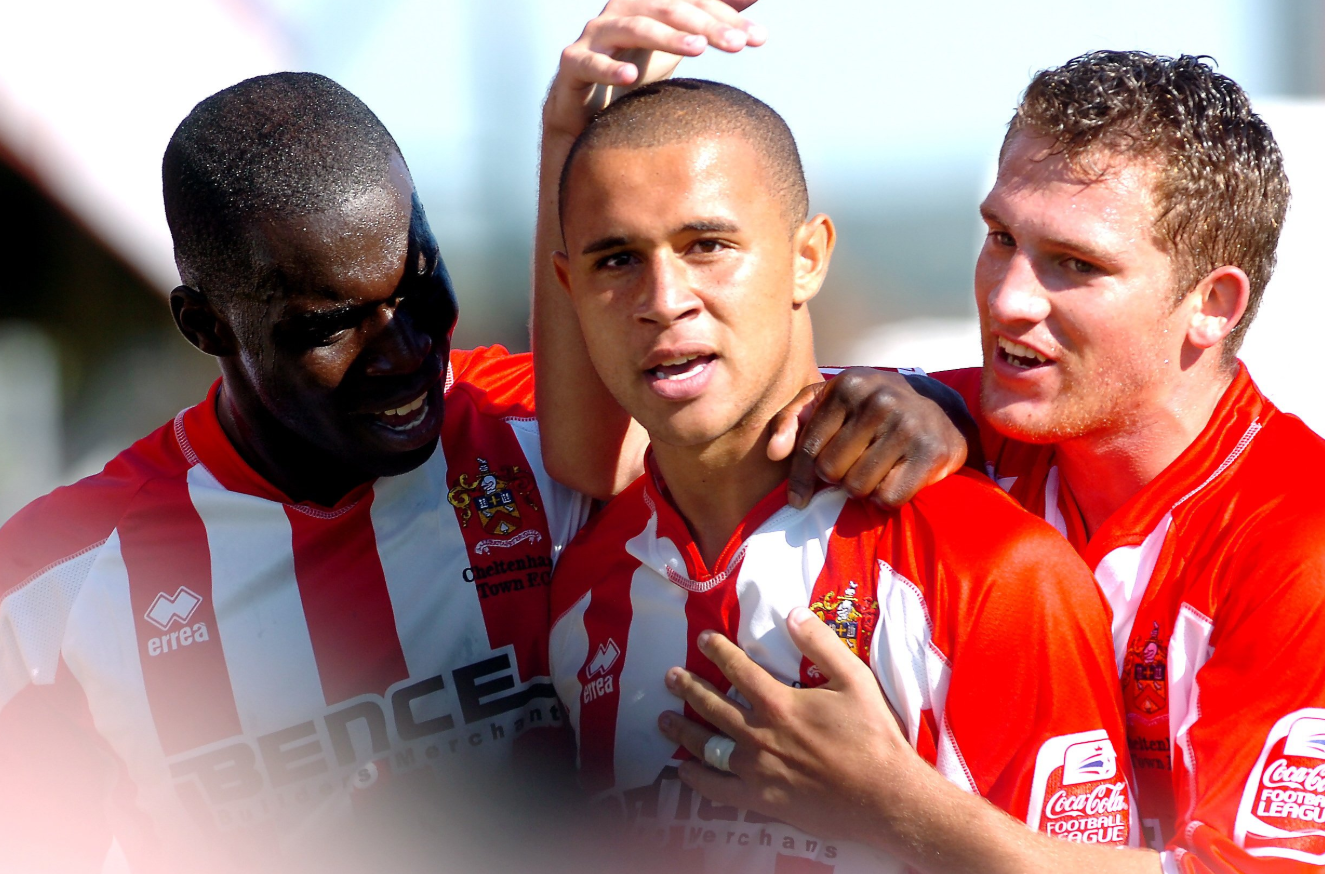 The Robins secured a morale boosting away win at the County Ground thanks to three different scorers.

Martin Devaney broke the offside trap to open the scoring and a few minutes before half time it was 2-0 when John Brough finished Mark Yates' touch in his direction.

Jon Beswetherick was then shown a red card for the hosts to reduce them to ten men, and Damian Spencer wrapped up the win with a late fizzer in stoppage time.

The first ever Football League meeting between Cheltenham and Swindon ended up being the home side's first league win of the 2002/03 campaign.

Graham Allner saw his team, struggling at the foot of the table, go in front when Hugh McAuley's curling free-kick was deflected off the head of Swindon's Matt Hewlitt and into the top corner.

It was 2-0 in the second half as Tony Naylor set up Russell Milton to finish from outside the box.