Everyone at Cheltenam Town was deeply saddened this morning to receive news that long-serving and popular former captain Alec Carson had passed away aged 77.

Alec was a member of the entertaining team of the late 1960s under Bob Etheridge that made a challenge for the Southern League championship in season 1967-68 and played Watford in the FA Cup first round the following year. The team was widely regarded as one of Cheltenham Town's all-time best until the transition to full-time professional status in the late 1990s and also contained such legendary players as Roger Thorndale, Gerald Horlick, Joe Gadston and Ronnie Radford.

Alexander ‘Alec’ Carson was born in Glasgow but brought up in Corby, a Northamptonshire town that attracted many people from Scotland to work in the steelworks there.

The young Alec showed promise at football and played for Corby Town's youth team before joining the ground staff at fourth division Northampton Town. He signed professional for the Cobblers in November 1959 and made his Football League debut in a 1-1 draw against Stockport County in April 1961. He made seven appearances the following season before moving to Aldershot in 1963, making five Division Four appearances over two years.

Alec became established as a versatile player who could operate at either full-back or half-back but it was at right half that he made the majority of his appearances for the Robins. 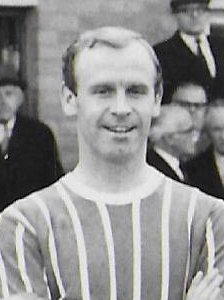 Signed by Harold Fletcher in the summer of 1965, Alec played in the half-back line for three quarters of the season but was moved up as a makeshift inside-left for the closing weeks as the team battled successfully against relegation. Following the arrival of Both Etheridge as manager in 1966 Alec was made captain and spent the next three years operating mostly in the right-half position as the team finished fourth in the Southern League Premier Division during season 1967-68 and reached the Southern League Cup final the following year. The team was not only successful but also played an entertaining brand of attacking football, featuring in a series of high-scoring games such as a 5-4 win at Cambridge City, 8-2 win over Yeovil Town and 4-4 draw with Romford.

A very hard working player and an asset to any side, Alec was a leader who possessed a tremendous will to win and it was no surprise that he was in demand from other clubs in the Southern League. He moved to Worcester City in 1969, scoring 15 goals from 87 appearances over two years and winning a Player of the Year award at St George's Lane.

After a brief spell at Hereford United he returned to Worcester then played for Evesham United, Cinderford Town and as player-coach to Gerald Horlick at Ledbury Town in the mid-1970s. In total he made 207 first team appearances for the Robins and scored 20 goals.

Our thoughts and prayers are with his family and friends at this sad time.