Cheltenham Town won in another thrilling Sky Bet League Two match at the Jonny Rocks-Stadium by beating Bradford by three goals to two.

Ben Tozer scored the winner in another exciting match at home for the Robins, who continued their fine start to the season and made it 15 home games without defeat.

Cheltenham started the better of the two sides and the man in form Ryan Broom almost scored inside seven minutes, but his powerful effort from the edge was well kept out by Richard O’Donnell.

Wing-back Chris Hussey got forward at every opportunity and almost scored from a tight angle midway through the first half, but he flashed a cross-shot just over the bar.

Moments later Hussey almost turned provider when his set piece found Tozer but he could only head wide on the stretch.

The Robins continued to dominate possession, albeit in their own half as the Bradford press worked in suffocating the home side.

Veteran Luke Varney had his first chance ten minute before half-time when Doyle-Hayes‘ cross found him a few yards out but he just miss-kicked it in front of the posts.

Moments later and the Robins fans had hearts in mouths when Clayton Donaldson beared down on goal, but the experienced forward fluffed his lines with the simplest of chances.

Bradford looked dangerous from corners in the first half and Flinders made a great save from Richards-Everton’s far post header.

Robins almost took an early first half lead, Sean Long found striker Reilly before the striker cushioned the ball onto Varney, whose half-volleyed snapshot flashed wide of the right-hand post.

Bradford scored with a swift counter attack on 50 minutes, James Vaughan put Donaldson through on goal before he found Anderson at the far post, who scrambled it in past Flinders and Doyle-Hayes.

But Reilly equalised for Cheltenham after Broom twisted and turned on the edge of the box and slid the Scottish striker through, before he powered it into the net with his left boot. 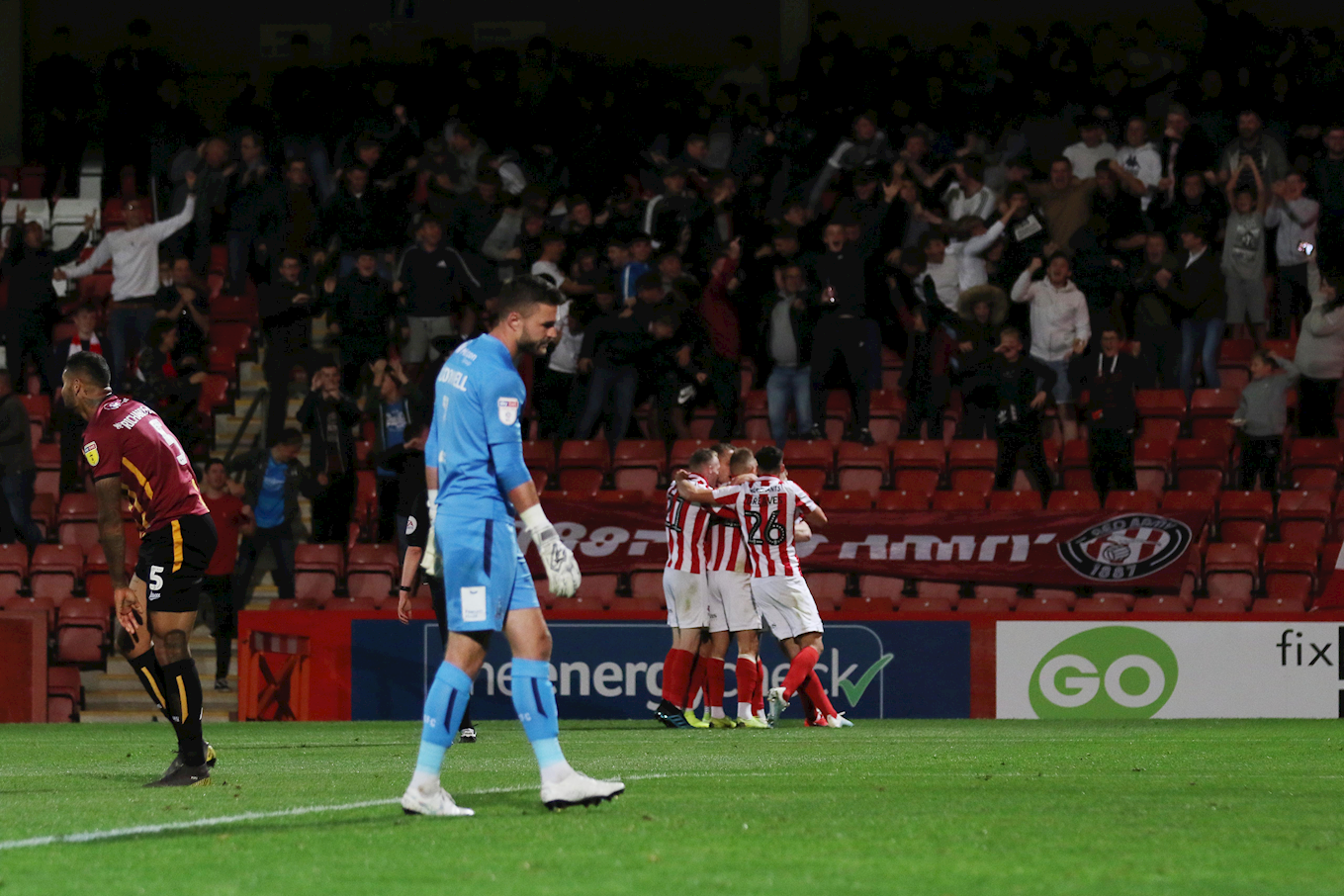 And 20 minutes from time, a long throw was cleared to the edge of the box and Doyle-Hayes slammed it home on the volley for his first career goal.

Bradford found an equaliser on 75 minutes when Richards-Everton, who had threatened all evening long from set pieces, rose highest to nod it past Flinders.

However, Robins captain and man of the match, Tozer, would score a set-piece header of his own just five minutes later as he flicked Hussey’s in-swinger on into the roof of the net.

As the atmosphere in the stadium intensified, Vaughan saw a close-range header saved by Flinders after some last ditch defending from the Robins defenders who were starting to show some nerves.