There's an eye on keeping up two fantastic unbeaten records at the Jonny-Rocks Stadium tonight when Macclesfield Town are the visitors (kick-off: 7.45pm).

Currently on a seven match unbeaten run in League Two, and eight matches overall, Michael Duff's Cheltenham Town side are also hoping to keep up the club's superb unbeaten home record, which stretches back to January.

Standing in their way this evening is a Macclesfield team going really well just outside the play-off places after 14 matches.

Get behind the team tonight as they look to keep up their good form. Tickets can be bought online and are available at the turnstiles.

Injury rules Tahvon Campbell, Josh Debayo and Max Sheaf out of the game. Reuben Reid is back in training but is not yet match fit to be considered for selection.

Goalkeeper Scott Flinders is getting set to line up against one of his former clubs. He represented the Silkmen at the 2017 FA Trophy final at Wembley.

Macclesfield became one of the first teams to change managers when within two weeks of the season starting former England defender Sol Campbell left Moss Rose and was replaced by Daryl McMahon.

They are 9th in the division heading into tonight's clash and have taken 20 points from nine games. It's a different season for the Macclesfield supporters to the one they experienced for the first time back in League Two last season after their National League title victory - they spent much of last season entrenched in the bottom two of the division.

The fluidity in attacking areas provided by the likes of Theo Archibald, Emmanuel Osadebe and Joe Ironside has seen them find the back of the net on 16 occasions in the league so far. 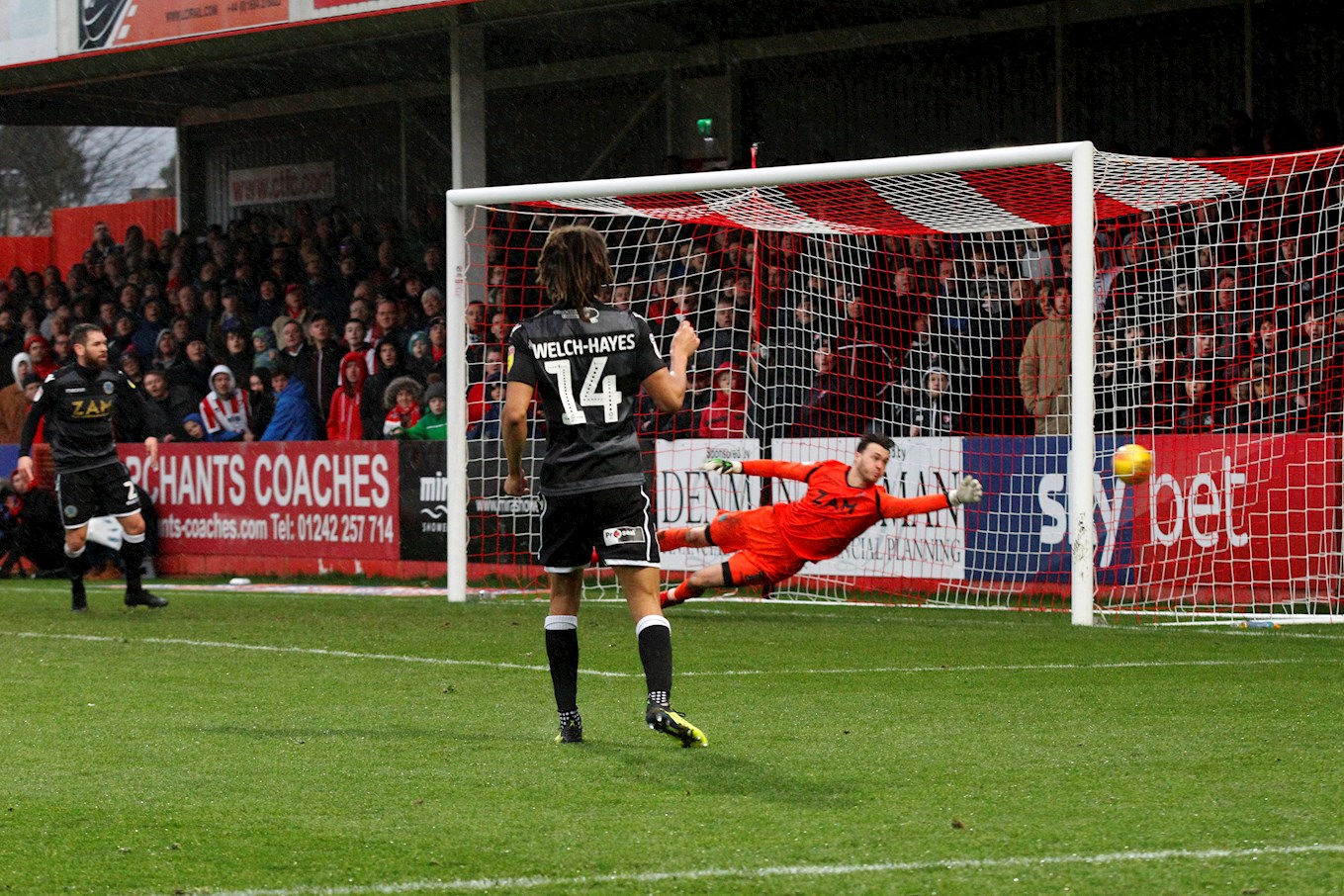 They've used the loan market well bringing in the likes of Connor Kirby from Sheffield Wednesday and Corey O'Keeffe from Birmingham City.

At the back Irishman Fiacre Kelleher, Theo Vassell who was last season at Port Vale and summer of 2018 addition from Bath City Miles Welch-Hayes are backed up by Newport born goalkeeper Owen Evans who is on loan from Wigan Athletic for the shot stoppers first taste of loan experience in the Football League.

Jay Harris, who helped Tranmere Rovers earn promotion through the play-offs last season, is a reliable and experienced head in the middle of the park in a team otherwise made up of several young talents with exciting League potential.

A dramatic second half comeback against this evening's opponents kick-started the unbeaten home run that stretches still to this day last January.

Macclesfield, struggling near the foot of the table and under the management of Sol Campbell, visited the Jonny-Rocks and saw themselves 2-0 up inside the opening 25 minutes thanks to goals from Michael Rose, who netted from the penalty spot, and Scott Wilson.

They also had key central defender Nathan Cameron sent off in between their two goals and looked to have set themselves up for what would have been a hugely morale boosting away win.

Cheltenham had other ideas though and fought back brilliantly to secure all three points.

Firstly Luke Varney halved the deficit when he acrobatically volleyed in. Then it was all square when Chelsea loanee Jacob Maddox smashed home.

Finally three points were secured on 79 minutes when new signing Charlie Raglan forced the ball home from a set piece.

Revisit the action from that contest last season:

Tickets can be bought online in advance before tonight's game or are on sale from the turnstiles.

The ticket office will be open selling tickets for the upcoming away match at Grimsby Town, plus the next home game against Forest Green Rovers on Saturday 2 November.

Supporters are reminded that as part of a trial run ahead of the Forest Green game that the club will also be opening the turnstiles at the Whaddon Road end of the Colin Farmer Stand for tonight's clash.

The club shop is open before kick-off selling merchandise and match programmes.

The match programme is on sale around the stadium tonight, including in the club shop, at a price of £3.

Attacker Alex Addai is the big interview in the programme, where there are also features on Sean Long, George Lloyd, Dan Bowry plus from chairman Andy Wilcox and manager Michael Duff.

Take a look at all that is in the match programme this evening in the 72-page copy. 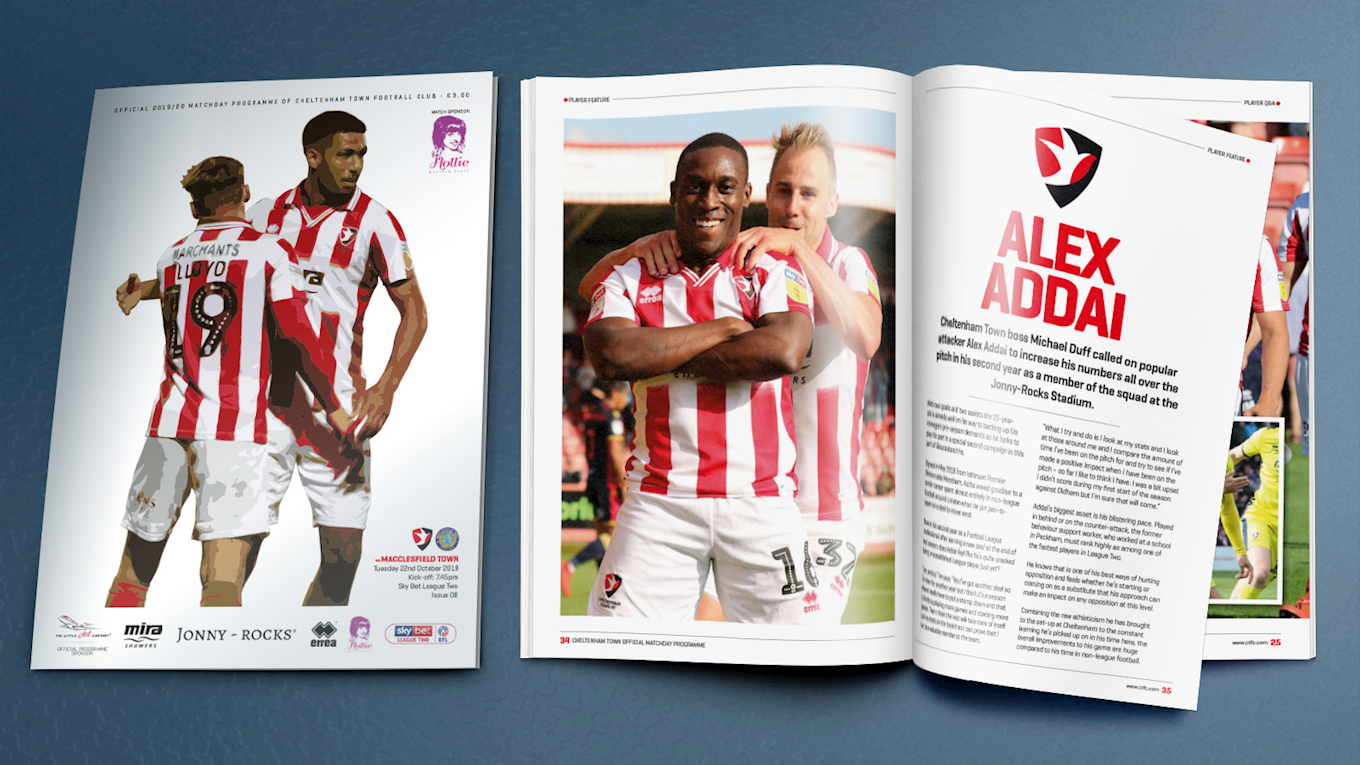 Keep up to date with how events unfold on Twitter by following @CTFCofficial. You can catch team news, images and minute-by-minute updates and the club's Facebook page will also have team news and goal updates too.

Watch the game live tonight on iFollow. A match pass is available and priced at £10.

After the match visit the club website to read a match report and to hear reaction from the manager and one of the players.