Cheltenham Town under-18s will play Arsenal in the FA Youth Cup third round after an incredible night of football at the Jonny-Rocks Stadium.

Less than 24 hours after the first team and Newport County shared an 11 goal game in the Leasing.com Trophy, the goals returned to the Jonny-Rocks, with the tie falling in Cheltenham's favour.

Charlie Stanton also scored twice, while Toby Lawrence and Aaron Evans-Harriott found the target to successfully confirm Cheltenham's place in the third round.

Compared to the rest of the night a rather uneventful opening sprung into life on 17 minutes when Harrison Brook saw his shot blocked well by Isaac Lawrence, while similarly impressive defending from Pompey centre back Liam Kelly prevented Ebanks from rolling into an empty net after a slip up at the back as he deflected his shot onto the bar.

The night's first goal belonged to Brooks as he was left in space on the left and took full advantage by slotting past the on rushing Freddie Lapworth.

Two minutes later though and Cheltenham were level. Ebanks struck with the first of his well-taken finishes to draw parity.

The Robins goalkeeper made two good saves again, denying Stanley after he had got in down the right, and then forcing Charlie Bell's strike away from goal.

Five minutes before half time Pompey added to their lead though when Harry Anderson swept in from close range. 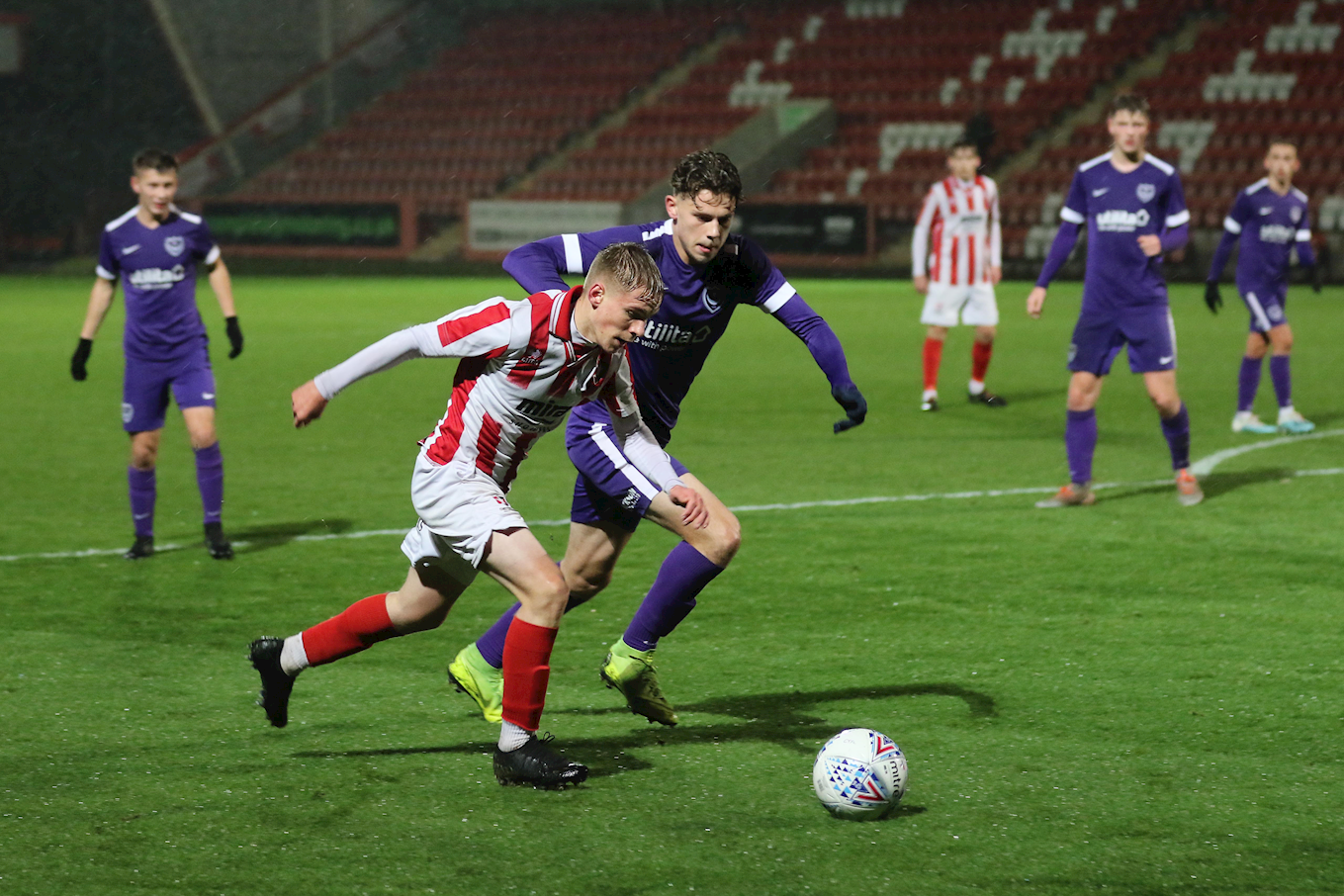 The Cheltenham response was immediate. Ebanks got his second as he produced a confident strike when the ball dropped to him in the area, and then the Robins were level again as Stanton drove in with an easy finish after Ebanks had won the ball high up and played him in.

Stanton should have had a second were it not for the post at the start of stoppage time as he nearly headed in Aaron Basford's cross, while Leon Pitman's strong hand ensured Stanton's stabbed shot moments later was kept out.

The visitors couldn't prevent Lawrence from heading in his second FA Youth Cup goal in as many games as he rose highest on the stroke of half time to remarkably put Cheltenham ahead.

And that lead was increased after the break when Ebanks got his hat-trick. Stanton's knock down was cushioned down by the big striker, who let fly with another good finish. 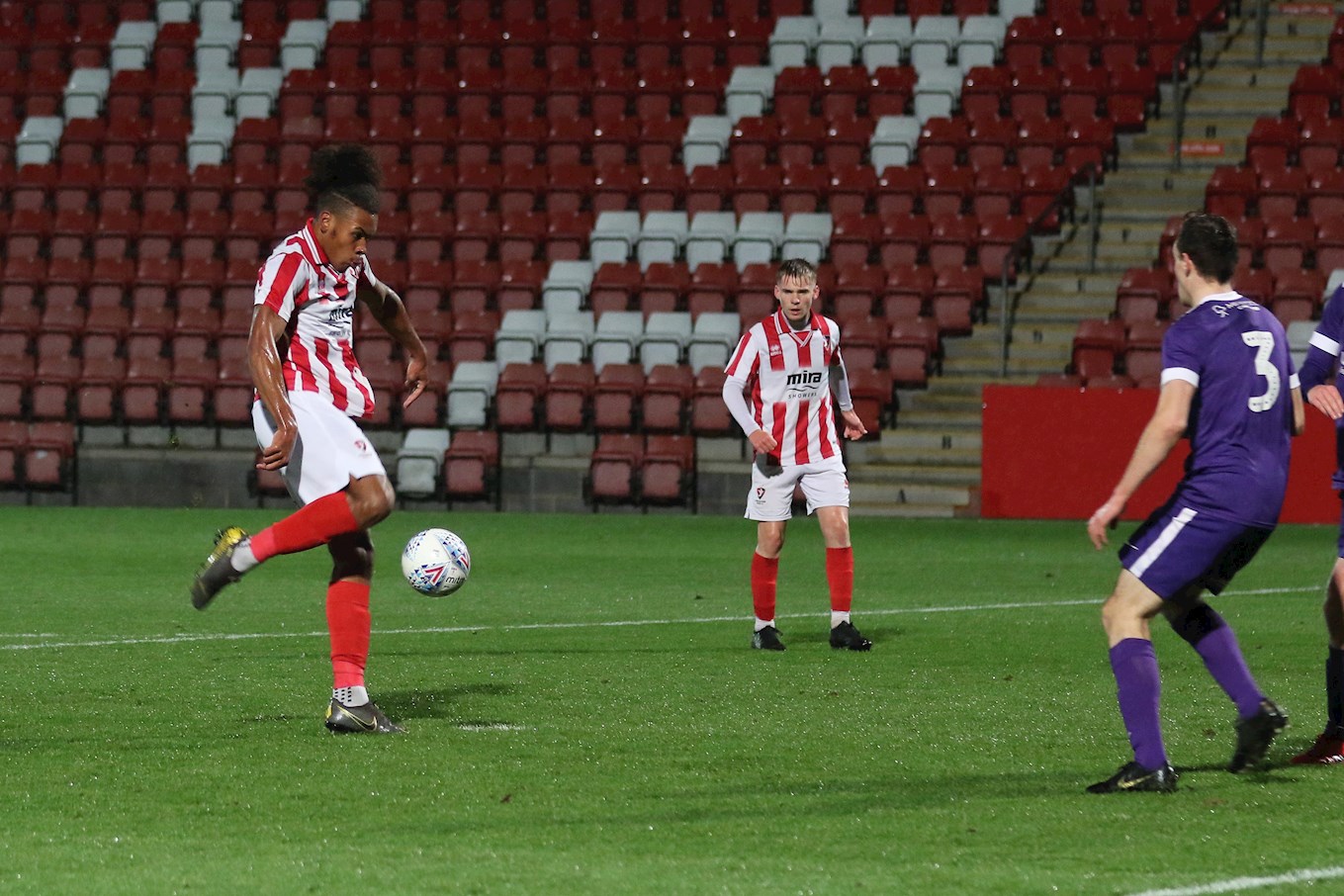 Ebanks could have had a fourth were it not for important defending on the line, while Basford's shot on the hour mark was kept out by Pitman who pushed his strike away.

The sixth goal came on 62 minutes. Stanton grabbed his second as he was left free in the box to nod home from a corner.

It was going to take a lot for the visitors to find their way back into the contest, though they did see Bridgman hit the post, while the Robins equally were testing the woodwork as Tom Chamberlain produced a stunning volley that slammed against the bar.

Evans-Harriott had yet to get his name on the scoresheet, but the talented wide man did so in the final ten minutes when he notched Cheltenham's seventh. He tucked in from the right and produced an excellent bottom corner finish.

The final Robins goal of the night came as the game entered stoppage time. Ebanks bagged his fourth with the most comfortable finish of the lot.

There was still time for more. Lapworth made a fantastic double save from a free kick and then Stanley follow up, but saw Bell's low shot slam in to ensure Pompey scored four, but it was just the final milestone in a dramatic game that will see the Robins take on the Gunners next in round three.