Swindon Town and Cheltenham Town go at it again tonight in the FA Cup for a first round replay at the Wiltshire side's County Ground home (kick-off: 7.45pm).

It's a third meeting of the season between the two clubs after Alex Addai's last gasp equaliser in the first tie ten days ago earned Cheltenham another opportunity to try and claim a place in the second round of this season's competition.

Port Vale are the team that await whoever wins this evening's game. With the prospect of being able to play at home in the second round, and being just one game away from the excitement of drawing a big club in the third round, both teams will be going all out once again this evening to see who can come out on top having seen both clashes so far this season end in draws.

Gavin Reilly is a fitness doubt after picking up a foot injury in Saturday's draw.

Tahvon Campbell misses out. The forward is a few weeks away from a return and it's the same story for Josh Debayo who is making progress after recent surgery.

Will Boyle has recovered from a bout of illness and was back in training on Monday and is expected to be available.

Victory at Salford City on Saturday lifted Swindon to the top of the League Two table. They'll be hoping to carry their impressive league form into their cup showing on Tuesday.

Their FA Cup performances in recent seasons have been patchy - going out at the first round stage in five of the last seven seasons - with a 2011/12 run in the competition seeing them reach the fourth round where they were knocked out by Leicester City.

Tipped to be right up there in the fourth tier this season - the one time Premier League outfit have proven that to be the case so far and carry a large and talented squad that they've added to again since the two teams met at the Jonny-Rocks Stadium earlier in the month. 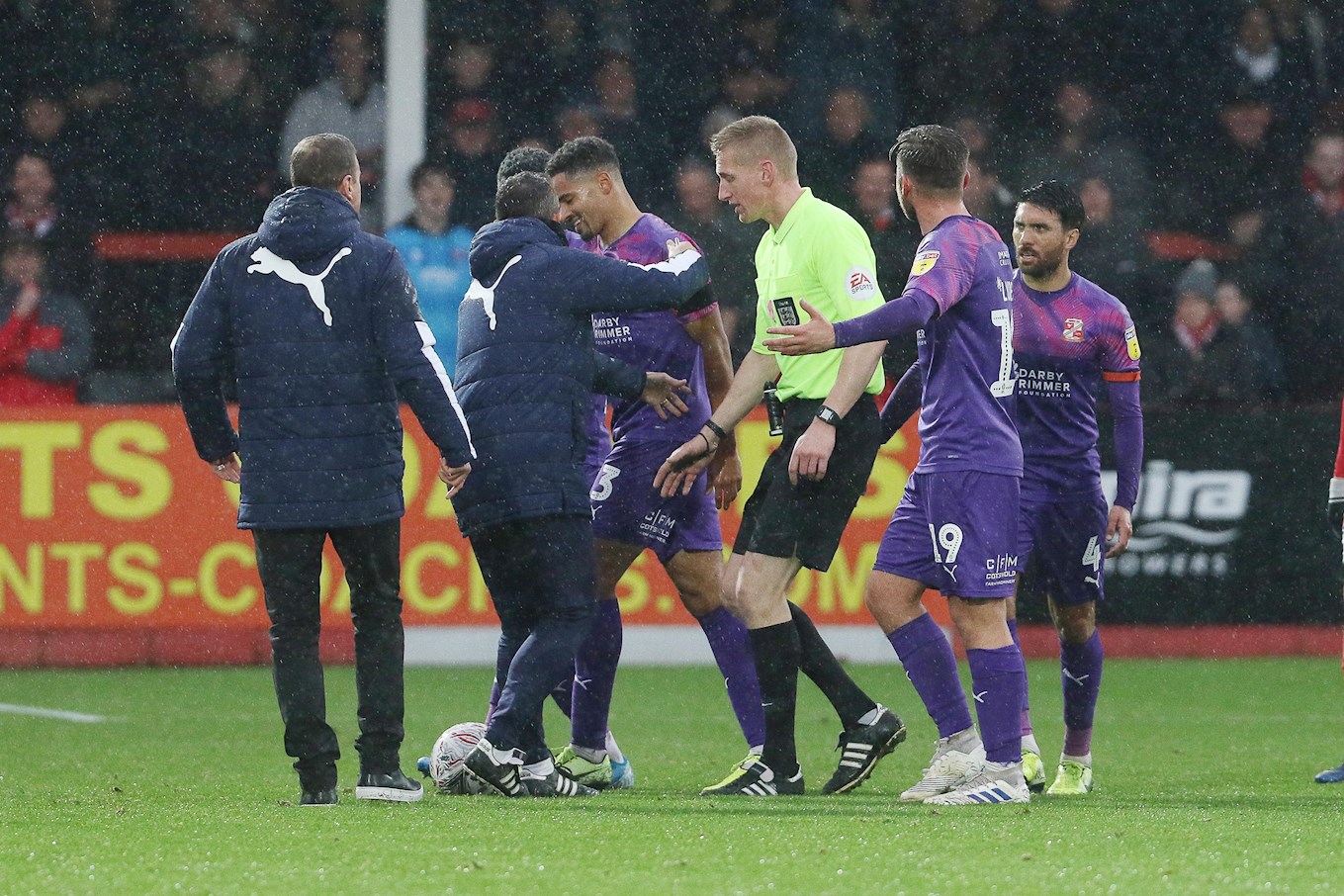 Scotland international Paul Caddis has returned to add competition for places in a team that has also been boosted by a number of shrewd additions in the loan market. One of whom though, forward Eoin Doyle, missed the first game in the first round and is unlikely to feature again as part of his loan agreement from Bradford City.

Despite that they still pose a significant threat up top with the trickery of Norwich City loanee Diallang Jaiyesimi, threat of Jerry Yates and speed of Kaiyne Woolery.

Key men in the middle of the park for them include Michael Doughty and Danny Rose. The former was sent off in the first League Two meeting between the Robins and Swindon back in August.

Manager Richie Wellens is in his first full season in charge at the County Ground. The ex-Oldham Athletic manager when it comes to League Two matters has won five, drawn one and lost three when in action at home.

Two stoppage time goals from both sides forced this first round tie into a replay this evening.

Swindon, who dominated much of second half proceedings at the Jonny-Rocks Stadium, thought they had clinched a place in the second round when Jerry Yates popped up with a goal on 91 minutes. 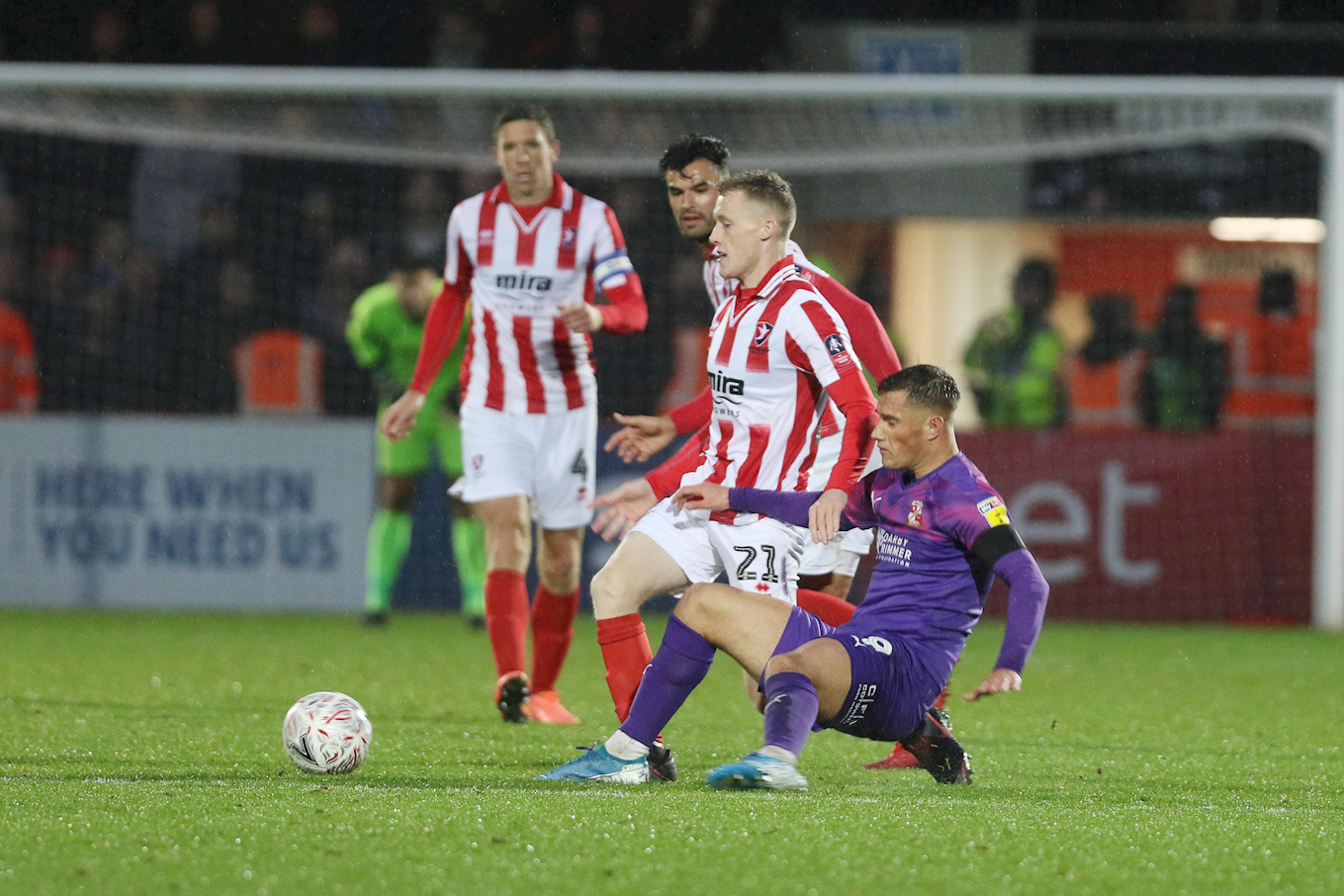 Alex Addai had other ideas for Cheltenham however and the substitute levelled with a well-taken finish seconds after the restart to ensure the match finished all square at 1-1.

That match ten days ago means that Swindon still haven't won on the road at Cheltenham. Watch the highlights from the game:

There are tickets and away travel on sale from the ticket office today at the Jonny-Rocks Stadium.

If you don't buy from the ticket office in advance then tickets can also be purchased at tonight's match before kick-off.

Supporters who have booked on the Travel Club coaches making the trip are advised that they leave from the Jonny-Rocks Stadium at 5pm.

You can stay updated online by following @CTFCofficial on Twitter. Follow updates throughout the evening and also keep an eye on the club's Facebook page for score alerts.

Listen to commentary online by tuning in with an audio match pass on iFollow.

After the game visit the club website to read a match report and to hear from manager Michael Duff and a member of his playing squad reacting to the result.