The Robins are celebrating 20 years since the club were first promoted to the Football League in 1999 this year, and throughout the season club secretary Paul Godfrey has been detailing some of the key matches that saw Steve Cotterill's side clinch the Football Conference championship in the club's matchday programme. This week Paul looks back on a long trip to Barrow, and another round of clashes against Hereford United and Stevenage Borough.

There are some aspects of Cheltenham Town's two National League championship seasons that bear a remarkable similarity. On both occasions it was hard work, team spirit, inspired management and clever recruitment that overcame the odds against rivals with much bigger financial resources. On both occasions the team went on a storming run of form in the middle of the season and on both occasions the month of March produced a run of games when it very nearly all went wrong.

At the start of March 1999 the Robins faced a difficult long distance trip to Barrow. Back then director 'Gentleman' Brian Sandland booked all the away travel (now we use a dedicated sports travel agency) and he found us a hotel in Grange-Over-Sands. Heading down for the team dinner on the Friday night, the players found themselves in a gigantic dining room full of pensioners on coach holidays with a long table reserved specially for them right in the middle. The directors amused themselves with a trip to a local pub that became particularly lively when the local amateur dramatic society arrived after rehearsing their latest play. It’s often the case that a happy club is also a successful club and there is no doubt that a lot of fun was had that season!

The game itself was rescued in the second half after Cheltenham had been out-fought in the first period and found themselves behind to a Brian Dawson goal on 33 minutes. Worse was to follow when Mark Freeman was sent off for a second yellow card but half-time substitute Keith Knight drove in a 73rd minute shot from the edge of the box to level the scores.

In those days it was still customary for non-league teams to socialise in each-other's clubhouse after the game. On leaving the bar at Barrow, however, Steve Cotterill said to his players: "make this your last beer of the season." To their credit, the lads dutifully obliged with Mark Yates setting an example (of sorts) by putting his half-empty bottle down on the pavement and leaving it there.

Three days later Hereford United headed to Whaddon Road for a reprise of the bad-tempered encounter of a few weeks before.

Cheltenham returned to form with a strong performance that was missing only the finishing touch. Yates and Michael Duff both hit the post and both Neil Grayson and Jason Eaton went close before Jamie Victory opened the scoring on 39 minutes with a firm shot from the edge of the box. That lead was to last only 45 seconds as Christian Roberts levelled from the Bulls right from the kick-off.

Back came the Robins and John Brough restored the lead on 61 minutes.

Hereford would not be unbowed and, cheered on by their usual raucous band of travelling fans, forced two good saves from Steve Book. Then, just as we thought three vital points had been dug out, winger Paul Parry struck from close range to make it 2-2 with only 30 seconds left.

The following Saturday it was back to Stevenage Borough for another grudge match following the FA Trophy antics of the previous month. It proved to be a good game that was incident-packed right from the start - Michael Love of Stevenage was booked only 18 seconds into the game and John Brough gave Cheltenham the lead after three minutes. 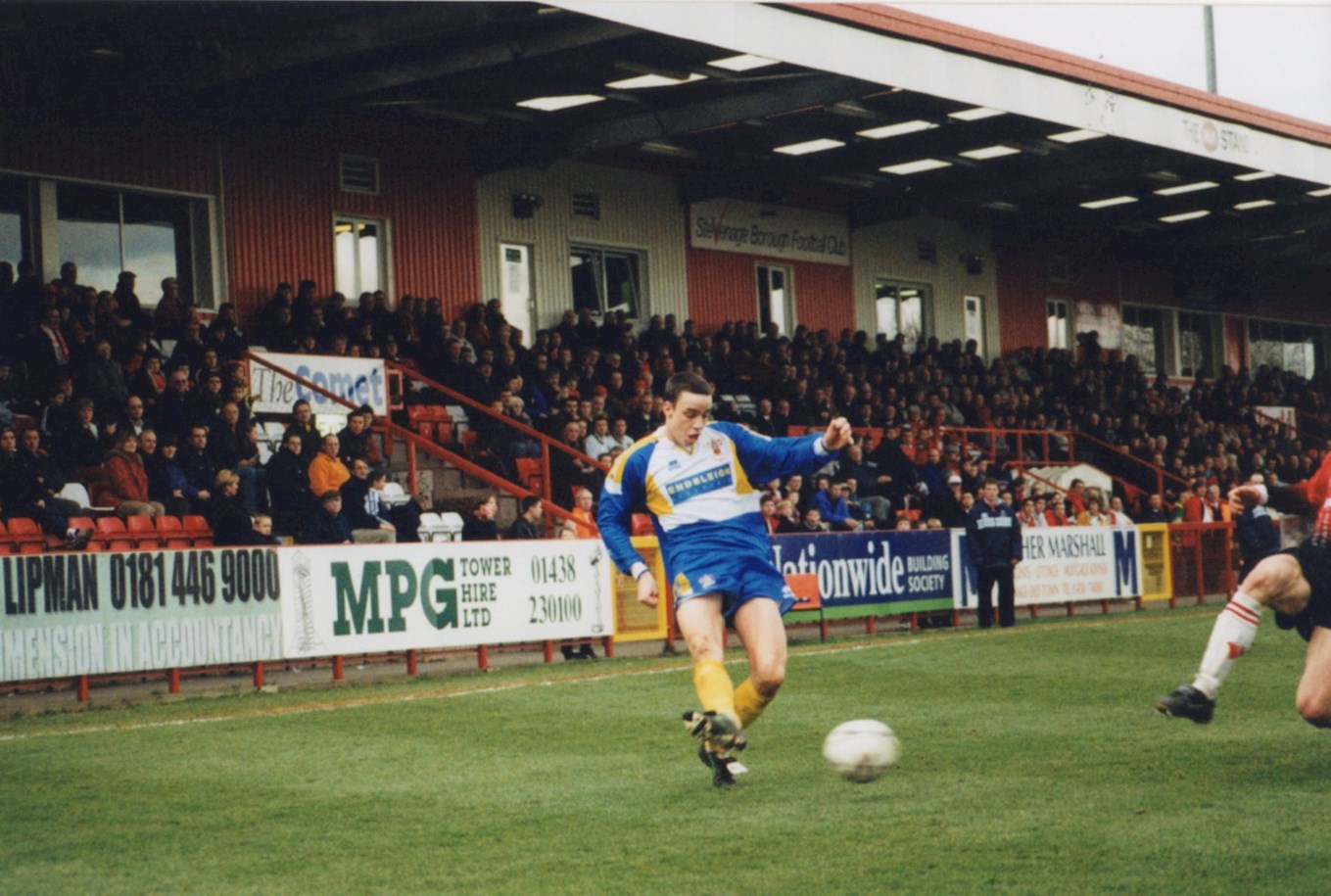 Stevenage were a good side when they wanted to be and burly striker Carl Alford put them level at the end of a well-crafted move 16 minutes later. The home side then took the lead just shy of the hour mark but Lee Howells made it 2-2 from a defence-splitting Bob Bloomer pass 16 minutes from time. Both sides had chances after that and with Bloomer sent off for a second booking late in the game, the Robins were glad to hold on.

So, three successive league draws for the Robins but only one defeat in the previous 15 games leaving the team still second in the table, three points behind leaders Kettering Town but with four games in hand.