With 31 appearances in a Cheltenham shirt this season, midfielder Chris Clements has been a mainstay in a Robins side pushing for their highest Football League finish for six years.

The former Crewe Alexandra, Hednesford Town, Mansfield and Grimsby midfielder has been at the Jonny-Rocks Stadium since the end of August, when he signed a short-term contract.

His impressive form earned him another deal in January and with just over a month-and-a-half of the campaign to go the 29-year-old will be eyeing a strong finish to the campaign.

He sat down to discuss Friday’s defeat at Newport County, transferring home form to games away from home, progress at his former club Mansfield Town and the challenge of taking on Northampton Town this Saturday.

You’ve had a bit more time to mull over the Newport game across the weekend. Looking back are there similar emotions now to Friday night or have things changed?

I think it’s the same. We went into the game confident and our away form hasn’t been what we wanted it to be – we need to rectify that as soon as possible. I think the way we performed on the night we deserved at least a draw, I don’t think we deserved to lose the game, I don’t think there was much in it. We limited them to a few chances and it was a difficult one to take. The conditions, the pitch, you’ve got to play to – I thought we played to that well and I thought we deserved at least a draw.

The pitch is a big thing at Newport and the weather was also bad. Knowing how well they play that surface does it almost mean you’ve got two major things to think about – Newport as an opponent and the surface?

Everybody going there unless it is early on in the season you know what the pitch is going to be like. They play rugby on it as well which isn’t ideal for teams going there but they play on it every home game so I think their style of play suits their pitch. When they play away they may play slightly different, but they’re obviously used to playing that style of football and when teams go there we like to pass the ball, but we had to change it up a bit on Friday night to combat the conditions of the pitch and the weather. We did it well to be fair. Newport is a difficult place to go – coming back with a draw would have been good for us but I think we might have deserved a win a little bit as well.

The away form is completely opposite to the home form right now, how do you go about trying to improve the away form?

It’s just performances – we have to believe in ourselves and have confidence when we’re away. At home everybody seems to have the freedom of the park and we play some good stuff. We just need to take that away now and pick up some points. 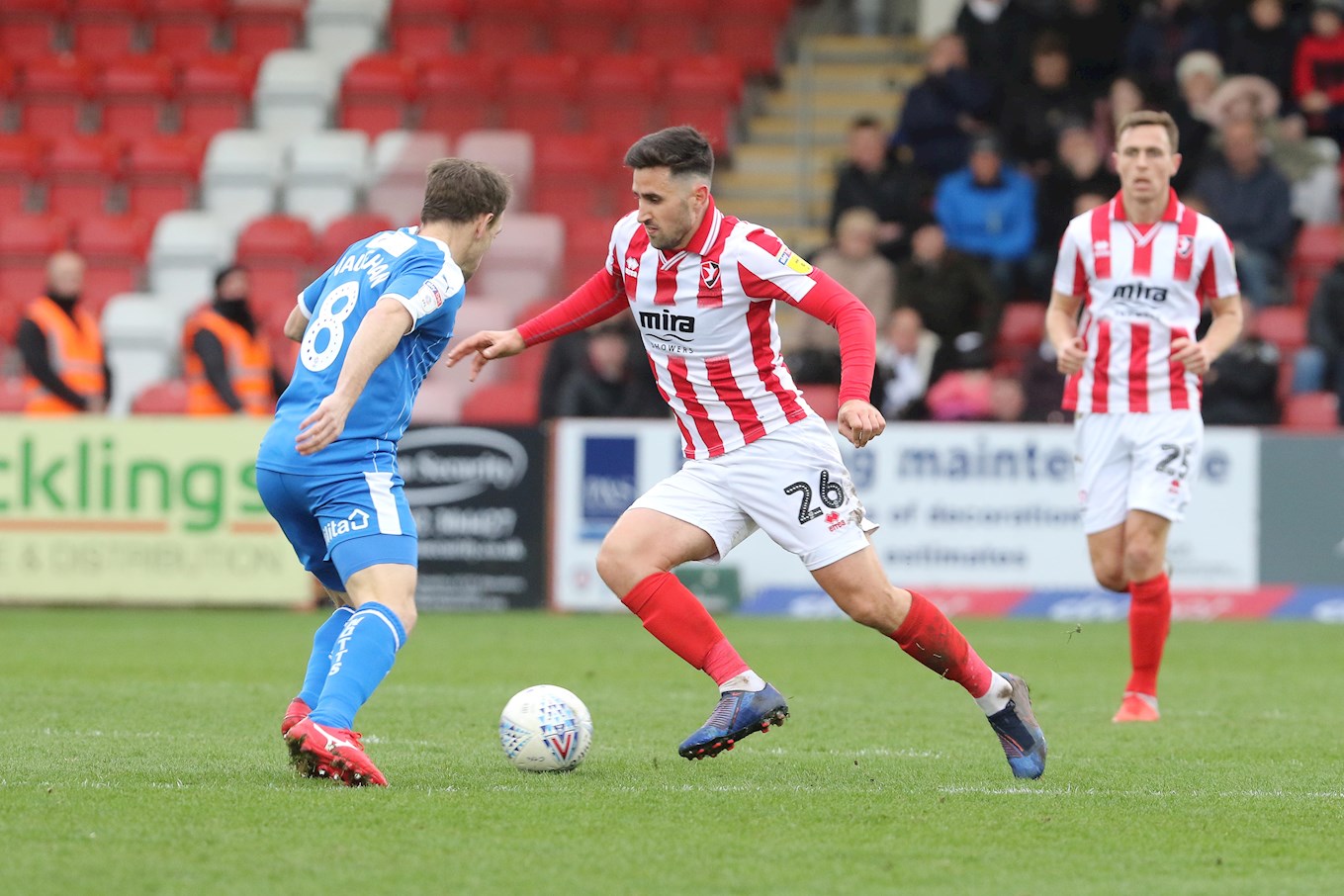 We have got a good identity when we play at home, is it harder to play on our terms when you go away from home? Do you have to accept that the home side will play on their terms and you’ve got to adjust as the away side to that?

I think our pitch plays a lot into that. I think the groundsman has kept the pitch in great nick here. You go away and the pitches are not maybe as good as ours. You obviously get different size pitches which is going to be different in the way we play. At home we seem to have a freedom that we need to take away. Our away performances haven’t been too bad, obviously the results have not come with it, but we need to keep the performances even if we have to nick a result 1-0 then we need to do that.

Your old club Mansfield are going for automatic promotion and have a big game against Lincoln tonight. You were an unused substitute when we were there a few weeks ago, how much did Mansfield play a part in your career?

It was massive. They got me back into full-time football – they took a punt on me from non-league. I had some great memories there going up from the Conference into League Two. I’ve been with some different managers there playing football, going long, but the fans were always really good there. It’s a nice community based club who like to get their fans involved. The way they’ve played this season and the squad they’ve got, they deserve to be where they are. The chairman has backed it and backed the managers who have been there – Steve Evans and [David] Flitcroft who is there now – and I can’t say anything bad about the club. The way they play and the squad that they’ve got they deserve to be up there and I hope they get promoted this year.

How did that move from Hednesford come about? It must have been nice to be picked up by a Conference Premier club who were not middle of the road, but a top Conference club?

At Hednesford we played them most pre-seasons and I think they spotted me there. I got released from Crewe when I was 20 and had a couple of years at Hednesford enjoying my football again. The season I went I scored 17 goals from midfield and I think playing them pre-season was a big thing – their captain at the time, Adam Murray, he then went to be assistant and I think that was a big part of me moving – as well as the assistant before him. It was good to get into full-time football and going to a team like Mansfield was a no brainer for me. 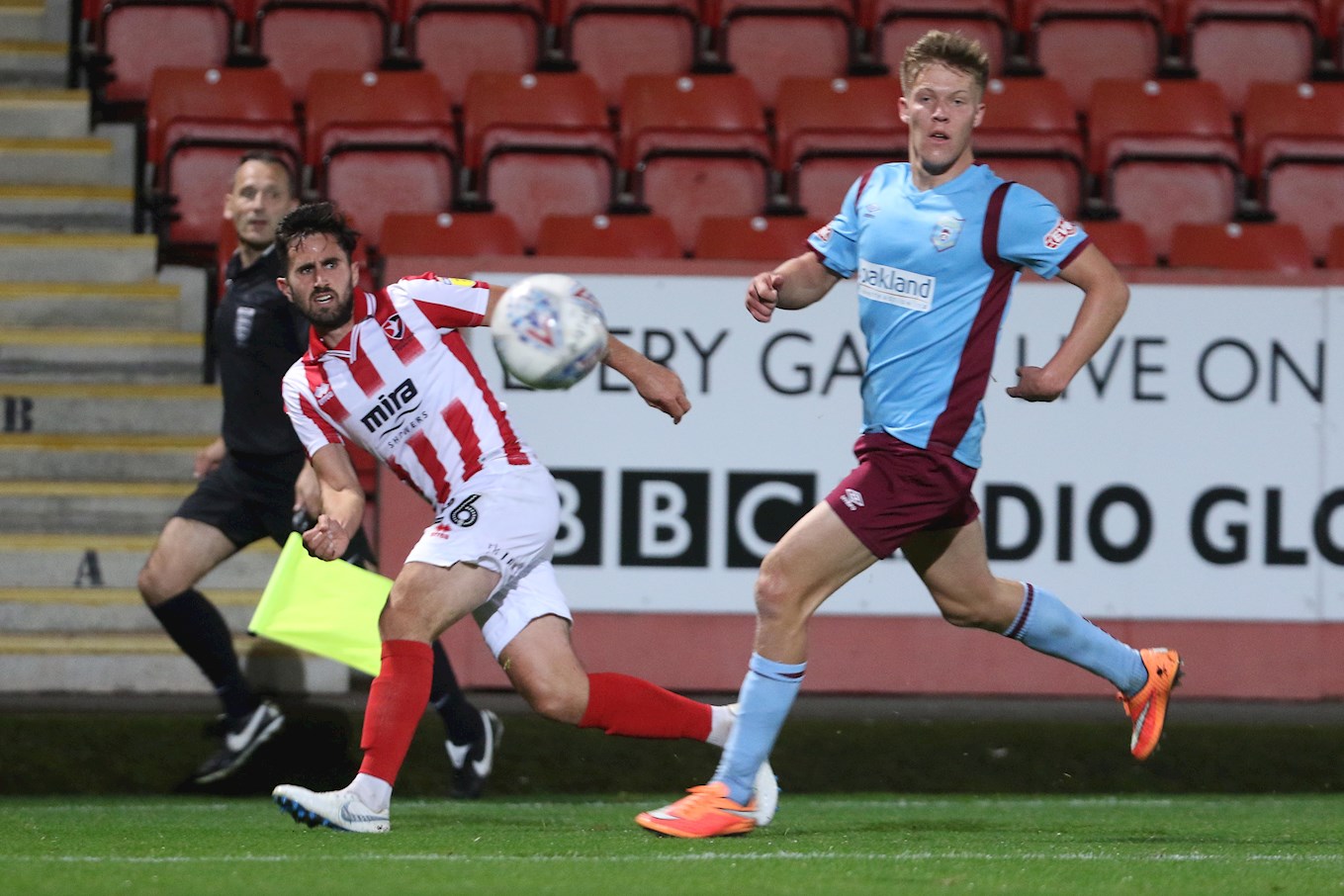 The names you mentioned are very experienced lads – the likes of Matt Rhead and Matt Green – obviously Rheady is at Lincoln now and will play tonight. They are big characters, big players, and it was good to be there to win the league. To win any league is an experience in itself. I’ll always remember Hereford away when we had to win and I think Greeny scored in the last minute. It was a good way to go up and the experience on the day for the chairman, the club and the fans was brilliant.

There were big characters on the pitch and off it too – chairman John Radford has been very supportive of the club and managers like Paul Cox you worked with are big personalities as a manager. What was it like being around those big personalities?

You need those big personalities to take a club further and upwards. The chairman has been a massive contributor to that – the manager he brought in with Steve Evans was the turning point where he decided to pump money into it and improve the team and the club and make it more professional I believe. To be fair it has worked wonders for them with the squad they’ve got. I think they’ve just had a new training facility built and it’s only on the up for them.

This Saturday it’s Northampton up next. We’ve got a fantastic home record, they’re the most in-form team in League Two right now, there’s something about that which suggests it’s going to be a real tense occasion?

Hopefully it’s not a boring 0-0! Us at home are always confident. Northampton are a big club and in form at the minute but we struggle to see us losing at home with the way we play, the way the pitch plays, we’re going to go into it ultra-confident and we just need to perform to the best of our ability and I believe that will bring us the three points on the day.