It's 20 years since the club were first promoted to the Football League in 1999 this year, and throughout the season club secretary Paul Godfrey has been detailing some of the key matches that saw Steve Cotterill's side clinch the Football Conference championship in the club's matchday programme. On the anniversary of that famous promotion winning night against Yeovil Town, Paul looks back on a huge milestone in the history of the Robins.

After the disappointment of missing out on a second successive Wembley final there was no time to dwell upon what might have been. Only three days later the Robins were pitched into local derby action against Forest Green Rovers needing another league win to edge themselves closer to the one coveted promotion place.

The team returned to something like their best form and took the lead when a shot from Neil Grayson bounced back off goalkeeper Steve Perrin for Dennis Bailey to tap in. Perrin redeemed himself with a series of good saves after that but the Robins were pegged back 10 minutes from time when Matthew Coupe drove a shot through a crowded penalty area to make it 1-1.

However, there was good news from elsewhere as rivals Rushden & Diamonds were held 0-0 at home by Kingstonian meaning that a win over Yeovil Town two days later on the Thursday night would hand Cheltenham the title.

The match took place on a lovely sunny Spring evening and the ground was jam packed long before kick-off with children placed in front of the perimeter walls, a move that would never be allowed today!

It turned out to be an absolute monster of a game, one of the best seen at Whaddon Road for many-a-year and even referee Andy Penn later described it as the best match he ever took charge of.

Visitors Yeovil shocked the home crowd with a goal through Owen Pickard - a former Cheltenham transfer target - after 80 seconds but it took only two more minutes for Cheltenham to hit back with a scrambled effort from Jamie Victory.

On 21 minutes Neil Grayson fired in a bullet header to make it 2-1 but Yeovil started the second half strongly and drew level from a Warren Patmore penalty.

After that it was pretty much one-way traffic with wave after wave of Cheltenham attacks, each one crashing against the robust Green defence or thwarted by a remarkable goalkeeping performance from Tony Pennock. 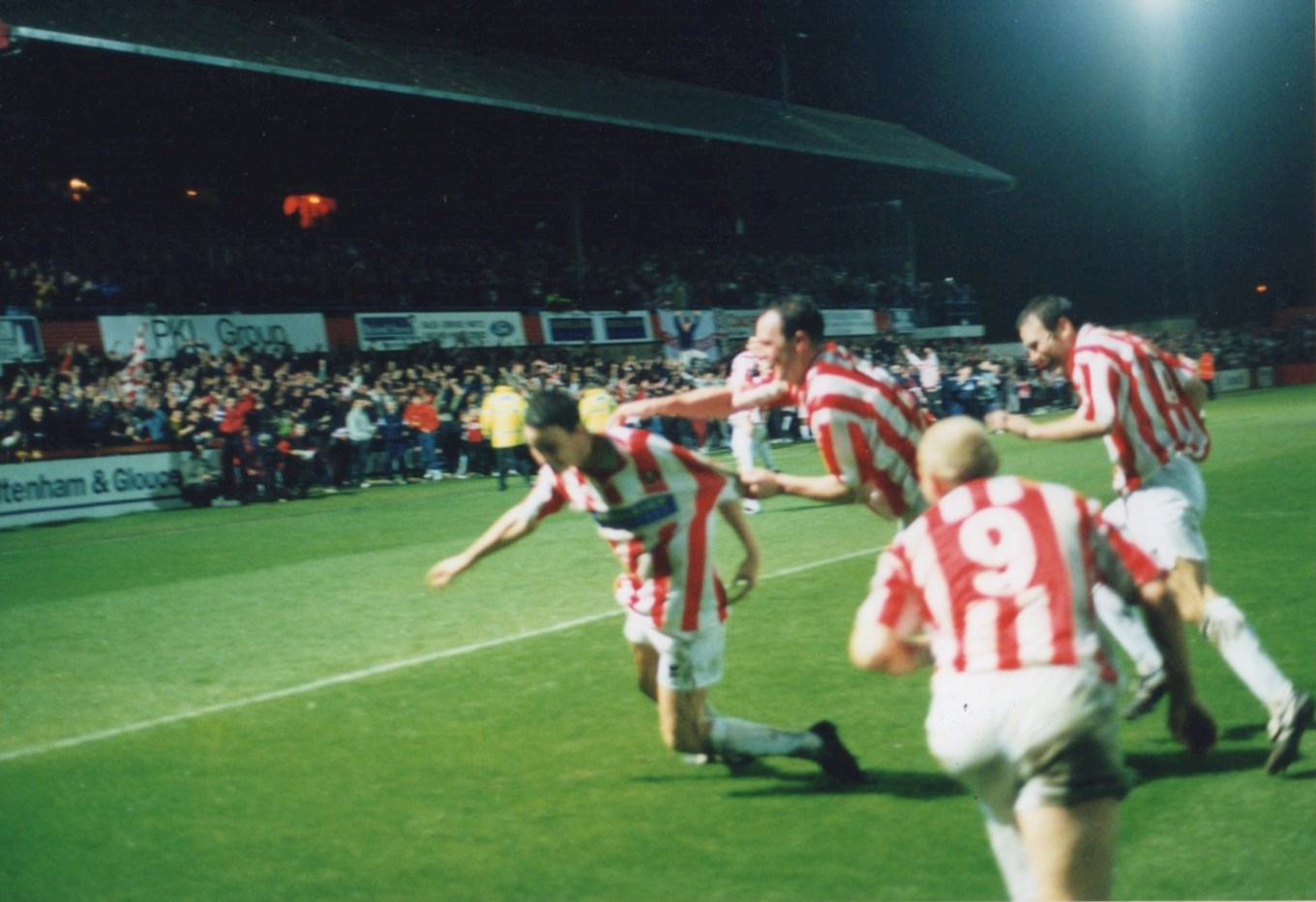 Seven minutes of injury time had ticked by when Cheltenham won a free-kick in a remarkably similar position to the one that had brought the goal at Wembley almost 12 months earlier. Shurdington's own Keith Knight delivered it, someone headed it downwards and it bounced beyond the seemingly impenetrable Pennock and nestled beautifully in the corner of the net. Absolute pandemonium ensued followed by a raging debate about who scored it.

The press originally credited Mark Freeman but it definitely wasn't him. Both Victory and Michael Duff claimed it but we think the answer was provided by a press photograph that emerged the following day.

Victory jumped, leaning back, and the ball may have grazed his forehead but Duff crashed in from above and behind him to power the ball downwards. Quite cool, really, that 20 years on from that night he's now our manager...