A huge test awaits Michael Duff’s Cheltenham Town side on Saturday when they make the trip to Sincil Bank to take on champions elect Lincoln City (kick-off: 3pm).

It’s all set to be a full house at the home of the Imps this weekend with Saturday’s opponents requiring a win to confirm their promotion to League One.

Back-to-back wins over Northampton and Crewe, plus a draw last time out against play-off chasing Exeter City, has seen the Robins enter a good run of form leading into Saturday’s clash.

Any kind of result at Lincoln will be a huge positive for Duff's men, who will then head into the Easter period with four games still left to come.

A call will be made on Luke Varney’s availability after he was carried off in last week’s draw with Exeter.

Tyrone Barnett’s calf problem rules him out and Nigel Atangana also misses the game as he continues his recovery from a ruptured achilles. Alex Addai is edging closer to fitness but is unlikely to feature.

Sean Long will be looking to play a part against his former team having featured as a late second half substitute in last weekend’s draw.

Watch what Michael Duff had to say ahead of Saturday’s game here on iFollow.

A huge 2-0 win at Stadium MK last week has steered Lincoln into pole position to claim the League Two championship this weekend. It’ll be their second league title in the past three years after they were crowned National League champions in 2017.

The Imps amazing rise under the Cowley brothers, boss Danny and assistant Nicky continues at a pace, and they’re all but set to look forward to League One football next term. Having lost only four times in the league this season, and having registered 23 wins, it’s of little surprise that they followed up their play-off finish last term with a campaign such as this one this time round.

Since Cowley was appointed manager alongside his brother in the summer of 2016, he has steered Lincoln out of the non-league sphere with an FA Cup quarter final and Checkatrade Trophy win coming at the same time. Just over a decade ago they started in charge of Concord Rangers in the Essex Senior League – the same level local side Bishop’s Cleeve operate at. 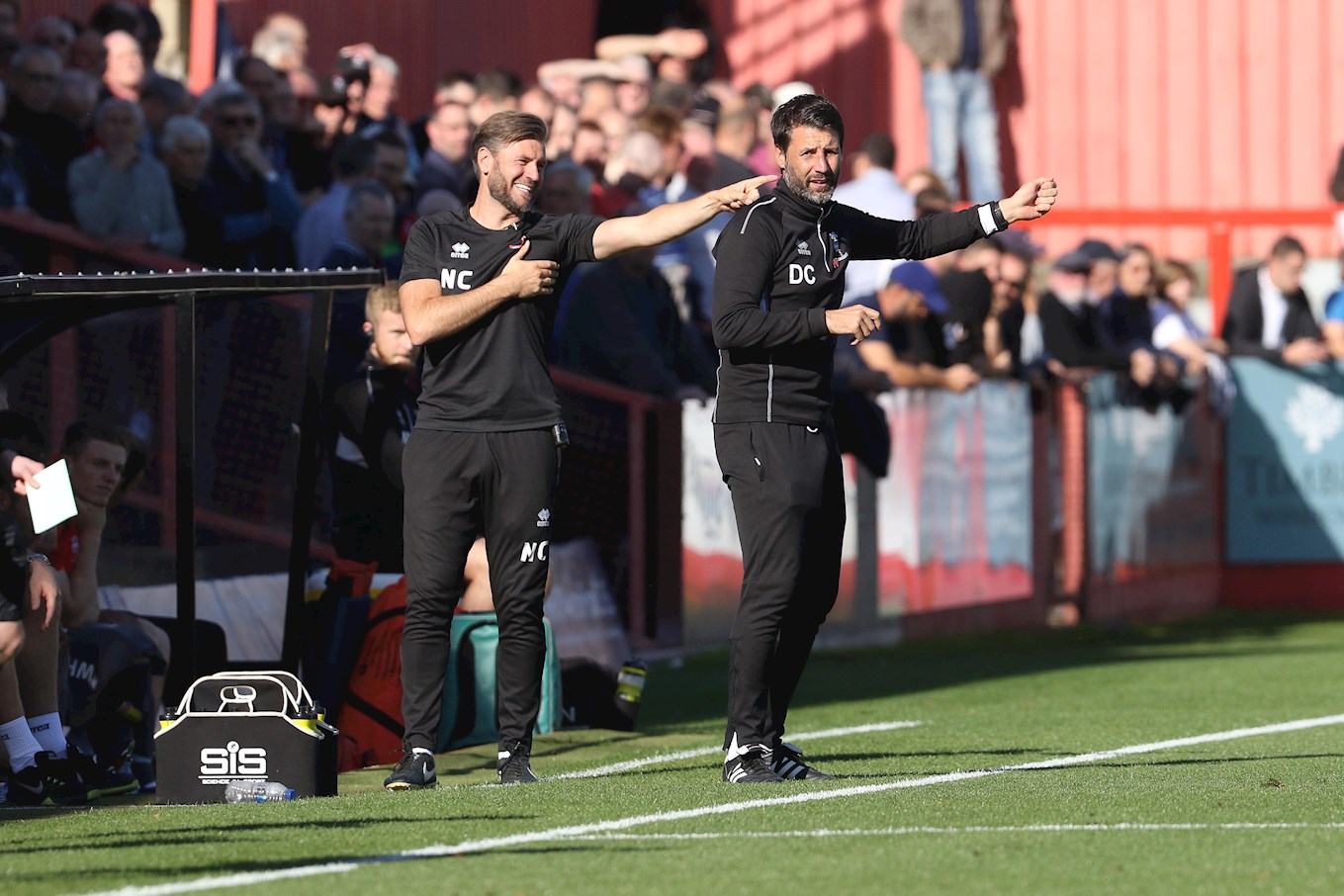 They’ve gradually improved their player roster in their time at Sincil Bank and have put together a squad with plenty of strength in all departments. John Akinde’s 17 goals sees him top their goal scoring charts, while the lively Bruno Andrade’s 11 goals have also been key.

The experience of Michael Bostwick, goalkeeper Matt Gilks, Jason Shackell and Wales international full back Neal Eardley balance nicely with the energy provided by up and coming talents such as Harry Anderson, Bradford City loanee Shay McCartan and Harry Toffolo.

At Sincil Bank they have the fifth best home record in the division though have lost a league game at home just once this season – that was back in September against Crawley.

Heading into Saturday’s encounter they are unbeaten in League Two since Boxing Day, when Crewe Alexandra claimed a 2-1 win at their Gresty Road home against the Imps.

Looking back over previous battles between the two clubs it’s Cheltenham who possess the better record. The Robins have won 12, lost six and drawn four from meetings that stretch back to an FA Cup tie at the Jonny-Rocks Stadium back in 1998.

When the two met earlier in the season it was in late September when Lincoln clinched three points with a 2-0 win. It was goalless between the two sides until the final quarter of an hour when a Craig Alcock own goal, and Shay McCartan finish wrapped up the points for the Imps.

October 2017 was the last time Cheltenham came out on top with a 1-0 win. That day a Danny Wright first half strike was the difference in Lincoln’s first season back in League Two.

The supporters coach heading to the game leaves from the Jonny-Rocks Stadium at 9.30am.

The match is an ALL TICKET game with a large attendance expected.

Making the journey in support of the Robins? Check out Lincoln's useful away supporters guide online here.

Stay tuned in to events at Sincil Bank by following @CTFCofficial on Twitter. You can catch the team news, match updates and live photos on Twitter. Updates will also be available on the club’s Facebook page.

After the game check out the club website to read a match report and hear from boss Michael Duff and a member of the squad on the final result.

Listen to commentary by tuning in on iFollow or on BBC Radio Gloucestershire.