This weekend the Former Players Association has invited back fan favourites John Finnigan and Shane Duff to the Jonny-Rocks Stadium.

Here we take a closer look at their careers ahead of their return to the ground where they made more than 400 appearances with three promotions between them.

Defender Shane Duff was almost a one-club man during his professional career having spent 10 years at Cheltenham Town.

The younger brother of manager Michael Duff, Shane joined Cheltenham Town straight from school and spent a year in the youth team playing in the Gloucestershire County Youth League before being offered a professional contract in 2000. A tall, strong central defender who could also play at left-back, Duff spent the next two and a half seasons as a regular for the reserves and put in some impressive performances during his first taste of first team football on loan to Evesham United in 2001.

Duff was considered ready for first team football mid-way through the 2002-03 season in Division Two and manager Graham Allner sent him on for two substitute appearances in late December. Following Allner's departure from the club Duff made his first start for the caretaker management team of Mark Yates, Bob Bloomer and Chris Banks on the left of a three man central defensive combination as the Robins were beaten 2-1 away to Cardiff City.

New manager Bobby Gould made him a regular selection in the centre of defence alongside his brother in the closing weeks of the season and despite the team's relegation back to Division Three, the partnership was retained for spells during the following season until Michael departed for Burnley in the summer of 2004. Duff scored his first goal for the club in the final match of the 2003-04 season to earn a 1-1 draw with Huddersfield Town, thereby denying the Terriers promotion and sending Torquay United up instead.

Duff’s performances during season 2004-05 earned him the club's Player of the Year award and established him as a first choice player. Despite missing four months of the 2005-06 campaign through injury, he still made telling contributions as Cheltenham won promotion to League One via the play-offs.

Unfortunately injuries were to become a recurring theme for Duff over the next four years, although he managed to appear in nearly two thirds of the matches during both 2006-07 and 2007-08 as Cheltenham retained their status in League One during the latter part of each season.

The 2008-09 campaign was one to forget for both Duff and the club. Relegated in the 23rd placed team in League One, the Robins were also denied his services for long periods due to a persistent ankle problem,
although he returned to perform with admirable spirit and determination in the closing weeks.

He began the 2009-10 campaign in the team but again missed the middle part of the season through injury and was released at the end of the season by manager Mark Yates following his testimonial game between Cheltenham Town and an All Star XI of former Robins players.

A tall, commanding centre-back with leadership qualities, it can only be speculated as to how well Cheltenham Town might have done if Duff had been able to play as consistently as his brother or Jamie Victory. Nevertheless, League Two rivals Bradford City were all too aware of his abilities and he moved to Valley Parade for the 2010-11 season before taking a break from football to concentrate on developing a career after the game.

A persistent back injury prevented Duff from playing in semi-professional football and he embarked upon a degree course while offering soccer schools to children in the Cheltenham area. In March 2003 Duff was selected for the Northern Ireland under-21 squad for the away match in Armenia in March 2003 and made his only appearance at international level for the Under-21 team three months later against Spain in Lurgan.

Also a talented cricketer, Duff appeared as a wicketkeeper-batsman for Shipton-under-Wychwood in the 2002 National Village Knockout final at Lord's. 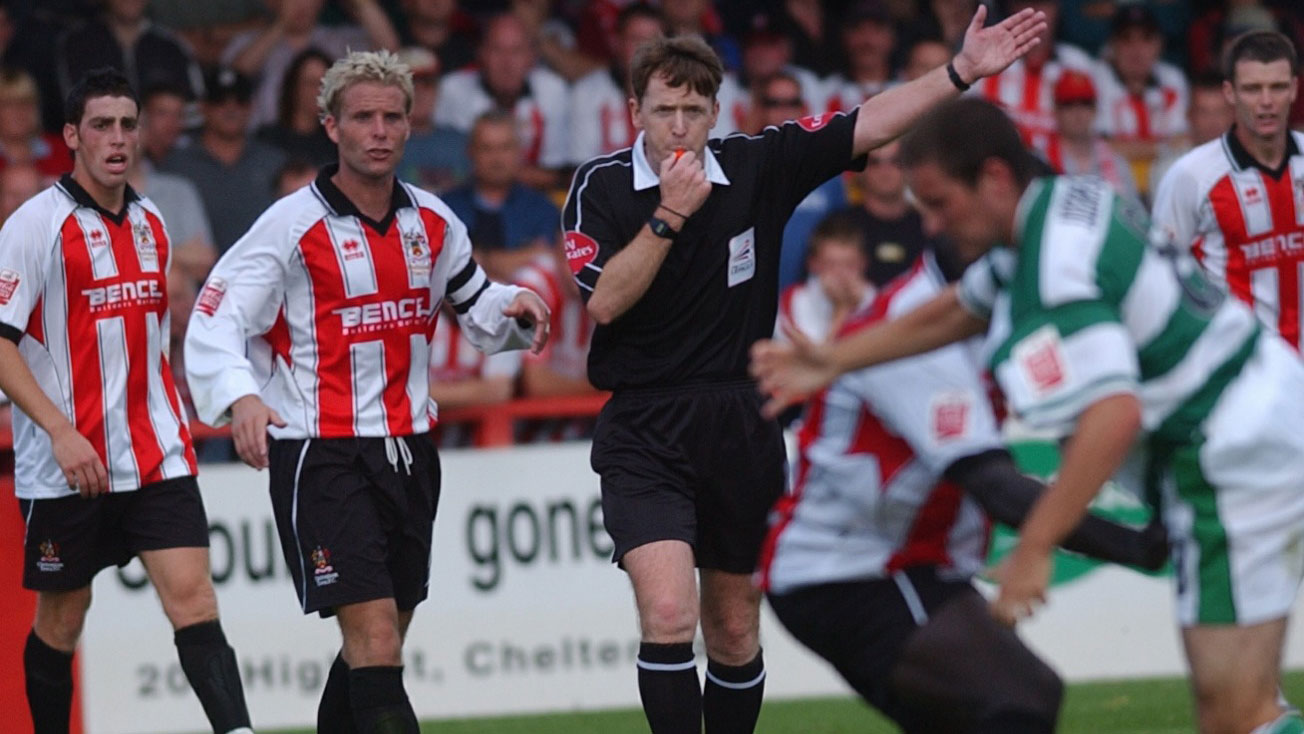 The only player to appear for Cheltenham Town in the play-off finals of both 2002 and 2006, John Finnigan was a fixture in the heart of the Robins' midfield for seven years. Finnigan began his career as a Schoolboy at Nottingham Forest, first signing for them at the age of 15 in 1991.

He went on to spend nearly seven years at the City ground as a schoolboy, trainee and professional and among his contemporaries at the club were Steve Guinan and Craig Armstrong, both of whom played alongside Finnigan for Cheltenham Town.

He signed professional for Forest in 1995 and played under Brian Clough, Stuart Pearce, Frank Clark and Dave Bassett without making any appearances for the first team. Finnigan was loaned to Division Three Lincoln City on transfer deadline day in March 1998 and arrived in time to help them win promotion to Division Two that season.

He made his Football League debut in a 1-0 defeat at Macclesfield Town at the start of April and made six appearances in the closing weeks as Lincoln finished in third place. The move was made permanent with a free transfer over the summer of 1998 and Finnigan went on to spend a further three and a half seasons with the Red Imps.

Lincoln were relegated back to Division Three in season 1998-99 but Finnigan established himself as a leading performer in the centre of midfield making over 40 appearances. His first appearance at Whaddon Road took place that season in the FA Cup first round, Lincoln winning 1-0 and going on to reach the third round stage where they were defeated by Sunderland.

Finnigan was appointed club captain at the start of the 2000-01 season and remained at Sincil Bank until March 2002 when a financial crisis at the club forced them to part with some of their senior players. Cheltenham Town manager Steve Cotterill, having just lost Lee Howells to a broken leg suffered in a match at Bristol Rovers, moved quickly to sign Finnigan as his replacement and he scored on his debut for the Robins against York City.

He was ever-present for the rest of the season as Cheltenham narrowly missed out on automatic promotion and went into the Division Three play-offs. He scored the fourth penalty of the semi-final second leg shoot-out against Hartlepool United and hit the third goal in the final against Rushden & Diamonds to seal promotion. Finnigan nearly left Cheltenham Town in the summer of 2002 when the club came close to signing Grant McCann, although the move fell through and he signed an extended contract at Whaddon Road for new manager Graham Allner.

A hard working midfielder with the ability to run all day, covering ground all over the pitch to win and distribute the ball, Finnigan was given his first few games as captain during 2002-03 in the absence of Mark Yates and was voted Players Player of the Year as the Robins narrowly failed to avoid relegation back to Division Three. He was given the captaincy on a permanent basis by John Ward in 2003 and he went on to become a highly influential and consistent performer as Ward built a young team for a tilt at promotion in 2005-06.

That season the club reached the fourth round of the FA Cup and Finnigan put in a particularly impressive performance against Newcastle United in the live televised match at Whaddon Road. He led the team into the play-offs that season, scoring in the semi-final first leg at Wycombe Wanderers and putting in a characteristically hard-working performance at the final in order to lift the trophy. The following season he drove the midfield forward towards League One survival and the club management were delighted to secure him on a new three year contract in the summer of 2007.

However, 2007-2008 was a frustrating season as Finnigan managed to rack up only 11 first team starts and a persistent heel injury forced him to watch from the side lines. He underwent further corrective surgery at the end of the season and made a goal-scoring return to the first team in December 2008 after 14 months out of action.

Finnigan continued to toil away in the midfield battleground for the remainder of that season as Cheltenham were relegated to League Two and at the end of the season, with manager Martin Allen wanting to make another set of wholesale changes to his squad, he reached a settlement with the club over the remaining year of his contract.

Upon leaving Cheltenham Town Finnigan signed for Kidderminster Harriers in the Conference, playing for his former Cheltenham midfield partner Mark Yates, and was appointed caretaker then assistant manager when Yates departed for Cheltenham Town in December 2009. He helped his new team to reach the FA Trophy semi-finals in 2010 but began to suffer with further injuries later that year and departed Kidderminster in October.

Finnigan went to work at the newly created Winchcombe Sports Hub while playing in the Southern League for Bishop's Cleeve, later joining Hellenic League side Shortwood United in October 2011. He made a welcome return to Cheltenham Town in July 2016 in the role of commercial manager.