To mark 100 years since the end of the First World War, The Royal British Legion is leading a national movement to say ‘thank you’ to the entire generation who lived through the war, served, sacrificed and changed our world.

The charity is calling on the public to remember not only the British and Commonwealth Armed Forces who lost their lives, but also those - military and civilian - who played their part on the home front and those who returned to build a better life for the benefit of generations to come.

The war left legacies that positively impact our lives today, from ground-breaking social change and timeless works of art to pioneering innovations.

Everyone has a reason to say ‘thank you’. We all have a connection to the First World War and this is an ideal time to find out more about our heritage. 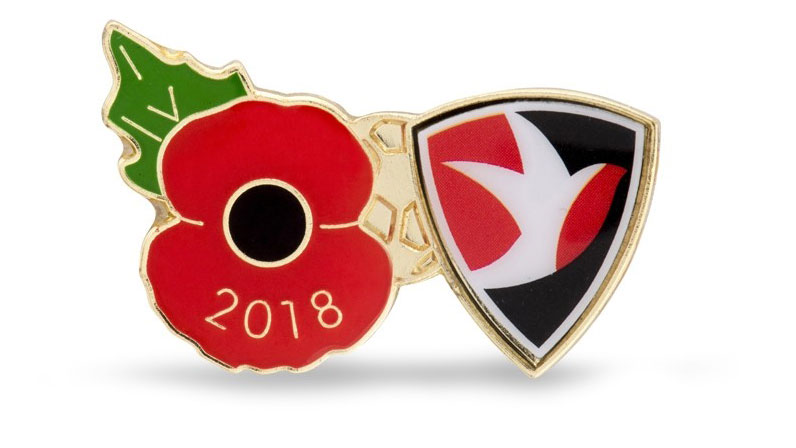 And that includes Cheltenham Town. Representatives from the club recently visited some of the cemeteries and memorials in northern France to say 'thank you' to four former Robins from the 1913/14 side who made the ultimate sacrifice.

We will be telling their story in the lead up to the home match against Mansfield Town on Saturday 3 November, when the British Legion will be joining us to commemorate the fallen.

A special poppy lapel pin badge, featuring the poppy and club crest (pictured above), has also made to say 'thank you' and limited stocks are available to buy in the club shop from today.

They are priced £3 with every penny going to The Royal British Legion.